A large bull elephant has been shot dead by a Russian trophy hunter in Zimbabwe despite wearing a research tag.

The elephant, known as a tusker for the size of his tusks, was killed on March 7, around 5km outside the Gonarezhou National Park in the country’s south west.

While it is not illegal to shoot animals wearing tags, it is considered unethical. The hunters claimed not to have noticed the tag until after the animal was dead.

It comes after Cecil the lion was killed by hunter Walter Palmer in Zimbabwe in July 2015, despite also being tagged by researchers.

A Russian trophy hunter killed a large male elephant just outside the Gonarezhou National Park in Zimbabwe earlier this month despite it wearing a research tag. Pictured is the dead elephant alongside hunt leader Martin Pieters. The Russian has not been identified

Martin Pieters, chairman of the Zimbabwe Professional Hunters and Guides Association, was leading a legal 14-day excursion near Gonarezhou when the killing happened, Africa Geographic reports.

Pieters and his Russian client, who has not been named, were with his unarmed friend, two trackers, a park ranger and a local council representative when they picked up the elephant’s tracks on day six of the expedition.

The group began tracking the animal before finding it standing in thick bush, meaning they were not able to see the male in its entirety.

However, Pieters was able to see the elephant’s large tusks and ordered his client to shoot, the Zimbabwe Professional Hunter and Guides Association says.

‘It was only after approaching the elephant on the ground that the tag was noticed,’ the statement says.

The male had been tagged inside the national park but had wandered outside the unfenced boundary into an area known as the Naivasha Community Conservancy, which has been set aside for hunting by locals.

The bull had been in the area since around February 20. Pieters had not been made aware of this fact, the statement says, but adds that he had not checked either.

‘This was a genuine mistake due to a lack of communication,’ the statement says.

Asked by Netwerk 24 about the loss of the elephant, Mr Pieters said: ‘It does not matter, the hunt was completely legal.’

The tag belongs to the Frankfurt Zoological Society which collared elephants in the park in 2009 and again in 2016. It is not clear precisely when this male was collared.

A statement from the society says: ‘A collared bull was shot on a legal hunt in Naivasha in the first week of March. 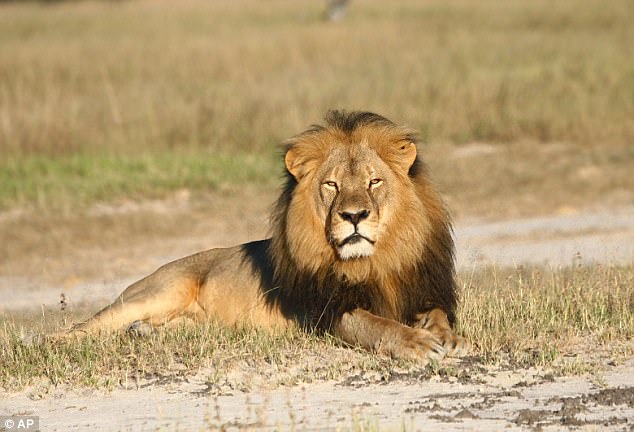 Cecil the lion was also wearing a research collar from Oxford University when he was shot and killed near Hwange National Park, also in Zimbabwe 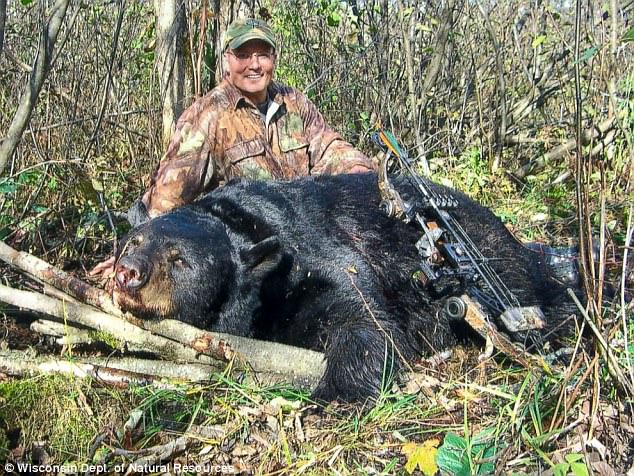 ‘There is no law that protects a collared animal from being hunted in Zimbabwe, but there is general acceptance that the ethical position is that a hunter will avoid shooting an animal with a collar.

‘The data from this bull has been captured and will help us with our ongoing efforts to find solutions, together with our local and international partners, to conservation questions in a world where the challenges to find space for wildlife and their habitats are becoming ever more complicated.’

In 2015 there was an international outcry when Palmer shot Cecil, a famous collared lion in one of Zimbabwe’s other national parks, Hwange.

The 13-year-old, who had an unusual black mane, was wearing a tracker fitted by a researchers linked to Oxford University.

Last year, one of Cecil’s cubs, Xanda, was also killed by a hunter, very close to the spot where his father died.

Palmer was forced into hiding for weeks following his shooting of Cecil which prompted an international outcry.

Charges against Dr Palmer and his professional hunter were withdrawn after the hunt of Cecil was ruled to have been legal.

‘Tusker’ is a term used to refer to particularly large male elephants carrying a lot of ivory, with many of their tusks reaching down to the ground.

Because they carry so much ivory they are a prime target for poachers and have become extremely rare, with as few as 25 left in the whole of Africa, according to National Geographic.

Female elephants tend to prefer mating with older, larger males, meaning that tuskers are seen as vital to conservation efforts.

Their age and experience are also vital to teaching younger elephants and preserving herd balance, since elephants are a highly social species.