A huge ‘multi-coloured’ meteor streaked over the sky above millions of Britons last night – coinciding with a historic space launch in Cornwall.

Stargazers across England were left dumbfounded by the impressive natural phenomenon, which lit up the night sky on Monday.

The blazing fireball was spotted soaring over London, Sussex, Wilshire, Hampshire, Dorset and Devon – with some as far north as Wolverhampton, near Birmingham, reportedly seeing it.

The meteor was first seen shortly after 8pm, the Met Office said. Amazing video footage shows the shooting star erupting into a ball of flames as it burnt up in the atmosphere.

DID YOU FILM THE METEOR EMAIL TOM.COTTERILL@MAILONLINE.CO.UK

The stunning shooting star was spotted across England as it burnt up in the night sky. This security camera in Wolverhampton captured the moment it soared over the city

The Met Office tweeted: ‘Reports of a meteor in the sky over the UK just now. If you managed to take any footage we’d love to see it’.

People took to social media to post footage they’d captured of the rare event – many on video doorbells or home CCTV systems.

One skygazer in Bristol captured the meteor on a Nest CCTV camera at around 8.01pm – as it headed east.

The meteor was so bright it startled stargazer Sophie Green – who feared the ‘world was ending’.

‘I saw it over Balham south London. Bright orange, so low, honestly thought it was a firework initially then I thought ‘the world is ending’. Grateful to have seen it,’ she tweeted. 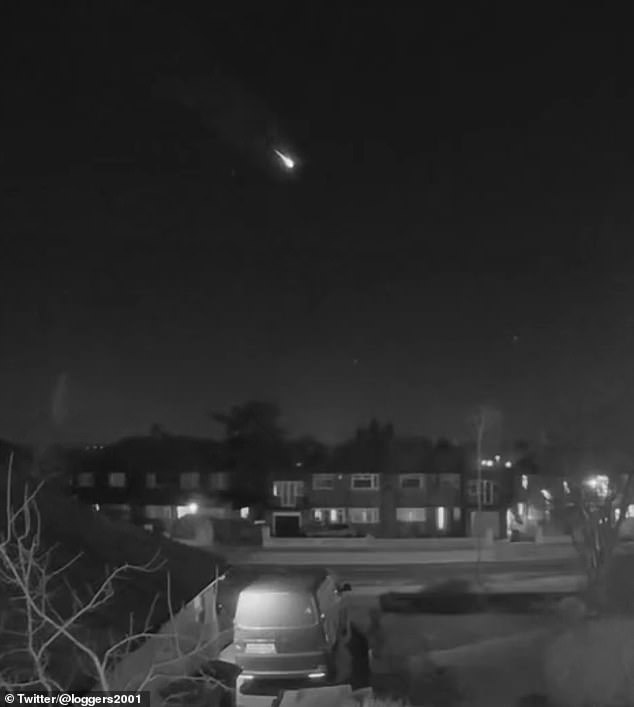 The huge meteor was first spotted shortly after 8pm on Monday evening, with people nationwide sharing clips from their doorbell cameras 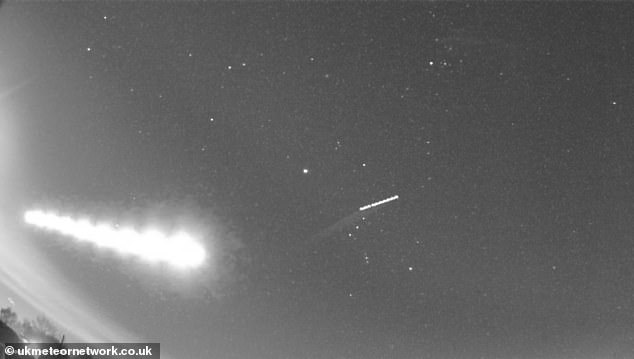 In one video, the meteor can be seen streaking through the sky, passing over a plane as it burns up in the atmosphere.

One woman from Chippenham, Wilts., said: ‘I couldn’t believe it. I was standing outside waiting for a lift to work when the sky lit up.

‘A bright orange ball flew through the sky – it was incredible.’

Another person said: ‘It wasn’t just a shooting star, it was orange in the sky!!’

Elsewhere, one woman said she ‘had just turned my computer off and looked up out of the window’ before spotting an object streaking across the sky, adding: ‘It was perfect timing.’ 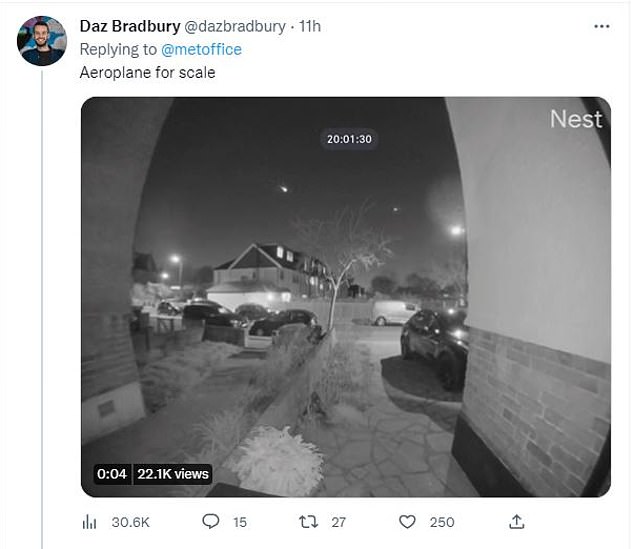 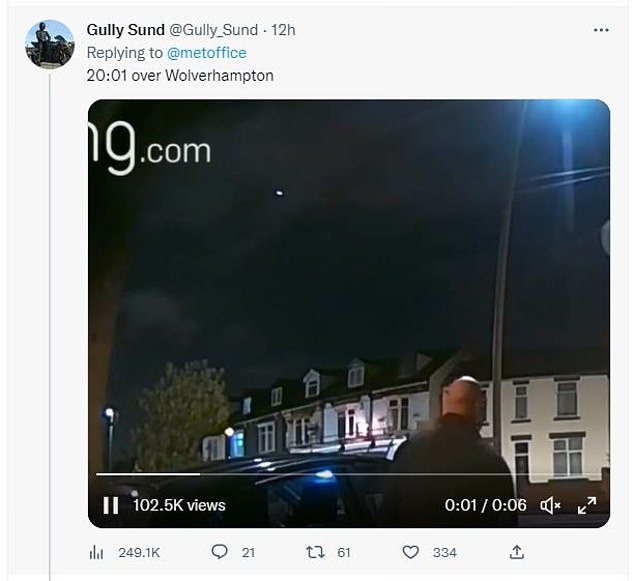 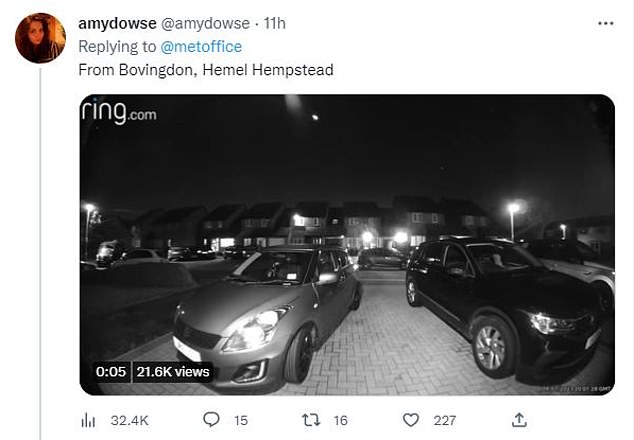 Sightings poured in from across London, Hertfordshire and Wolverhampton, among others.

Laura, who did not wish to give her surname, from Rickmansworth in Hertfordshire, caught the flying object on camera at around 8pm from her front room.

Her video showed a light streaking through the sky above a residential area for just under 10 seconds before disappearing from view.

She told the PA news agency: ‘I had just turned my computer off and looked up out of the window, it was perfect timing.

‘It wasn’t like a shooting star I have seen in the past. It seemed overwhelmingly close.

‘It was large in the sky, orange with an orange blaze behind it, not what I would describe as a long shooting star tail but a shorter orange one.

‘Then it just disappeared… Popped out of the sky. It seemed like it hadn’t really happened. I tried to tell my husband but they didn’t quite believe my account!’ 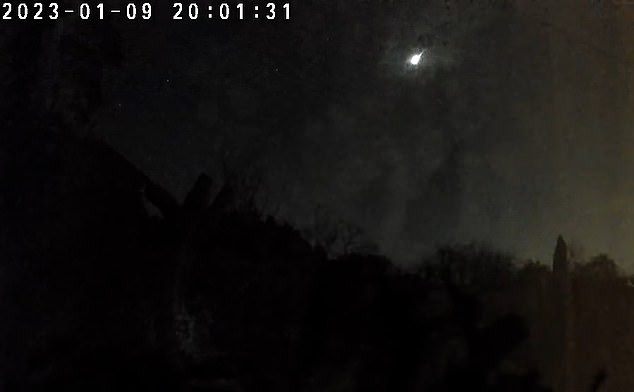 Sightings were reported from London to Devon and up to Birmingham. Footage of the meteor showed it blazing through the atmosphere for several seconds before disappearing 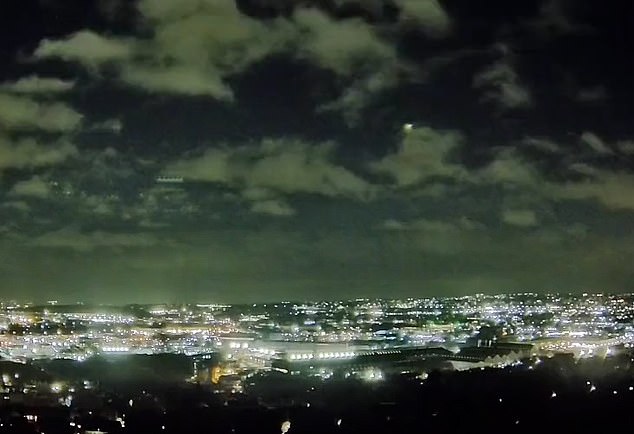 A Met Office spokesman told PA the time of day and clear skies contributed to the quality of the sightings.

The spectacular natural phenomenon comes on the same night a modified Virgin Boeing 747 took off from Newquay Airport, with a 21m LauncherOne rocket attached to its wing.

But the Virgin Orbit mission to deploy satellites into space failed after an ‘anomaly’ prevented the rocket from reaching its destination height.

In chaotic scenes the team behind the ambitious first UK launch announced they had succeeded in reaching orbit. But then moments later they said an ‘anomaly’ had actually stopped the LauncherOne getting far enough into space.

It was thought history would be made in the UK on Monday night as the first-ever orbital space launch took off from Cornwall just after 10pm.

British astronaut Tim Peake branded the mission’s outcome as ‘disappointing’ and said: ‘Getting to space is hard and valuable lessons will be learned.’ 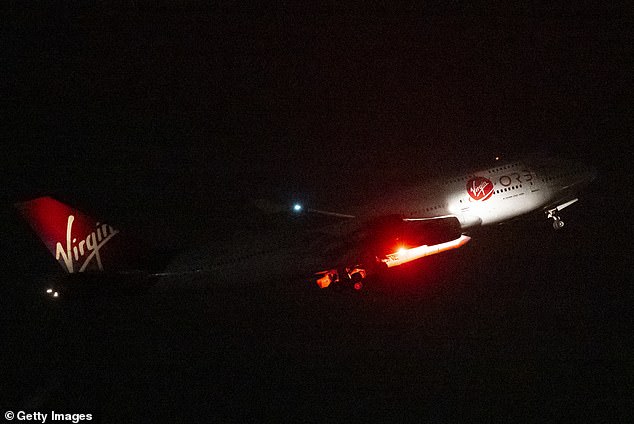 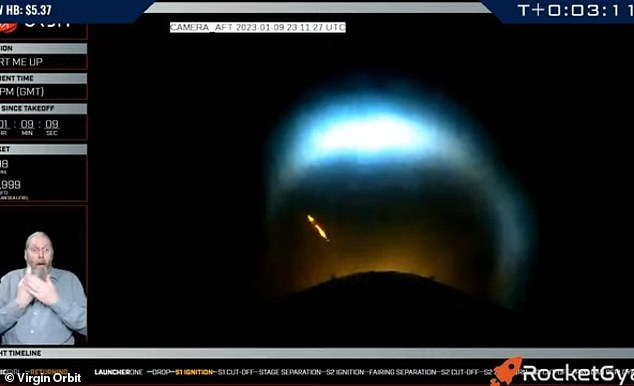 The rocket was successfully released from the jumbo jet at 35,000 feet (around 10,000 meters) over the Atlantic Ocean to the south of Ireland at 11.10pm 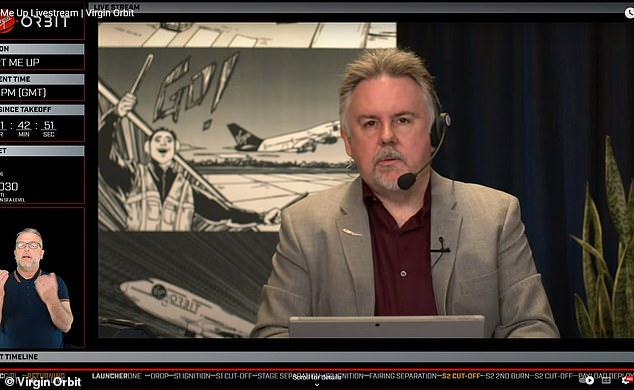 But Virgin Orbit announced the rocket failed to reach its destination height on Monday night. Officials are pictured sharing the devastating news

British astronaut Tim Peake branded the mission’s outcome as ‘disappointing’ and said: ‘Getting to space is hard and valuable lessons will be learned’

Matt Archer, from the UK Space Agency, said the second stage of the launch suffered an ‘anomaly’, the cause of which was under investigation.

‘In effect the rocket has not reached the required altitude to maintain its orbit or deploy the satellites and therefore the mission was unsuccessful,’ he told reporters at Spaceport Cornwall.

‘Over the coming days, there will be an investigation involving the Government and various bodies, including Virgin Orbit, to make sure we understand what caused that technical failure and again we’ll work out what to do next following that.

A repurposed 747 jumbo jet – named Cosmic Girl by Virgin – took off from Newquay Airport at 10.02pm on Monday, after all the commercial flights had ended.

Viewers whooped and danced to Start Me Up by the Rolling Stones as the jet took off, with people climbing onto each other shoulders to see the launch.

Named in tribute to the Stones’ 1981 hit, the mission involves a repurposed Virgin Atlantic Boeing 747 and Virgin Orbit’s LauncherOne rocket.

The 747, dubbed Cosmic Girl, took off horizontally from the new facility while carrying the rocket under a wing. 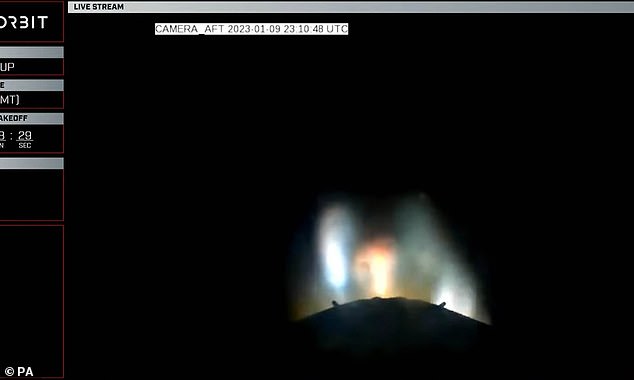 A video grab taken from the live feed of Virgin Orbit of the Virgin Orbit’s LauncherOne rocket after it was launched from a repurposed Virgin Atlantic Boeing 747 aircraft, named Cosmic Girl, at 35,000ft over the Atlantic Ocean to the south of Ireland, as part of the Start Me Up mission and the first rocket launch from UK 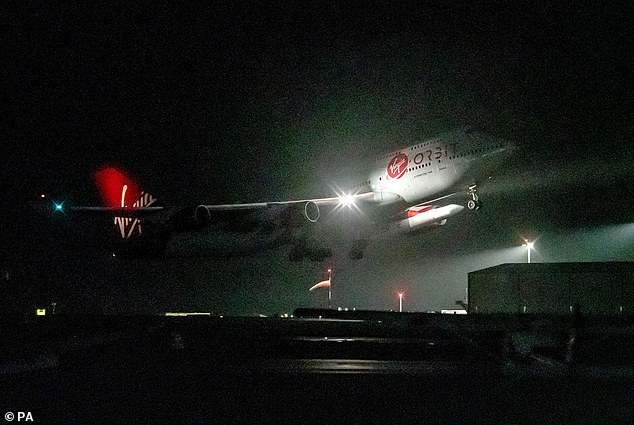 The rocket was successfully released from the jumbo jet at 11.10pm over the Atlantic Ocean to the south of Ireland at 35,000 feet (around 10,000 meters).

The rocket was carrying nine small satellites meant for UK defence monitoring, while others were for businesses such as those working in navigational technology.

In a series of tweets, Virgin Orbit said: ‘We appear to have an anomaly that has prevented us from reaching orbit. We are evaluating the information.

‘As we find out more, we’re removing our previous tweet about reaching orbit. We’ll share more info when we can.’

Melissa Thorpe, head of Spaceport Cornwall, told reporters: ‘I’m not going to lie, it’s gutting – we all heard at different times, so once we all got together, there were tears, and it was very upsetting.‘