Is this Australia’s unluckiest punter? Huge NRL upset costs gambler an astonishing $888,000 win on a 15-leg multi bet that cost him just $5

Every punter has done it – chucked a lazy fiver on a multi-leg bet in a long-shot bid to win huge amounts of cash.

But spare a thought for this poor bloke who came within a single leg of turning $5 into almost $1million – only for Parramatta to let him down.

The punter put together a 15-leg multi and picked the first 14 selections correctly, including a multi-within-a-multi selection based on how NBA star Jayson Tatum and the Boston Celtics would perform, along with picking Collingwood to upset the Melbourne Demons in Monday’s match.

Some of the other selections included the North Queensland Cowboys to smash the St George Illawarra Dragons by 13 or more points in the NRL and for Carlton to crush Essendon in the AFL by 25 points or more.

It all came down to Parramatta beating the Bulldogs by 13 or more points on Monday, which most would have considered to be one of the safest legs in the multi.

Parts of the 15-leg multi bet that only needed the Parramatta leg to get up for the punter to collect almost $880k. Sportsbet has confirmed the bet is genuine

The bet was lodged with Sportsbet, who confirmed that it was legitimate.

Prior to the match, the Bulldogs had scored just 29 tries in 13 matches and averaged just 2.2 tries a match. In contrast, the Eels had scored 52 tries at an average of four per match.

The Bulldogs had also conceded 57 tries before the Queen’s Birthday clash, leaking around 4.3 tries a game. The Eels had let 45 tries through at an average of 3.5 tries per game.

All the ingredients were there for a Parramatta side looking to crack into the NRL top four to flog the struggling Bulldogs. However, the boys from Belmore had other ideas and smashed the Eels 34-4 in one of the biggest upsets of the season.

It was just the third win of the season by the Bulldogs, although strangely all three of their victories have come against top eight sides – North Queensland, Sydney Roosters and now the Eels.

This punter was not the only one to feel the pain of riches slipping through their fingertips.

‘It was looking like a very happy Queen’s Birthday public holiday for a huge number of our punters who just needed Parramatta to win which would’ve meant all eight favourites won across the round – which is always a very popular multi,’ Sportsbet’s Sean Ormerod said.

‘Unfortunately, no one told the Bulldogs players and they spoiled the party in a big way.’ 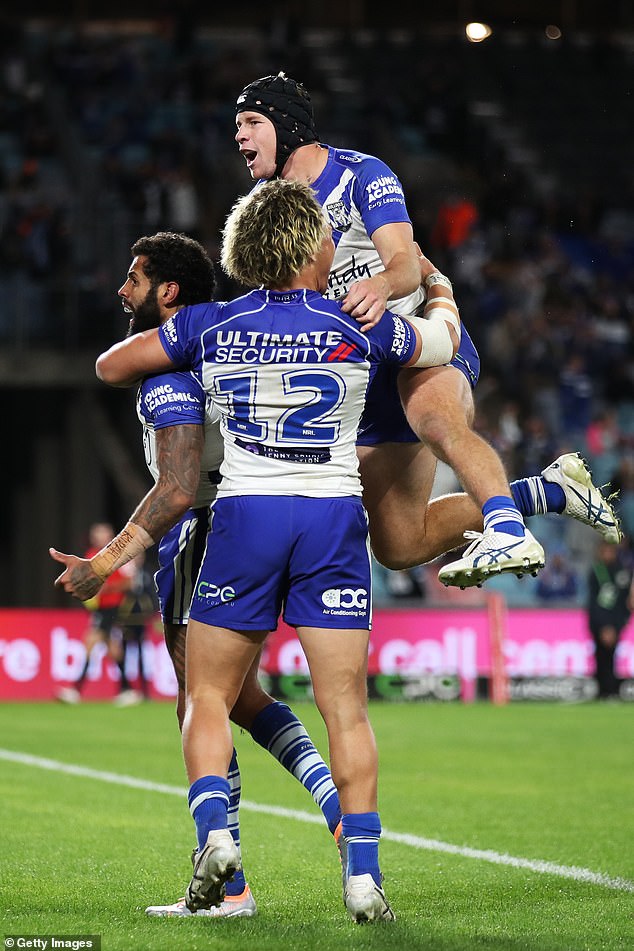 Prior to the Bulldogs v Parramatta match, all seven favourites had not only won, but covered the line in their respective NRL matches.

Sportsbet confirmed there were thousands of punters out there hoping Parramatta could complete the clean sweep of favourites winning, which is a popular eight-leg multi bet.

Parramatta went into the match paying $1.10 to win, one of the shortest prices all season, which implied they had a 90 per cent chance of beating the Bulldogs.

Very few punters gave the ‘Dogs a chance, with 90 per cent of the game day money received by Sportsbet being placed on the Eels.