Shell hikes dividend payout for shareholders by 50% and returns £1.4bn in share buyback as oil prices an profits soar

Oil giant Royal Dutch Shell has increased its dividend and started buying back millions of shares from investors after the business broke through performance expectations in the last few months.

Anglo-Dutch Shell said the buybacks will return around £1.4billion to shareholders before the end of the year.

The group upped its dividend payout to shareholders from 11p a share to 17p a share. But the dividend is still far from the 34p level it was cut from last year.

On the up: Oil giant Royal Dutch Shell has increased its dividend and started buying back millions of shares from investors

The move comes over a year after Shell took the almost unprecedented step of cutting its dividend for the first time since the Second World War amid the coronavirus pandemic.

During the early phases of the pandemic, oil prices plummeted. They have since risen sharply over 150 per cent, meaning millions of Britons are now paying hefty sums of cash to fill up their motors with fuel.

Shares in the oil company rose by almost 4 per cent in early trading on the London stock market.

Shell’s boss Ben van Beurden, said: ‘We are stepping up our shareholder distributions today, increasing dividends and starting share buybacks, while we continue to invest for the future of energy.

‘The quality of Shell’s operational and financial delivery and strengthened balance sheet have given the Board confidence to rebase the dividend per share from Q2 2021 onwards to 24 US cents.

‘We are also launching $2 billion of share buybacks, which is targeted to be completed by the end of this year.

‘Total shareholder distributions for 2021 are expected to be around the middle of the 20-30% range of CFFO from the previous four quarters. Our progressive dividend policy to grow dividends per share by 4% annually, subject to Board approval, remains unchanged.’ 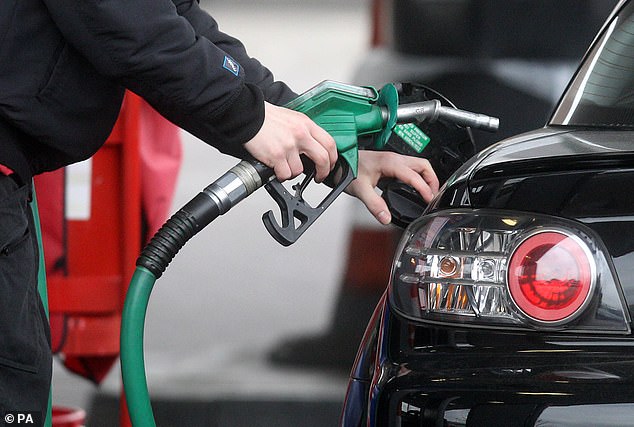 Surging prices: Oil prices have risen sharply since the early stages of the pandemic

Shell’s adjusted earnings reached a little over £4billion during the second quarter of the financial year, which is more than eight times last year’s levels.

Stuart Lamont, an investment management at Brewin Dolphin, said:  ‘Royal Dutch Shell’s balance sheet has strengthened on the back of a more sustained higher oil price – with that, the company has made progress on debt reduction and significantly improved income compared to the same period last year.

‘While the increased shareholder distributions in the form of a higher dividend and share buyback programme will be welcome boosts for investors in the short term, Shell will need to maintain focus on, and up investment in, its transition towards net zero for it to stay relevant in the long term – a tricky balancing act if it is to remain an attractive proposition to shareholders.’

Keith Bowman, an analyst at Interactive Investor, said: ‘In all, a dire outlook at the start of the pandemic forced Shell to reset its finances, with around $20 billion removed from its outgoings, including last year’s first cut of the dividend since the Second World War. Asset sales and a refocusing towards low-carbon power arenas have further set the tone of the company’s transition.

‘But a 150% plus rise in the oil price since pandemic lows in March 2020 has boosted cash flows and allowed it to reduce net debt to its former target of $65 billion.

‘As such, and as previously flagged, an increase in shareholder returns is now being made, with the increase in the more permanent dividend payment seen by management as an indicator of its outlook confidence.

‘For now, and with analysts estimating a fair value price of over £17, market consensus opinion remains highly favourable in tone, pointing towards a ‘strong buy’.’