It’s been a long uncontested fact that Hugh Jackman is the hardest working man in show business.

And it appears that even work must come before one of the most important events in his life – his birthday.

The Greatest Showman actor’s wife Deborra- lee Furness was reportedly forced to cancel his big 5-0 bash when it became apparent that Hugh was going to be staying back late shooting his new film.

Oh no! Hugh Jackman forced wife Deborra-lee Furness to postpone his 50th birthday party due to his hectic work schedule

Hugh was on set of his new New York-set film Bad Education until 3am, forcing Deborra-lee to reschedule the party until the following weekend, Rob Shuter’s ‘Straight Shuter’ podcast reports.

While Deborra-lee was left to blow out his candles on her own, the decision to postpone was likely to be amicable.

Opening up to Who magazine recently, he said that he and Deborra-lee had a ‘secret pact’ that helped keep their relationship on track.

‘When Deb and I got married, we made a pact that we would look at each other at every turning point in our lives and ask ourselves if this is good or bad for our family,’ he explained.

On Thursday, Hugh was spotted being encircled by bodyguards as they continued shooting for the film.

Cutting a handsome figure in an olive grey suit pants and comfortable overcoat, the Wolverine star appeared pensive while flanked by his churlish looking entourage.

It isn’t all work and no play for Hugh however, with the star spotted attending the New York premiere of his new film The Frontrunner with wife Deborra-lee in toe on Tuesday night. 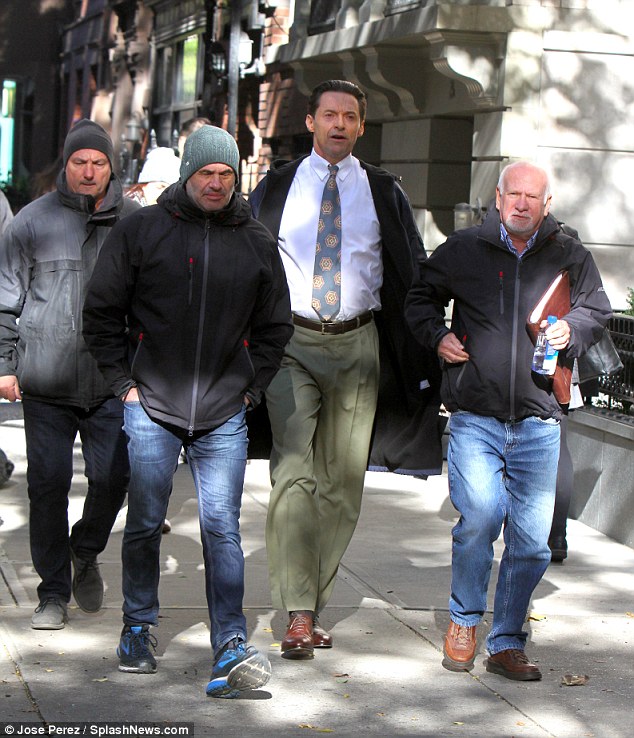 Tough guy: On Thursday, Hugh was spotted being encircled by bodyguards as they continued shooting for the film