Hugh Sheridan was driven to suicide by transgender activists

Hugh Sheridan has revealed that he was driven to suicide after being targeted by transgender activists last year, which led to him being severely trolled online.

The actor, 36, also slammed cancel culture while discussing the ordeal with the Sydney Morning Herald on Saturday.

The backlash started after the Packed to the Rafter star accepted the lead role in the musical stage play, Hedwig and the Angry Inch.

Trolled: Hugh Sheridan has revealed that he was driven to suicide after being targeted by transgender activists last year over his casting in Hedwig and the Angry Inch

The story centers around Hedwig, a genderqueer punk singer from Germany who falls in love with an American soldier.

Hedwig undergoes sex reassignment surgery to become a woman and flee to the US with their lover, but the surgery is botched and the soldier heads back home alone.

The musical, which was developed into a 2001 film, has gained a cult following over the years and has been played on Broadway and in London’s West End.

When Hugh was announced for the lead role for the Sydney version early last year, he was immediately met with backlash from members of the LGBTQI+ community, who demanded that the role go to a transgender actor.

Four transgender activists had organised an open letter demanding he be dropped from the musical, which resulted in the actor being trolled on social media with ‘horrific messages’. 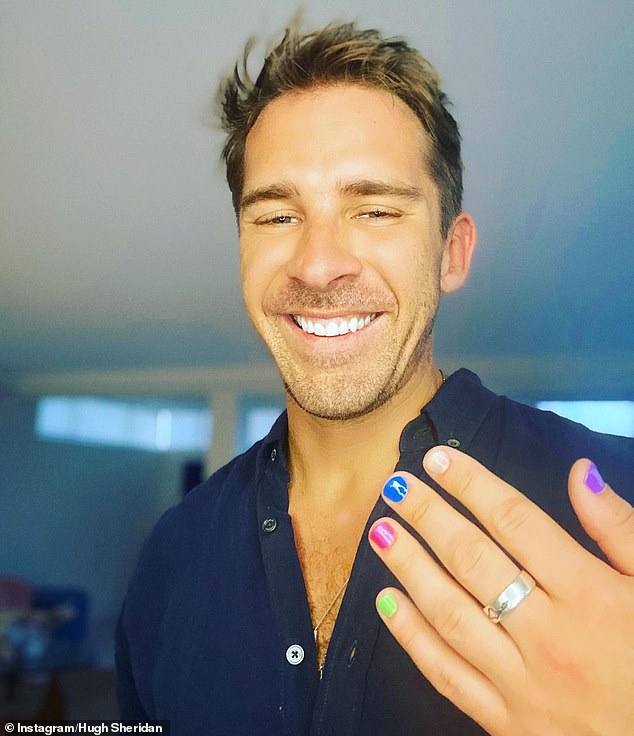 Cancelled: The actor, 36, also slammed cancel culture while discussing the ordeal after transgender activists had the musical canned last year

The letter gained so much media attention that Hedwig’s American creators, John Cameron Mitchell and Stephen Trask, issued a statement that Hedwig was not transgender and that anybody could play the role.

However, it wasn’t enough to quell the backlash, with the musical’s Australian producers eventually siding with the activists and cancelling the show altogether.

The cancellation led to the entire cast and crew, which included a trans woman and indigenous singer Casey Donovan, all losing their jobs.

Hugh was branded ‘transphobic’ by trolls on social media, and the backlash intensified when he responded to one of the transgender activists in his DMs, calling them ‘insane’. 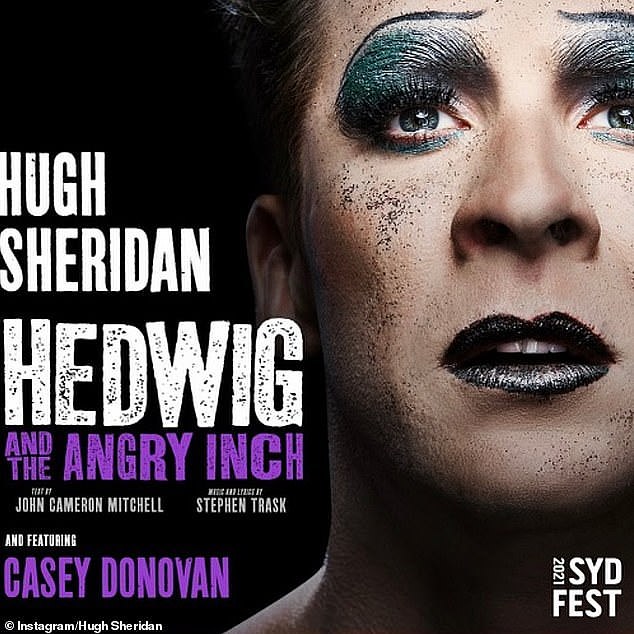 Backlash: When Hugh was announced for the lead role for the Sydney version early last year, he was immediately met with backlash from members of the LGBTQI+ community, who demanded that the role go to a transgender actor

The person then posted the private message on their own Instagram account, which caused Hugh to be trolled even further.

‘I went into a very, very dark place,’ he told the Sydney Morning Herald, before revealing that he tried to commit suicide twice over the ordeal.

‘You cannot support cancel culture if you care about people’s mental health,’ he continued.

‘Corporations who are cutting down forests – cancel them. People with outlandish right-wing views – go for it. But people who are your allies? How can you crush somebody’s creativity and self-expression because I have not come out as trans?’

One of the activists behind the letter, Zoe Terakes, declined to be interviewed for Sydney Morning Herald’s story despite being at the forefront of the movement to have Hugh removed from the musical.

Zoe, who identifies as a ‘trans masc nonbinary guy’ and goes by they/them pronouns, posted the open letter to Sheridan and Hedwig’s producers last November. 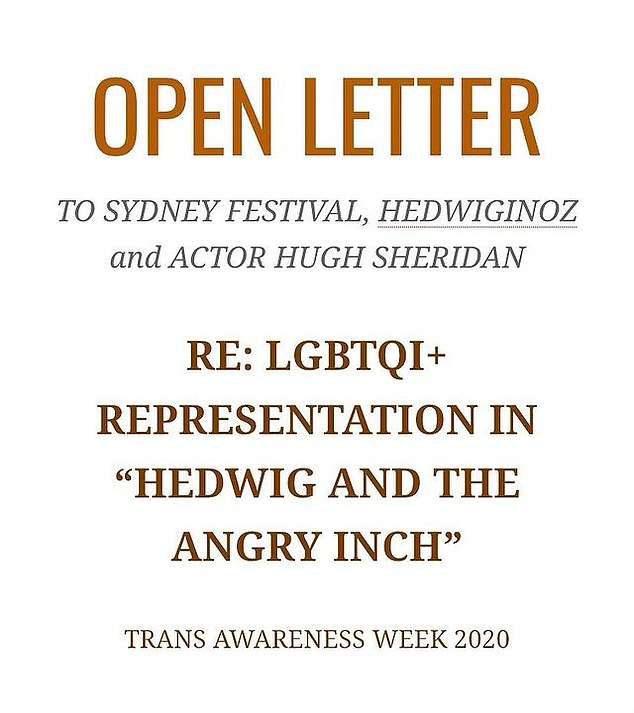 ‘Through my tears and gratitude, I can proudly say we did something,’ Zoe gushed.

‘Still awaiting any personal response/apology from @hugh_sheridan for the way he has addressed trans folk in the past 48 hours.’

Hugh sought mental health treatment at the Prince of Wales Hospital in November following the cancellation of the musical.

‘I literally woke up in hospital and didn’t remember how I got there and the doctors told me I had had an anxiety attack,’ he told Sam Armytage in March.

Earlier this year, Zoe took aim at a public women’s bath in Coogee and called them ‘transphobic’ for only allowing transgender women who had undergone gender reassignment surgery to swim there.

Zoe tagged the Randwick City Council and urged their followers to contact the council about making their policies more ‘trans inclusive’. 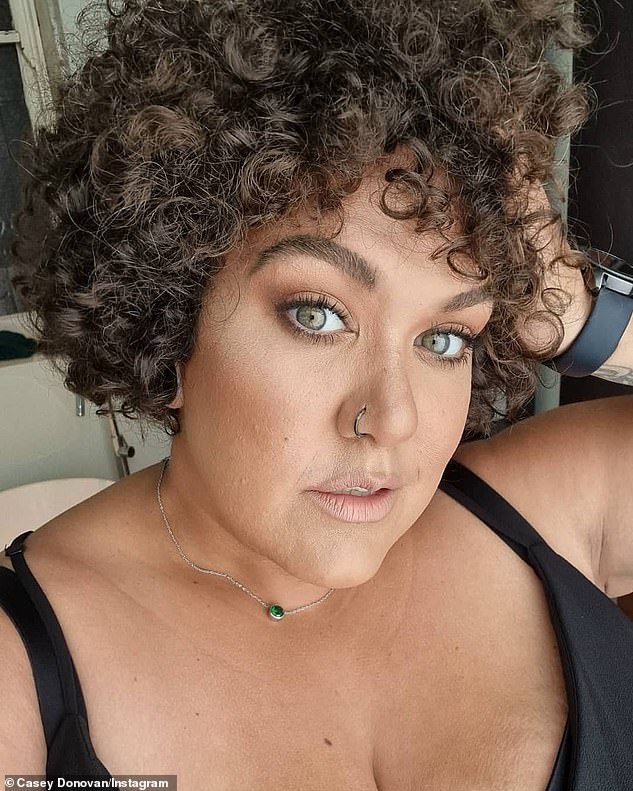 Out of work: The cancellation led to the entire cast and crew, which included a trans woman and indigenous singer Casey Donovan (pictured), all losing their jobs

According to Zoe’s demands, anybody who identifies as a transgender woman, regardless of whether or not they had undergone any gender reassignment surgery, should be allowed to swim in the women’s space.

‘Hey. Did you know that the Coogee women’s baths are straight up transphobic? Well. Now you do,’ Zoe wrote on Instagram at the time.

‘They have published on their website, ‘a safe place for all women,’ yet IN THE SAME BREATH ON THE SAME WEBSITE they have written, ‘only transgender women who have undergone gender reassignment surgery are allowed entry.’

‘Maybe they can pay every trans woman’s 30 thousand dollar surgery upon entry? This shit is violent. This shit is why trans women’s suicide + murder rates are so high, and why their life expectancy is so low. It is all connected.’

Outside of their activism, Zoe is a well known actor best known for appearing in Wentworth and Nine Perfect Strangers. 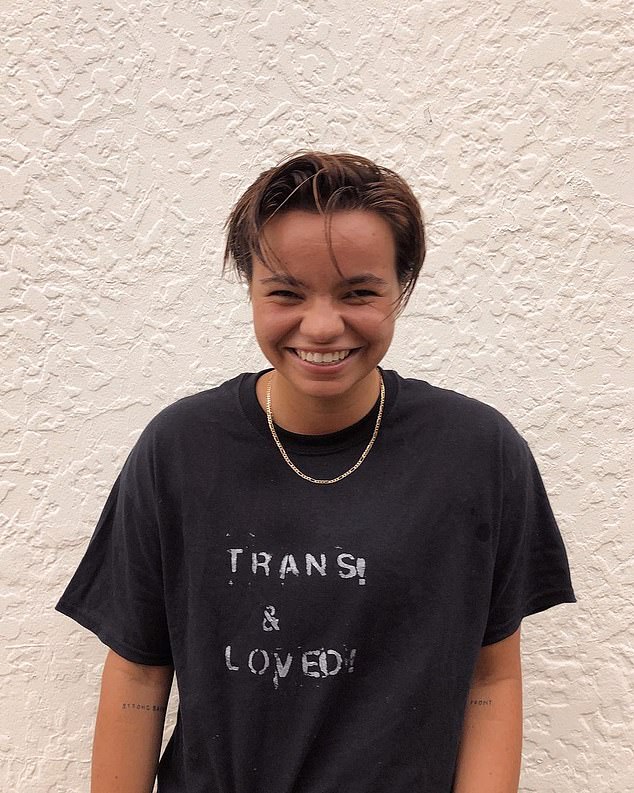