A mother faced the agonising decision of which of her two children to save first after her car burst into flames in a shopping centre car park.

Emily Smith, 26, feared for her children’s lives when her Renault Scenic caught fire outside a Tesco supermarket in Hull just 32 days after she bought it.

She claims her daughter, three, and 11-week-old son were ‘seconds from death’, but with her baby boy still asleep in the back she decided to rescue her daughter first.

Ms Smith said: ‘We had just finished our shopping at Tesco and I had strapped the kids into the car, and my passenger had strapped her child in too. When I pressed the start button, the car just burst into flames.’

‘I was in absolute shock and luckily a man walking past threw his bottle of coke over the flames in the foot well so I could get out, and everything else is a bit of a blur.’

After they had finished shopping at Tesco on March 4, Miss Smith returned to her car – which she bought for £950 – and put her children, along with her passenger’s one-year-old child, into the car.

But when the fire erupted, she and her friend started screaming and it dawned on her that she would have to choose which child to save first.

She said: ‘My three-year-old was screaming and she was aware of what was happening so I grabbed her seat belt first and threw her at this woman passing by.

‘The baby was still asleep and the seat belt had become tangled in the back of his car seat and no matter how hard I was pulling I couldn’t get him out.

‘The car seat was starting to melt because of the heat and in the end I just unbuckled him and ran with him out of the car.

‘That’s when the car started making explosion noises and the whole thing went up in flames. We were seconds from death.’ 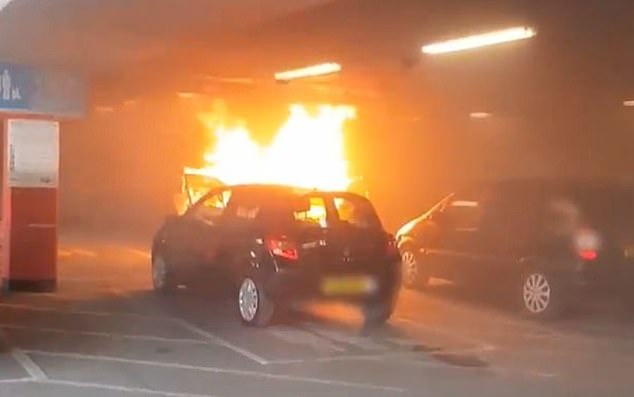 After the horrific incident, the mother-of-two tried to get a refund from Auto Touch, where she had bought the vehicle a month earlier.

But instead of giving her the money back, she claims she was given a £300 ‘goodwill voucher’ instead.

She was eventually given a payout by her insurance company, but after the £475 excess fee, she has been left out of pocket.

Tesco refunded her for the shopping she lost in the fire and one staff member even offered her £15 to make up for toys that were destroyed in the fire.

Miss Smith’s mother was riding past the shopping centre on bus when the fire broke out and called her daughter to tell her to avoid parking at Tesco.

But when she answered the phone ‘in hysterics’, her mother jumped off the bus at the next stop and ran to save her grandchildren.

Miss Smith added: ‘My three-year-old was being sick for days after and was passing tar-like stools and the baby was also covered in a red rash from the smoke.’

Miss Smith, who had to go to hospital with her children to be checked out, said: ‘After all this horror, I want people to know what danger we were put in. I couldn’t live with myself if I didn’t speak out.’ 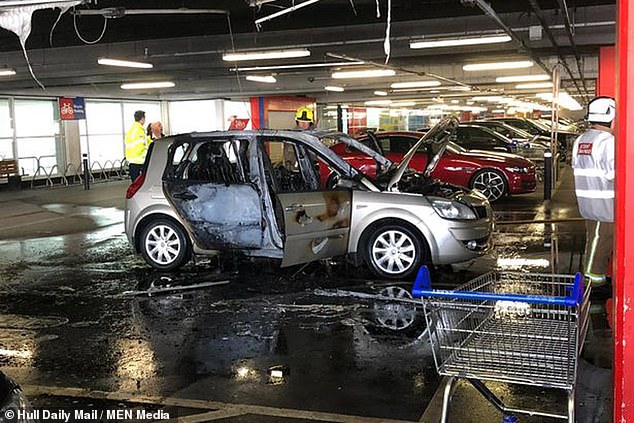 The mother-of-two sought legal advice when she was unable to get a refund for the 2007-plate car.

She said: ‘I called Citizens Advice and they told me the car is still covered under the Consumer Rights Act 2015, which means that from 30 days to six months the dealer has to offer me a repair, replacement or refund if the car is not fit for purpose.

‘I’ve also called Trading Standards and they said they will be looking into it for me.

‘I’m not saying they knew the car would blow up, or knew my family would be in danger, but none of the warning lights came on in the car and it happened so suddenly.

‘I am out of pocket and I worked so hard to save up money so I could drive my family around.’

Miss Smith was eventually awarded a pay-out by her insurance company, but after paying her £475 excess fee has been left out of pocket.

She claims she has been advised that the dealer could also be liable to pay for extras in the car, which include Miss Smith’s car seats, pram, dashcam, CDs, toys, blankets and more, which Miss Smith believes has left her with a total loss of £937 including the excess fee.

‘Everything in that car was for my children, and I don’t just have the money to buy new things,’ added.

‘Tesco were amazing with me, and refunded the shopping I had lost in the fire, and one staff member even paid £15 out of her own pocket to reimburse me for the toys I had bought from The Entertainer.

‘I can’t thank everyone enough for how they helped, and I want to thank the passers-by who took my children out of harm’s way.

‘But now I just want Auto Touch to give me what I think I am owed.  Yes, they have given me £300 but I believe I should also be refunded my £470 excess fee and what was in the car.’

A spokesman for Auto Touch said: ‘We have offered the family £300 as a goodwill gesture, and we understand how awful the experience of this fire must have been for them.

‘We have done everything we can to help them. We are a new business and we are not here to make problems, we offer great customer service and we want to make sure all our customers are happy.

‘If Miss Smith contacted us straight away we would have been able to provide more as we have insurance to cover it, but she has already been through her own insurance.

‘We would urge Miss Smith to get back in touch with us if she feels there is anything more we can help with, but we have done what we needed to do by offering her the £300.’

A spokesman for Hull City Council said: ‘The Trading Standards team has received a complaint from the consumer regarding this incident and the matter is now subject to an investigation.’