Huma Abedin appears to be trying to keep things as normal as possible for her son, and stuck to the morning school run again on Wednesday morning.

The longtime Hillary Clinton aide, 41, was pictured walking down the street in New York City after dropping five-year-old Jordan off at school.

She even managed to crack a smile, putting on a brave face just two days after her husband Anthony Weiner was handed a 21-month prison sentence for sexting an underage girl.

Keeping the routine: Huma Abedin is pictured after dropping her son off at school on Wednesday 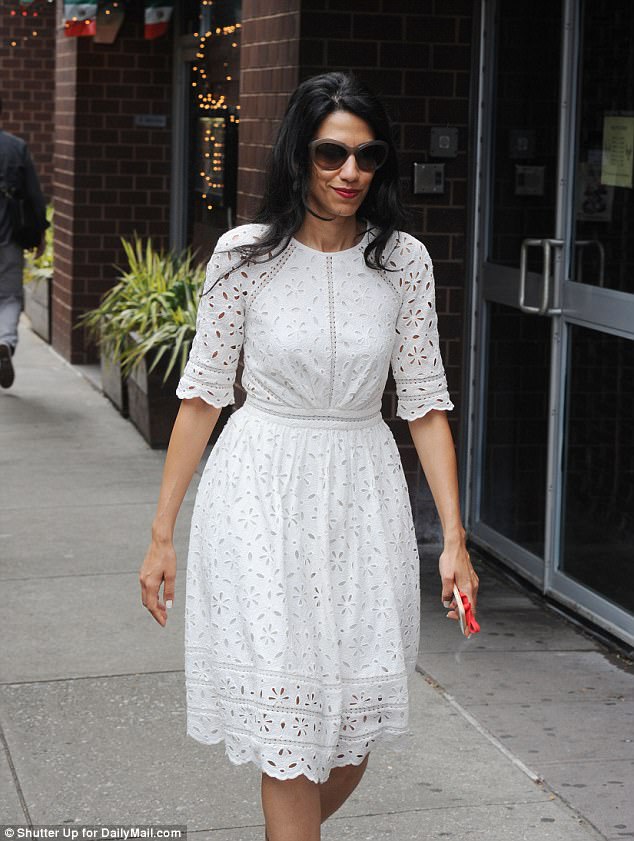 Brave face: The 41-year-old managed to crack a smile despite an incredibly stressful week 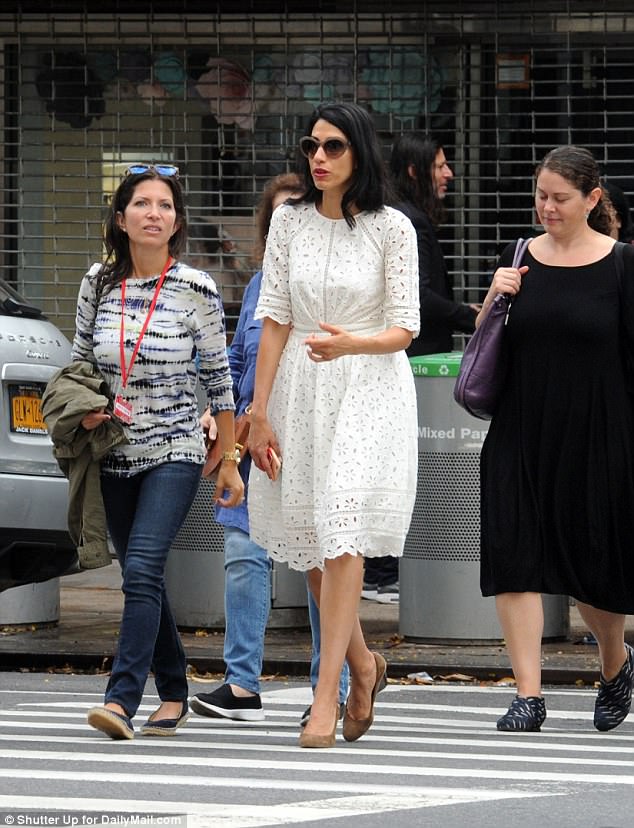 Busy: She has been seen taking her five-year-old son Jordan to school for two days in a row following her husband Anthony Weiner’s sentencing on Monday 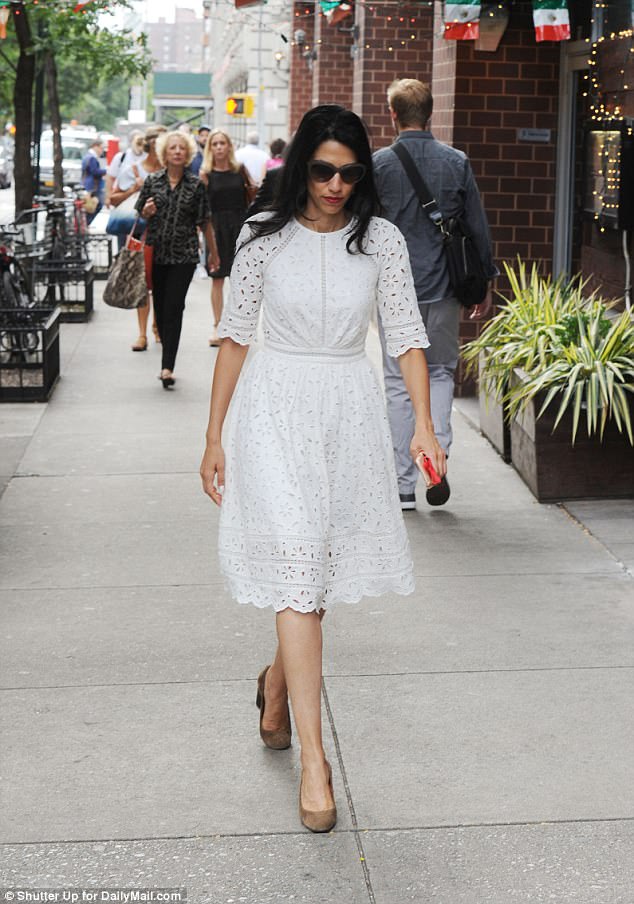 The color of innocence: She wore a summary white dress and a pair of beige heels

Always on call: She didn’t bring a bag and instead carried her phone in her hand 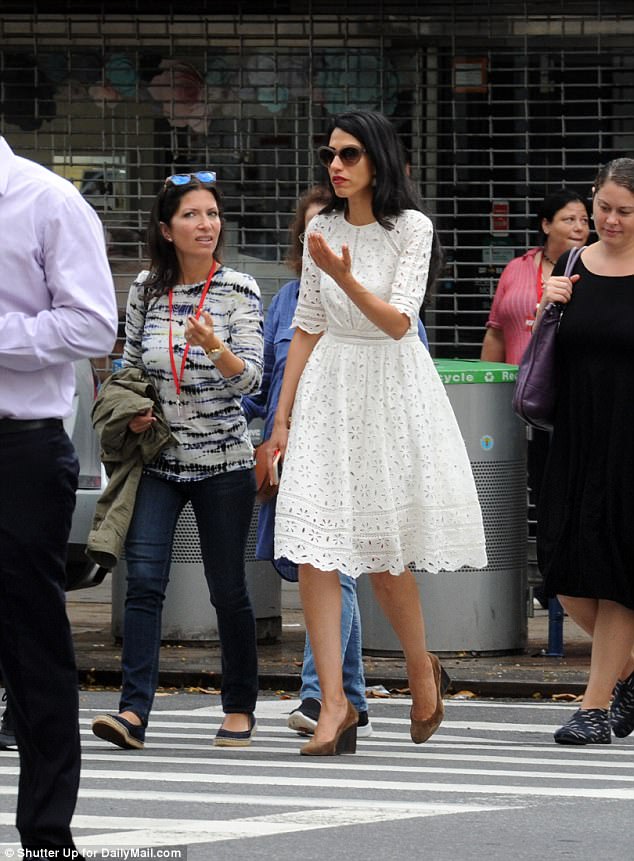 Relaxed: Huma chatted with other mothers as she crossed the street following the drop-off

Huma seemed to be reminding people of her own innocence with her outfit choice, picking a summery white eyelet frock with half-sleeves and a hem that reached past her knees.

Though she didn’t bring a purse with her, she accessorized with a pair of beige heels and dark sunglasses, carrying her phone in her hand.

She chatted with other school mothers as she crossed the street near her son’s school before departing and walking home.

Huma, who filed for divorce from Weiner in May on the same day he pleaded guilty to sexting with a minor, smiled a bit as she made her way down the street.

Despite asking the court be lenient, she was not present when her husband, 53, was sentenced on Monday. 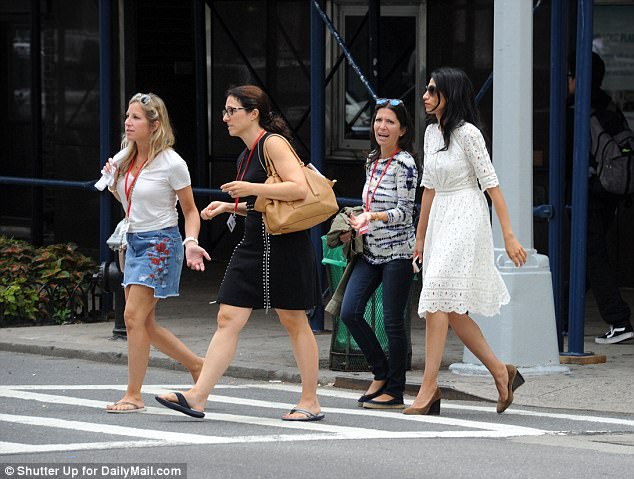 It’s all OK: She appears to be trying to keep things normal for the couple’s son 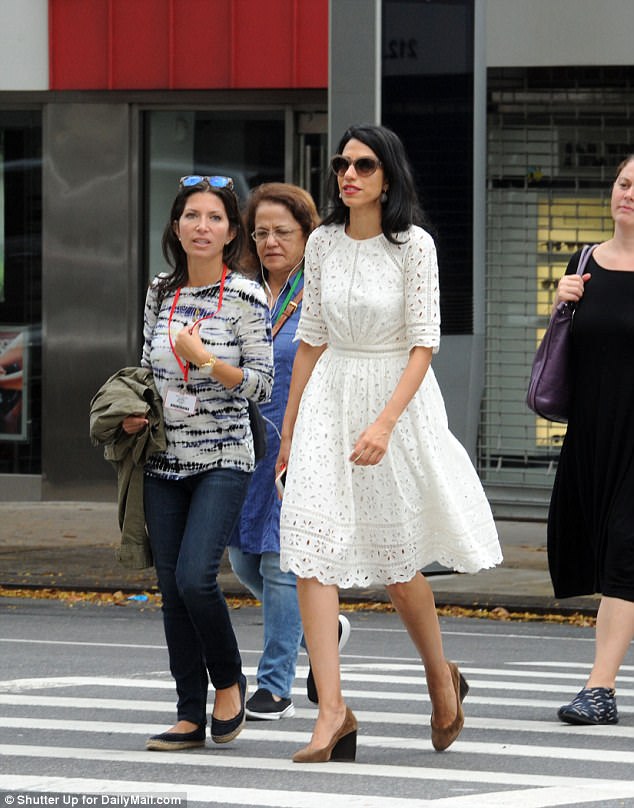 Hard time: On Monday, Weiner was sentenced to 21 months for for sending sexually explicit material to a minor 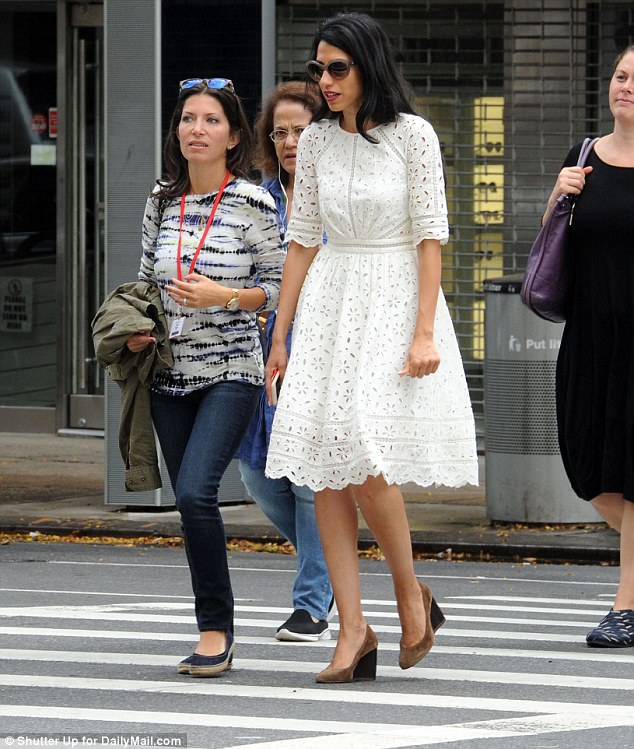 Solo trip: While Weiner sat in a car nearby during Tuesday’s school run, he did not appear to be around on Wednesday 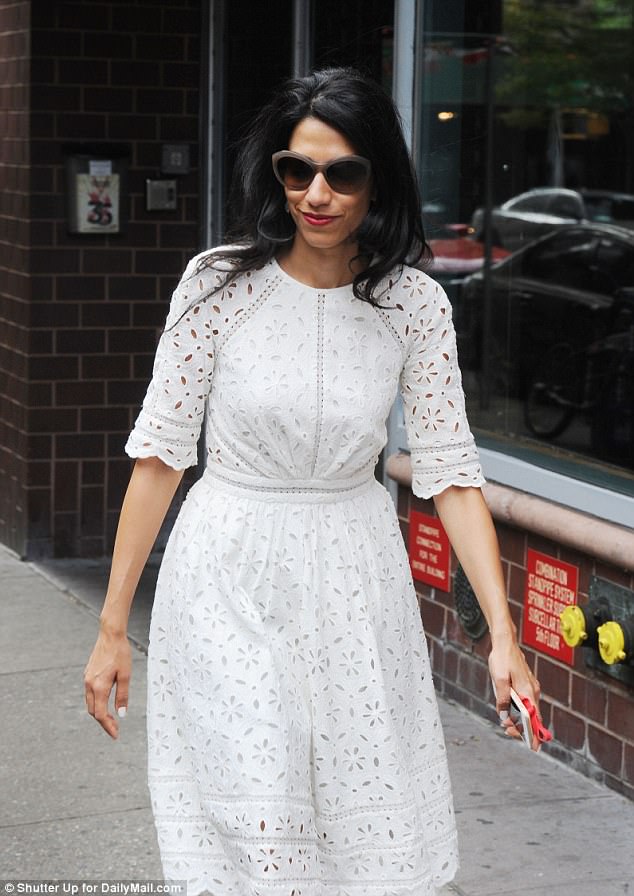 All white everything: Huma even had a pristine white manicure to match her eyelet dress 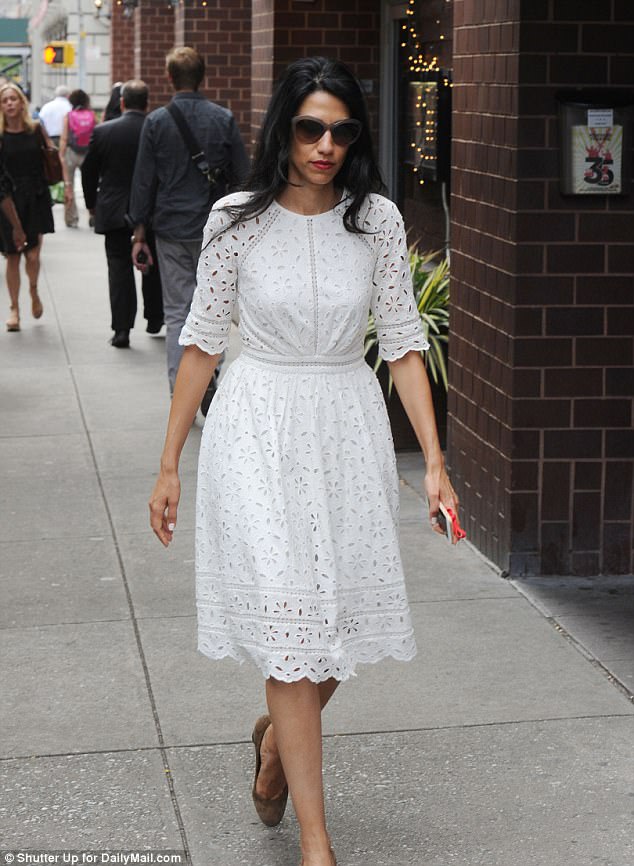 Blocking the sun and the snaps: She did cover up a bit with a pair of shades on the sunny day

Though he walked free immediately after the sentencing and was seen out in Manhattan the following day, he will have to surrender to a designated prison facility on November 6. He will also have to register as a sex offender.

Huma was not seen until the following day, Tuesday, when she took Jordan to school. She looked glum on the occasion, yet well put-together, wearing embroidered jeans with a white pussy-bow blouse and hoop earrings.

Her eye-catching jeans, which were once worn by Amal Clooney, come from Alice and Olivia’s 2016 pre-fall collection. Though no longer available, they likely cost between $800 to $900.

Weiner, meanwhile, sat in a car nearby. 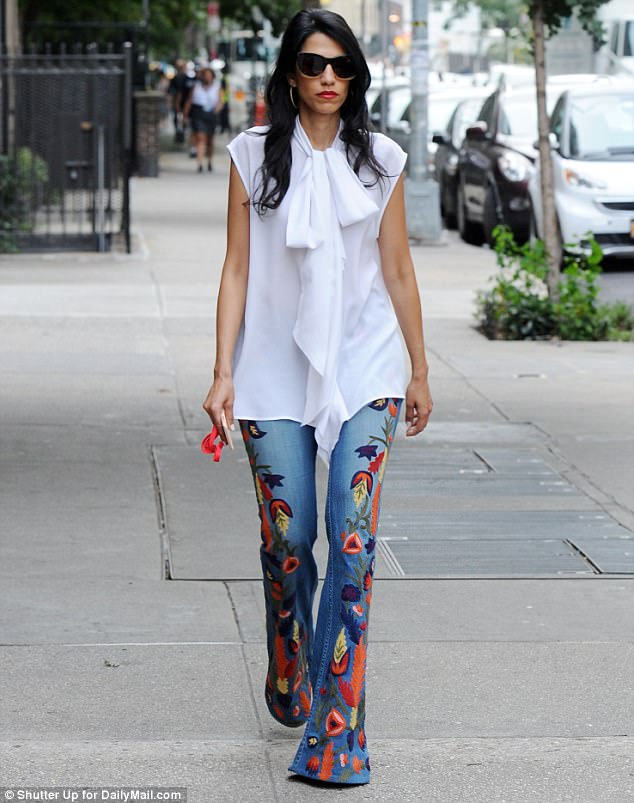 All normal: On Tuesday, she was also seen taking her son to school in the morning 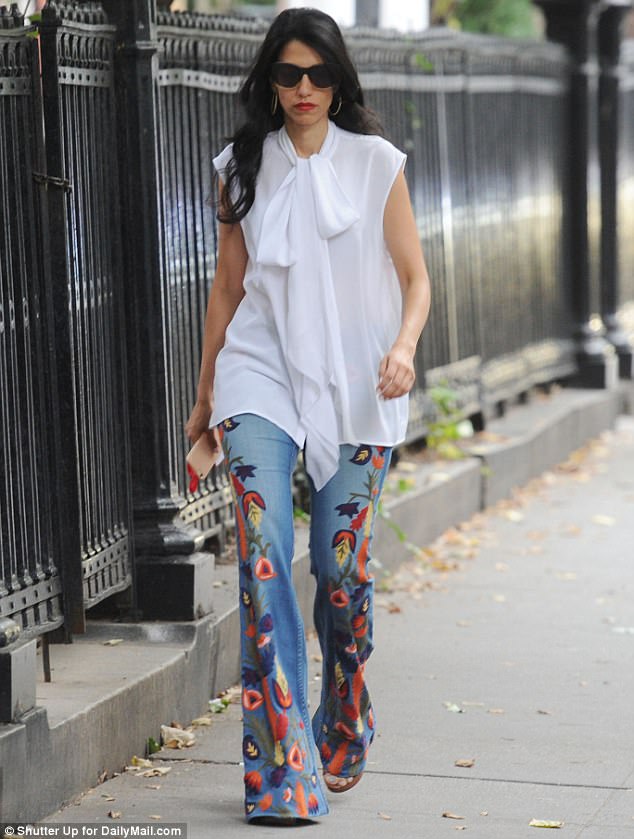 Hippie chick: The mother-of-one wore a pair of embroidered Alice and Olivia flared jeans for the trip, pairing the vibrant pants with a more elegant pussy bow blouse 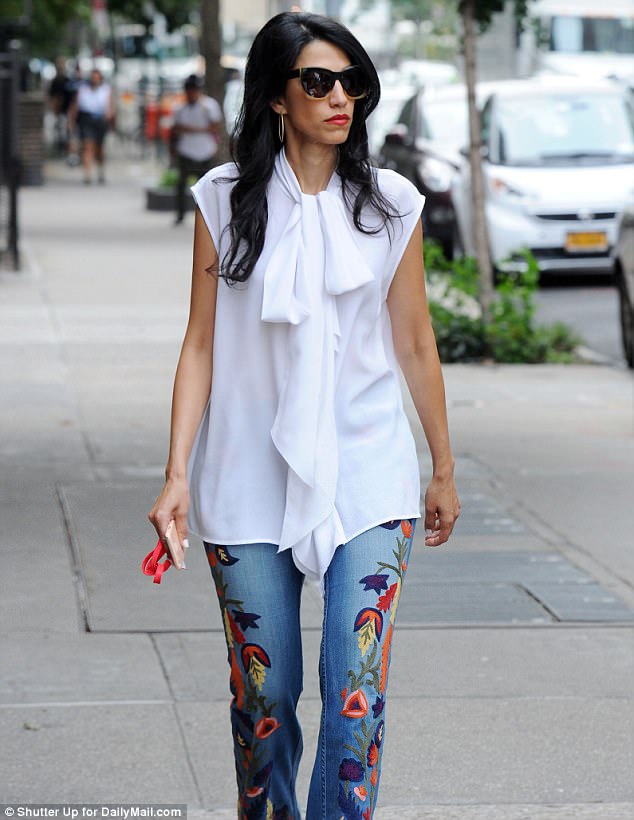 Making a statement: Her bold outfit provided a stark contrast against her solemn mood

Accessories: The political staffer paired the embroidred jeans with hoop earrings and a touch of red lipstick, letting her hair flow freely on her shoulders 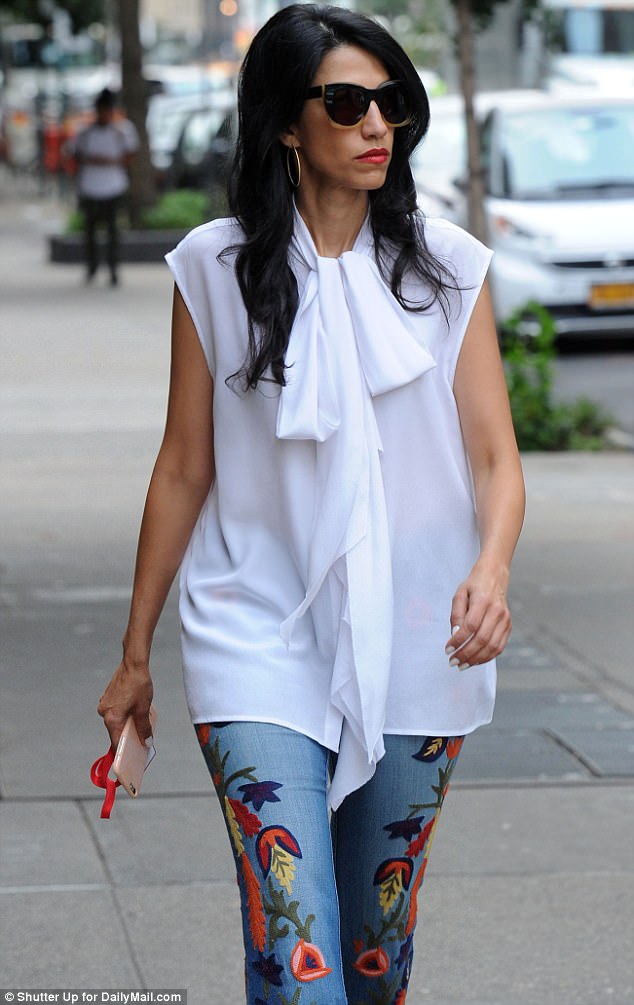 Gone: The eye-catching jeans were once worn by Amal Clooney

On his way: The former congressman crossed the street as he headed towards the subway

Later that evening, she was seen again — this time with a sweater on top of her outfit — heading home for the evening.

While Abedin didn’t appear in court for her husband’s sentencing, she did write a letter as part of the case, asking for mercy as she begged for the judge’s sentencing not to have a ‘negative impact’ on their son.

In the missive, she told authorities she was ‘devastated’ by the actions of her husband of seven years, and pointed out she was writing this letter for the benefit of their son, whom she called ‘the light of our life’.

‘As would any parent, if there has to be any negative impact on [redacted], I would like to be as small as possible,’ Abedin wrote.

Weiner has agreed to register as a sex offender, and as such the disgraced congressman will be prevented from going within a certain distance of schools.

Earlier this month, when he and Abedin took their son Jordan to his first day of school, the father turned back halfway through the walk, leaving Jordan and his mother to complete the rest of the trip together. 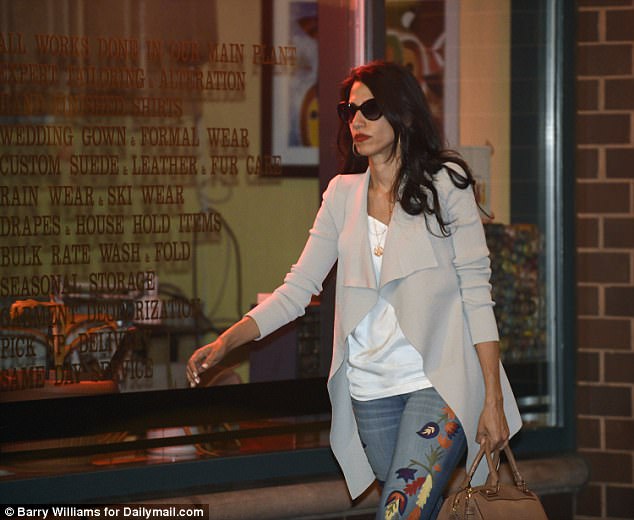 Business as usual: On Tuesday night, Huma was seen returning to her Manhattan apartment in the same outfit with a sweater on top 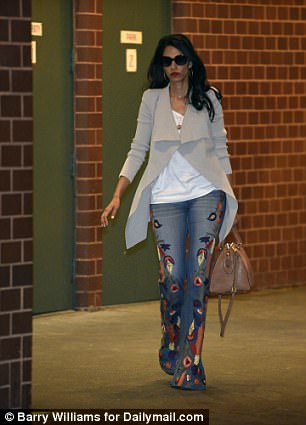 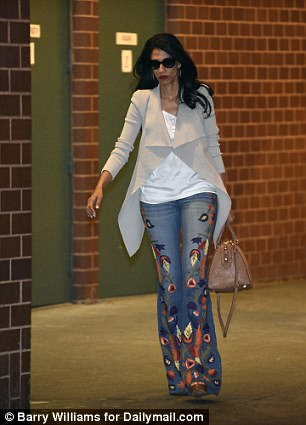 She’d had a rough 24 hours, though she did not attend Weiner’s sentencing 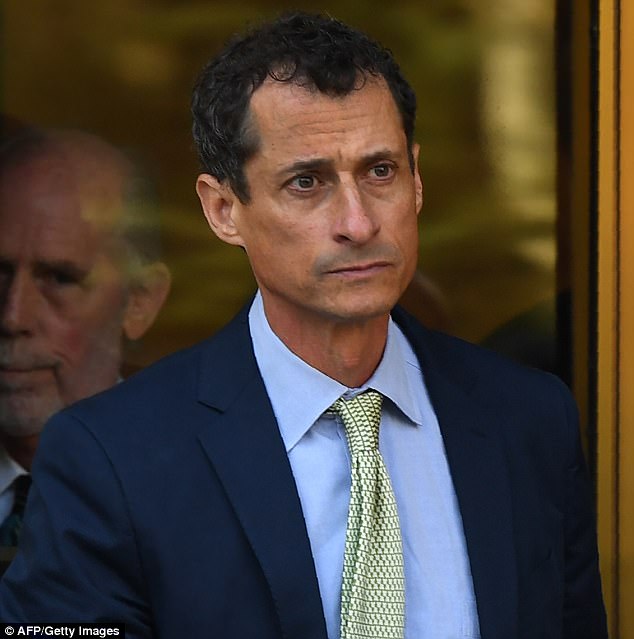 Sentence: Weiner, who is seen leaving New York federal court on Monday, agreed to register as a sex offender, and as such will be prevented from going within a certain distance of schools 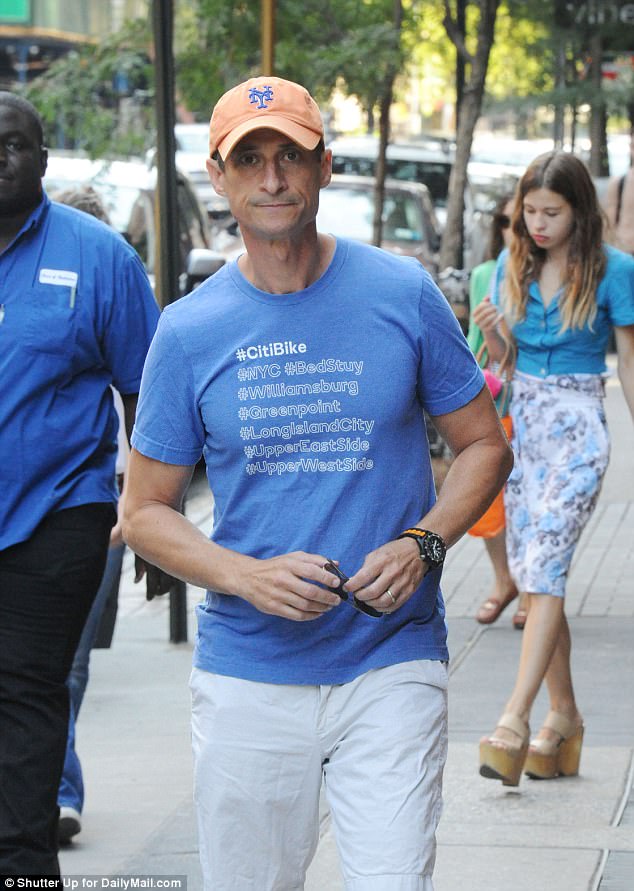 Details: Weiner still wore his wedding ring even though he and Abedin are currently in divorce proceedings and appeared in court earlier this month as part of the case 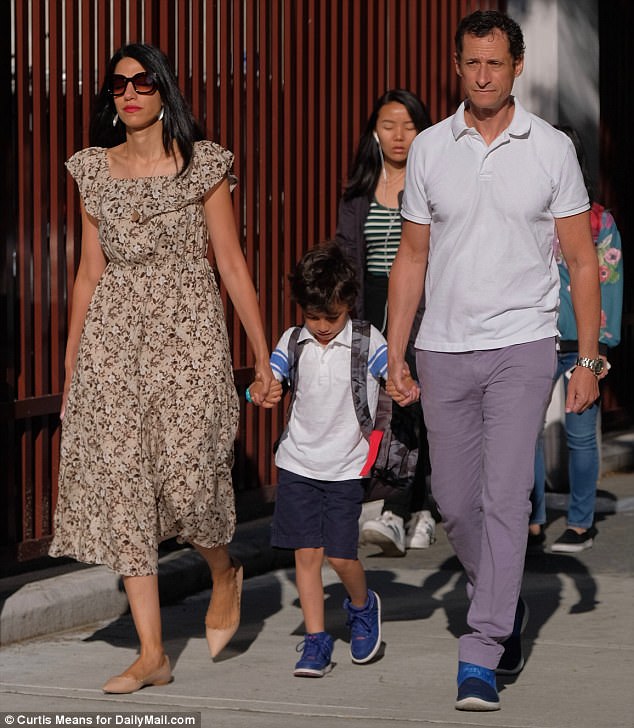 Duo: The couple took their son Jordan to his first day of school earlier this month, but the father turned back halfway through the walk

His history of sexting with the underage girl involved in the charges, whom he asked to strip naked and to touch herself on Skype, was first revealed by DailyMail.com a year ago and resulted in a federal investigation.

During his sentencing hearing, the former politician said he had betrayed his son’s ‘amazing mother’, Abedin, and referred to the boy as his ‘salvation’.

‘I focus on how I live my new, smaller, healthier life one day at a time,’ he said. ‘I was a very sick man for a very long time. I have a disease but no excuse.’

He added that he understood the prosecutors’ skepticism about whether he had changed. ‘I blamed others,’ he said. ‘I convinced myself that I wasn’t the problem.’

‘I’m an addict’, he went on, referencing how he had seen the qualities in his late brother, Seth, who passed away in 2000.

The disgraced congressman said that he was going to therapy twice a week and attending meetings every day.