Could future pandemics originate in SPACE? Human immune systems may struggle to fight off ‘alien’ bacteria and viruses from other planets, study warns

Our immune systems — along with those of other mammals — could struggle to fight off ‘alien’ bacteria and viruses from other planets, scientists have warned.

Experts believe that microorganisms could exist on other worlds — and are working to look for signs of them on Mars and the moons of Jupiter and Saturn.

This life might not be ‘as we know it’, however, as alien organisms could rely on different amino acids — the building blocks of proteins — than life uses on Earth.

Experts from Exeter and Aberdeen tested how mammal immune cells responded to amino acids that are rare on Earth but commonly found in meteorites.

They found that immune cells can react to unusual amino acids — but in a manner that is considerably ‘less efficient’ than their usual responses.

The findings suggest that extraterrestrial microorganisms could potentially pose a risk to future space missions — and Earth if brought back to our planet.

Our immune systems — along with those of other mammals — could struggle to fight off ‘alien’ bacteria and viruses from other planets, scientists have warned. Pictured: Star Trek’s Dr Leonard ‘Bones’ McCoy treats a patient in the Enterprise sickbay

‘The world is now only too aware of the immune challenge posed by the emergence of brand new pathogens,’ said paper author and microbiologist Neil Gow of the University of Exeter.

‘We wondered what would happen if we were to be exposed to a microorganism that had been retrieved from another planet or moon where life had evolved.’

‘Some very unusual organic building blocks exist outside of the planet Earth — and these could be used to make up the cells of such alien microbes.’

‘Would our immune system be able to detect proteins made from these non-terrestrial building blocks if such organisms were discovered and were brought back to Earth and then accidentally escaped?’

In their study, Professor Gow and colleagues experimented with T cells from mice — whose immune systems works in a similar fashion to those of humans — exposing them to so-called peptides containing ‘isovaline’ and ‘2-aminoisobutyric acid’.

These amino acids have often been found present in meteorites, but are comparatively rare on Earth itself — and therefore make a good stand-in for the ‘alien’ amino acids that scientists think might be part of extraterrestrial life.

The researchers found that the mice T cells were less efficient at reacting to the unusual amino acids — with activation levels of only 15 and 61 per cent, as compared to 82 and 91 per cent when exposed to two amino acids commonly found on Earth. 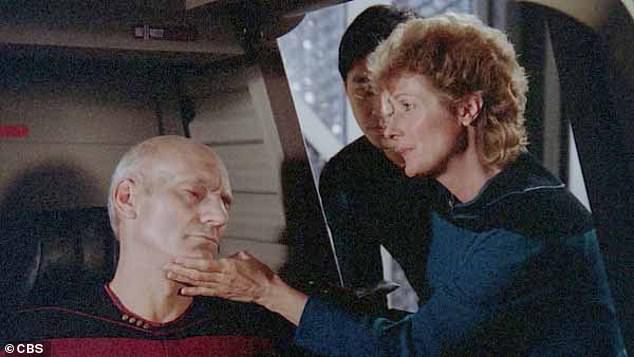 The findings suggest that extraterrestrial microorganisms could potentially pose a risk to future space missions — and Earth if brought back to our planet. Pictured: Star Trek’s Dr Pulaski treats Captain Picard after a dangerous away mission

‘We hypothesised that lifeforms that evolved in an environment of different amino acids might contain them in their structure.’

‘We chemically synthesised “exo-peptides” containing amino acids that are rare on Earth, and tested whether a mammal immune system could detect them.’

‘Our investigation showed that these “exo-peptides” were still processed and T cells were still activated — but these responses were less efficient than for “ordinary” Earth peptides.’ Dr Schaefer continued.

‘We therefore speculate that contact with extra-terrestrial microorganisms might pose an immunological risk for space missions aiming to retrieve organisms from exoplanets and moons.’

The full findings of the study were published in the journal Microorganisms.