He recently found himself in hospital, after partying too hard over the Halloween weekend.

And Rodrigo Alves, better known as the Human Ken Doll, confessed he was healthier and happier than ever on Monday, after jetting to India for a relaxing detox retreat.

Speaking exclusively to MailOnline, the 34-year-old revealed he is back to his confident best after dropping a stone in weight, during the ‘life-changing’ cultural trip.

Relaxed: Rodrigo Alves, better known as the Human Ken Doll, confessed he was healthier than ever on Monday, after jetting to India for a relaxing detox – which has seen him drop one stone

The TV personality was supposed to be staying in New Delhi for four days, to film his part in a brand new Hollywood movie.

Yet, the Brazilian admitted to MailOnline that he has extended his trip to soak up the sights and culture of the country, including the Sikh Temple in Delhi.

Posing confidently in front of the landmark in a tight-fitting shirt and shorts however, Rodrigo also displayed his newly-slim figure – having shed a stone in weight thanks to his intense ‘detox’ while abroad. 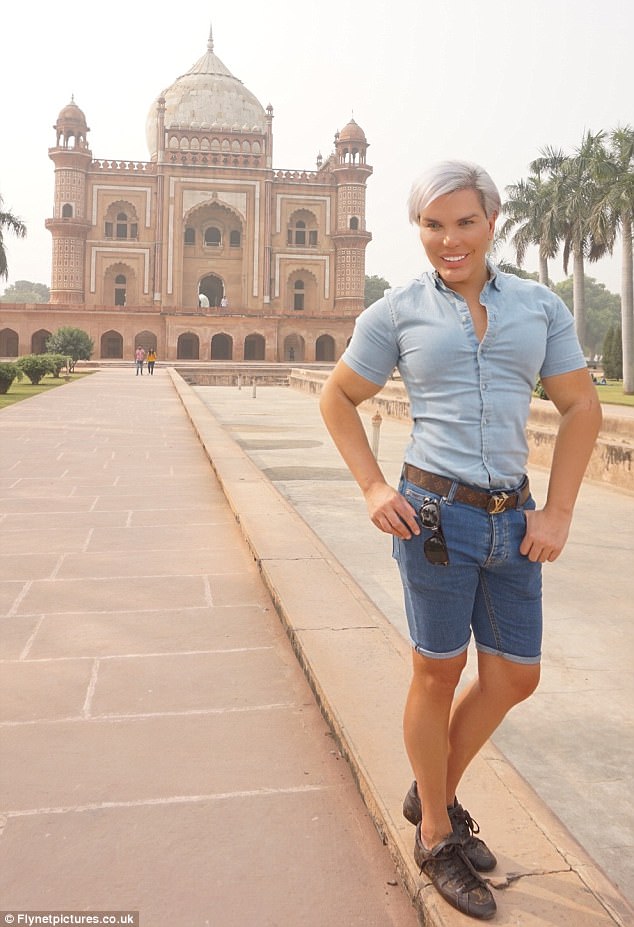 Seeing the sights: The Brazilian admitted to MailOnline that he has extended his trip to soak up the sights and culture of the country – after a busy days filming his new Bollywood flick

He explained to MailOnline: ‘I needed this break in order to align my thoughts and plans for the future, and to detox.

‘I have lost a stone just by fasting on tea, and I signed onto a retreat with a tour guide, who takes me to the main tourist sights.’

Rodrigo explained that instead of driving over to Agra to see the Taj Mahal, he decided to take the train with the locals instead – opening his eyes to the poverty in the country. 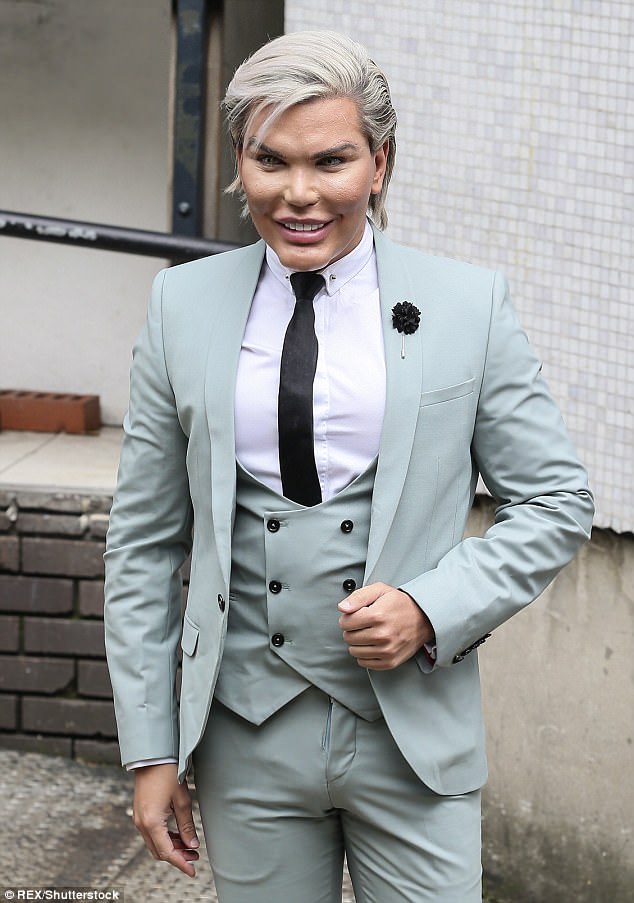 Confident: He admitted he had lost the weight gained in LA during the trip, admitting: ‘I needed this break to detox. I have lost a stone just by fasting on tea!’

After realising how fortunate he really is, the plastic surgery veteran proceeded to visit an orphanage in Delhi, and donated some of his riches to a local school in order to improve the IT system for students.

Admitting the experience had been ‘life-changing’, he said: ‘I have been seen a lot of cultural sights and have met some amazing people.

‘However I have also seen a lot of poverty, which has made me realise that I live in a bubble, and that I never knew what reality is for some people.’

Yet, Rodrigo confirmed he is still keen to relax while away and recover from his exhausting few weeks in the States, ahead of his upcoming TV appearances. 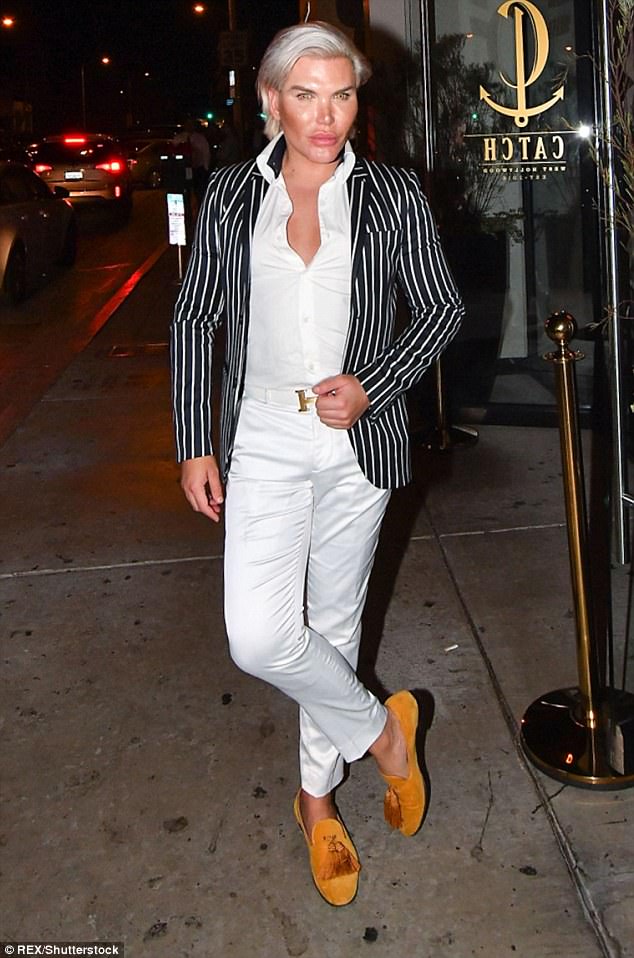 Life-changing: He also revealed the trip had opened his eyes to poverty in the country – leading him to visit an orphanage and donate money to a local school in Delhi 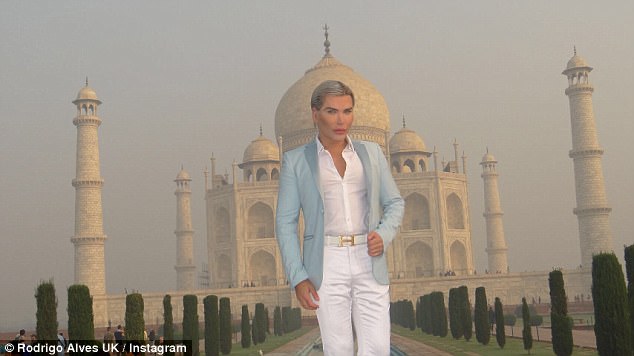 Sensational: The plastic surgery addict has become every inch the tourist in India and also documented his voyage to the iconic Taj Mahal

He added: ‘Right now I am on my way to Japuir to carry on with my detox at a stunning spa, before I return to London.

‘Then I am back on Domenica Live in Italy to show off my newly slim figure and to talk about my experiences here in India.’

Rodrigo was no doubt grateful for his relaxing trip – after revealing he had piled on the pounds during a wild week celebrating Halloween in Los Angeles.

Falling ill on the plane home after all the indulgence, he told MailOnline last month: ‘Too much drinking and a lack of sleep followed by an 11 hour flight, and my body just gave in.’ 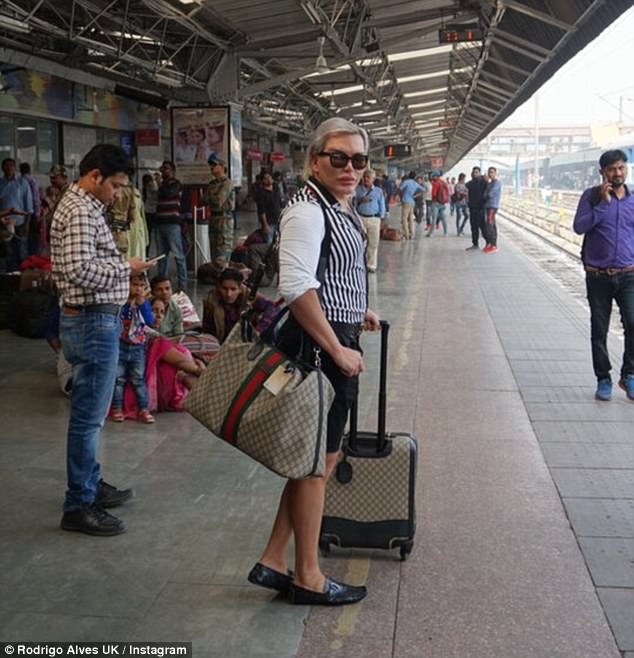 Loving life: Rodrigo has been making like the locals and using the train system to make his way from city to city 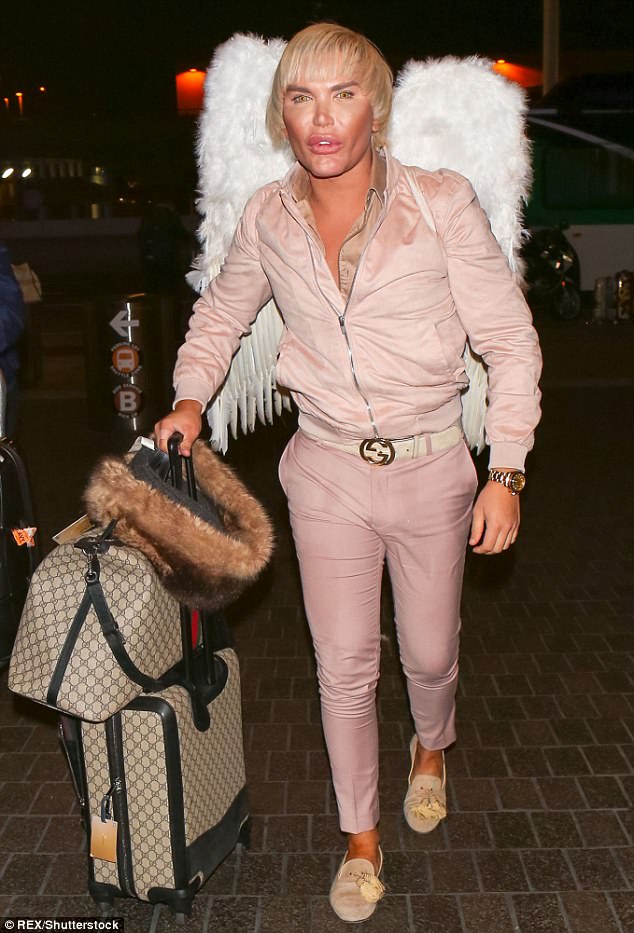 Detox needed: Rodrigo was no doubt grateful for his relaxing trip – after revealing he had piled on the pounds, during a wild week celebrating Halloween in Los Angeles (pictured at LAX)

However, he admitted he planned to go under the knife in 2018 to have six ribs removed, in order to achieve his ideal figure.

He said: ‘I have the surgery booked to give me a smaller waist in order, so my blazers will fit me properly.’

Explaining the procedure will move him one step closer to his body goal, he added: ‘God made us perfectly with spare parts in case we need them, and the floating ribs only make me look square.

‘I would like to achieve a classic figure while wearing my suits, and the only way to achieve that is to remove my ribs.’

Rodrigo has shot to fame in recent years after spending a whopping £400,000 on over sixty cosmetic procedures, earning himself the nickname ‘The Human Ken Doll’. 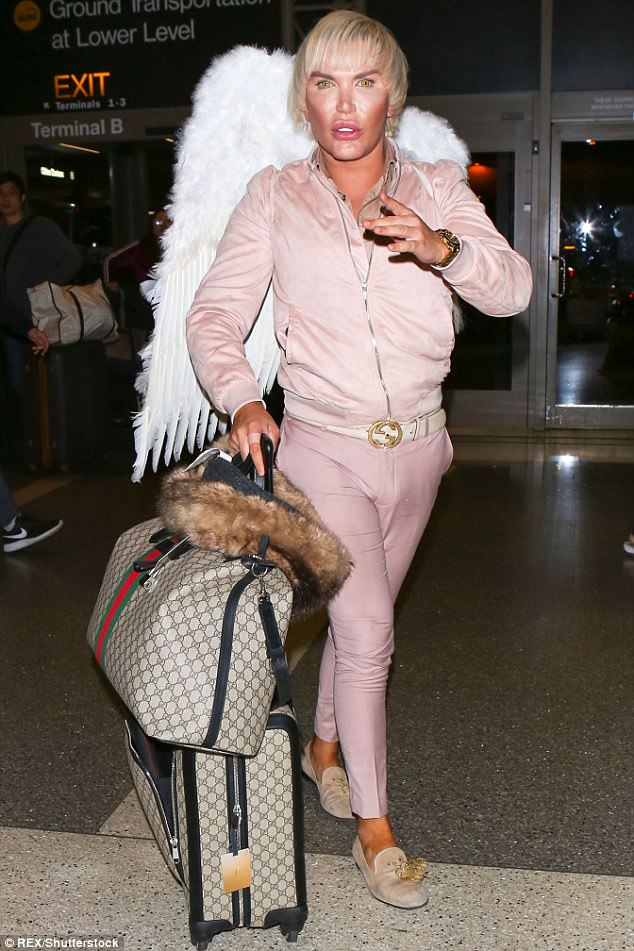 ‘The floating ribs made me look square’: However, he admitted his plans to go under the knife in 2018 to have six ribs removed, to achieve his ideal figure and ‘give him a smaller waist’