Human remains have been found inside a burnt-out fuel tanker that exploded following a collision with a car in north west Queensland on Thursday.

Emergency services were called to the scene on Barkly Highway about 8.30am on Thursday, where a fuel tanker had become ablaze following the crash.

Huge plumes of dark smoke were seen coming from the fuel tanker, and the vehicle involved was found on its side.

Police were unable to approach the tanker for hours as the fuel continued to burn, but have since discovered human remains inside.

The body will need to be forensically examined in order for formal identification of the occupant to occur.

A 48-year-old Mount Isa man, who was behind the wheel of the car, was rushed to Cloncurry Hospital in a critical condition.

The Barkly Highway was closed in both directions until Thursday night, but has now re-opened with traffic control in place.

Motorists are urged to proceed with caution.

The Forensic Crash Unit is investigating. 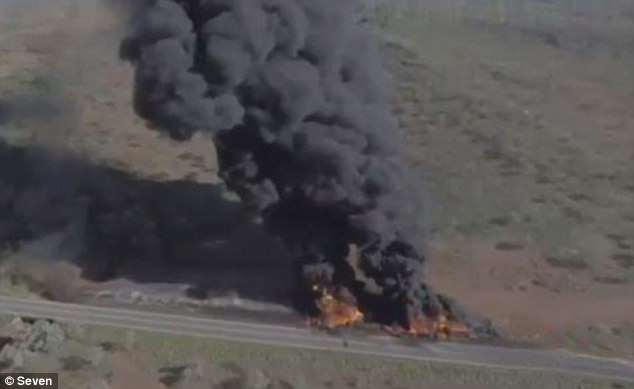 A vehicle collided with a fuel tanker on Thursday morning, causing the tanker to explode and the vehicle to roll over. The driver of the car is fighting for life in hospital