Humans are poor at predicting when dogs are about to get aggressive, study finds

Many of us know our furry friends so well that we could tell whether they wanted a walk or a wee just by the angle of their head tilt.

However, a study has suggested that this may not be the case when it comes to knowing the warning signs of canine aggression.

Researchers at the Max Planck Institute for Geoanthropology in Germany found that people could only correctly predict an aggressive interaction between two dogs just over 20 per cent of the time.

They also found that we struggle to identify these in human children too, but we are much better at identifying the telltale signs of a playful or neutral interaction. 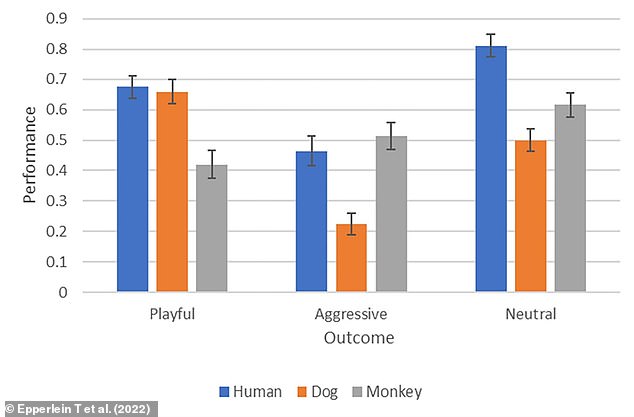 WARNING SIGNS A DOG IS ABOUT TO BECOME AGGRESSIVE

First author Theresa Epperlein said: ‘It is possible that we are biased to assume good intentions from other humans and from “man’s best friend”.

‘Perhaps this bias prevents us from recognising aggressive situations in these species.’

As a social species, humans are constantly reading each other’s verbal and body language to try and gauge the nature of an interaction.

We have evolved to do this, as being able to assess when a situation is becoming hostile, and reacting appropriately, has advantages in survival.

For the study, published today in PLoS ONE, the researchers wanted to find out how well we can categorise and predict the outcome of social interactions in different species.

They hypothesised that humans would have evolved to be best at assessing aggressive situations, as these would be the most life-threatening if gauged incorrectly.

The team showed 92 participants 27 video clips of the build-up to an interaction between either two human children, two domestic dogs, or two Barbary macaques.

The children and animals did not communicate verbally in the clips, but participants could gauge clues from their facial expressions and body posture as to what was about to happen next.

Half of the participants were asked to categorise what they had seen in the clip as aggressive, neutral or playful.

The other half were asked to predict what was going to happen, for example an attack or play session. 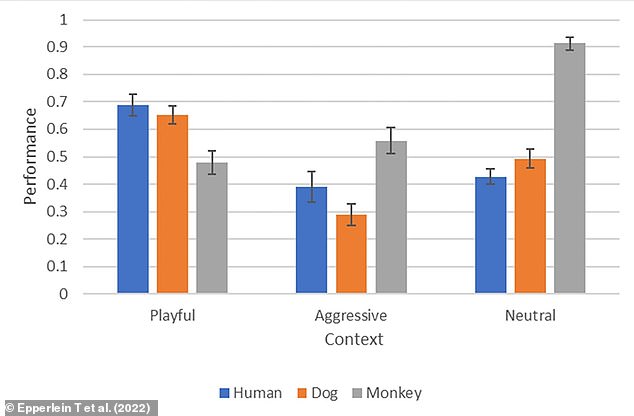 Resulting aggressive interactions, that were not shown to the participants in the clip, involved an aggressive signal from one of the clip’s subjects.

These included stiff body posture in dogs, open mouth in monkeys and a sudden movement toward the partner in children.

Resulting playful interactions involved a playful bow in dogs, playful face in monkeys and a smile in children.

It was found that the study participants could categorise the context of interactions for each species better than what would be expected by chance.

However, interestingly, they were no better at assessing aggressive and playful interactions between the human children than those of the other animals. 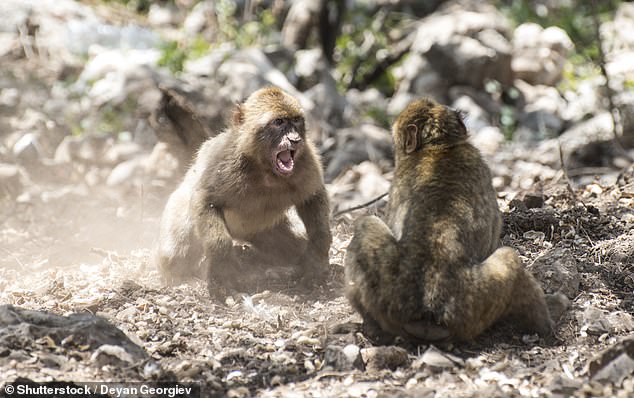 It was found that the study participants were could categorise the context of interactions of each species better than what would be expected by chance. Pictured: Fighting Barbary macaques (stock image)

The participants were also better than chance at predicting outcomes for nearly all species and contexts.

They chose correctly between 50 and 80 per cent of the time, and were best with playful interactions.

However, they performed particularly poorly in spotting when an aggressive interaction was about to occur in both dogs and children, going against the researchers’ hypothesis.

The findings show that further research is needed to understand what physical and verbal cues humans use to assess whether a situation will turn aggressive.

The results also suggest that dog owners require better education as to the warning signs of canine aggression, to reduce the frequency of dog bites

Previous research from the group did find that experience with children, dogs and non-human primates does not affect one’s ability to correctly predict a social interaction between them.

Senior author Juliane Bräuer added: ‘Our results underscore the fact that social interactions can often be ambiguous, and suggest that accurately predicting outcomes may be more advantageous than categorising emotional contexts.’

Dogs that lie on their backs while playing are being AGGRESSIVE, not submissive, scientists say

You may think that a dog looks cute when it rolls onto its back while playing.

But instead of being submissive, canines may be exhibiting signs of aggression, experts claim.

Scientists at the University of Lethbridge in Alberta and the University of South Africa, Pretoria, were interested in why dogs roll onto their back while playing with other dogs, and whether it is a sign of submission, as many owners assume.

By studying dogs playing in pairs, they uncovered that dogs lie on their backs during a boisterous play session, not to be passive, but as either a defensive manoeuvre, or a useful position from which to launch an attack.