This is the amazing moment a humpback whale is cut free by divers from an enormous fishing net that has become tangled around its body.

Captain Faizel and Dive leader Jeannot filmed the rescue mission with a head-mounted GoPro as they helped the whale in Trinidad.

The divers had spotted a calf jumping frantically in the distance and swam over to investigate. 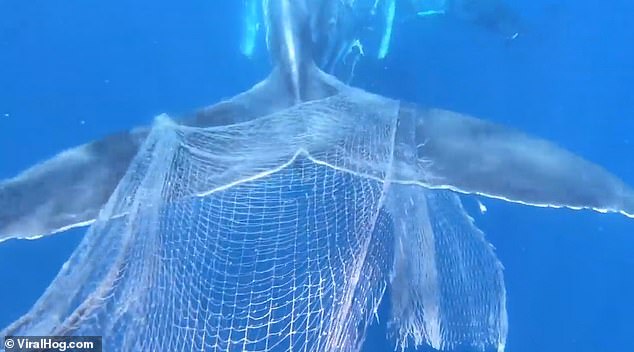 After realising a fishing net has become entangled around a mother humpback whale’s body, the divers set to working trying to free it.

The huge net is restricting movement and rubs against the whale’s skin causing terrible bruising.

The divers grab hold of the net as the humpback whale swims and use it to pull themselves along to try and cut it free.

Using a sharp knife, the divers saw at the thick rope in several places until parts of it become loose and dislodge. 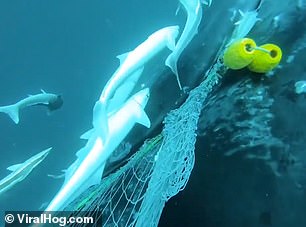 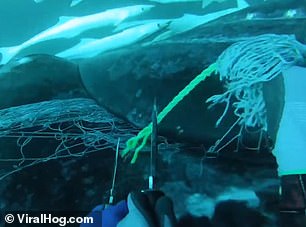 Using a sharp knife, the divers saw at the rope in several places until the net becomes dislodged

Eventually, after numerous attempts by the divers, the final piece of net is cut free from the whale’s tail and it swims away with it’s calf.

One of the divers said: ‘We decided to veer off and check it out closer. When we got in the water, all we could focus on was this gigantic fishing net covering the mother.

‘The net was restricting the whale’s movements and badly bruising the skin probably for days.

‘When we finished, we pulled the net in the boat and it weighed about half a ton, it was brought back to land and discarded. The whole process took one and a half hours approximately’ 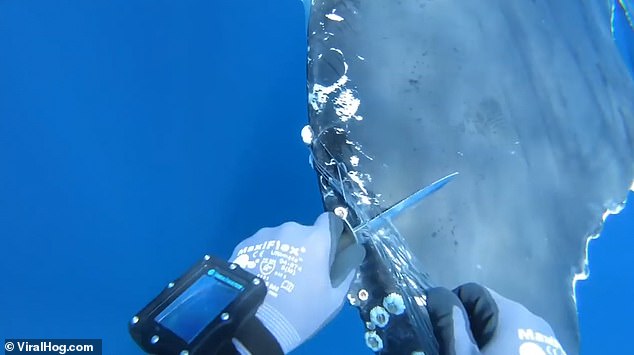 Eventually, after numerous attempts by the divers, the final piece of net attached to its tail is cut free