Protests are taking place across the globe against school shootings and US gun control.

Rallies attended by children, students and families who have been affected by gun violence along with celebrities and members of the public are taking place as part of the March For Our Lives campaign.

Thousands of people are expected at a protest in Washington DC, including students from Marjory Stoneman Douglas High School where 17 people were killed in February.

‘How many kids did you kill today?’: Supporters of stricter gun control hold placards during a solidarity rally with ‘March For Our Lives’ outside the U.S. Embassy in London 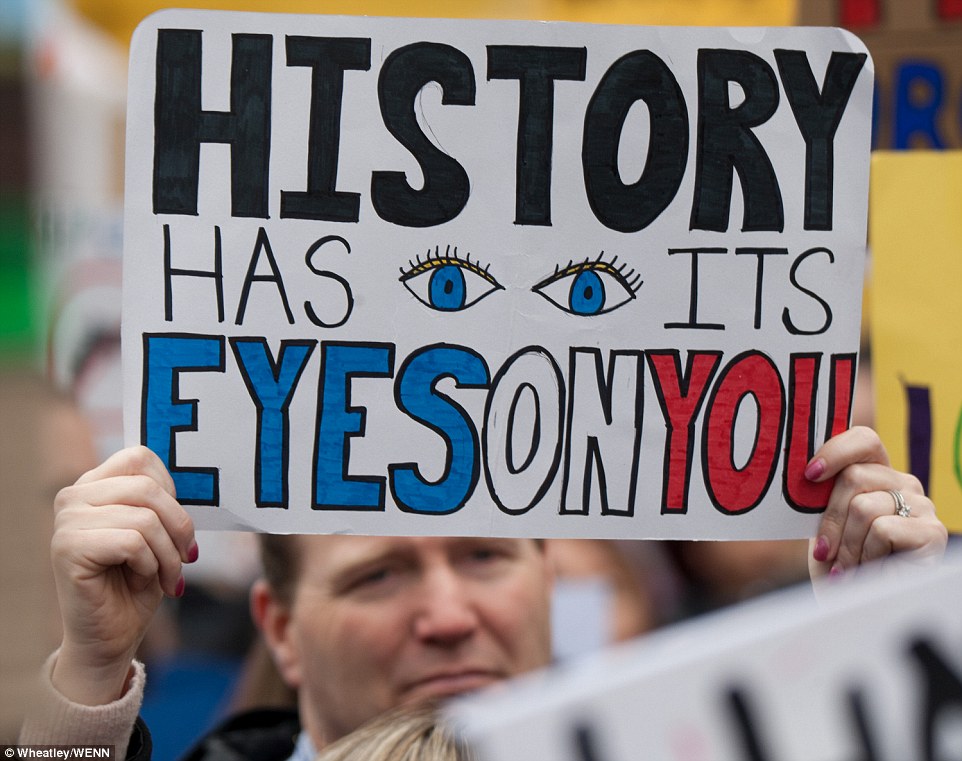 March for Our Lives event outside US Embassy, London. Led by young people in over 800 locations around the world, including Sydney, Tokyo, Mumbai, plus hundreds of places in the US. A campaigner holds a sign saying ‘History Has Its Eyes on You’ a reference to a line from hit Broadway and West End musical Hamilton. Its creator, Lin Manuel-Miranda will perform at the DC march 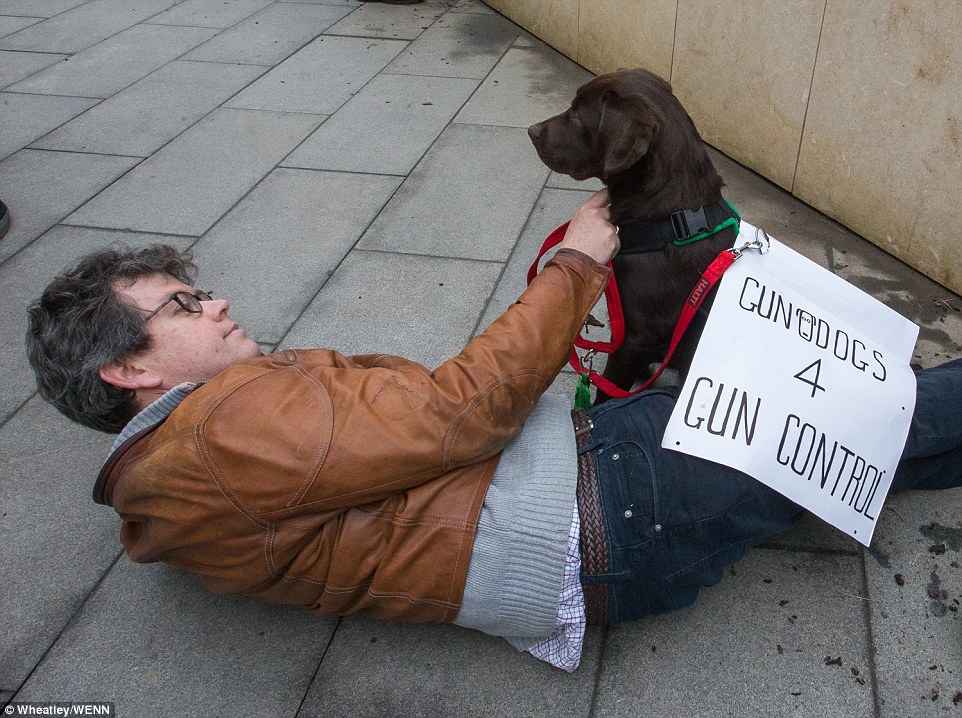 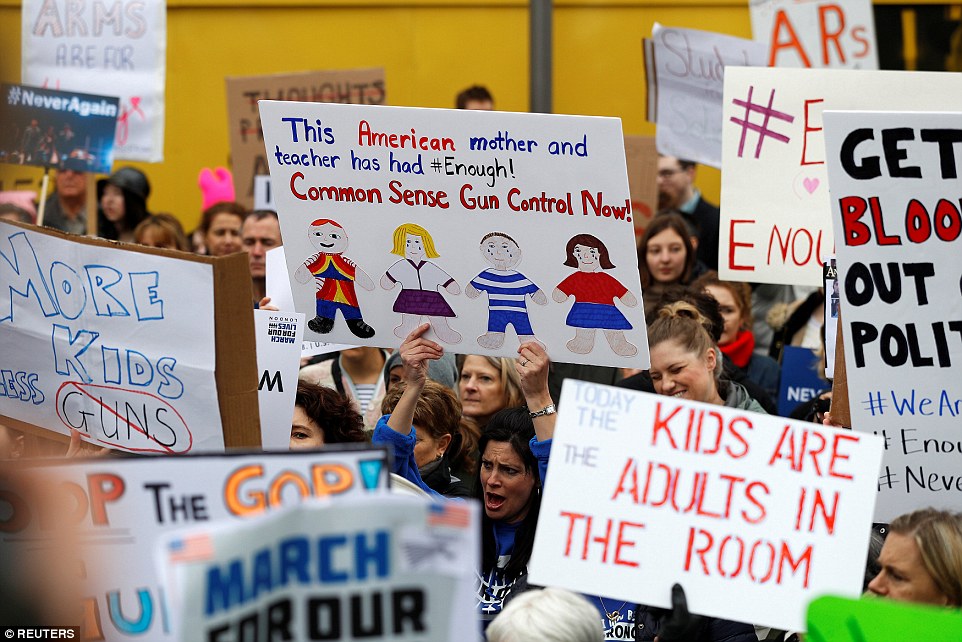 People take part in a demonstration in favour of tighter gun control in the United States, outside the U.S. Embassy in London – many of the signs praising the youth and teenagers who are leading the resistance

A protest has been organised to happen outside the new US Embassy in London. The US flag flew at half mast at the previous embassy site after the Sandy Hook Elementary School shooting, in Connecticut, in 2012.

Amnesty International UK’s director Kate Allen pointed to Britain’s own experience of school killings with the Dunblane Primary School tragedy in 1996 in which 16 pupils and a teacher were murdered.

She said: ‘After our own school shooting at Dunblane, new gun ownership laws were introduced in Britain and that’s exactly what’s needed in the United States where gun deaths are a national tragedy.

Campaigners are demanding that their lives and safety become a priority and are calling for an end to mass school shootings. 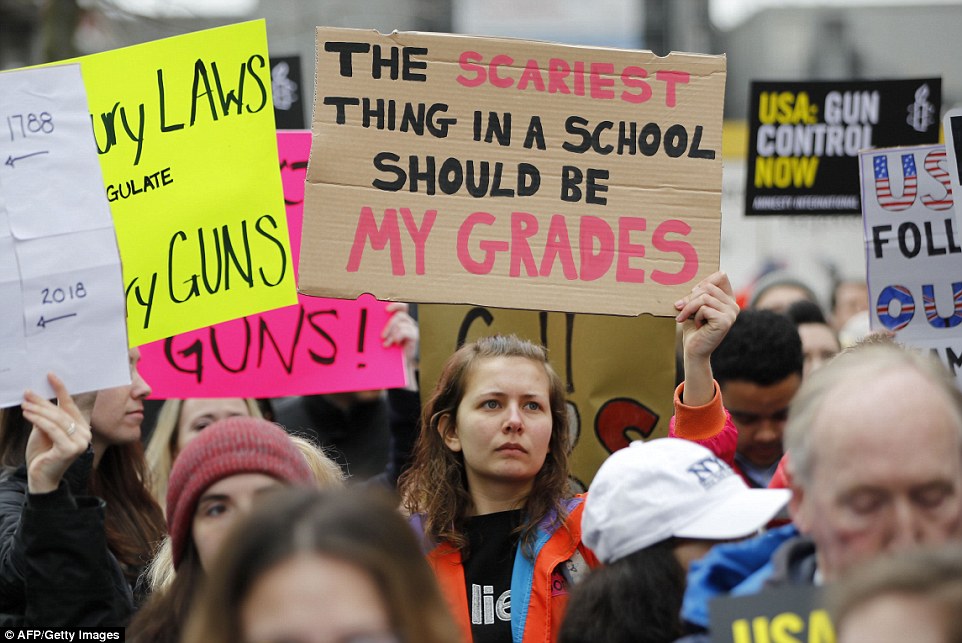 Protesters carry placards and shout slogans during a demonstration calling for greater gun control, outside the US Embassy in south London with signs including ‘the scariest thing in a school should be my grades’ 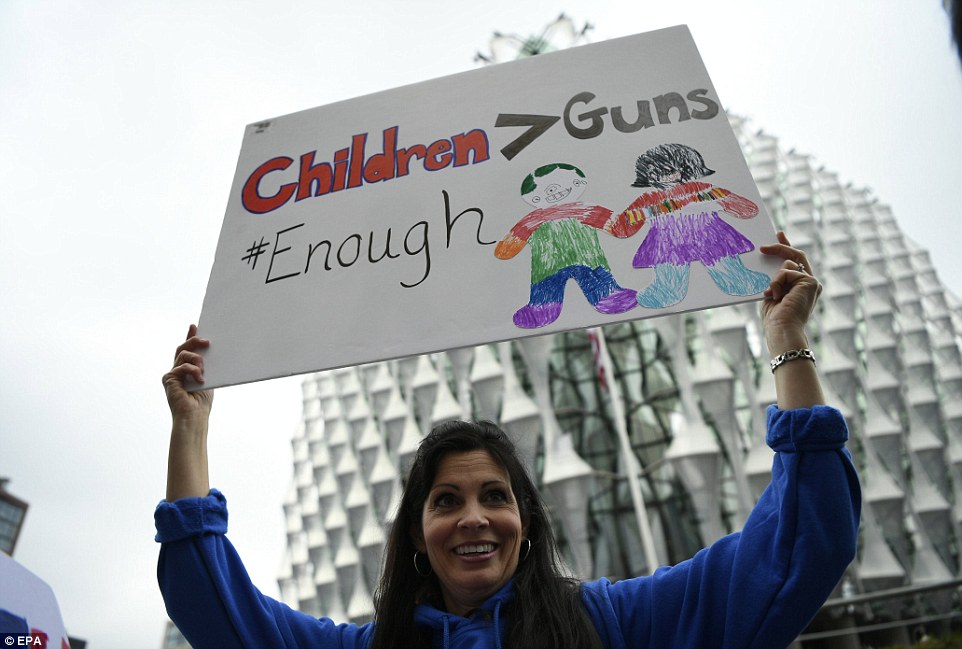 A supporter of stricter gun control during a solidarity rally with ‘March For Our Lives’ outside the U.S. Embassy in London, holds up a sign to say children are more important than guns 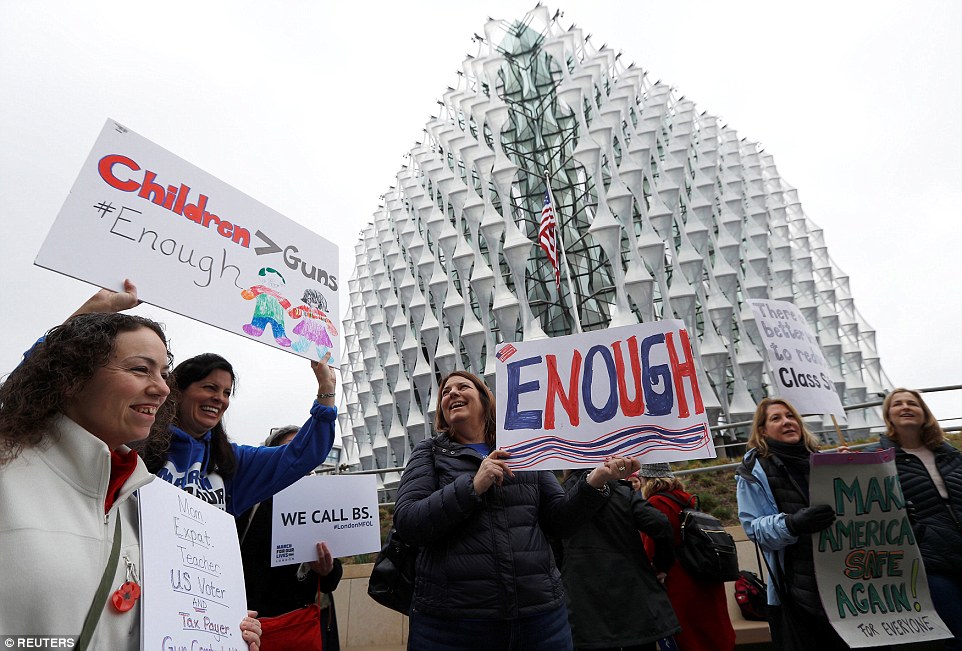 ‘Enough’ and ‘We call BS’ are common signs at the protest for greater gun control outside the US embassy in London. Another reads ‘Make America Safe again’ 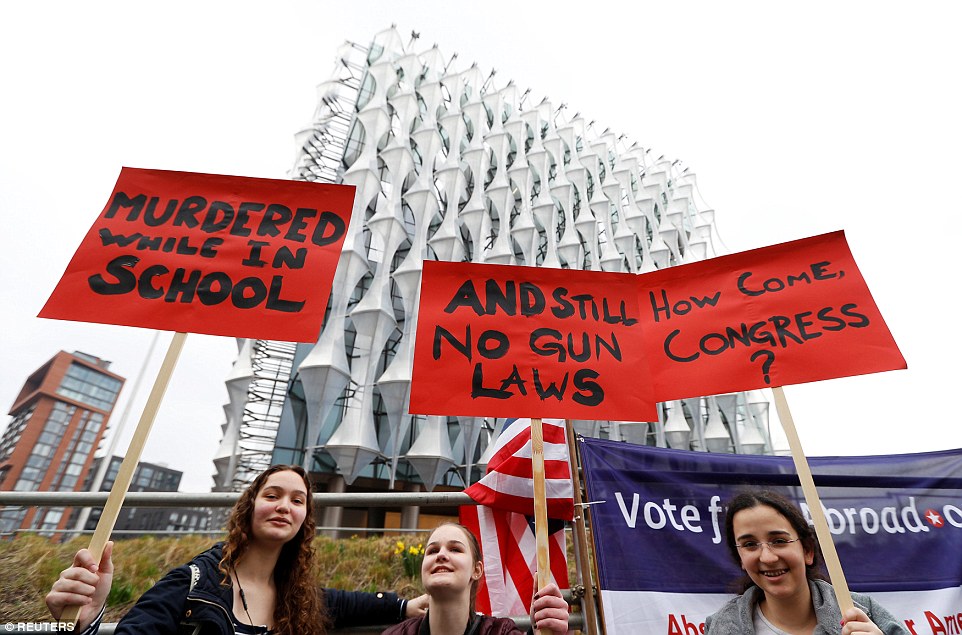 ‘Murdered while in school’, ‘and still no gun laws’, ‘how come congress?’: Three protesters hold up black and red signs that are inspired by recent Oscar-wining film Three Billboards 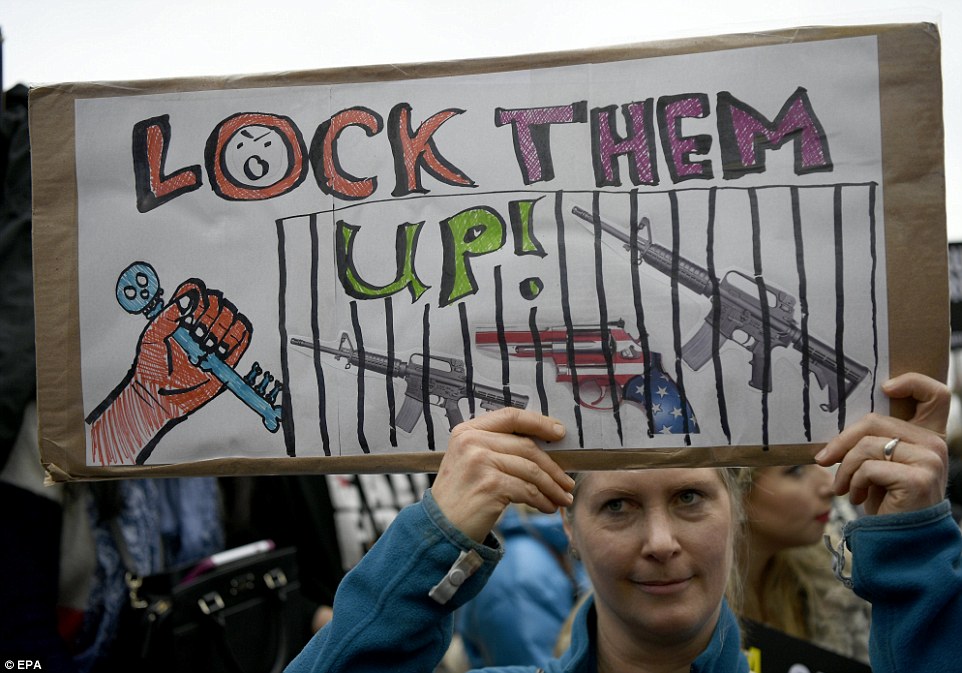 ‘Lock Them Up!’:  A supporter of stricter gun control during a solidarity rally with ‘March For Our Lives’ outside the U.S. Embassy in London

‘We cannot allow one more family to wait for a call or text that never comes. Our schools are unsafe. Our children and teachers are dying. We must make it our top priority to save these lives.’ 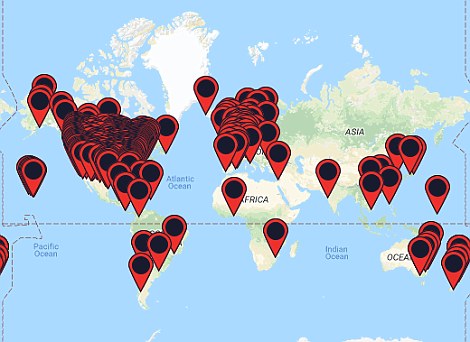 784 protests are taking place around the world on Saturday

It also adds: ‘School safety is not a political issue. There cannot be two sides to doing everything in our power to ensure the lives and futures of children who are at risk of dying when they should be learning, playing, and growing.

‘The mission and focus of March For Our Lives is to demand that a comprehensive and effective bill be immediately brought before Congress to address these gun issues. No special interest group, no political agenda is more critical than timely passage of legislation to effectively address the gun violence issues that are rampant in our country.

‘Every kid in this country now goes to school wondering if this day might be their last. We live in fear.’

David Hogg, one of the Stoneman Douglas survivors who has been at the forefront of the issue ever since, spoke confidently about the event on Saturday morning in an early interview with GMA.

‘Today we are going to start a revolution. This is the beginning of a lifelong marathon not only for me but for my generation.

‘We are sick and tired of the inaction here in Washington and around the country at different state capitals and different cities, of politicians that are owned by the NRA and not listening to the constituents of America. 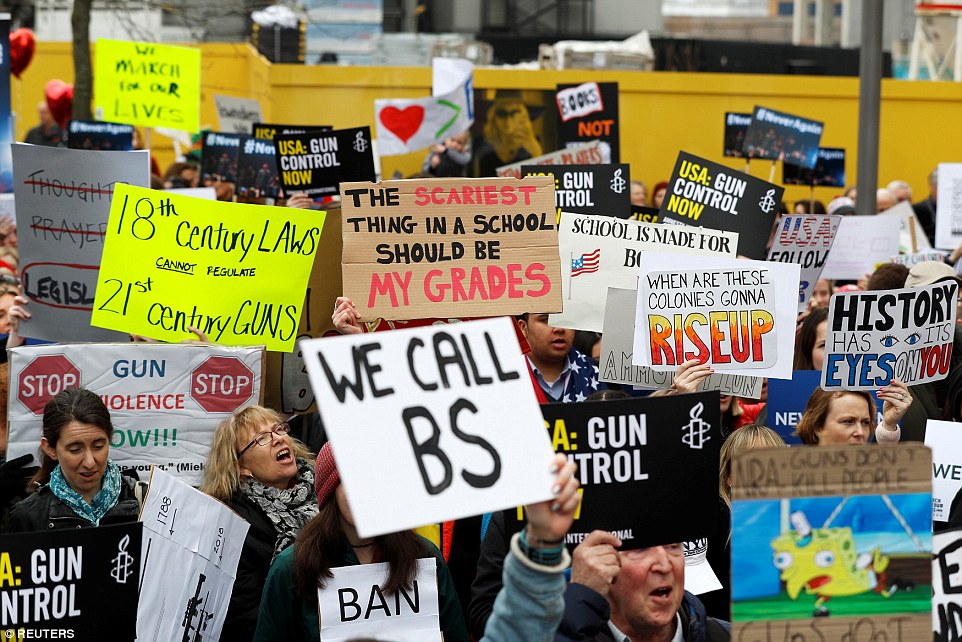 Protesters outside the US embassy in London hold signs including ‘History Has Its Eyes on You’ and ‘when are these colonies going to rise up’ references musical about US founding father Hamilton who died after being shot. The musical’s creator, Lin Manuel-Miranda, an outspoken critic of President Trump, will perform at the DC march 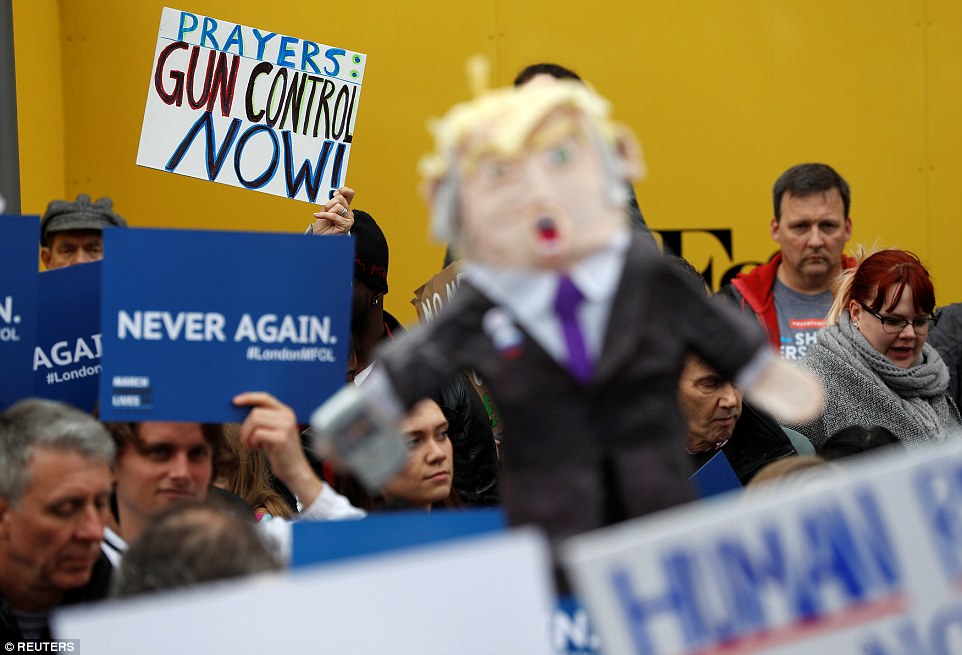 People take part in a demonstration in favour of tighter gun control in the United States, outside the U.S. Embassy in London, signs include: #NeverAgain and Gun control now! As well as models of Predisdent Trump 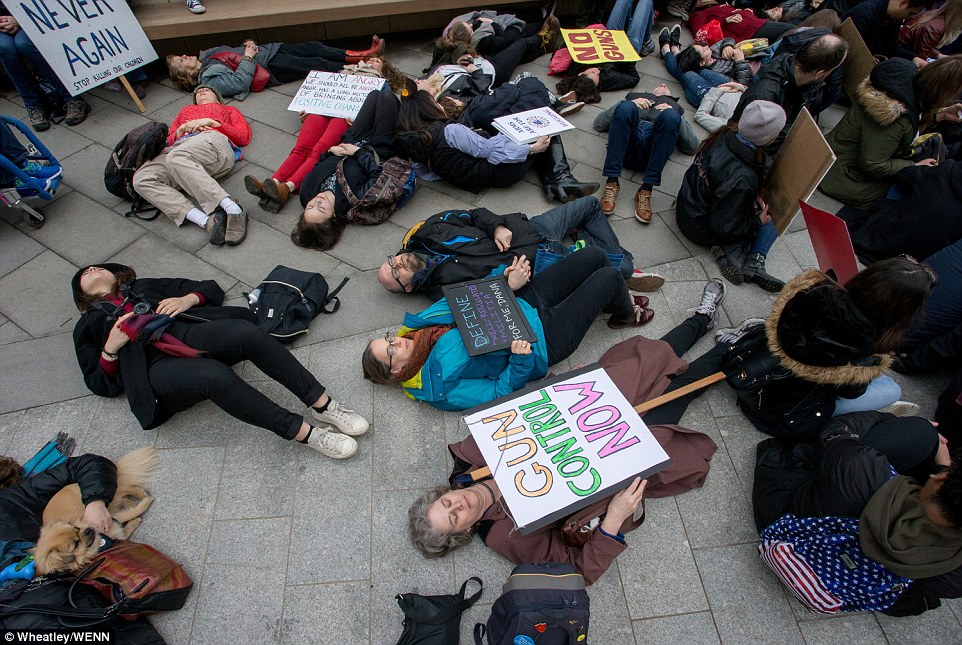 Protesters lie down outside the US embassy in London. The event March for Our Lives is led by young people in over 800 locations around the world 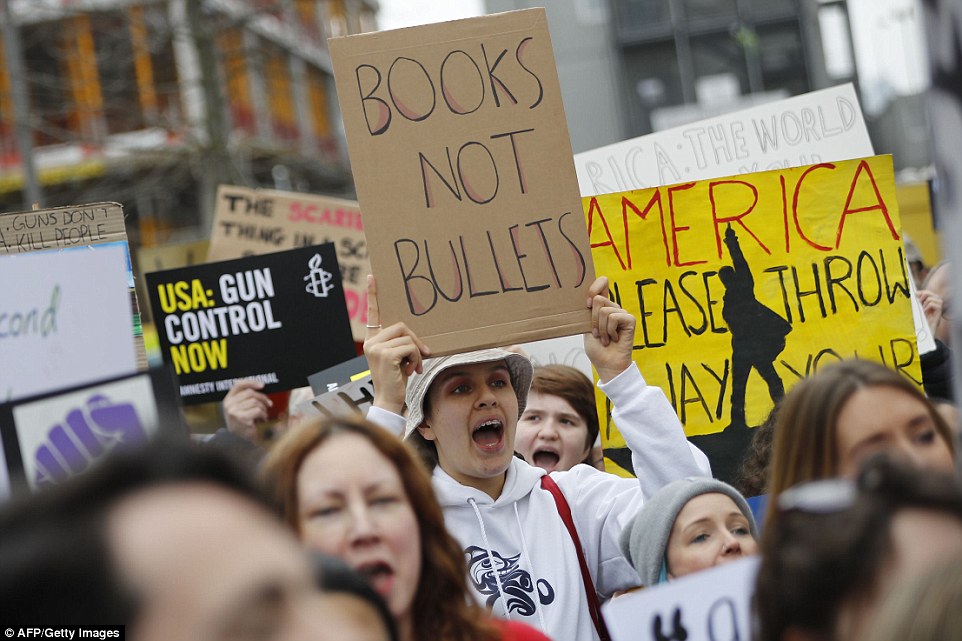 Book not bullets! Protestors carry placards and shout slogans during a demonstration calling for greater gun control, outside the US Embassy in south London 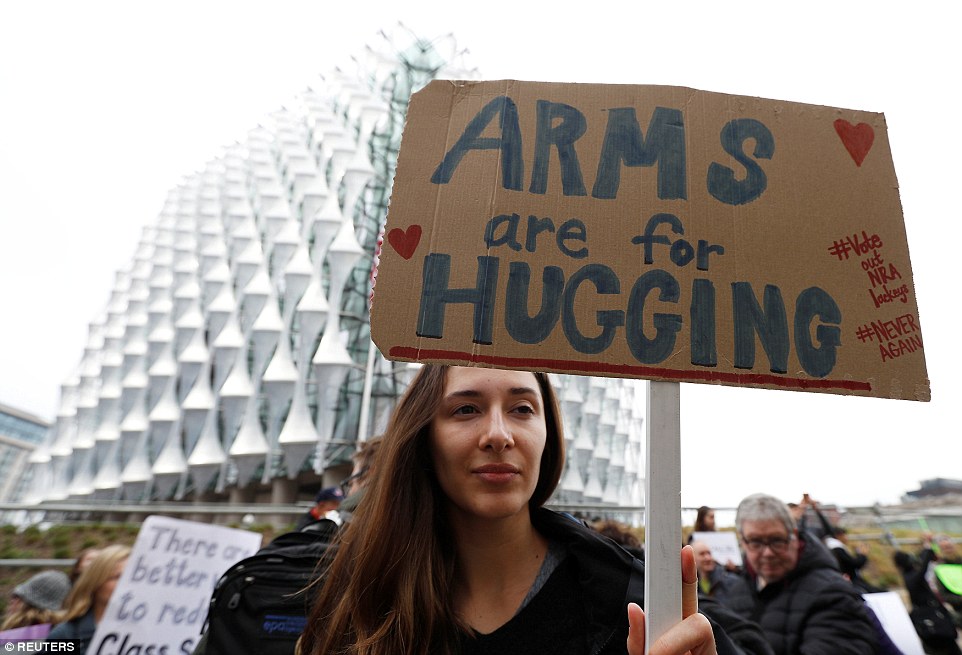 Arms are for hugging! People take part in a demonstration in favour of tighter gun control in the United States, outside the U.S. Embassy in London

‘We are the children. We are making our voices heard and we will change America with or without these politicians and today is the beginning of that revolution,’ he declared.

Hogg, who complained on Friday that his parents ‘don’t know how to use a f****** democracy so we have to’ and said he was ‘tired’ from his advocacy work, said he was saddened by another shooting in Maryland this week which he said forced him to ‘relive’ his own experience.

‘I had to relive a lot of the previous memories from my own school shooting. Everyone takes grief in their own way but for me it was infuriating realizing that because that was a person with a gun, in reality, were they taken out by law enforcement?

‘Yes and I am so glad that they were but they shouldn’t have had to do that in the first place,’ he said.

In an extension of his monologue, he went on: ‘It’s due to a lack of in training, a mental healthcare problem, a gun control problem and an American problem is what we have here.’