Hundreds of people including BBC presenter Andrew Neil have offered to adopt a dog abandoned by his owner in the streets just days before Christmas.

A man was captured on CCTV abandoning the a white and black Staffordshire bull terrier type dog in Stoke-on-Trent.

The footage, recorded at around 5pm on Monday 17 December, shows a car pull up on the corner of a road.

Andrew Neil referred to a journalist as a ‘mad cat woman’ 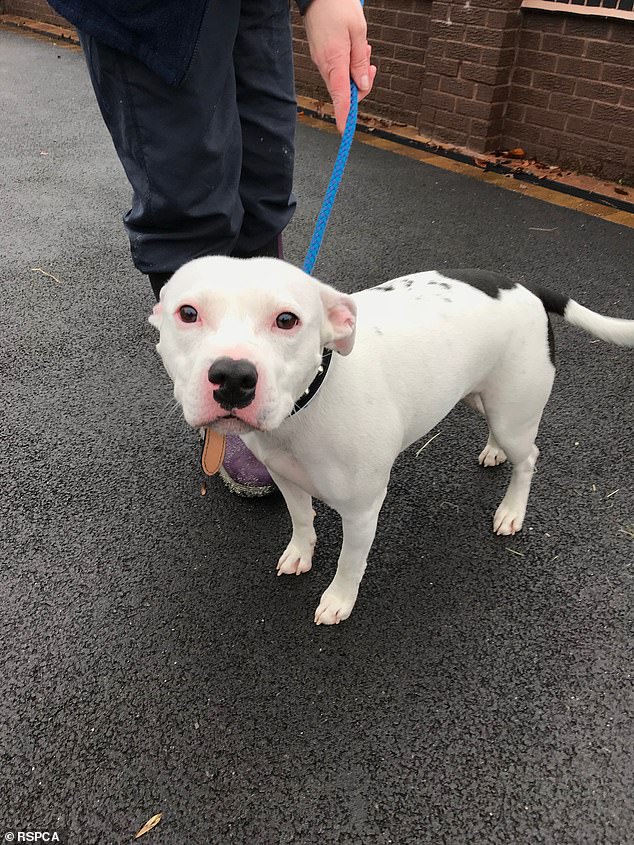 Thankfully a passer-by took him to a local vets who called the RSPCA which is now caring for the dog. Veterinary staff have called him Snoop 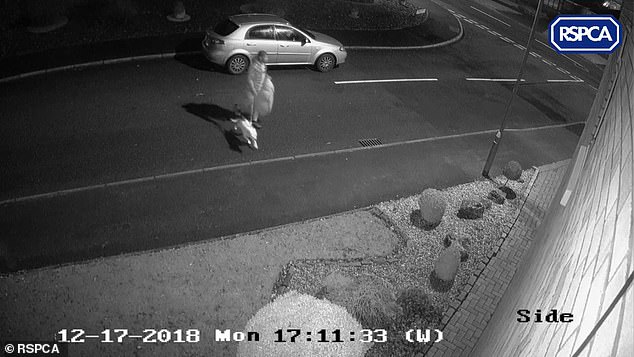 A man is seen leaving the passenger side of the car carrying a dog bed, and leading a white and black Staffordshire bull terrier type dog

A man is seen leaving the passenger side of the car carrying a dog bed, and leading the dog, before unclipping the lead

He then ran back to the car which then  drove away as the distressed dog chases the vehicle and jumps up at the vehicle.

Mr Neil, who hosts This Week, took to Twitter to express his outrage at the man’s actions and said the pooch , which is now in the care of the RSPCA, could be rehomed with him.

He said: ‘So disturb by this footage. I say to RSPCA. If you have trouble rehoming this little dog. I will take it, gladly.’

The RSPCA, which has put out an appeal to find the man responsible for abandoning the dog,  said it has had hundreds of offers to rehome the dog, named Snoop by staff.

The dog was found sitting in the bed by a passer-by during within an hour of it being abandoned.

The passer-by took him to a local vets who called the RSPCA which said the dog is not up for adoption while an investigation into its abandonment was underway, according to The Telegraph. 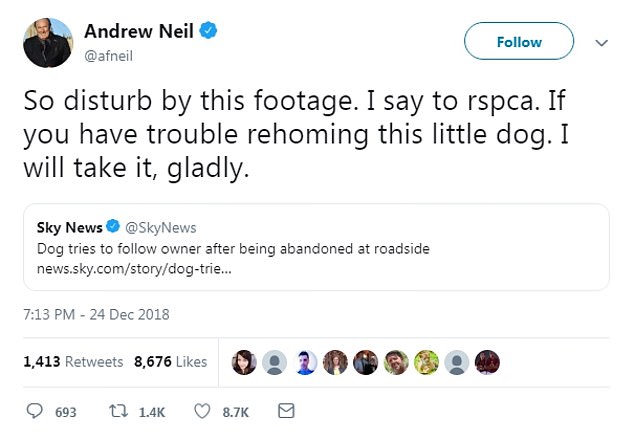 Mr Neil, who hosts This Week, took to Twitter to express his outrage at the man’s actions and said the pooch , which is now in the care of the RSPCA, that it could be rehomed with him 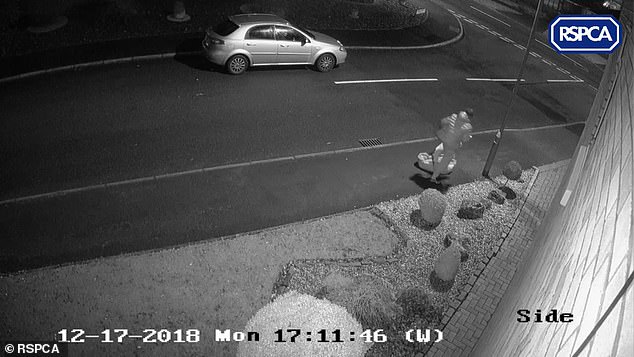 The footage shows him cross the road, leaving the bed on the pavement and unclipping the dog’s lead, before running back to the car which then drives away 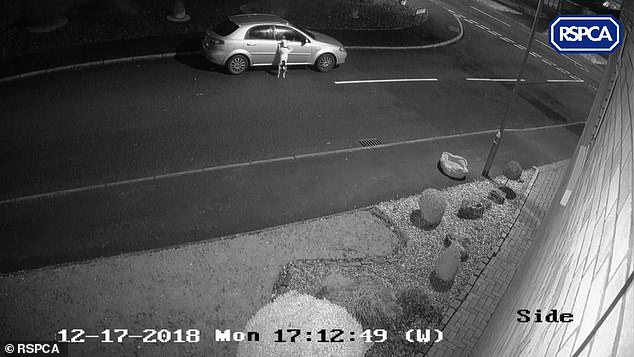 As he drives away, the distressed dog jumps up at the window and chases the car

RSPCA inspector Natalie Perehovsky said: ‘The footage has to be seen to be believed, it’s just awful. To see the poor dog in such obvious distress jumping up at the car as it drives away it just heartbreaking. I can’t understand how someone could do this.

‘The vets scanned his microchip and we have traced two previous owners in the Birmingham area, but do not believe either are the current owners, and therefore not those responsible for abandoning the dog.

‘One man can be seen clearly in the footage dumping the dog, and there is a second person in the driver seat of the car. I am very keen to hear from anyone who recognises the vehicle, the man or the dog.

‘The veterinary staff have nicknamed the dog Snoop, and he is in good condition, thought to be two years old. He is a white Staffie with black marking, and is such a friendly, lovely boy. He’s currently being cared for at a private boarding kennels where he will get all the care he needs whilst I investigate further.

A dog that spent eight years in a kennel has finally found a home – and has now spent her first Christmas with her new owners.

Roxy the staffie is described as highly intelligent but despite her smarts the poor animal has spent almost a decade in a shelter.

Staff at Teckels in Whitminster, Gloucestershire, would bring specialist games to keep Roxy entertained and were amazed at who quickly she could figure them out.

And now Roxy has finally found her forever home and spent her first Christmas at home, after being picked by dog groomer Leanne Wenban. 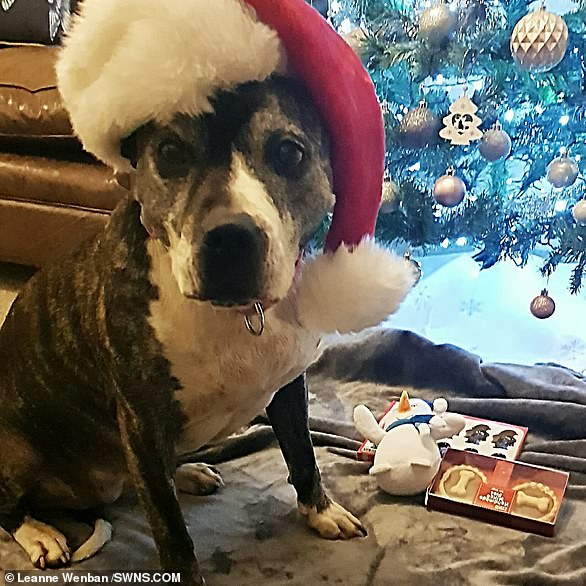 Staffordshire bull terrier Roxy, pictured, has found a home in time for Christmas after spending eight years at a kennels

Ms Wenban said: ‘We saw her on the Teckels website and we saw that she had been at the kennels for a long time.

‘We thought that we would see how it goes and it took around six months to get to where we are now.

‘At first she ignored us but we went up to see her every Thursday and Sunday. 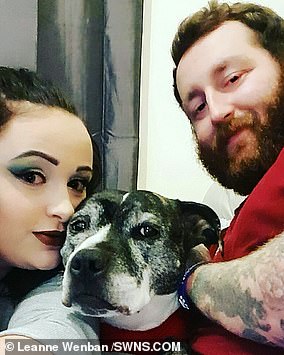 ‘At first we would sit in the cage with her and then eventually we were able to walk and cuddle her.

‘It does not usually take a dog that long to get used to someone but she needed extra time.’

Roxy now has her own bedroom complete with toys and treats, but she is still settling into the new home.

After spending so long in the animal sanctuary, Roxy is still anxious and is not used to the peace and quiet.

Ms Wenban added: ‘At first Roxy came to our house on visits. She is so good and she sleeps a lot.

‘She loves to be tucked up into her blanket.

‘She also has her own bedroom which is like a small child’s bed.

‘Before she was so used to all the noise from the kennels which was fine and what she is or was used to but now I think that she is catching up on the peace and quiet.’

‘Anyone who recognises the vehicle, the dog or the men in the footage can contact me in complete confidence, by leaving me a message on our inspector’s appeal line number on 0300 123 8018.

‘It’s beggars belief that someone could abandon a dog like this at Christmas, but we are so thankful to the kind people who found Snoop sitting sadly in his bed, for taking him to the safety of a vets straight away.’

Based on the last three winters, the RSPCA expect more than 10,000 animals to be taken into our care this winter.

Last year, the animal welfare charity’s 24-hour cruelty hotline received 55,821 calls over Christmas. This year the charity’s Kindness At Christmas fundraising appeal hopes to raise money to help cover some of the costs over the festive period.

A donation of £12 could help buy the gift of comfort for a needy animal, providing a warm blanket, tasty treats and a toy or £24 could give the gift of safety, helping us answer and respond to a call and provide a safe bed.