Hundreds of cats and dogs are found in individual graves at 2,000-year-old ancient Egyptian port

Archaeologists in Egypt have discovered what they believe to be the world’s oldest known pet cemetery.

Nearly 600 cats, dogs and monkeys were found carefully laid in individual graves in Berenike, a remote seaport on the western coast of the Red Sea.

Some of the animals were still wearing collars and other adornments, and others showed evidence of illnesses indicating they had been cared for by humans.

But the lack of mummification or sacrifice at the 2,000-year-old site suggests these were companion animals, not used in rituals or venerated as gods.

The remains of some 588 cats, dogs and monkeys were found in a site in the ancient Egyptian port of Berenike in what archaeologists believe may be the oldest known pet cemetery, Pictured: A cat skeleton from Berenice wearing a bronze collar

Berenike was founded in 275 BC by Pharaoh Ptolemy II Philadelphus, who named it after his mother, Berenice I of Egypt.

It was a bustling Roman port, and excavations have uncovered ceramics, spices, fabrics and other goods from as far away as India, as well as luxury items from across the empire.

Berenike was also a way station for ‘war elephants’ from Africa that would be sent out to fight in various battles.

Archaeozoologist Marta Osypinska and her archaeologist husband, Piotr, originally discovered the cemetery site in 2011 while excavating a Roman trash dump on the edge of town. 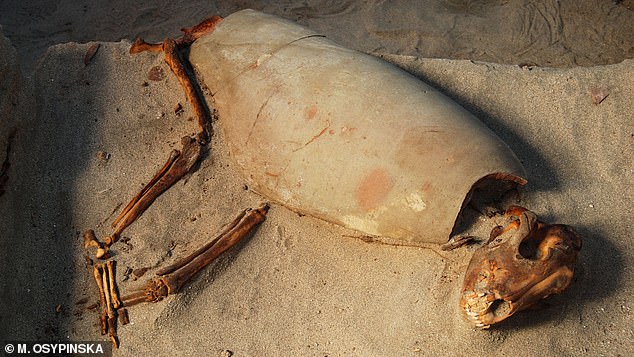 A number of the dogs found on the site had medical issues that they couldn’t have survived without human caregiver. Many, like this dog, were buried under pottery ‘which formed a kind of sarcophagus’

In 2017, they unearthed the remains of about 100 animals, mostly cats, and began to form a picture of what the area was used for.

Other experts still believed they may have simply been discarded trash.

It wasn’t uncommon to bury pets in ancient Egypt but usually they’d be interred with their owners, not placed in a dedicated space.

‘At first, some very experienced archaeologists discouraged me from this research,’ Osypinska told Science.

They insisted there was little to learn about Berenike culture from studying pets.

‘I hope the results of our studies prove that it’s worth it,’ she told the magazine. 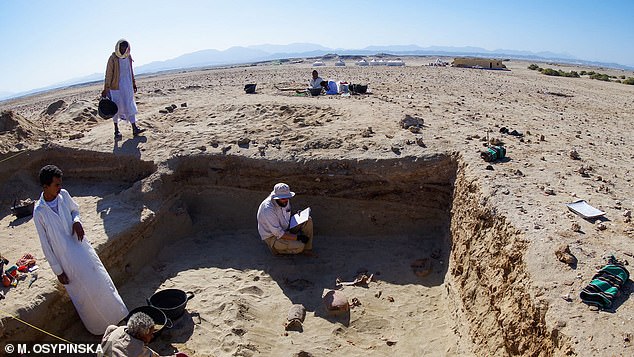 Marta and Piotr Osypinska first unearthed the site in 2011 but didn’t immediately determine its purpose as a pet cemetery. Even after more than 100 animal remains were discovered there, experts discouraged their research

According to her research, published in the journal World Archaeology, the ‘pet cemetery’ at Berenice functioned for about a hundred years, from the mid-first century to the mid-second century.

It is believed that the ancient Egyptians cared for domesticated cats as long ago as 3700 BC.

Until recently, it was thought that cats were first domesticated in the country around 1950 BC.

But evidence of pet felines has also been found in China, indicating farmers cared for cats in 3300 BC. 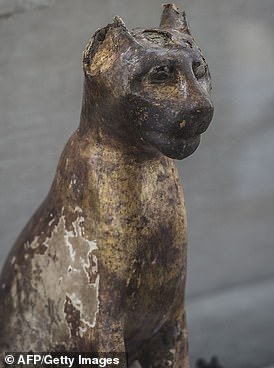 As a revered animal, cats could receive the same mummification as humans. Their remains and  were often dedicated to the goddess  Bastet. Pictured: Astatue found at Saqqara

Cats were also used as religious sacrifices in Ancient Egypt over 5,500 years ago.

Known as ‘Mau,’ they were important in later Egyptian society and became symbols of grace.

Two goddesses took the form of cats – Mafdet, a lion-headed goddess of justice and execution, and Bastet, representing fertility and motherhood.

As a revered animal, cats could be mummified after death and their remains were often dedicated to Bastet.

It is thought there were four main reasons for mummifying animals: To be worshiped as manifestations of certain gods, as offerings to the gods, to provide food in the afterlife and to  allow beloved pets to live on in the afterlife.

In all, the team has found 585 animals to date, some of which are not native to Africa.

The vast majority — more than 90 percent — were cats, though there were also dogs, baboons, and two species of macaques native to the Indian subcontinent.

Of the dogs, most were light-colored Spitz types, though there were also toy dogs and larger canines more like mastiffs.

Many of the cats wore metal collars or necklaces threaded with ostrich-shell beads.

Osypinska told Science many of the animals were covered with textiles or pottery, ‘which formed a kind of sarcophagus.’

The animals were not haphazardly discarded, but carefully laid in individual pits.

One feline was placed atop the wing of a large bird, the magazine reported.

Consulting with a veterinarian, Osypinska’s team was able to determine several of the animals had illnesses that would have killed them without human caregivers.

The remains of a dog that suffered from bone cancer were found in a mat of palm leaves covered with an amphora, according to Archaeology News Network.

Other canines were missing most of their teeth, had gum disease or showed signs of joint degeneration.

‘We have individuals who have very limited mobility,’ Osypinska said. ‘Such animals had to be fed to survive, sometimes with special foods in the case of the almost-toothless animals.’

The kind of devotion required to nurse an old pet reveals the people of Berenice had strong emotional ties with domesticated animals, according to the report.

Archaeologists have uncovered mass animal graves in Egypt before, but almost always the creatures were either sacrificed or venerated, not treated as pets.

Dozens of mummified cats were found in 2018 on the edge of the King Userkaf pyramid complex at the ancient necropolis of Saqqara, south of Cairo.

Several years earlier a labyrinth of sacred tunnels was uncovered in the same region, packed with the mummified remains of up to eight million dogs, some of which were just hours old when they were sacrificed.

Other canines were treated as living representatives of the dog-headed god Anubis, living out their lives in the nearby temple before being preserved and laid to rest in the network of tunnels.

The people of Berenike treated these animals as loving companions, Osypinska insists, ‘They weren’t doing it for the gods or for any utilitarian benefit.’