Thousands of families have been left out of pocket coming into Christmas after a dodgy hotel booking website dropped their reservations.

HotelQuickly, a booking platform listed as an option on TripAdvisor with 640,000 followers on Facebook, sent customers an email advising their bookings had been cancelled, but claimed they would be provided with vouchers for credit on the site.

Blaming the cancellations on an ‘unforeseen issue’, the company said they were ‘working very hard to come up with a manageable solution’ – but customers say they haven’t heard a peep from the HotelQuickly since and are still waiting to see what’s happened to the thousands of dollars they gave to the company.

School teacher Debbie Hamilton told Daily Mail Australia she was planning a holiday with her husband over New Year’s, and had booked accommodation at two luxury resorts through Hotel Quickly, which she spotted on TripAdvisor. 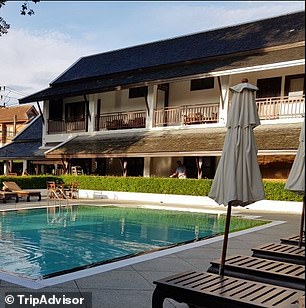 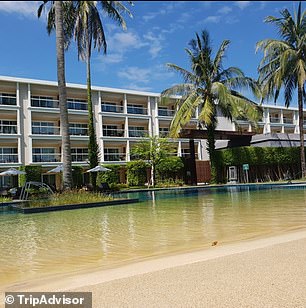 Mrs Hamilton had booked accommodation at two luxury resorts, at Chiang Mai (left) and Phuket (right). Both bookings were cancelled without warning. Daily Mail Australia is not suggesting either hotel has any financial difficulties or have any blame in the cancelled bookings

‘I booked one hotel in August, and another in September – one in Chang Mai and one in Phuket,’ the mother-of-one from Western Australia said.

Mrs Hamilton was looking forward to her relaxing getaway, but says on December 9, she woke up to discover everything had been cancelled.

‘I rang both hotels, and they both said the booking had been made but cancelled on December 6,’ she said.

‘They said they hadn’t received any money from them and hadn’t heard from them.

‘I frantically re-booked straight away, but had to pay an extra $400 [as well as the original price] all up for the booking, as it was peak time.’

Mrs Hamilton said she breathed a quick sigh of relief when she saw the $1200 she had spent with Hotel Quickly eventually returned to her in vouchers – but panicked again when she realised the vouchers were nothing but a broken link.

The mother-of-one said she contacted her bank straight away, sending through emails she had exchanged with the company and stressing the ‘vouchers’ she had been given were broken. 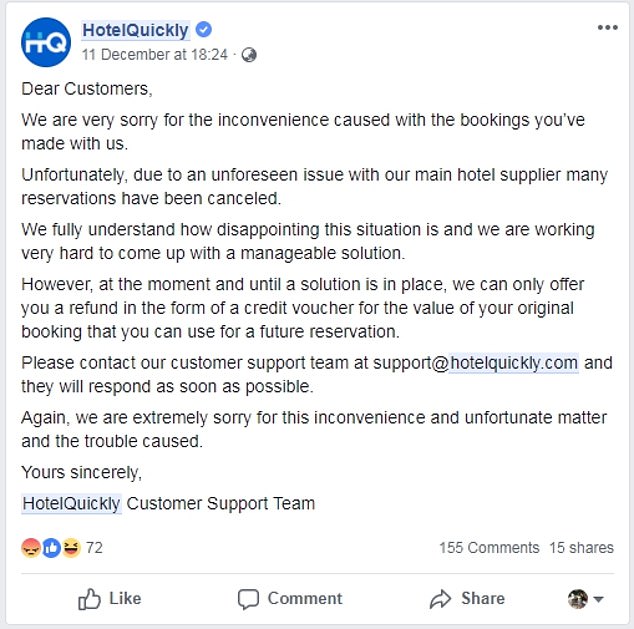 HotelQuickly, a booking platform supported by TripAdvisor with 640,000 followers on Facebook, sent customers an email (pictured) advising their bookings had been cancelled, but they would be provided with vouchers for credit on the site

‘I was in tears that whole Sunday,’ she said.

‘My husband said to me when I settled down: “I haven’t seen you in tears for years – I didn’t know what to do”.

‘I felt like someone had come in and burgled me. I felt very vulnerable and I was panicking that the bank wouldn’t come to the party.’

Mrs Hamilton isn’t alone in her experience – in fact, compared to some, she got off lightly.

One man said the company cancelled his hotel booking just one hour before he boarded a plane, while others have lost thousands of dollars.

Gill Fernando, who reviewed the site on Facebook, said he had booked his hotel in August and paid in full, only to arrive in December to find his booking had been cancelled.

On review website Trust Pilot, a staggering 87 per cent of the 943 reviews rated their experience with HotelQuickly as ‘bad’, the lowest possible option.

Scores of people detail how they had been left thousands of dollars in debt as a result of the service in scathing reviews online.

On review website Trust Pilot, a staggering 87 per cent of the 943 reviews rated their experience with HotelQuickly as ‘bad’

While the site appears to still be online, searches for hotels around the world on multiple dates come up with no results – meaning anyone whose vouchers did work would still be left out of pocket.

Mrs Hamilton said the experience has left her shaken and very wary of using the internet to book her holidays.

‘My husband and I travel regularly, and I always book accommodation through Trip Advisor, but I don’t know if I can trust them anymore,’ she said.

‘I have a travel agent friend who always says “you should come to me” – at first you think [booking online] is cheaper, but now I think it’s not worth the stress.’

A spokesperson for the Australian Competition and Consumer Commission told Daily Mail Australia they had received ‘so many’ complaints about Hotel Quickly, and advised anyone who had been affected to call their bank.

‘People who have been impacted by the Hotel Quickly cancellations should talk to their bank about getting a credit card charge back or contact their state consumer affairs authority if they are having issues getting a refund,’ they said.

‘It is always a good idea to research online deals to determine if they are legitimate, including checking directly with the accommodation provider.’ 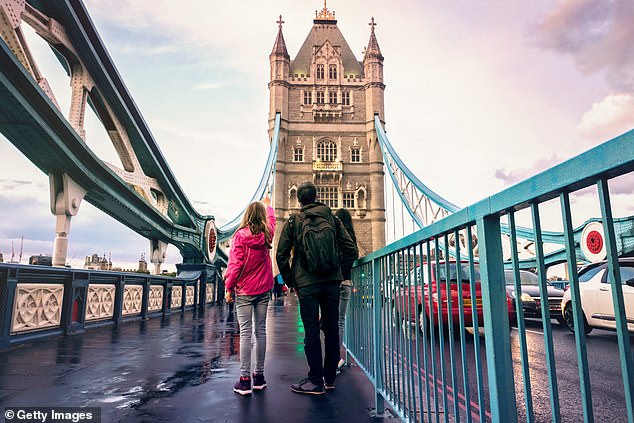 One man said the company cancelled his hotel booking just one hour before he boarded a plane, while others lost thousands of dollars (stock image)

When Daily Mail Australia contacted HotelQuickly for comment, a spokesperson replied via email in broken English:  ‘I will escalate this to my manager and he will do the necessary [sic] to escalate this to the top management.’

WHAT TO DO IF YOU’VE BEEN SCAMMED

2. If a payment was already processed on your booking, please contact your Credit Card provider to dispute the charge from HotelQuickly letting the credit card company know you believe the booking has not or will not be fulfilled. If a payment has not yet been charged to your account, please contact your Bank or Credit Card provider to ensure any future payment is blocked.

3. Check your travel insurance documentation to see if you may be eligible for compensation.

4. Look for alternative accommodation as soon as possible.

‘Please bear with me and I will be contacting you with the person who can provide you with appropriate information.’

The company did not respond further.

TripAdvisor confirmed they had suspended HotelQuickly from their platform after becoming aware of the difficulties last week.

“We are very concerned to hear about the difficulties some HotelQuickly customers are experiencing with their bookings,’ a spokesperson told Daily Mail Australia.

‘TripAdvisor works hard to ensure all suppliers displayed on our price comparison tool comply with our policies. Whenever we become aware that an accommodation supplier or online travel agent is no longer able to honour bookings or offer adequate customer support, we are prepared to take swift action to remove their prices from our site.

‘In this case, we became aware of customer issues affecting HotelQuickly in the first week of December and took immediate action to suspend the company from our platform.’