Tocilizumab, marketed as Actemra, will be given to hundreds of critically ill coronavirus patients in the NHS

Hundreds of critically ill coronavirus patients in the NHS will be given an arthritis drug as part of the world’s largest trial of promising therapies.

Tocilizumab, sold as RoActemra or Actemra, will be administered to patients whose lungs have become severely inflamed due to a dangerous immune reaction caused by the virus.

It is hoped the arthritis drug, given via an IV drip, can help to calm the deadly reaction, which sees inflammatory molecules flood the lungs and fill them with fluid.

Tocilizumab is the latest drug to be added to the Recovery trial, which is also testing four other promising treatments, including HIV, malaria and antibiotic medications.

The trial has already recruited about 6,000 NHS patients in five weeks, making it the largest study looking at repurposing existing therapies to treat the incurable virus.

Patients from almost every NHS trust in the country are taking part in the trial, which is being run by Oxford University.

Martin Landray, a professor of medicine and epidemiology at the Nuffield Department of Population Health at Oxford, told The Times: ‘The transition between just having a nasty viral infection and needing ventilation is accompanied by this hyper-inflammatory response.

‘There’s good grounds for believing that if we can block that, then this might reduce the risk of going on to ventilation or dying.

Tocilizumab works by reducing levels of IL-6 protein in the body, which people with rheumatoid arthritis or another autoimmune conditions have too much of.

If there is an abundance of IL-6, it can cause inflammation and damage. Tocilizumab blocks the effects, and has become a go-to for inflammatory disease treatment.

It’s thought the drug can prevent an overreaction of the immune system seen in some coronavirus patients.

Called a ‘cytokine storm’, the body’s immune response can go into overdrive and produce a flood of inflammatory molecules.

It releases these molecules into the lungs where the virus has burrowed deep, clogging up the tiny air sacs in the organs and making it hard to breathe.

The overreaction of the immune system is considered a major factor behind catastrophic organ failure and death in some coronavirus patients.

The Recovery trial will also look at the Donald Trump-touted hydroxychloroquine, the HIV drug lopinavir-ritonavir, the steroid dexamethasone and azithromycin, an antibiotic that may kill off viruses.

It comes as the NHS is now asking coronavirus survivors to donate blood in hope of trialing a promising plasma-based therapy on infected patients.

Health regulators say the treatment – convalescent plasma – is already approved for British medics to use in tackling COVID-19.

NHS Blood and Transplant says it is waiting on approval for a trial of the therapy, to see if it can boost recovery speed and survival odds.

People who have recovered from COVID-19 have antibodies in their blood which can fight the virus. These could help a patient currently ill with the virus.

Trials of the therapy are underway worldwide, but British scientists fear the UK has been too slow to adopt it. 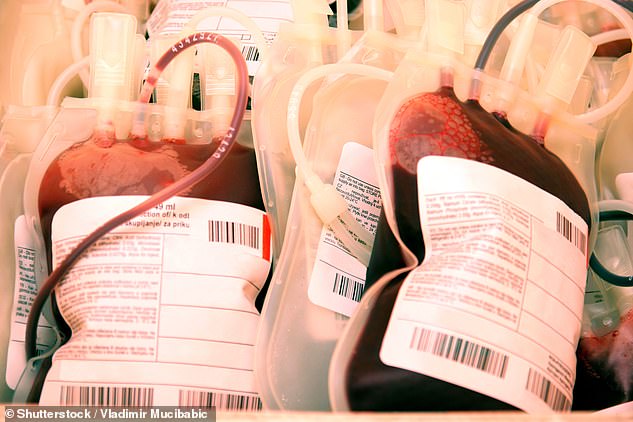 Wales will be the first in the UK to convalescent plasma therapy (CP) for the treatment of COVID-19 patients.

Patients at the University Hospital of Wales (UHW) in Cardiff will be injected with blood plasma taken from people who have already recovered from the killer infection.

Recovered patients are being invited by letter, if eligible, by Public Health Wales to donate blood to the scheme.

The plasma will be collected and processed by the Welsh Blood Service from donors who have fully recovered and are virus free.

It will be collected no sooner than 28 days after recovery and has to match the established safe blood donor selection criteria.

Welsh health authorities are set to collect blood donations and give them to patients in ‘the near future’.

The Welsh government said the country was ‘playing a leading role’ in a UK-wide programme to test CP.

Senior professional advisor to the Chief Medical Officer, Dr Gill Richardson, said: ‘The Welsh Government has worked at speed with our expert scientists at the Welsh Blood Service, the Department of Immunology at University Hospital of Wales, critical care consultants and Public Health Wales to launch this innovative scheme.

‘In the absence of any current vaccine or antiviral therapy, it has significant potential to aid the recovery of patients.’

UHW is ‘at the forefront’, in part due to the expertise of its staff, according to Dr Richard Skone, clinical board director for specialist services, the BBC reported.

Convalescent plasma therapy (CP) was given the green light by medical regulators in the UK in early March in anticipation of the crisis.

It means the NHS patients are allowed to receive the treatment, if a trial is set up. But no large-scale trials have begun yet.

It’s not clear how many British patients have – or could have – benefitted from the treatment so far, but scientists say CP could be the difference between life or death.

Health regulators in the US followed the UK to approve CP, but trials are already underway involving more than 1,500 hospitals.

NHSBT is now appealing to people who have recovered from COVID-19 to see if their blood can help critically ill patients in the UK.

‘NHS Blood and Transplant is preparing to collect COVID-19 convalescent plasma from people who have recovered from this illness,’ a spokeswoman said.

‘We envisage that this will be initially used in trials as a possible treatment for COVID-19.

‘If fully approved, the trials will investigate whether convalescent plasma transfusions could improve a COVID-19 patient´s speed of recovery and chances of survival,’ the blood service said.

‘We are working closely with the government and all relevant bodies to move through the approvals process as quickly as possible.’

People who have recovered from COVID-19 can register with the NHS if they are interested in donating plasma. They should not just turn up at blood donation centres, NHSBT said.

Antibodies rise steadily in the blood stream when someone is ill and are thought to peak between 21 and 28 days after recovery, according to the NHS.

Donors must have tested positive for the illness either at home or in hospital, but should now be three to four weeks into their recovery, ideally 29 days.

According to an email sent by NHSBT, plasma can be taken by a machine similar to those used in regular platelet donation.

The announcement follows concerns the NHS weren’t being quick enough to start trials of CP, as the coronavirus death toll reached 16,060 yesterday.

Professor Sir Robert Lechler, president of the Academy of Medical Sciences, told the BBC:  ‘I think there are many aspects of this pandemic we’ll look back on and say, I wonder why we didn’t move a little bit faster. I think this could be one of those.

‘Let’s hope that the NHSBT national trial gets into gear really quickly.’

Professor Lechler is eager to use plasma for seriously ill patients that have no other treatment options, while a larger national trial is getting under way.

He said: ‘I would be disappointed if we weren’t able to see some patients given this form of therapy within a couple of weeks.’

Another leading doctor has said it was ‘incredibly frustrating’ only a handful of patients were getting the treatment, first used 100 years ago.

Dr Colin Hamilton-Davies, of Bart’s Hospital in London, told SkyNews: ‘We could be administering it, not just to one or two people, but hundreds of patients.

‘It’s not only myself, but many colleagues are saying “why aren’t we looking at this in greater depth and in a faster timeframe?”

‘There is a research framework which is up and running, which it may or may not become part of.’

Dr Hamilton-Davies added: ‘I very much hope it does. This is something we could get up and running very quickly indeed.’