Hundreds of demonstrators protest against Crown Prince’s visit to Tunisia

Hundreds of Tunisian protesters marched through the capital Tunis in opposition to a planned visit Tuesday by Saudi Crown Prince Mohammed bin Salman, urging justice over the murder of journalist Jamal Khashoggi.

The demonstrators shouted ‘Go away assassin!’ and held placards with slogans including ‘The people want Bin Salman to be judged’, ‘No to the killer of Yemeni children’ and ‘You’re not welcome’.

It was the second protest in as many days against the de facto Saudi ruler, who was expected to fly into Tunis from Egypt on Tuesday for talks with President Beji Caid Essebsi as part of a regional tour. 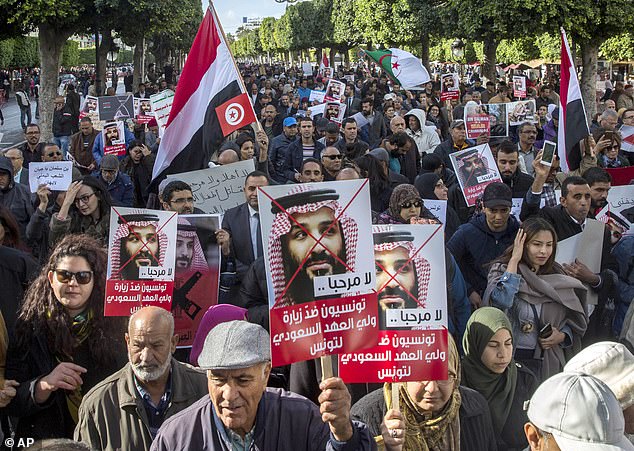 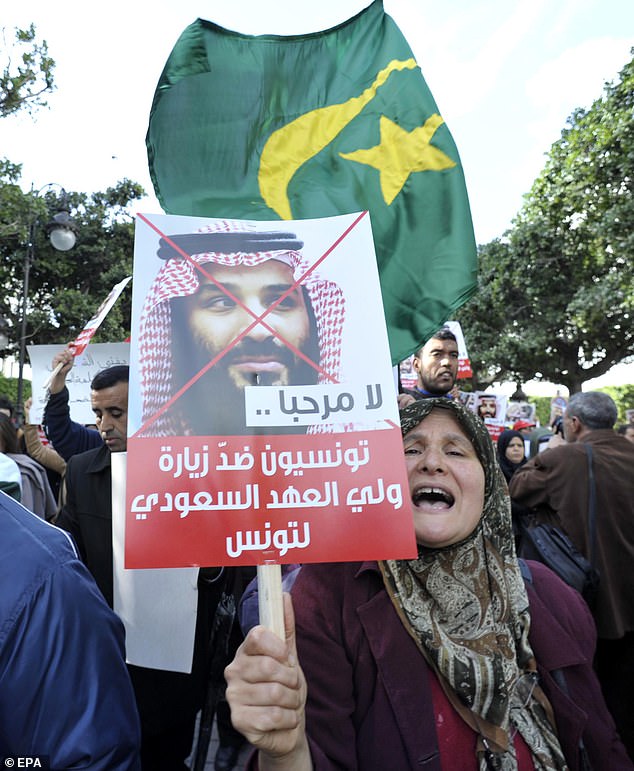 A protester holds up a placard with an inscription reading in Arabic: ‘Tunisians against Saudi Crown Prince visit’ in the Tunisian capital Tunis today 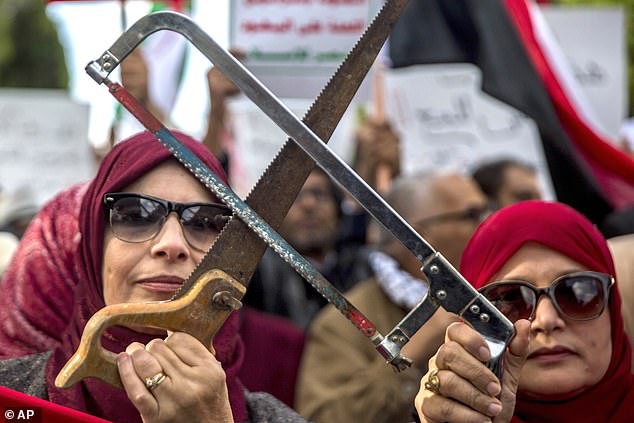 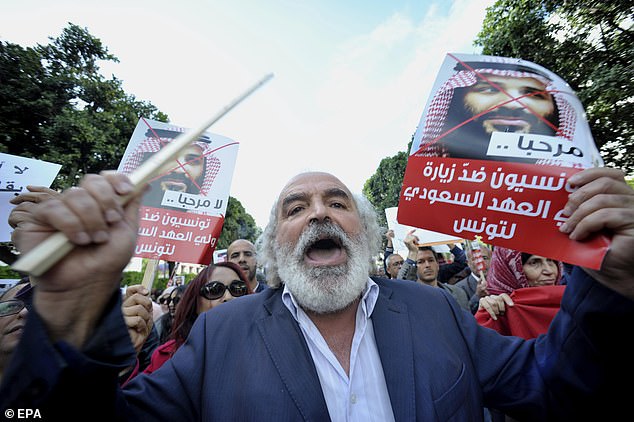 Khashoggi’s murder inside Saudi Arabia’s Istanbul consulate on October 2 has led to international scrutiny of the gulf kingdom, its human rights record and its war in Yemen

‘It’s inhuman to see an Arab leader killing his brothers in Yemen, and the murder of a journalist is the icing on the cake,’ said Basma Rezgui, a teacher brandishing a red-stained saw.

Saudi Arabia has faced intense global criticism over the killing of insider-turned-critic Khashoggi in its Istanbul consulate on October 2. 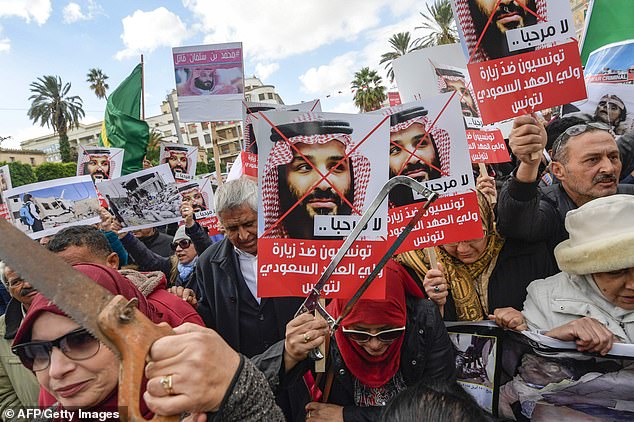 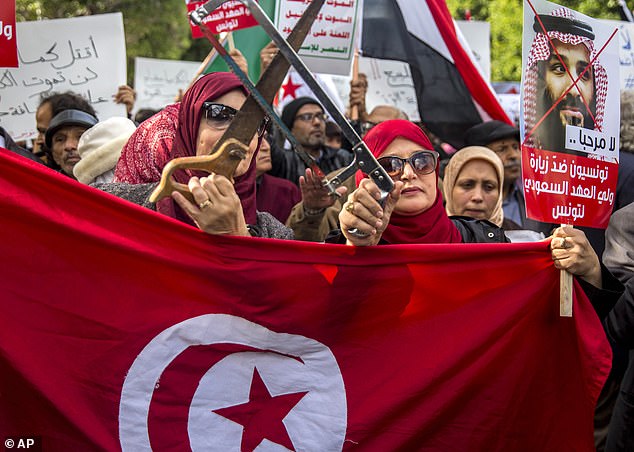 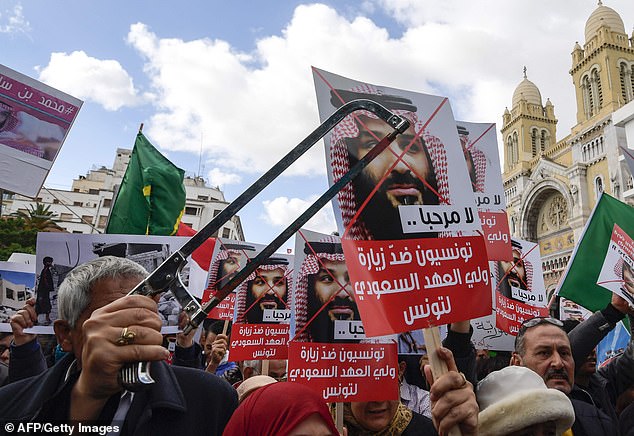 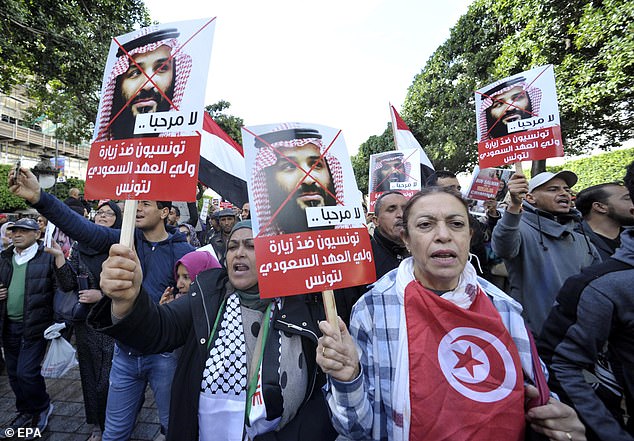 Khashoggi’s remains have not yet been discovered. He was reportedly dismembered in what Saudi Arabia said was a ‘rogue’ operation, but CIA analysis leaked to the US media pointed the finger at Prince Mohammed.

Despite this, US President Donald Trump has said he will not punish the Saudis for the murder of the Washington Post columnist.

Trump said last week in a statement that drew both domestic and international criticism: ‘The United States intends to remain a steadfast partner of Saudi Arabia to ensure the interests of our country, Israel and all other partners in the region.’

The crown prince’s visit will be the first by a Saudi royal to Tunisia since the 2011 revolution deposed longtime dictator Zine El Abidine Ben Ali, who fled to Saudi Arabia. 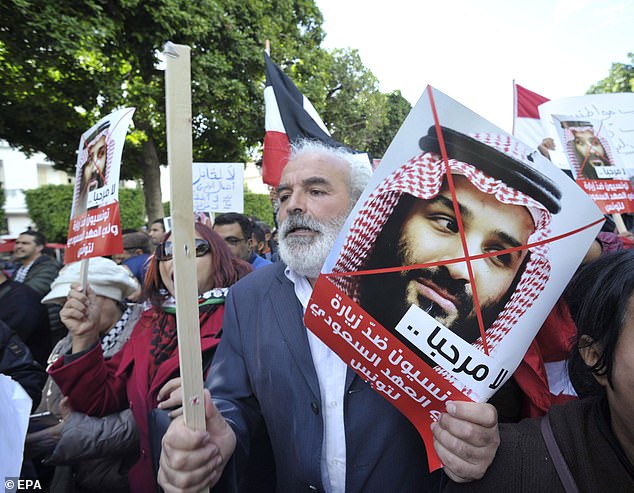 Tunisians gathered to protest against the planned visit of Saudi Crown Prince Mohammed bin Salman, aka MbS, who is on a regional tour before attending the G20 summit in Argentina 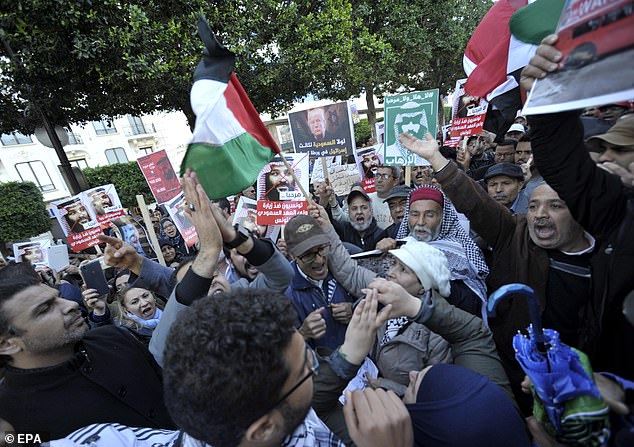 Khashoggi was reportedly dismembered in what Saudi Arabia said was a ‘rogue’ operation, but CIA analysis leaked to the US media pointed the finger at Prince Mohammed 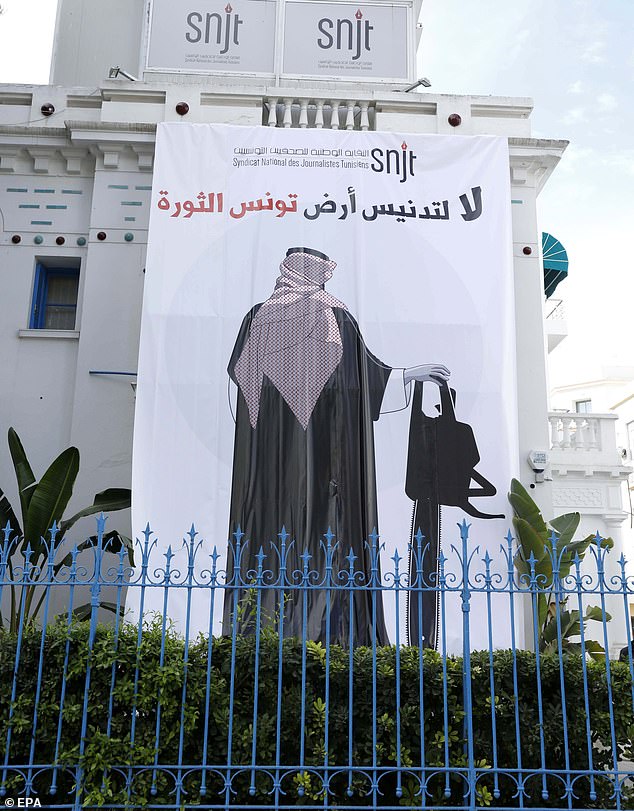 A poster depicting Saudi Crown Prince Mohammed bin Salman with a chainsaw and inscription reading in Arabic ‘no to the desecration of Tunisia, the land of the revolution’ on the National Syndicate of Tunisian Journalists headquarters in Tunis 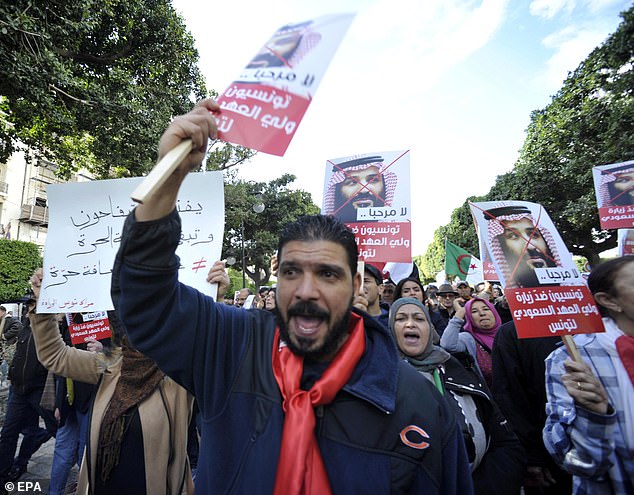 This was the second protest in as many days against the de facto Saudi ruler, who was expected to fly into Tunis from Egypt today

The Saudi crown prince has also held talks in the United Arab Emirates, Bahrain and Egypt on his first foreign tour since the Khashoggi affair erupted.

‘The stability and security of Saudi Arabia is an integral part of Egypt’s security,’ Sisi was quoted as saying. 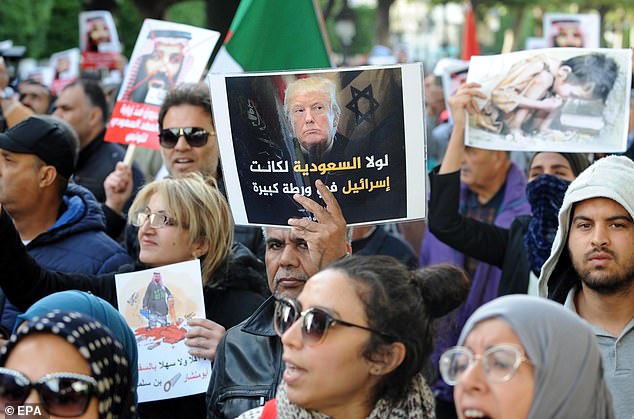 Tunisian protesters hold placard with inscription reading in Arabic ‘If it were not for Saudi Arabia, Israel would have been in trouble’ 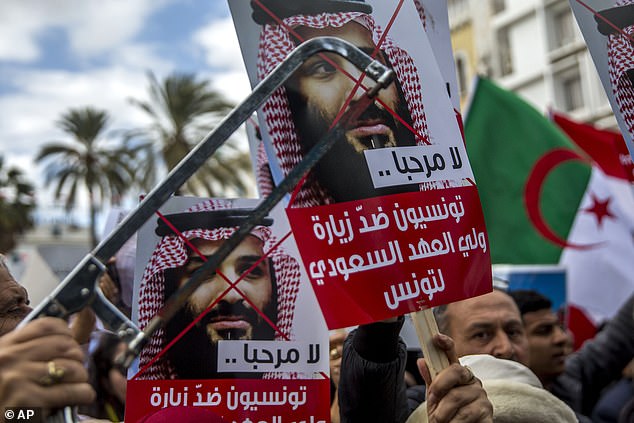 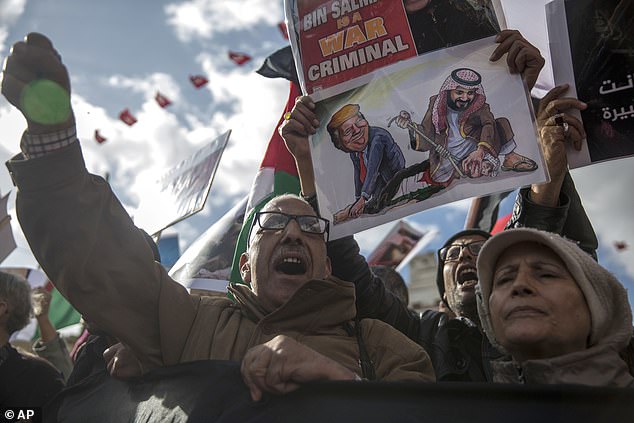 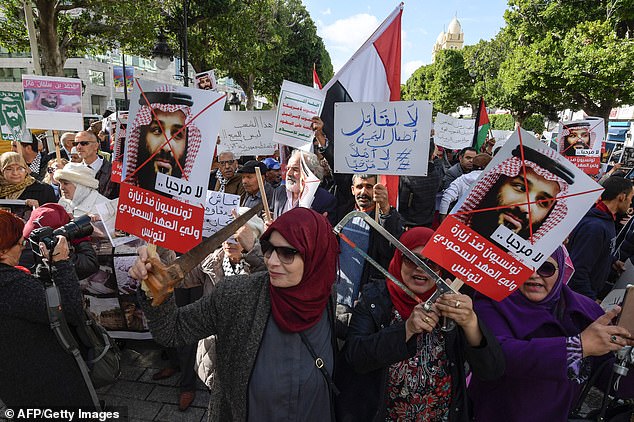 Meanwhile advocacy group Human Rights Watch (HRW) wrote to a federal prosecutor arguing that the Argentinian courts should prosecute the crown prince under Argentinian law when he arrives there later this week.

The writ issued by HRW to a federal prosecutor cites the killing of Jamal Khashoggi and alleged incidents in Yemen war, but it is unclear whether there is enough evidence to charge him at this moment in time.