‘Thank god you guys found it’: Hundreds of people claim to be the owner of a stunning lost bracelet with 40 diamonds in it

A police appeal to track down the rightful owner of a beautiful diamond bracelet has sparked hundreds of people to claim the dazzling piece of jewellery is theirs.

Hawkesbury Police took to its Facebook page on Monday seeking help from the public about a tennis bracelet which was found in the Sydney area last December.

The 20cm long bracelet consists of 40 2mm diamonds set in a square link made from white gold.

The value of the bracelet is unknown.

No further details about the bracelet have been disclosed in the hope its rightful owner will be able to prove it’s theirs.

‘No report has been received regarding the loss with police unable to identify the owner,’ the police Facebook post states.

‘Police are making this social media appeal in an attempt to return the item to the owner, upon satisfactory proof of ownership.’

‘Thank god you guys found it I’ve been looking for it everywhere it was my favourite on,’ one man commented.

Another added: ‘I’ll be happy to own it and promise not to loose it again.’ 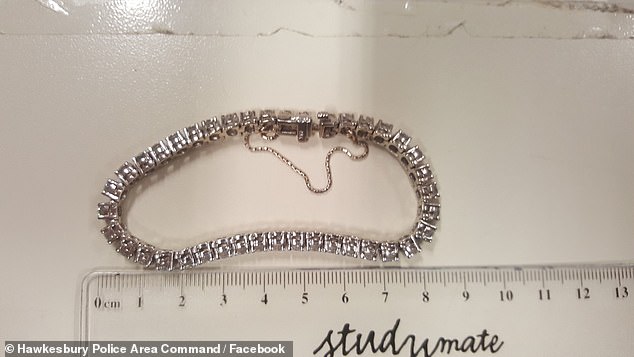 Similar comments were also made when the post was shared by NSW Police.

‘Would all the owners please form a queue at the front of the police station,’ one man quipped.

While many praised police on the lengths taken to track down its rightful owner, others speculated on whether the lost bracelet was linked to a crime.

‘Surely the police don’t think people are that stupid,  clearly a trap,’ one woman posted.