Hundreds of seats may be empty at Champions League final

Hundreds of seats could be empty for this Saturday’s Champions League final after over 2,000 Real Madrid fans returned their tickets owing to concerns over lack of accommodation in Kiev and travel problems.

Real have reissued the returned tickets to supporters who were included in the original ballot, however it is feared that hundreds will remain unsold.

Liverpool have broached the issue with UEFA in hope of using the returned tickets, but the governing body’s concerns over fan segregation means the situation has now hit an impasse.

Resale websites are offering tickets to Liverpool’s Champions League final for up to £15,000

The Reds sold out their allocation of 16,626 seats but now hundreds of tickets are available on resale websites.

‘This has been a debacle and it is down to the choices made by UEFA about the location of the final and the ticket prices.

‘If you are a Real Madrid fan being offered one of these returned tickets for €300 (£263) to €400 (£351), with no possibility now of flying to Kiev and hugely expensive accommodation — if there is any — then you can understand why they might say “No thanks”.’

UEFA have announced that this Saturday’s showpiece will be the last chosen before its new bidding system of allocating finals is introduced.

In the future, stadia must meet certain criteria, including ample accommodation and airport capacity, before it can host a final.

There are 29 charter flights heading from Liverpool to Kiev, however there are no more landing slots available even if Reds supporters are able to get their hands on tickets through resale websites. 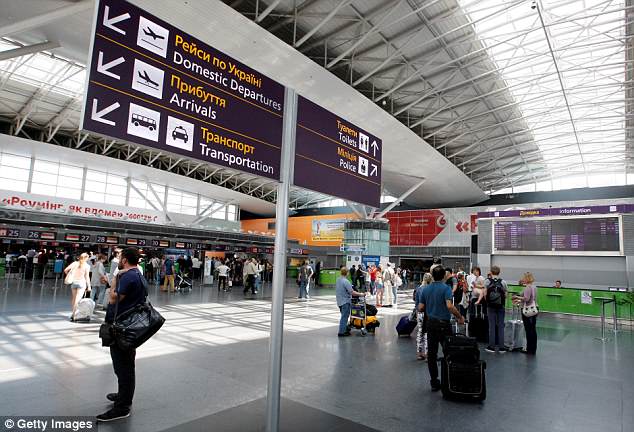 There are 29 charter flights from Liverpool to Kiev, but no more landing slots are available

Some fans have been forced into plotting a round-the-houses journey to get to the Ukrainian capital, including through neighbouring countries, some of which require separate visas, or flying into the coastal city of Odessa, 300 miles away from Kiev.

Others will undertake an arduous coach journey from Liverpool to Kiev, which will take five days there and back.

These are the decisions Liverpool fans must make if they are somehow able to purchase a ticket for the weekend. On website Ticketbis on Monday, the cheapest seat in Liverpool’s section, face value £140, was priced at £1,181.

‘The situation is ridiculous,’ Liverpool fan Neil Atkinson told the BBC. ‘People who don’t support either club will end up with tickets and look at it as an opportunity to make money.’

Liverpool warned supporters that ‘under no circumstances should tickets for the final be purchased from unofficial sources. The club is aware of instances of tickets being sold at extortionate prices.’