Hundreds of strangers turned out to pay their respects to a victim of the El Paso, Texas, mass shooting after a public appeal for strangers to attend her funeral.

The mourners braved 100-degree heat Friday to stand outside of the La Paz Faith Center to honor 63-year-old Margie Reckard. She was one of 22 people killed by a gunman who opened fire at a Walmart in the city earlier this month.

Antonio Basco invited the public to attend the funeral of his partner of more than two decades after revealing he had no close family left.

Jordan Billard flew in to Texas from Los Angeles on Friday for the service after hearing Reckard’s plea. And 21-year-old Natalie Sanchez of El Paso also came to the service and says she’s in awe of how her city is rallying around a stranger. Buzzfeed News reported that there were more than 700 people in attendance.

More than 700 people came to the funeral of 63-year-old Margie Reckard after her husband, Antonio Basco, pleaded to the public for folks to attend his wife’s service 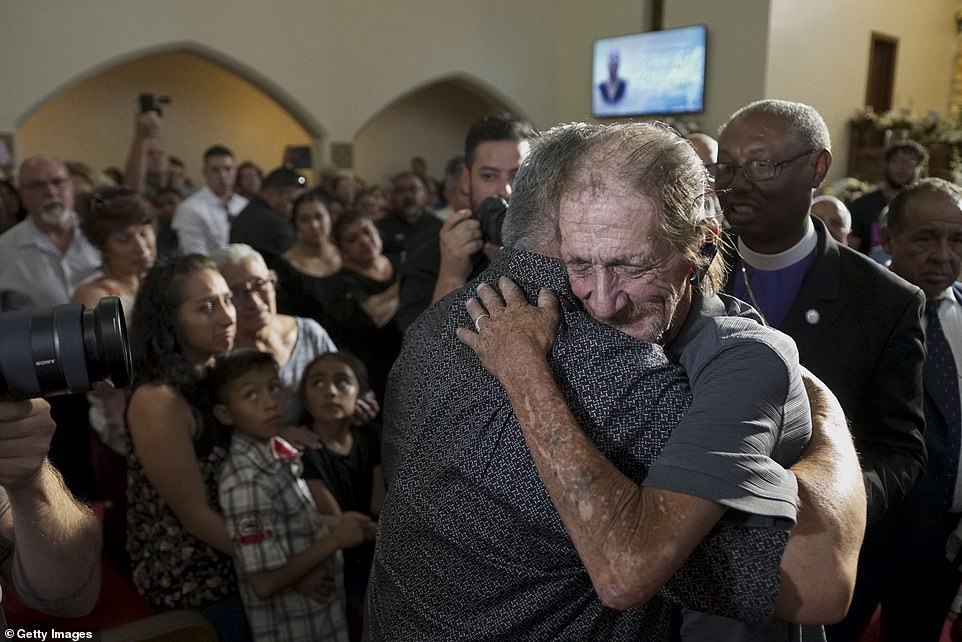 Support: Basco hugs a wellwisher during the funeral service. Basco says he has no family and is now all alone 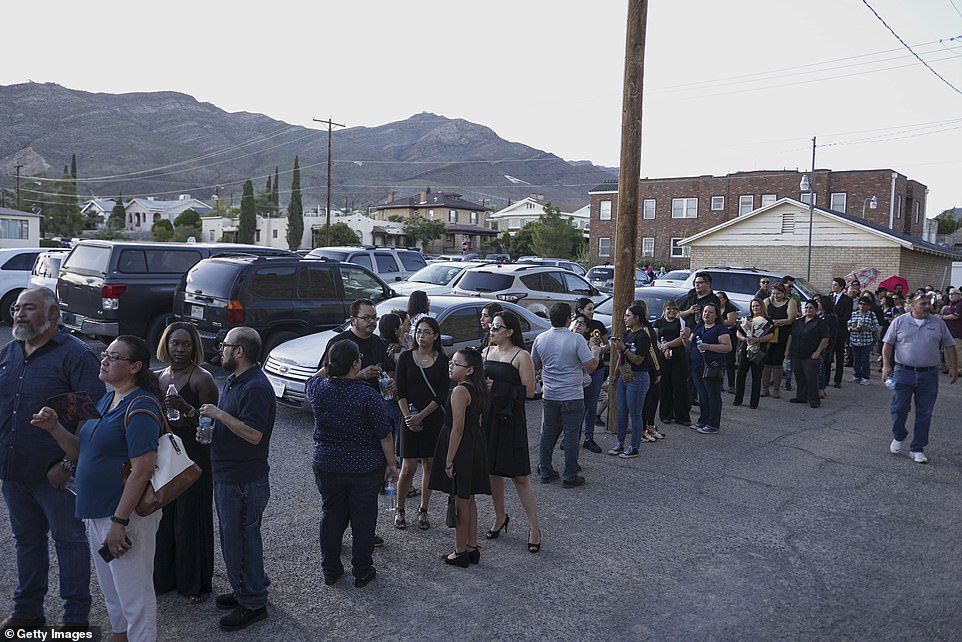 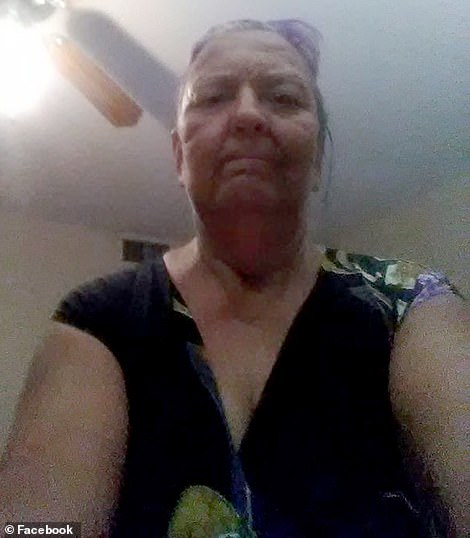 Reckard, 63, (pictured) was one of 22 people killed when a gunman opened fire at a Walmart in the Texas border town on August 3, leaving her husband of more than two decades alone

Folks clapped vigorously as Basco made his way down the center aisle.

Jose Delgado, owner of Carter’s Flowers, dropped off more than 70 floral arrangements with his wife for the service.

‘What happened is heartbreaking but seeing everyone come together is beautiful,’ he said.

While well-wishers waited, Basco arrived to people shouting blessings in English and Spanish. Before entering the funeral home, someone gave him a gift that appeared to be an El Paso t-shirt.

‘I love y’all, man,’ Basco said, before breaking down.

As the line swelled, Basco came back out to thank attendees personally for coming. People crowded around to hug and touch him. Basco appeared overwhelmed that strangers were now running toward him to show love and offer condolences.

Moments later, mariachis walked through the crowd singing ‘Amor Eterno,’ the 1984 ballad by the late Juan Gabriel, that has become an anthem for El Paso following the shooting. Some attendees sang along. Others sobbed and got out of line. 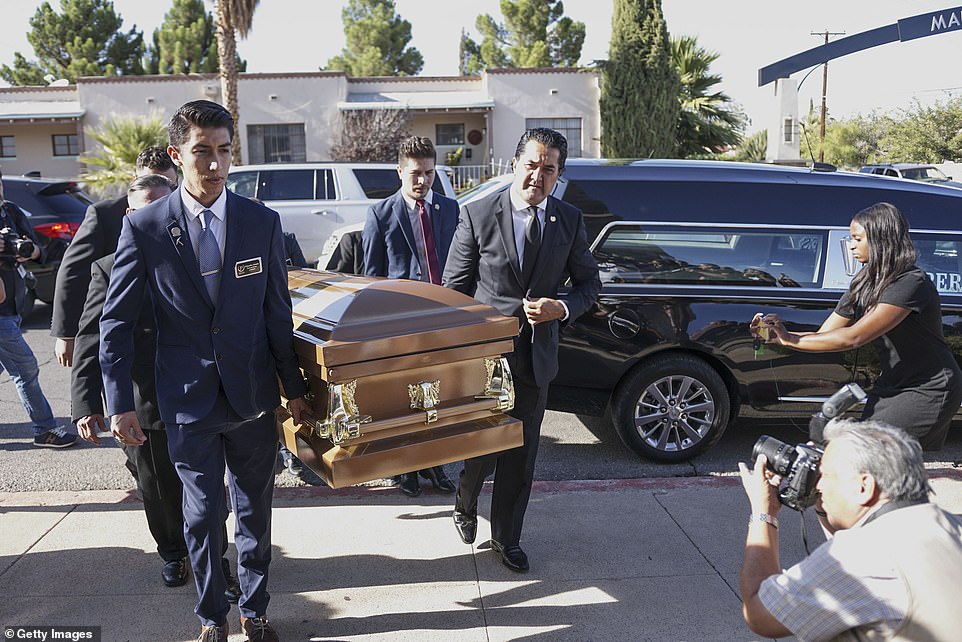 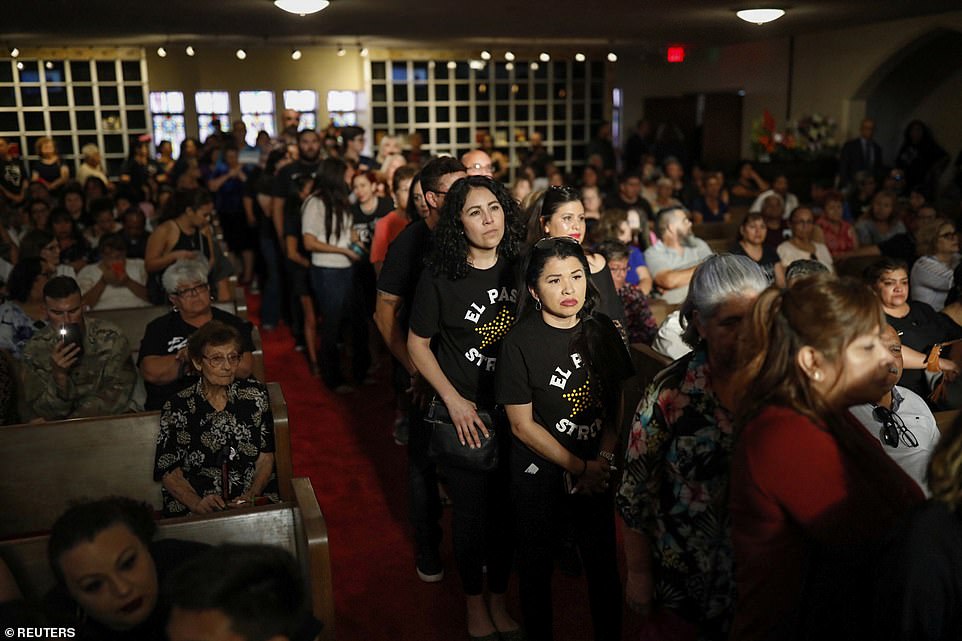 Heartbreaking: Mourners wait in line to pay their respect and offer words of support to Basco 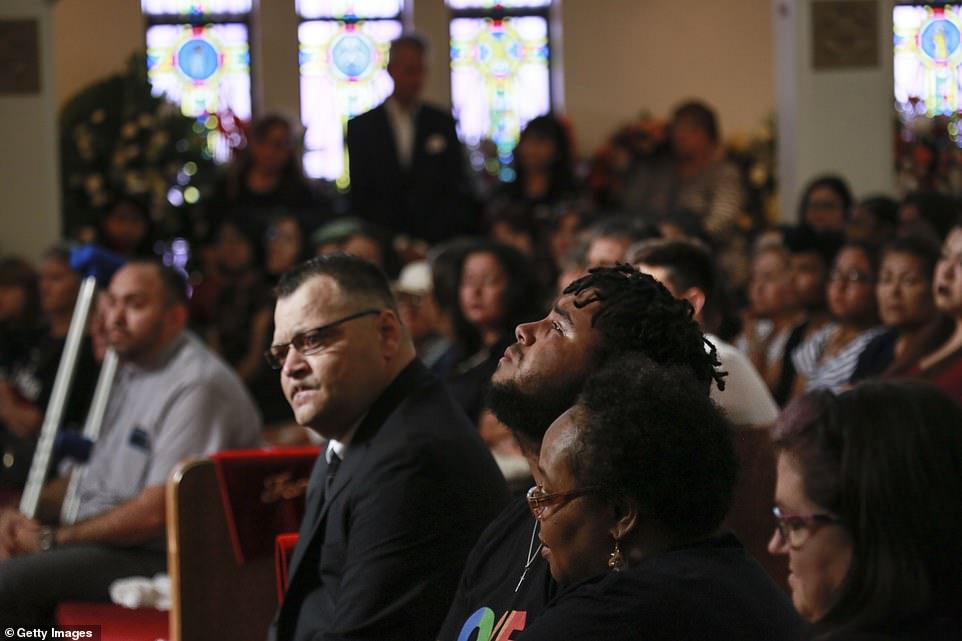 Reckard had children from a previous marriage who travelled from out of town to the funeral. Her grandson, Tyler Reckard, weeps in the front of the service 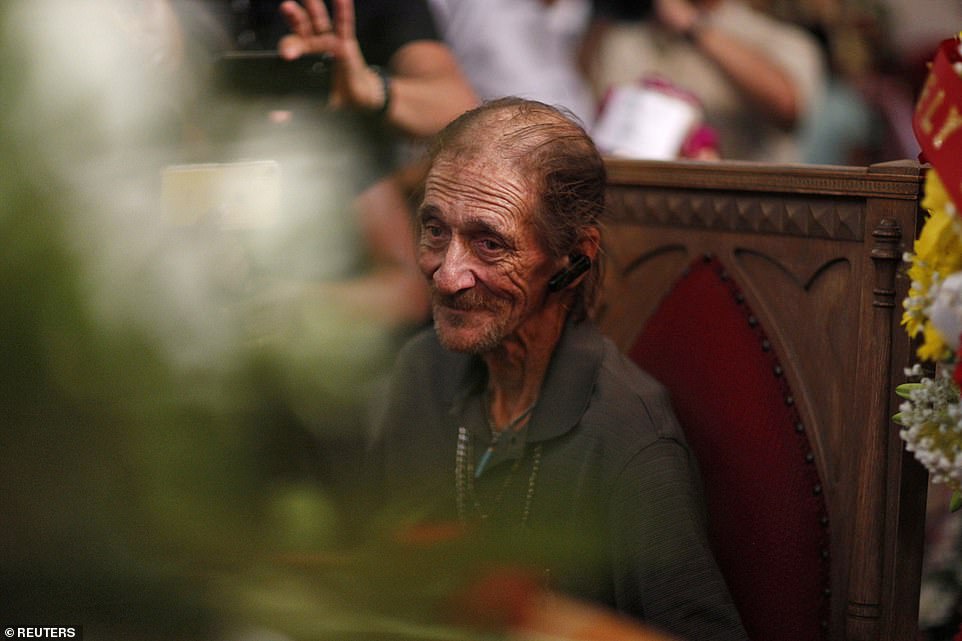 ‘We’re your family,’ another person is said to have told him while he greeted.

‘She made me the happiest man in the world and the luckiest. There’s nobody luckier than me in this whole world,’ Basco told CNN in an interview that aired Friday.

‘I’m looking at the front door just waiting for her to walk in. I’ve even tried to call her on the phone,’ Basco said.

Not having any other family, Basco told the Perches Funeral Home, which arranged his wife’s burial, that he wanted to send out an open invitation to the whole town to attend the service. 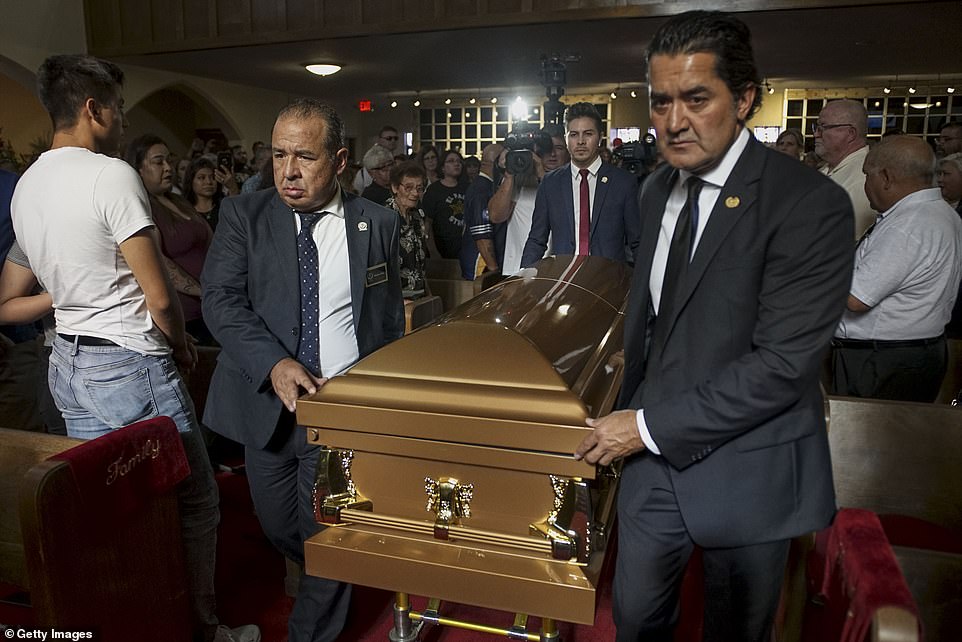 Pallbears carry Reckard’s casket into the funeral home. Reckard, 63, was one of 22 people killed when a gunman opened fire at a Walmart in the Texas border town on August 3, leaving her husband of more than two decades, Antonio Basco, all alone 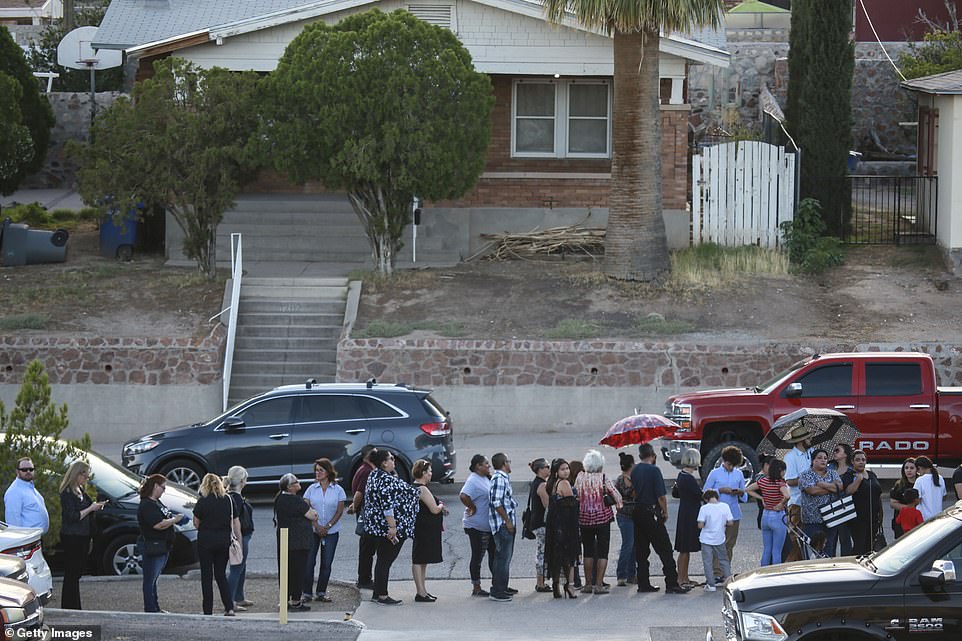 As the line swelled, Basco came back out to thank attendees personally for coming. People crowded around to hug and touch him 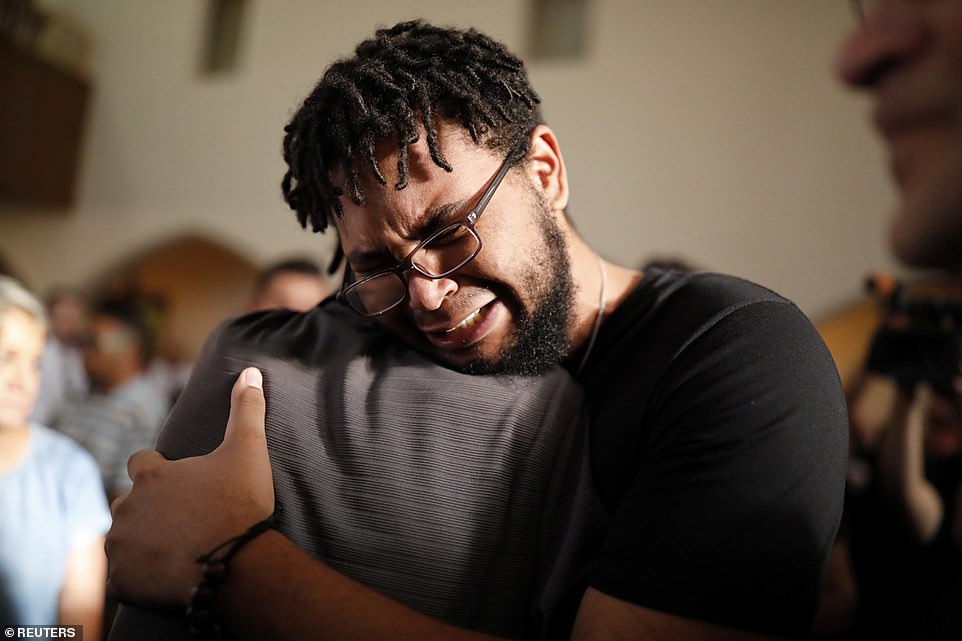 Tyler hugs Basco during the visitation service for Marie Reckard

Harrison Johnson, the funeral home director, told National Public Radio that since posting the invitation on Facebook, the site had been visited more than 11,000 times.

He said his funeral home could only accommodate 250 people, which prompted the service to be moved to the new location.

Johnson headed the service. Funeral home staff urged attendees to be patient as people began rotating in and out of the service amid scorching heat.

Reckard had children from a previous marriage who travelled from out of town to the funeral. But Johnson said that for Basco, Reckard was ‘his life, his soul mate, his best friend.’

‘Probably some people have felt like Mr. Tony in a time of death — they felt like they were alone and nobody was around,’ Johnson said.

A GoFundMe site has also raised more than $25,000 in online donations to help support Basco, who runs a mobile car wash business in the town on the US-Mexico border.

‘After I found out about his story, there are so many people in need of help and comfort but his story got to me the most, after he told me he was all alone,’ said the site’s organizer Carlos Armendariz, on the fundraising page.

The mass killing was carried out by Patrick Crusius, a 21-year-old white man who drove more than nine hours to El Paso to carry out the attack. After his arrest, he told police that he was targeting ‘Mexicans.’

Prior to the shooting, Crusius published a white supremacist manifesto online which expressed fears of a ‘Hispanic invasion’ of Texas. 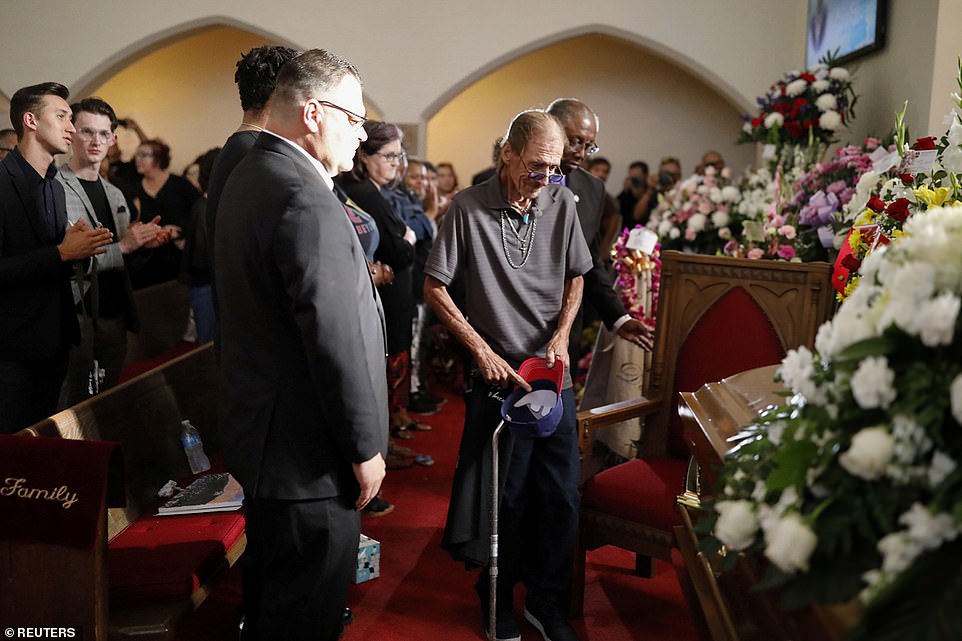 Harrison Johnson, the funeral home director, told National Public Radio that since posting the invitation on Facebook, the site had been visited more than 11,000 times 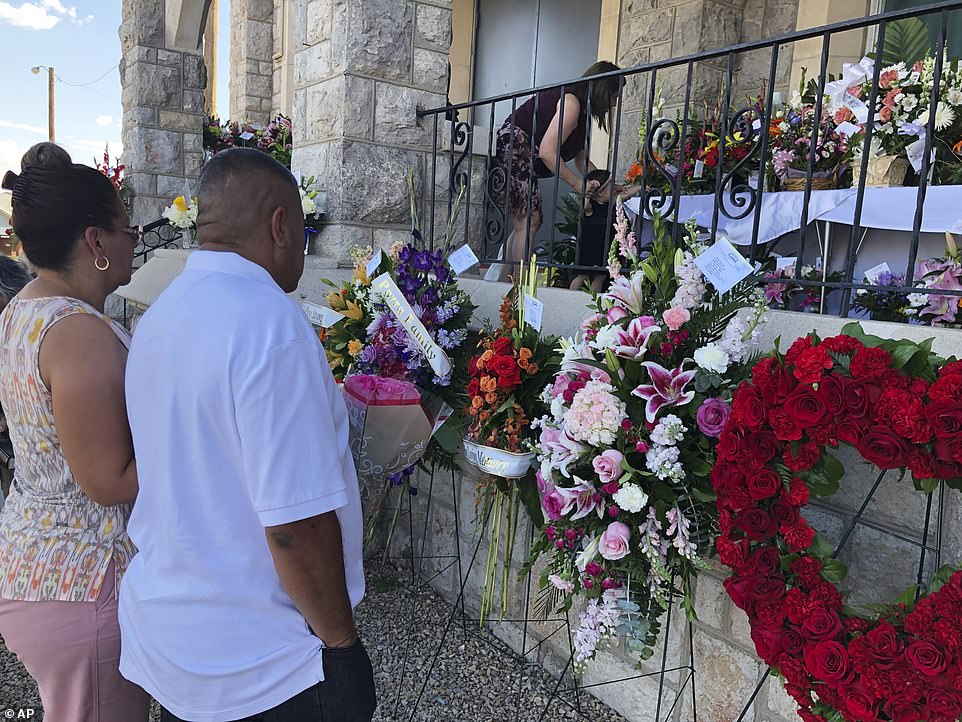 Visitors bring flowers to post for Reckard and her visitation service 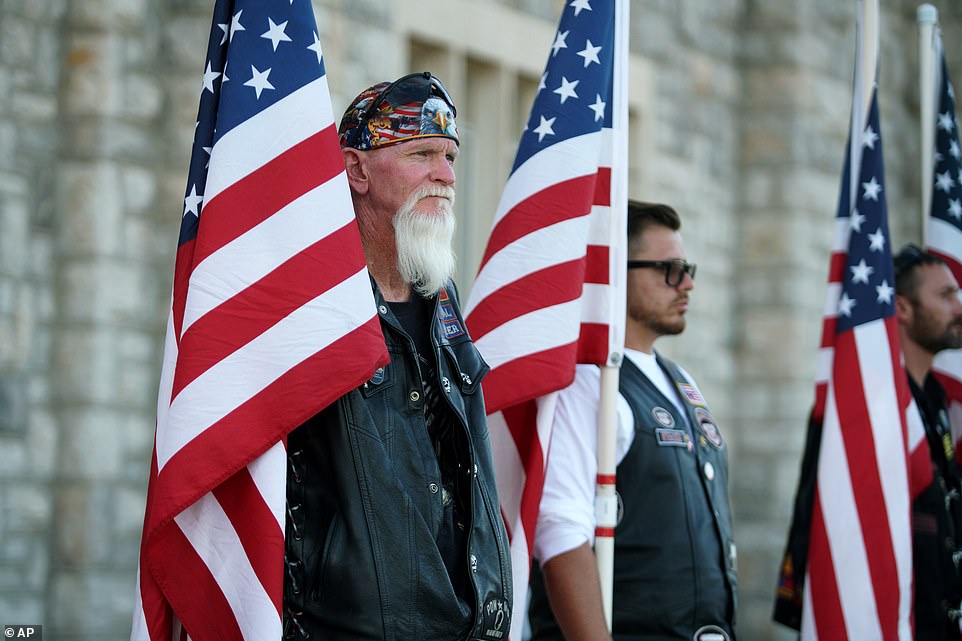 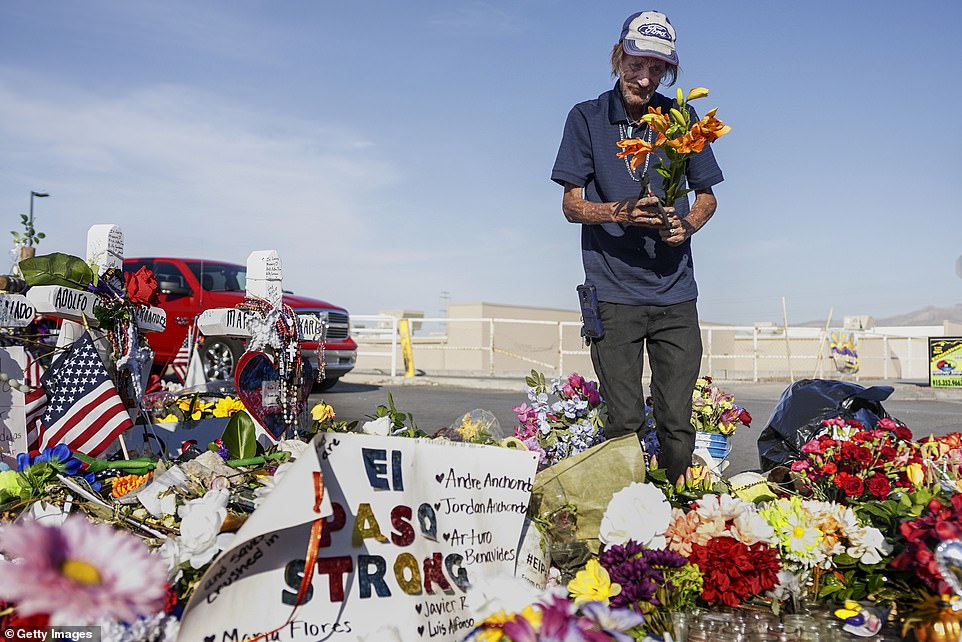 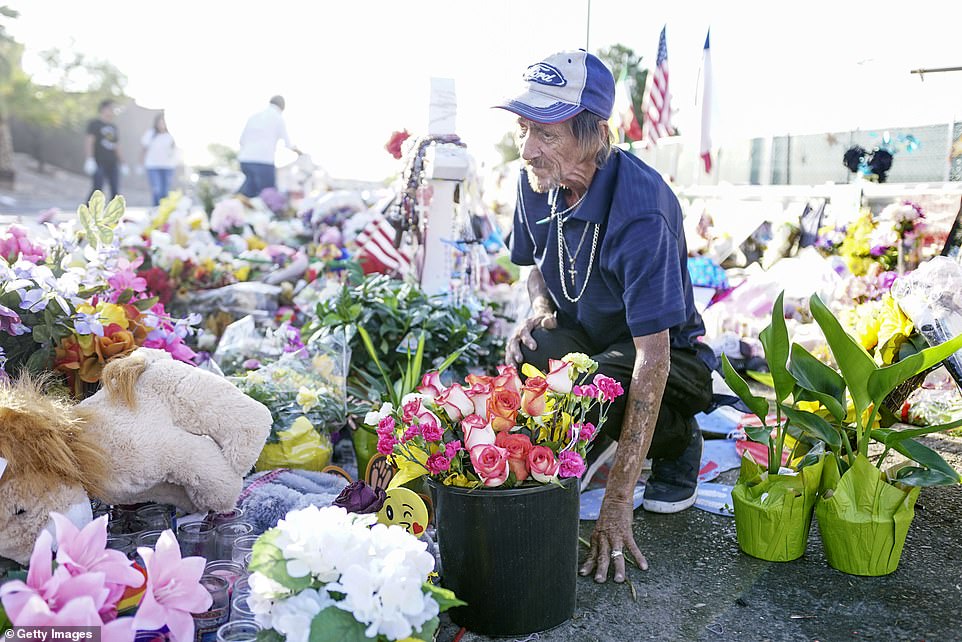