Hundreds of strangers attended the funerals of two war heroes with no living family members in poignant scenes today.

RAF veteran Harold Tracey and former Welsh Guardsman Charles Saunders were both honoured at ceremonies this afternoon in front of crowds of Good Samaritans.

Appeals were launched for strangers to attend both funerals amid concerns that nobody would attend either service.

However more than 250 arrived at Emstrey Crematorium in Shrewsbury, Shropshire to pay their respects to Mr Tracey, 93, who died in May following a distinguished military career.

Meanwhile a similarly large crowd at St Andrews Church in Broadstairs, Kent gave a hero’s send off to Mr Saunders, who died in his sleep at the age of 101 on July 7. 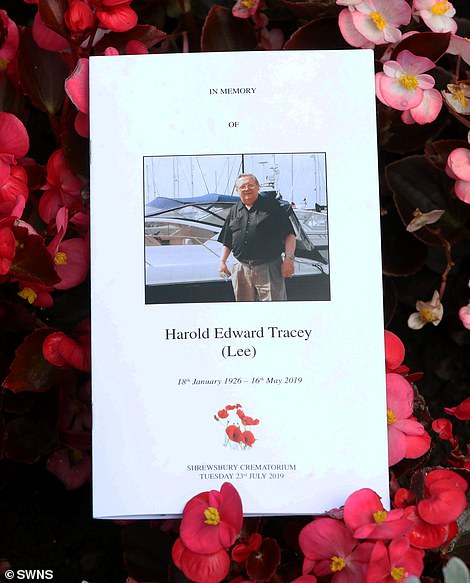 Harold ‘Lee’ Tracey, 93, died from a stroke in May after a distinguished career as a sergeant in military intelligence – but there were fears nobody would show up to his funeral 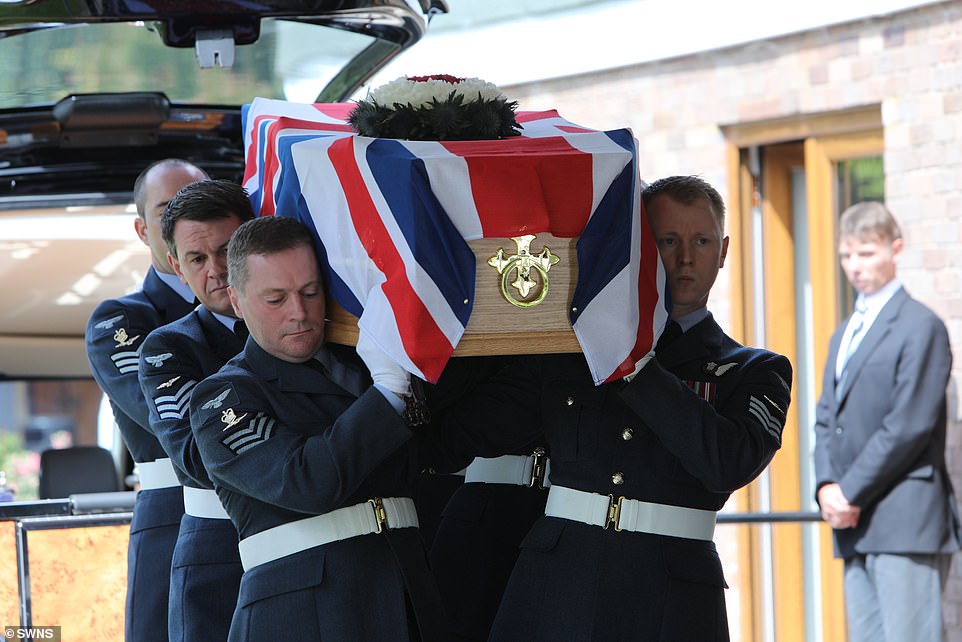 More than 250 arrived at Emstrey Crematorium in Shrewsbury to pay their respects to Mr Tracey, 93, who died in May following a distinguished military career 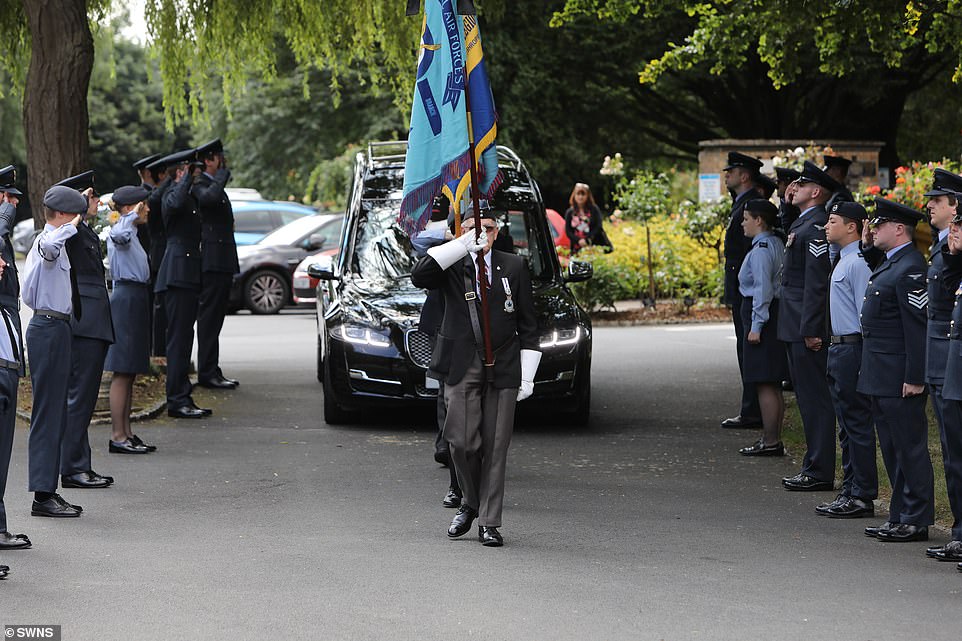 More than 30 uniformed officers lined the entrance to Emstrey Crematorium, Shrewsbury, Shrops., as troops from RAF Shawbury acted as pallbearers 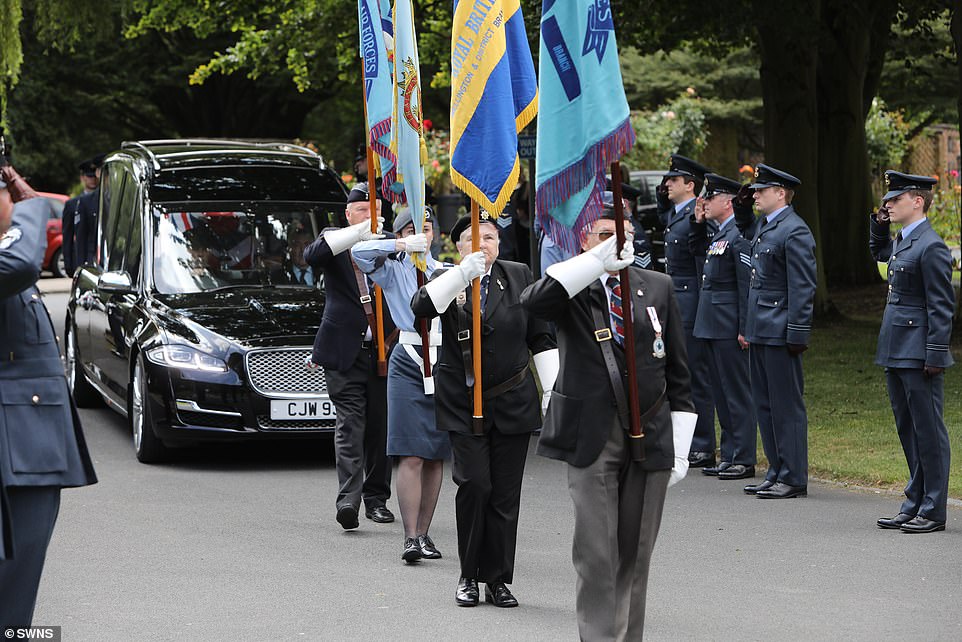 During the half-hour service in Shrewsbury, led by Reverend Wing Commander Alastair Bissell, visitors sang hymns and listened to readings in memory of Mr Tracey

The war veteran spent four years as a prisoner of war during the Second World War after he was captured during in France in 1940.

Following his death, an appeal for attendees to his funeral was made online by Philip Baker, who struck up a friendship with the veteran while visiting his care home.

His coffin was draped in the Union Flag, as well as a Royal British Legion cap, lilies and a wreath made of poppies as it was carried into the church by pallbearers.

A similar appeal was organised by the RAF Association following the death of Mr Tracey, with former service personnel coming out in force to pay their respects. 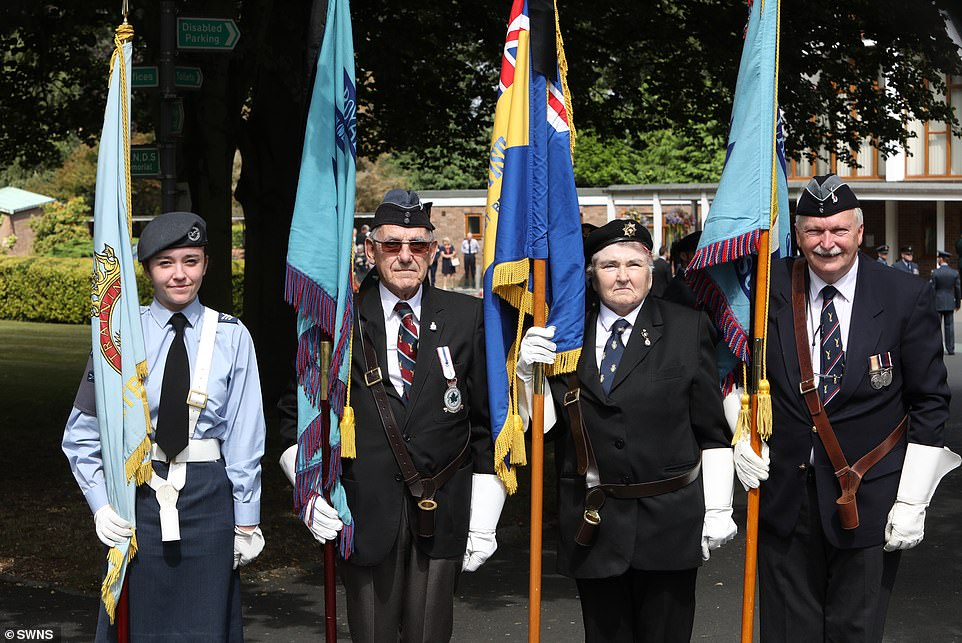 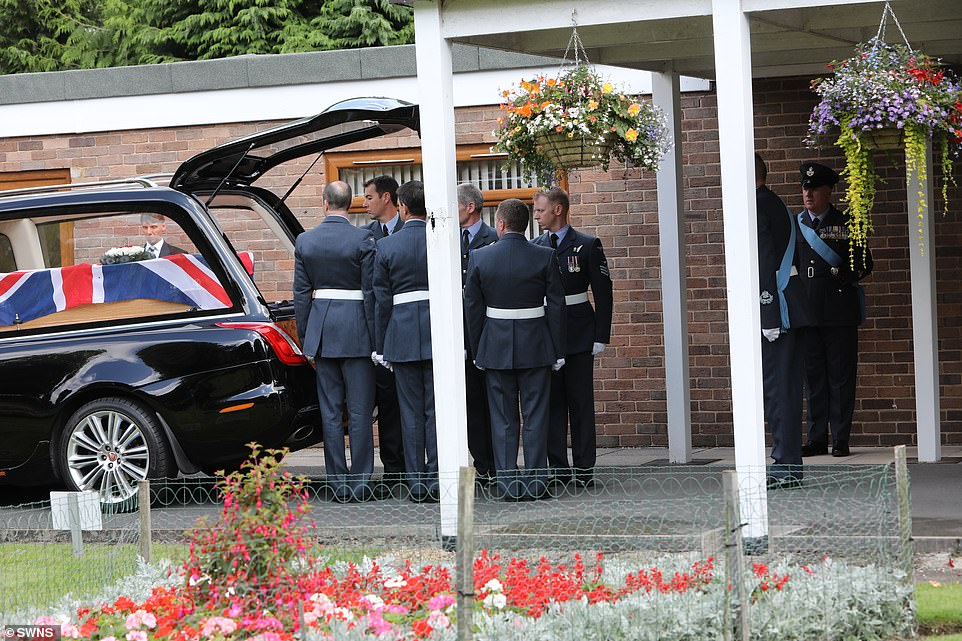 An appeal was organised by the RAF Association following the death of Mr Tracey, with former service personnel coming out in force to pay their respects 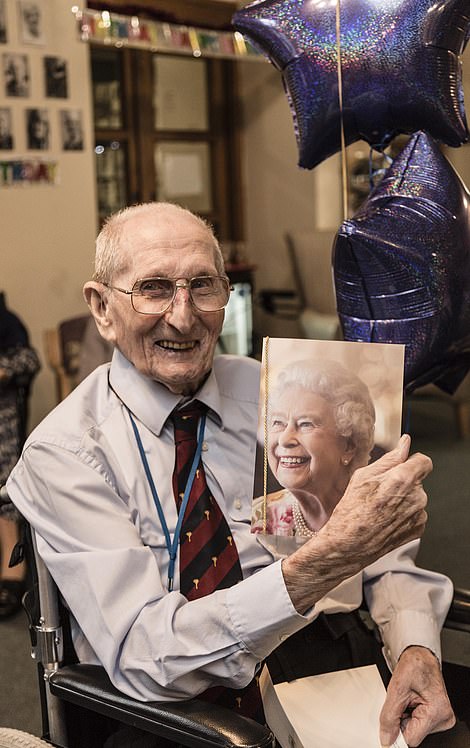 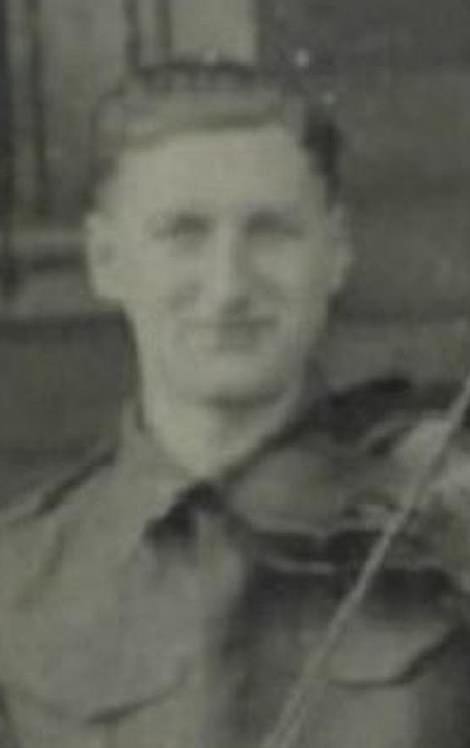 Former Welsh Guardsman Charles Saunders (left) was honoured at a service in front of crowds of Good Samaritans (shown right, during his time as a PoW during the Second World War) 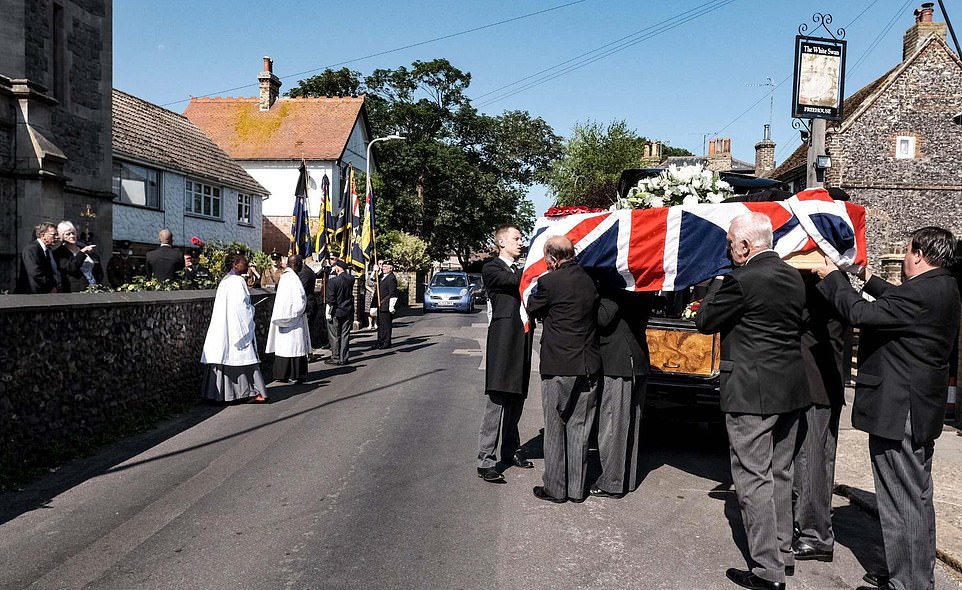 Charles Saunders’ coffin was draped in the Union Flag, as well as a Royal British Legion cap, lilies and a wreath made of poppies as it was carried into the church by pallbearers 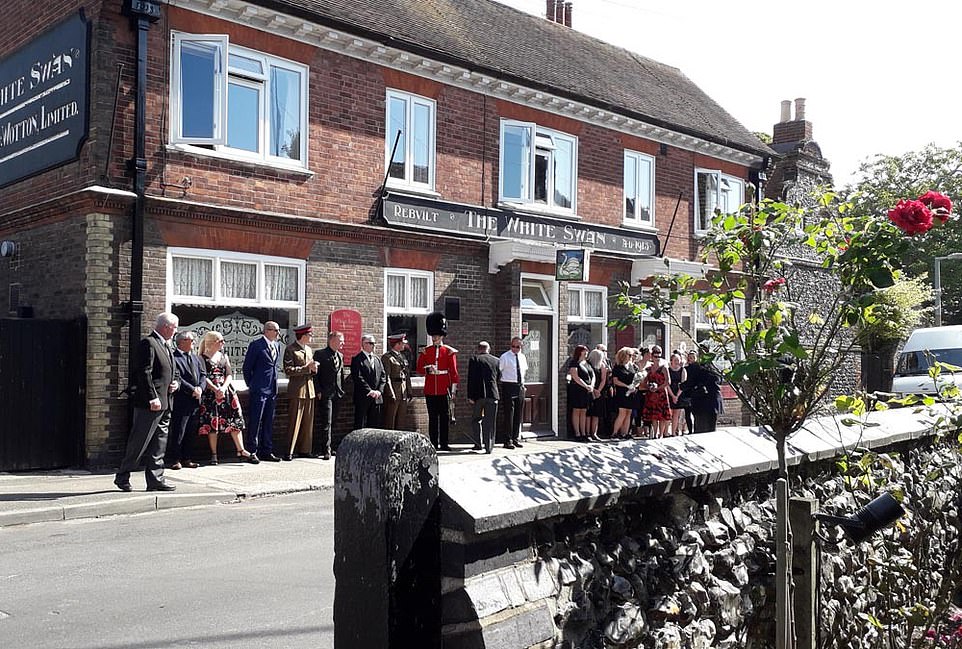 He said: ‘Lee Tracey was a true hero who served his country for many years. He was 93 years old and sadly died, as far as I know, with no known next of kin.

‘The RAF Association is assisting with this funeral which I have organised as his friend.’

The service also included a reading of a poem by Mary Elizabeth Frye which contains the lines: ‘Do not stand at my grave and weep; I am not there. I did not sleep.’

The service ended with The Last Post played by RAF buglers. 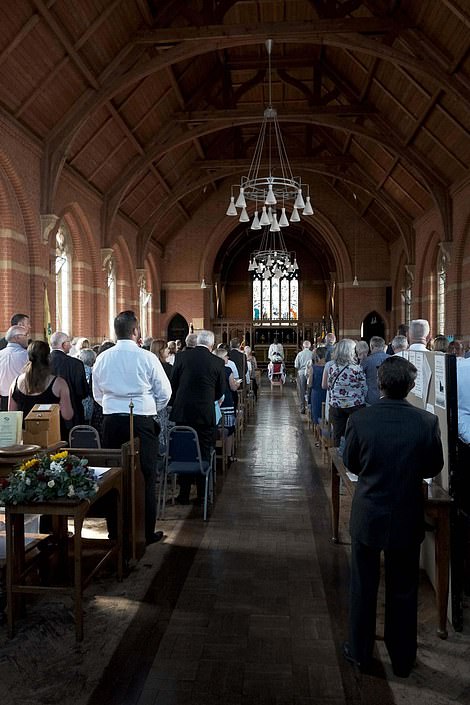 He worked for Kodak and joined the Air Training Corps, then was enlisted to the RAF in 1943 and was made a Sergeant in RAF intelligence.

Tours followed to Egypt, India and Iraq, where he worked on cryptography and surveillance before leaving the RAF in 1947.

He stayed in the intelligence sector, working for the security services until 1970 and launching a market-leading surveillance equipment company.

Mr Nicholson said Lee’s passports had stamps from a huge number of nations when he found them following Lee’s death.

Lee met singer and actress Maria Wagg while at work, and the two fell in love and married in 1961.

They had a long and happy life together, moving to settle in Oswestry in 2002.

Meanwhile Birmingham-born Charles Saunders was just 21 when he enlisted into the Welsh Guards.

He served from December 1939 and was part of the 2nd Battalion in Boulogne in May 1940 as German forces invaded France.

The battalion was sent to evacuate the British headquarters staff in the port town. But when Charles and his comrades arrived they found the staff had already left.

They established a temporary headquarters and were told they would be taken by boat back to England as soon as it could be arranged.

At the port of Boulogne which was under heavy German bombing, troops were boarding a ship to head back to England when a cargo train in the harbour was hit by a bomb.

The ship set off leaving 1,200 men stranded in the port. He found himself trying to evade the advancing German troops in Boulogne. 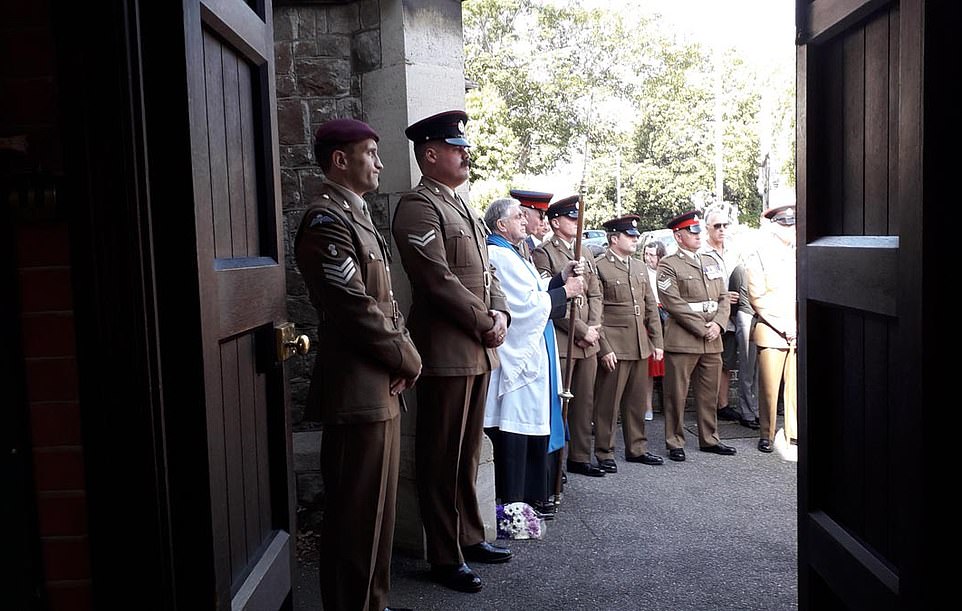 A large crowd at St Andrews Church in Broadstairs, Kent gave a hero’s send off to Mr Saunders, who died in his sleep at the age of 101 on July 7 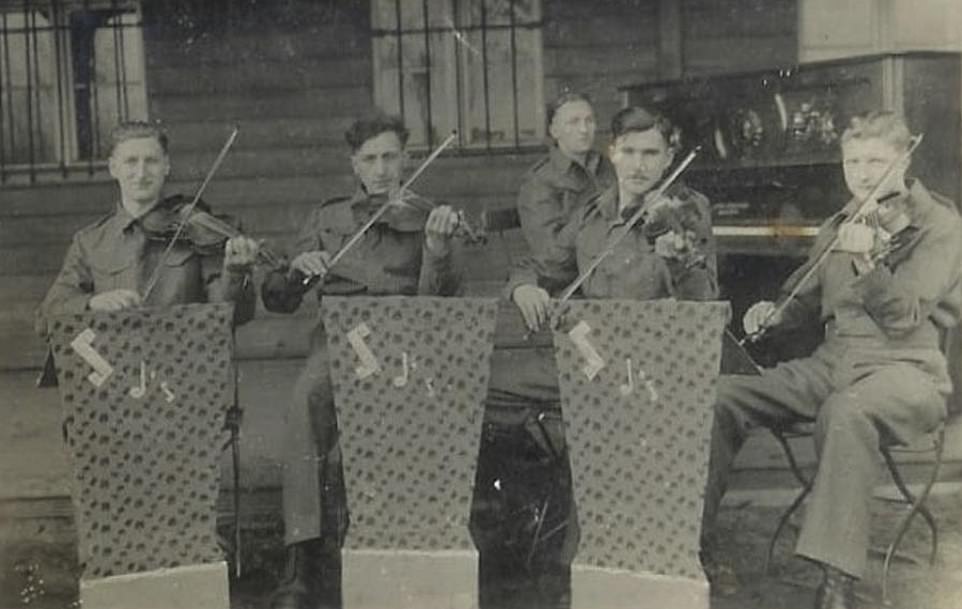 Charles Saunders, far left, kept morale up during his time as a PoW by playing his beloved violin along with his bandmates

Speaking at his 100th birthday celebrations in December 2017, he said: ‘We were waiting to board a ship when an incendiary bomb blew up a nearby cargo train.

‘The skipper cast off and we were left stranded on the coast. We had to drive off the Germans and hold our position for nearly 48 hours.

‘It was hard fighting and many of us didn’t make it out from there. Myself and three others escaped and found an abandoned house. We hid there for about 10 days, living off some sugar and wine that we found.

‘We lit a fire and some French locals turned up to tell us that we should put it out because people could see the smoke.

‘They gave us some civilian clothes and took us away to hide in an old lady’s house. We were there for several weeks. Most of the time we would hide inside but sometimes we’d walk on the beach, looking for a boat to sail back to England.

‘One day, I looked out of the window and saw a German car pulling up. The woman’s niece had dobbed us in to get some money. We tried to run out the back but soldiers were waiting so we went and hid in the roof for about two hours before they found us.’ 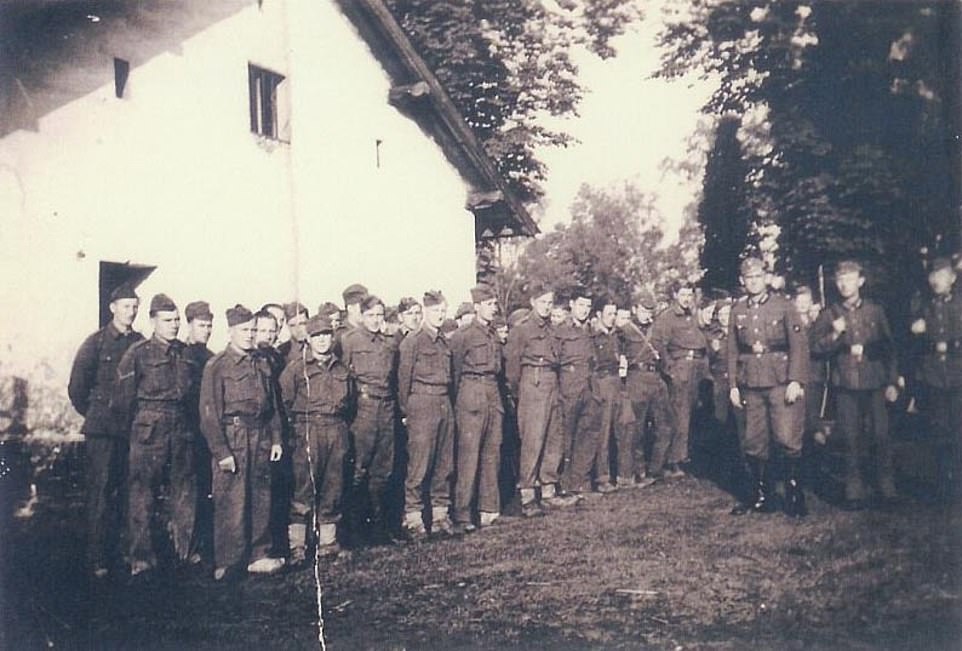 OPS Charles, far left, with comrades outside a temporary billet in the Buchelust area, 1941. Charles and his friends were sent to one of the major POW camps in Poland, where he was forced to do labour until 1945

Charles and his friends were sent to one of the major POW camps in Poland, where he was forced to do labour until 1945.

Life in the camps was brutal, but Charles, a keen violinist since the age of five, tried to keep up morale by forming a band to keep the other prisoners entertained.

After the war was over, Charles struggled to set up an orchestra in Birmingham, where many of his old friends had never come home.

By 1952, he and his wife had decided to move down to Broadstairs in Kent, where he lived until his death.

The French family who had hidden Charles and his comrades got in touch with him via the War Office and they remained in contact for many years.

He would visit them each year and even put on a concert for the locals, most of whom had helped to feed him during his stay.

Charles was living at the Royal British Legion’s Maurice House care home in Broadstairs when he passed away on July 7.