Hundreds of quarantine-fatigued New Yorkers ignored lockdown orders not to drink outside of bars and restaurants in the city Monday.

Mayor Bill de Blasio has threatened to dispatch the NYPD to crackdown on the flagrant defiance.

Residents in the Big Apple who’ve grown tired of largely isolating inside their homes amid the coronavirus pandemic congregated at a host of bars in the Upper East Side, the East and West Villages, and in Greenpoint, Brooklyn on Monday.

A man waits for a to-go drink outside of a East Village Social in East Village, New York City, on Monday 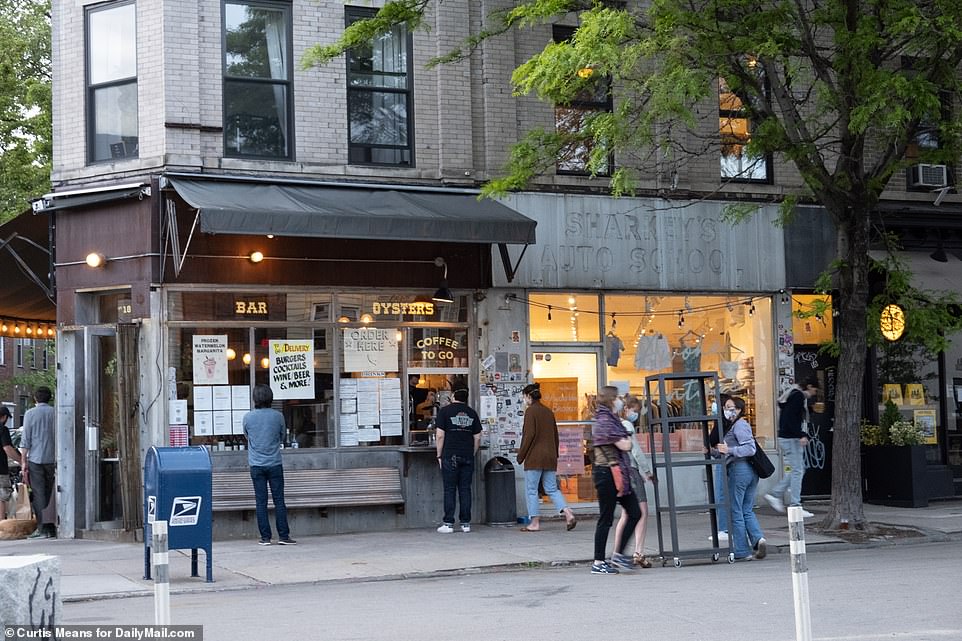 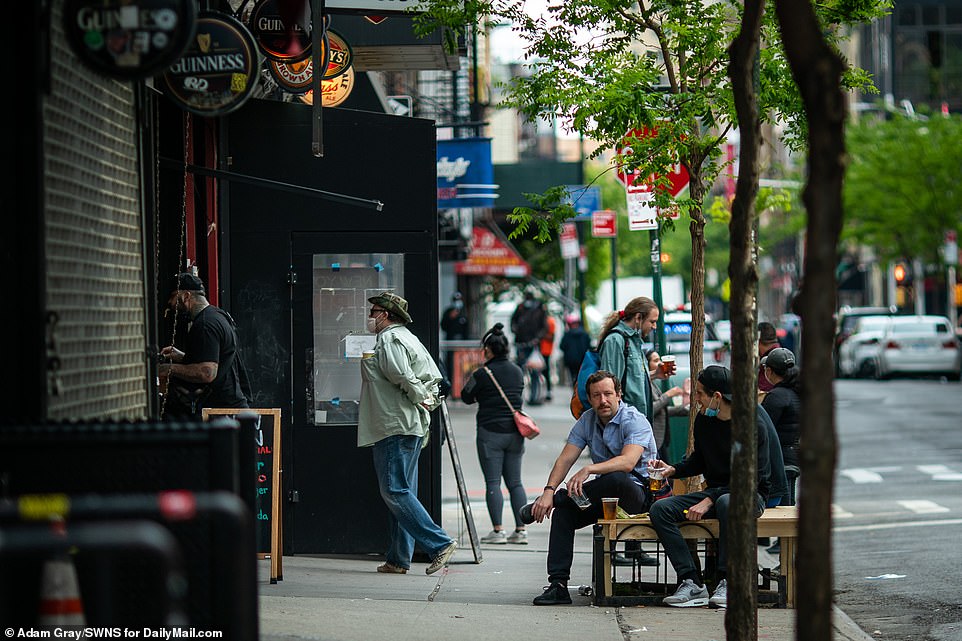 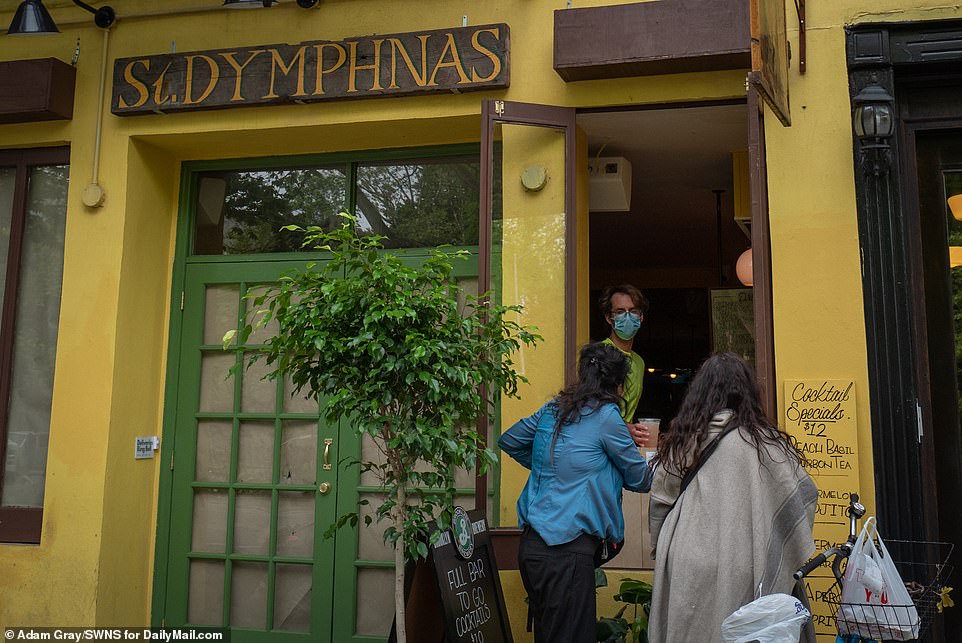 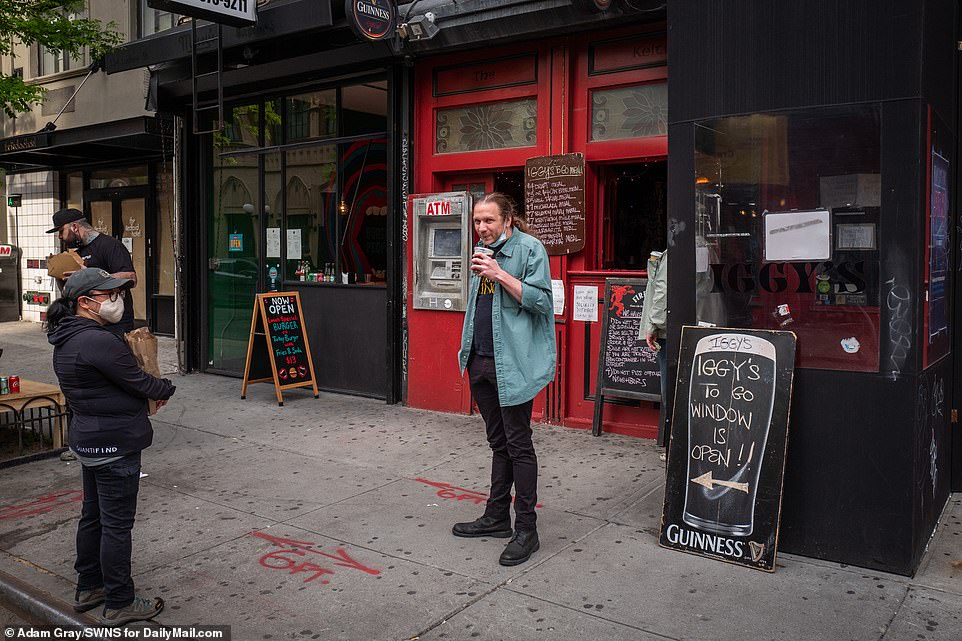 Dalvani: ‘I know everyone’s been quarantining at home and social distancing and working at home, the kids have online schools and we’ve all been doing our part and everyone’s been safe so we know it’s ok to meet with them because we know they’ve also been taking care’ 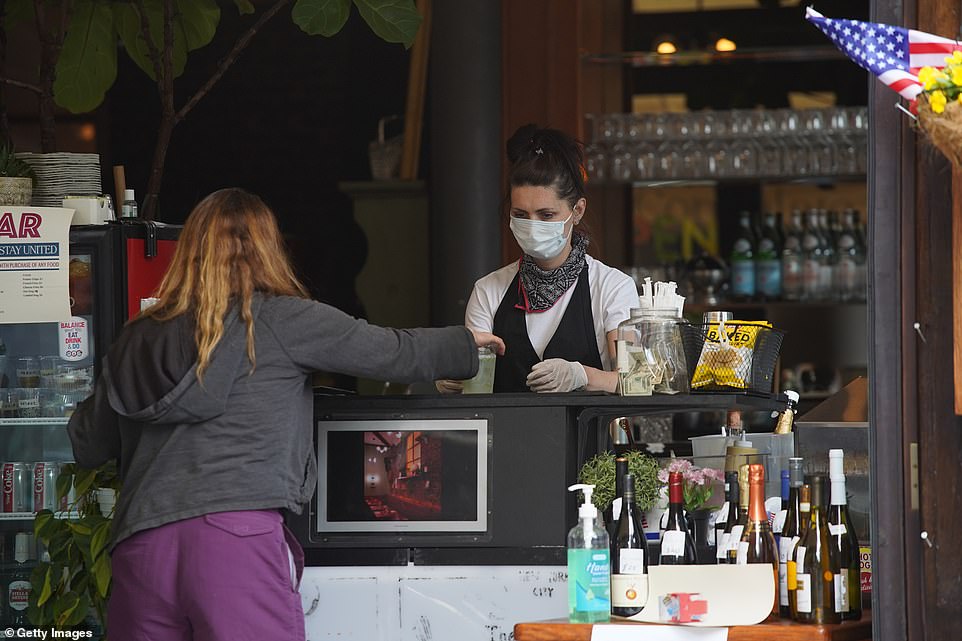 Pictured: A bartender serves drinks to a customer during the coronavirus pandemic on Monday in New York City

The crowds were bigger outside bars on the weekend. On Saturday, Connor Wilson, a customer at the Green Kitchen on the Upper East Side, told NY1 it reminded him of Mardi Gras.

‘It feels like I’m in New Orleans right now! Everybody’s out having a great time! Wear your mask and have a drink!’ he said.

Several bars had music blasting as people loitered on sidewalks with drinks in their hands.

Sherouna Davlani and her husband traveled to Eli’s on East 79th Street and 3rd Avenue to meet a group of friends.

‘This is the first time we’re seeing them since the first week of March, so almost three months,’ said Dalvani.

She explained that she felt safe to hang out with friends who have also been following stay-at-home orders for the past several weeks.

‘I know everyone’s been quarantining at home and social distancing and working at home, the kids have online schools and we’ve all been doing our part and everyone’s been safe so we know it’s ok to meet with them because we know they’ve also been taking care,’ she said.

The pandemic has temporarily shuttered several bars and eateries in New York, but they’ve been allowed to serve alcoholic drinks and beverages.

The city’s lockdown orders have thrown the jobs of more than 150,000 people working in restaurants and bars into jeopardy.

And with the government’s $349 billion Paycheck Protection Program (PPP) running low, the motivation for owners of bars and eateries to reopen their businesses or expand their services has become more pressing than ever.

Some revelers who decided to visit local bars attempted to be somewhat cautious while out and about.

Daria Galtina was having a drink with her sister, but stayed the suggested six feet away.

‘You never know. Maybe they live together or something,’ she said.

‘Most of the people are trying to stay apart, which is great but obviously sometimes there are rule breakers which is not great. It’s kind of understandable, but it’s not great.’ 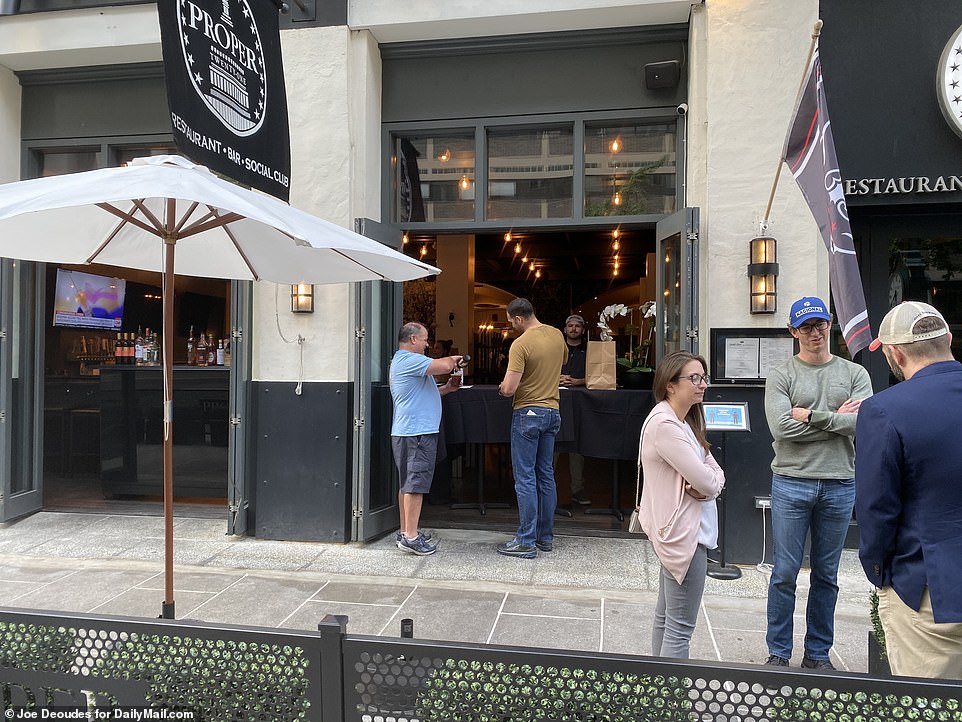 People buy a drink-to-go at the Proper, which is one block away from The White House, in Washington D.C. 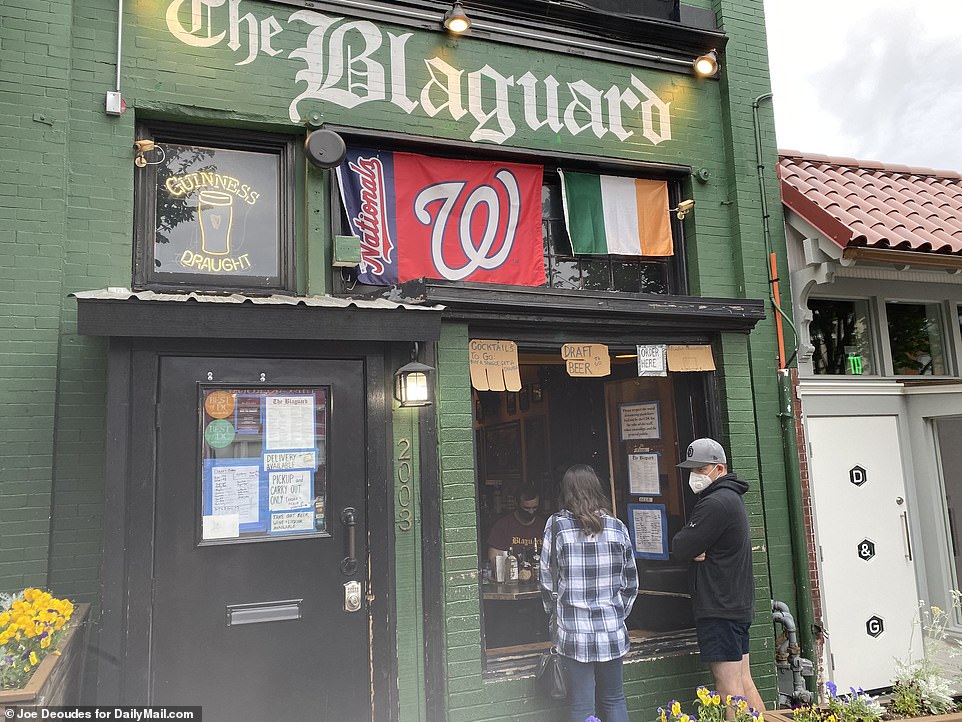 People buy a drink at The Blaguard in Washington D.C. as several bars now offer takeout drinks during the coronavirus pandemic 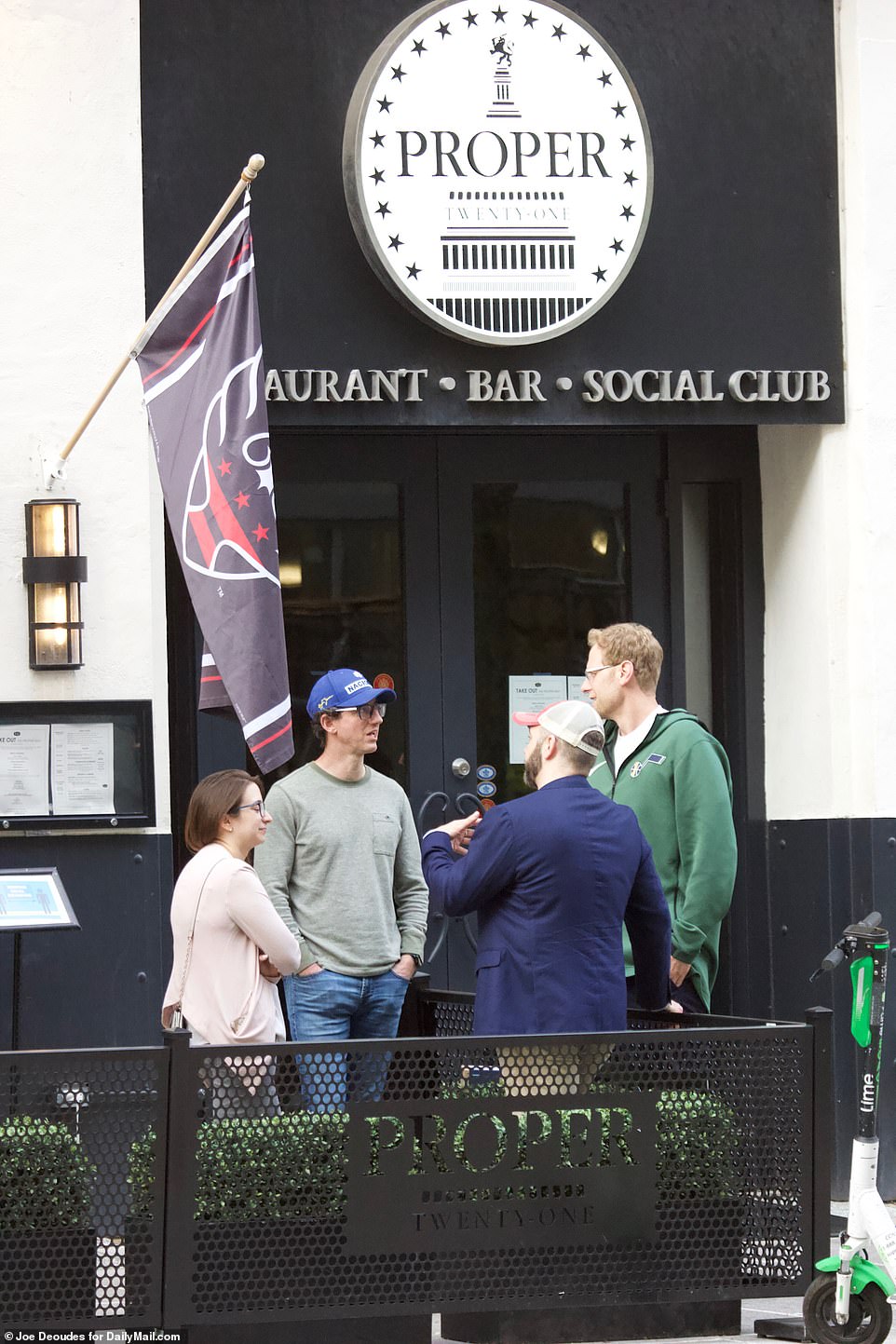 A manager at the restaurant told Eater on Sunday night that they’re asking customers to be mindful of their neighbors and not to loiter, however, ‘once people aren’t on our property, they technically are not within our jurisdiction,’ he said.

The city has been closing down streets to allow for more outdoor space and to make social distancing easier. Officials have also touted plans for outdoor dining options for restaurants and bars over the summer, however discussions are still in the early stages.

While the uncertainty persists, some restaurants have reportedly been running underground dining operations, Air Mail reported.

It’s claimed that as many as 20 to 40 people have been frequenting ‘basement’ venues all over Manhattan and Brooklyn since the lockdown orders were issued in mid-March.

Lower East Side nightclub Omar’s La Boite has also reportedly held parties during the shutdown, though the claims have been vehemently denied by its owners, Eater reported.

‘They just switch nights every week,’ an insider claimed. ‘If the police come, everyone just says they’re there to pick up their to-go order.’

Most of the dwellers seen bar-hopping across the weekend were young, and many opted not to wear masks.

After photo surfaced of New Yorkers relaxing at bars this weekend, Mayor de Blasio threatened to ramp up authority presence.

‘I’m not comfortable at all with people congregating outside bars,’ de Blasio said during a Sunday press briefing of the lively scenes. 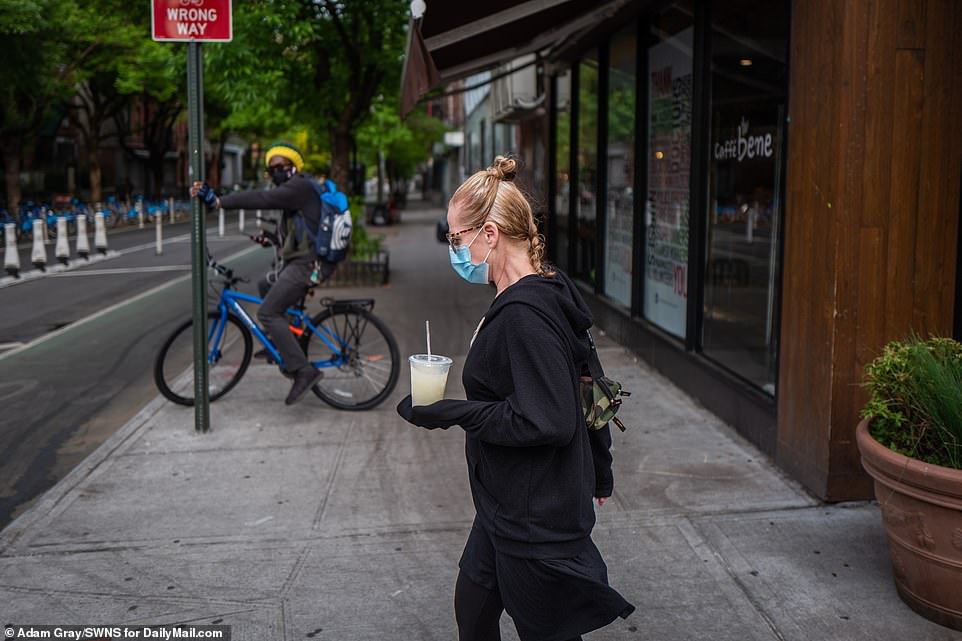 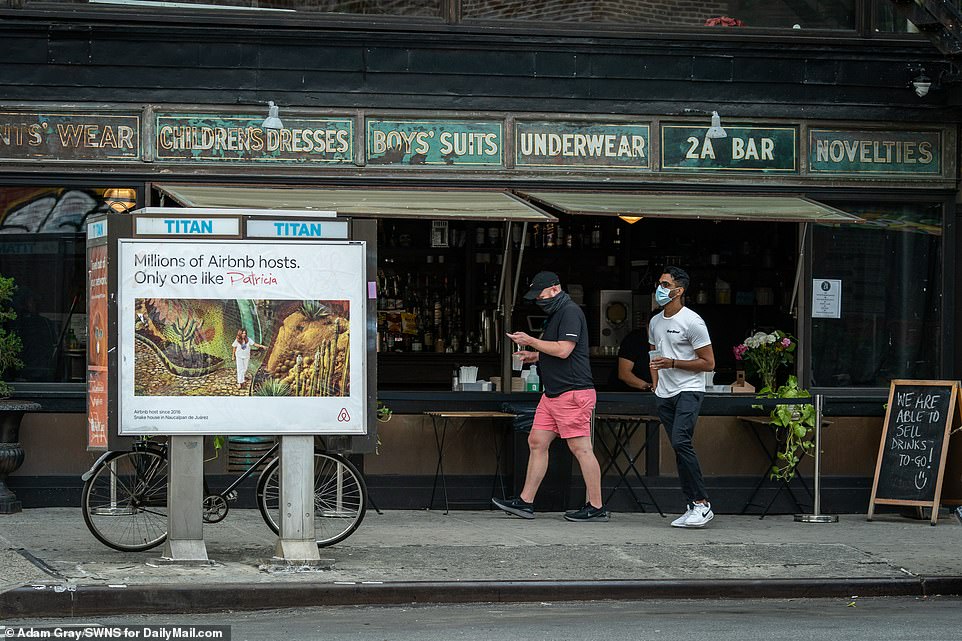 ‘If we have to shut places down, we will if they’re starting to violate these rules,’ de Blasio said of closing places that still serve beverages during the pandemic after residents flocked to bars this weekend 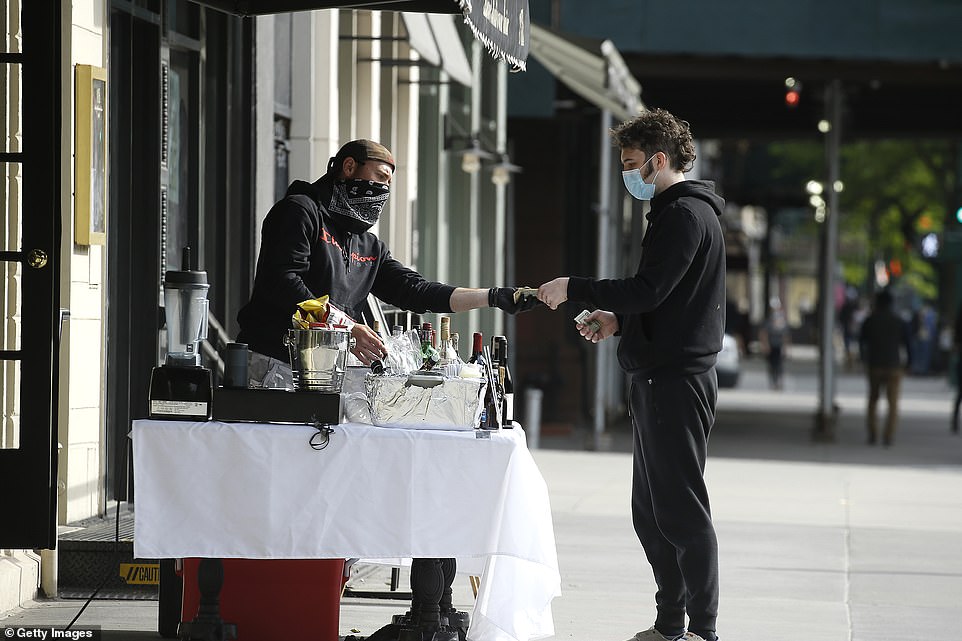 Pictured: A man wearing a protective mask purchases a drink at an outdoor bar as some restrictions begin to lift during the coronavirus pandemic

‘That violates what we’re saying about social distancing. That puts lives in danger.’

De Blasio singled out the Upper East Side as having a ‘particular problem’ across the mid-May weekend. At least one UES restaurant served customers on premises, a blatant violation of March’s statewide emergency order, according to NBC New York.

An army of officers from the New York Sheriff’s Department lined up along Second Avenue and 84th Street on Sunday night to enforce social distancing guidelines and combat the violations seen the night before, officials said.

‘If we have to shut places down, we will if they’re starting to violate these rules,’ de Blasio assured.

City Councilman Mark Levine, who chairs the Health Committee, blamed the recklessness on ‘quarantine fatigue’ and said he feared it might lead to a rebound in COVID-19 deaths. 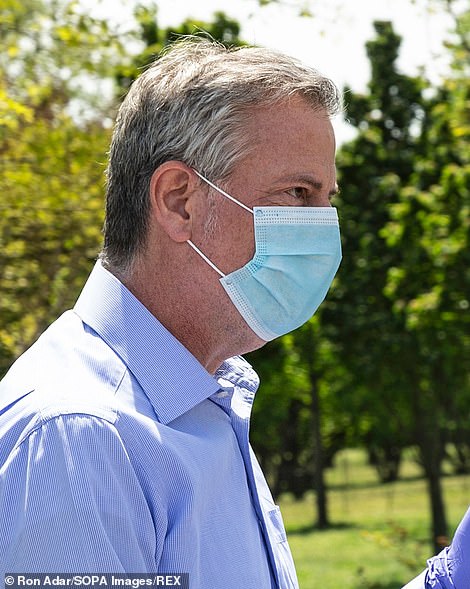 Levine warned it’s ‘only going to get worse as we head into a hot New York City summer’. The democrat urged de Blasio to plan for the safe outdoor use of streets, parks and beaches or risk driving ‘noncompliance underground’.

During his press briefing on Monday, de Blasio said the city may begin phased reopening in the first half of June, allowing construction to resume and retailers to reopen with some restrictions.

The state has identified seven indicators it must follow, including the number of  available hospital beds and number of COVID-19 hospitalizations, that it must meet to begin reopening.

According to de Blasio, New York has so far met three of those seven indicators.

In order to meet the remaining guidelines, the city must further drive down new hospitalizations, increase the share of total hospital beds available and increase its share of ICU beds.

‘There’s a real subtle balance that needs to be struck but if the question is do we believe we’ll meet all seven state indicators, yes. When? The first half of June,’ De Blasio said at a news briefing. ‘You can’t guarantee anything in life.’