Scores of schoolchildren around the world have walked out of their classrooms and trooped on to the streets for a second time to demand that politicians take action on climate change.

British students join striking counterparts in 120 other countries including New Zealand, Australia and Japan with an expected 2,000 rallies worldwide.

Hundreds of these placard-waving youngsters ditched their lessons and flocked to London’s Parliament Square this morning to try to grab the attention of MPs.

They chanted ‘this is what democracy looks like’ while primary school children, who were at the protest with their parents and holding handmade placards, shouted ‘climate change, boo!’

But the tone of the demonstration turned nasty when one group of teenagers went further, and shouted: ‘One two three four, Theresa May’s a f***ing w***e, five six seven eight, Corbyn is f***ing great!’

And a small group of protesters who stayed after the rally had finished to dance to rap music held signs that read ‘Theresa May is a t***’.

One of the speakers even said: ‘Do not f*** with us – it’s crazy, we’ve only got 12 more years before it’s irreversible.’

The walkouts are taking place in more than 100 UK towns and cities, including Kent, Edinburgh and Bristol, as part of a global day of action inspired by teenager Greta Thunberg who protests every Friday outside Sweden’s parliament.

Hundreds of placard-waving youngsters ditched their lessons and flocked to London’s Parliament Square this morning to try to grab the attention of MPs. Placards read ‘denial is not a policy’ and ‘system change not climate change’ 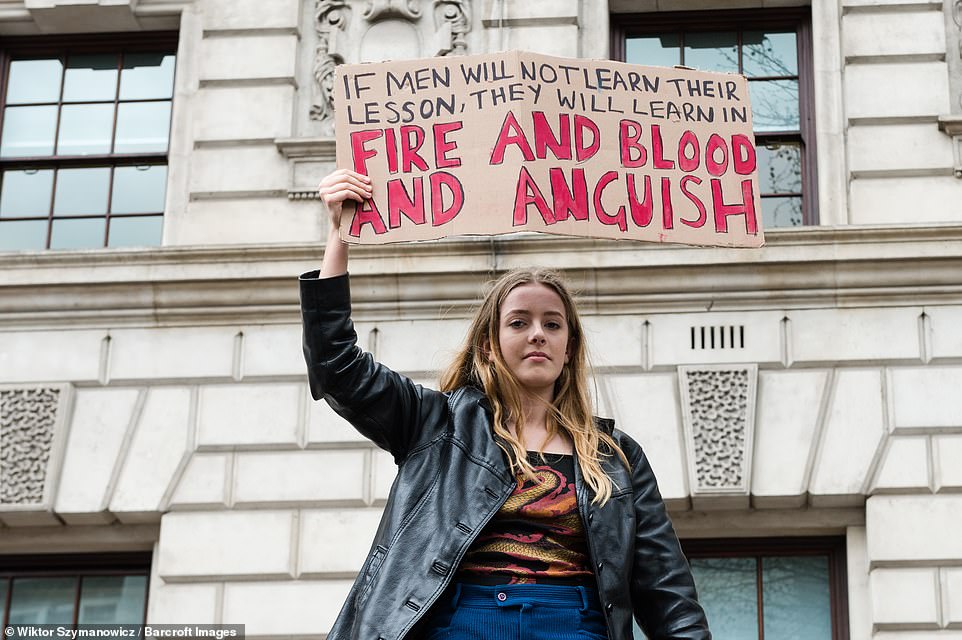 This young woman holds up a protest sign complete with a quote from the play An Inspector Calls, often studied for GCSE English. Scores of schoolchildren around the world have walked out of their classrooms to protest 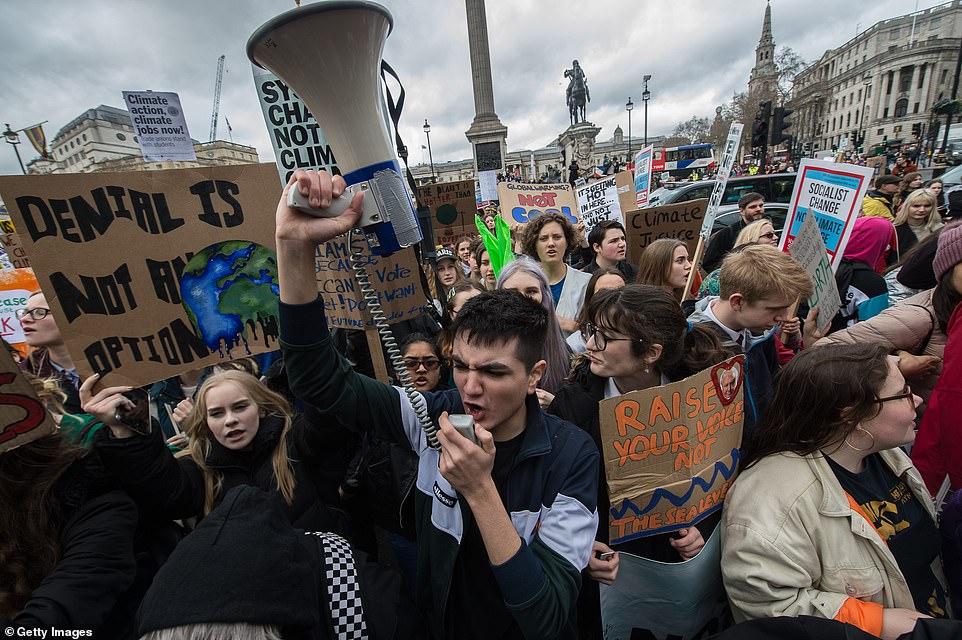 The young protesters were pictured in London’s Trafalgar Square holding up protest placards, with one reading ‘socialist change, not climate change’. The global day of action was inspired by teenager Greta Thunberg 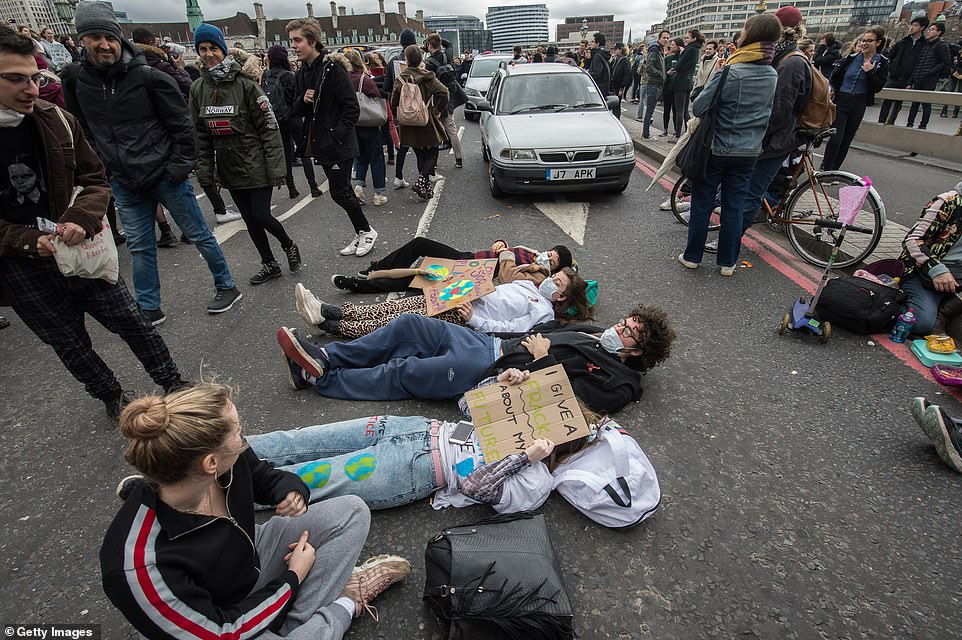 Protesters were even pictured blocking the traffic across London’s busy Westminster Bridge this afternoon. They are seen gathering in the road while three teenagers lying down with surgical masks on their faces 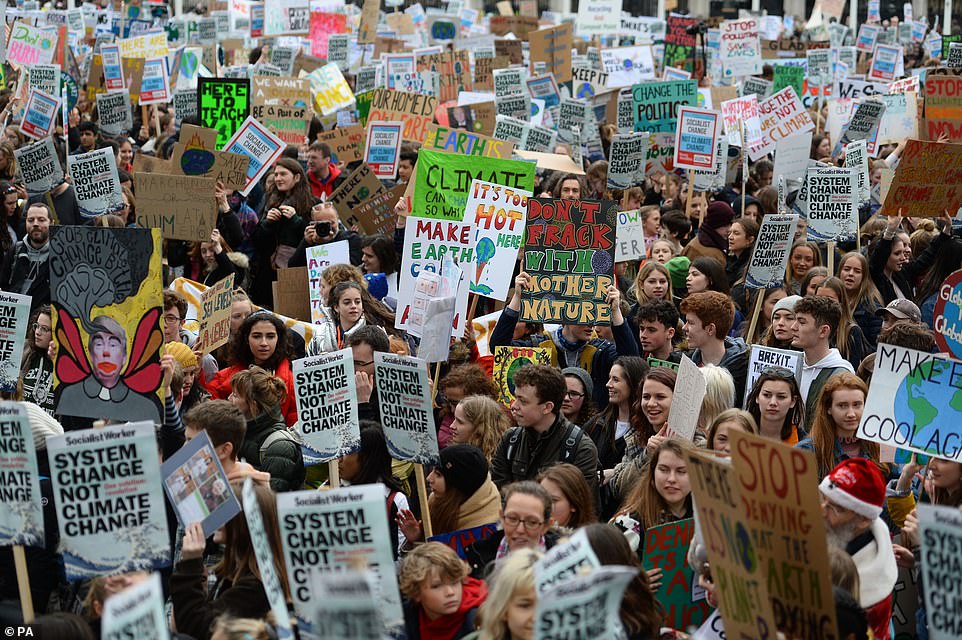 The students walked out of their classrooms and took to the streets across the world. Some 2,000 rallies are expected to happen globally including 100 events in UK towns and cities (Parliament Square pictured) 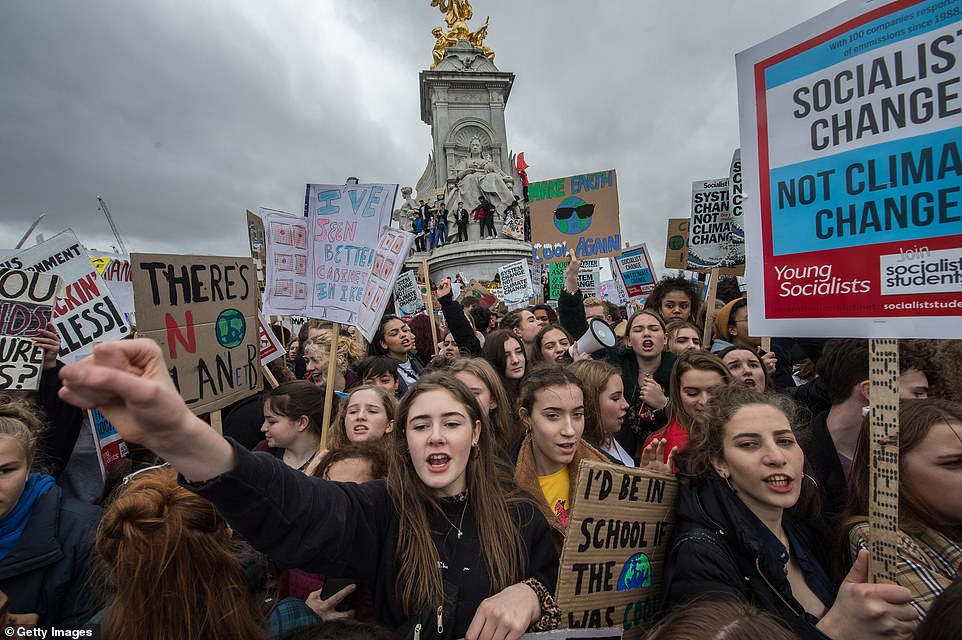 Some students were pictured standing on the Victoria & Albert memorial at Buckingham Palace, while others held signs. One protester’s sign read: ‘I’d be in school if the [Earth] was cool’ 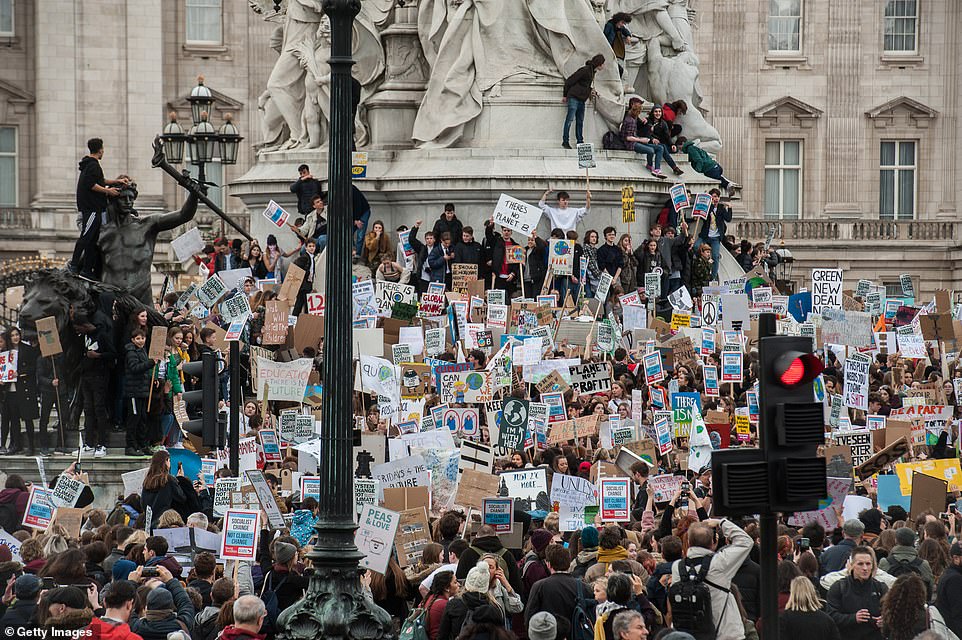 The young protesters are pictured on the Victoria & Albert memorial at Buckingham Palace this afternoon. They trooped on to the streets for a second time to demand that politicians take action on climate change 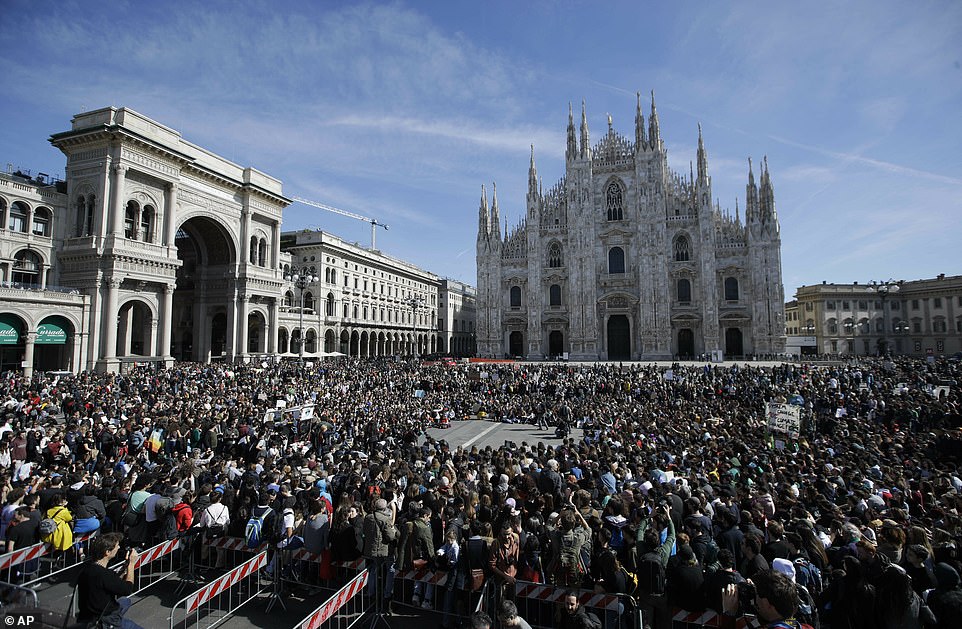 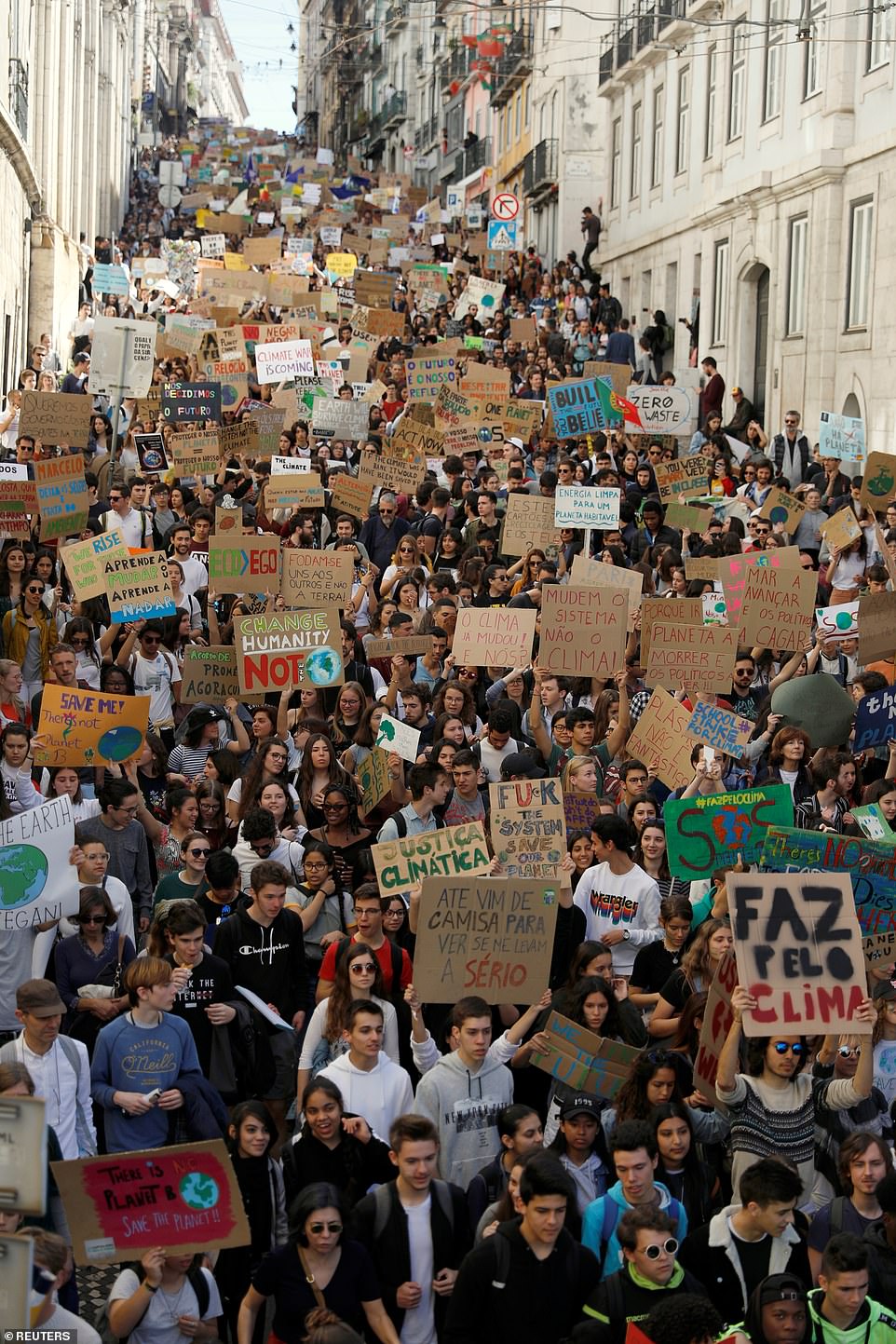 And thousands of students took to the streets in Lisbon this morning in protest. The global action day is inspired by teenager Greta Thunberg who protests every Friday outside Sweden’s parliament

Who is Greta Thunberg? Pig-tailed Swedish schoolgirl, 16, who skips classes every Friday in personal war on climate change 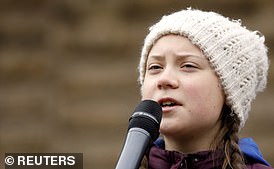 Greta Thunberg is seen on stage as she takes part in a protest calling for urgent measures to combat climate change, in Hamburg, Germany earlier this month

Greta Thunberg is a 16-year-old pig-tailed Swedish schoolgirl who has been obsessively researching climate change for seven years.

Since last summer, she has been skipping school every Friday to sit on the steps of the Swedish parliament, the Riksdag, with a home-made sign that reads ‘Skolstrejk för Klimatet’ (School strike for the climate).

She grows her own vegetables, refuses air travel and luxury hotels, even if the only option is a 32-hour train journey and a tent.

She accused the attendees at the United Nations Climate Change Conference in Poland in December 2018 of leaving the burden of climate change with future generations.

She said: ‘The protest in February was really big, but today is way more important and has been way more publicised. There’s been a lot of momentum, so I think it’s going to be big.

‘To put it bluntly, we’re here because our world is going to be destroyed. We have to change the pace of our culture, our society, our politics, our economics.

‘We have been silent for too long. There have been singular voices or movements that have always struggled against climate change, and for the environment and against pollution.

‘But this kind of global and coordinated and spontaneous, and especially youth movement, I’ve never seen this movement before.’

Thousands of students defied warnings from teachers and politicians when they bunked off on February 15 and the organisers predict that even more will skip classes to protest today.

While the youngsters may not have the support of Downing Street and education secretary Damian Hinds, who disapproves of the children missing school, an Opinium poll suggested that a majority of the public backs the walkout.

Although climate change is the cause which unites the protesters, some placards in London were emblazoned with socialism endorsements and some are campaigning for the voting age to be lowered to 16.

That includes cutting global carbon dioxide emissions by almost half within 12 years, and to zero by mid-century. 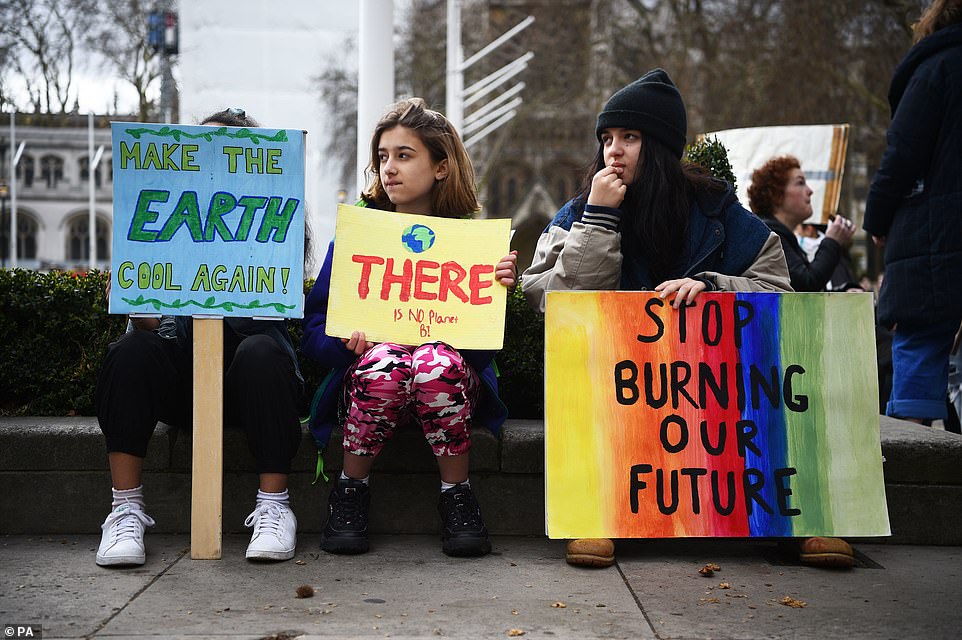 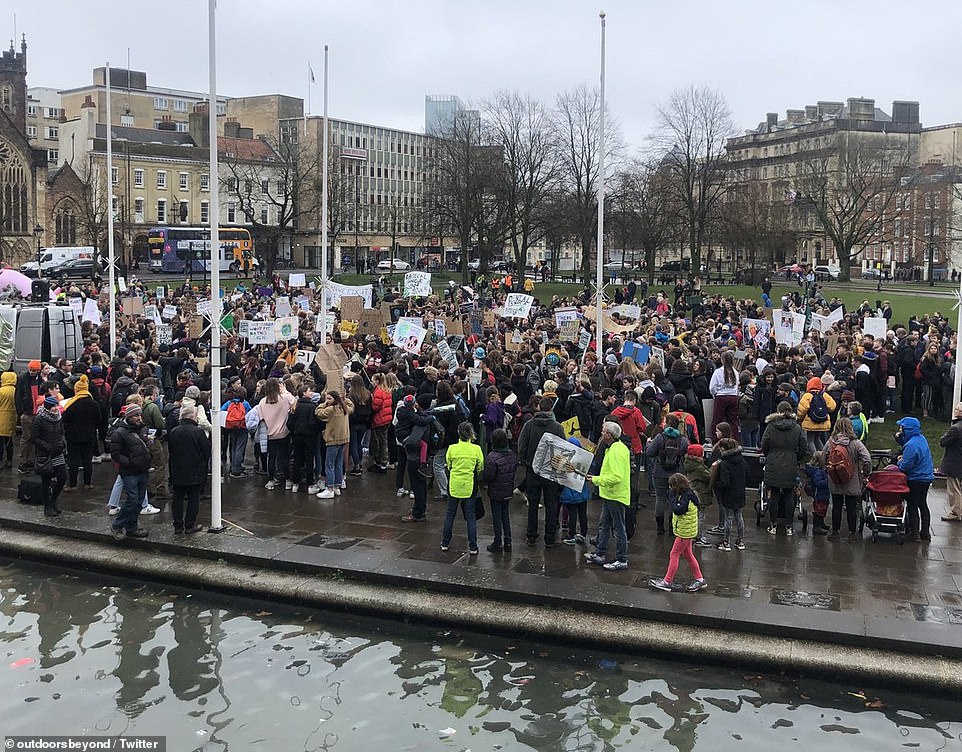 A large crowd gathered on Bristol’s College Green as part of the worldwide walkout. Students in Japan, Australia and New Zealand are also expected to take part 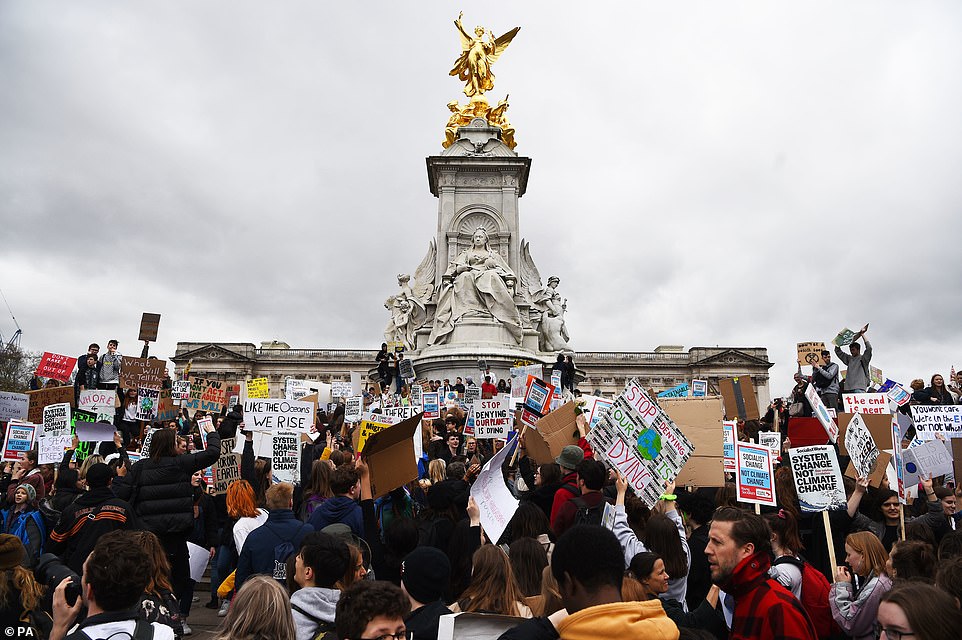 In London Joe Crabtree, 15, from south-west London, who is missing his GCSE mocks for the protest, said: ‘I’m here today to send a clear message to Government that I’m fed up with inaction on climate change.

‘I think they’re not doing enough to curb the problem that is climate change, leaving it to the side like us with homework, hoping it will get done, but it’s not being dealt with.’

In a video released ahead of Friday’s strikes, Mr Gove tells students walking out of lessons and lectures to call for urgent action on cutting emissions: ‘Dear school climate strikers, we agree.

‘Collective action of the kind you’re championing can make a difference, and a profound one.’

Mr Corbyn has also backed the strikers, tweeting: ‘Thank you for standing up against climate change. You shouldn’t have to pay the price for the mistakes of previous generations.’ 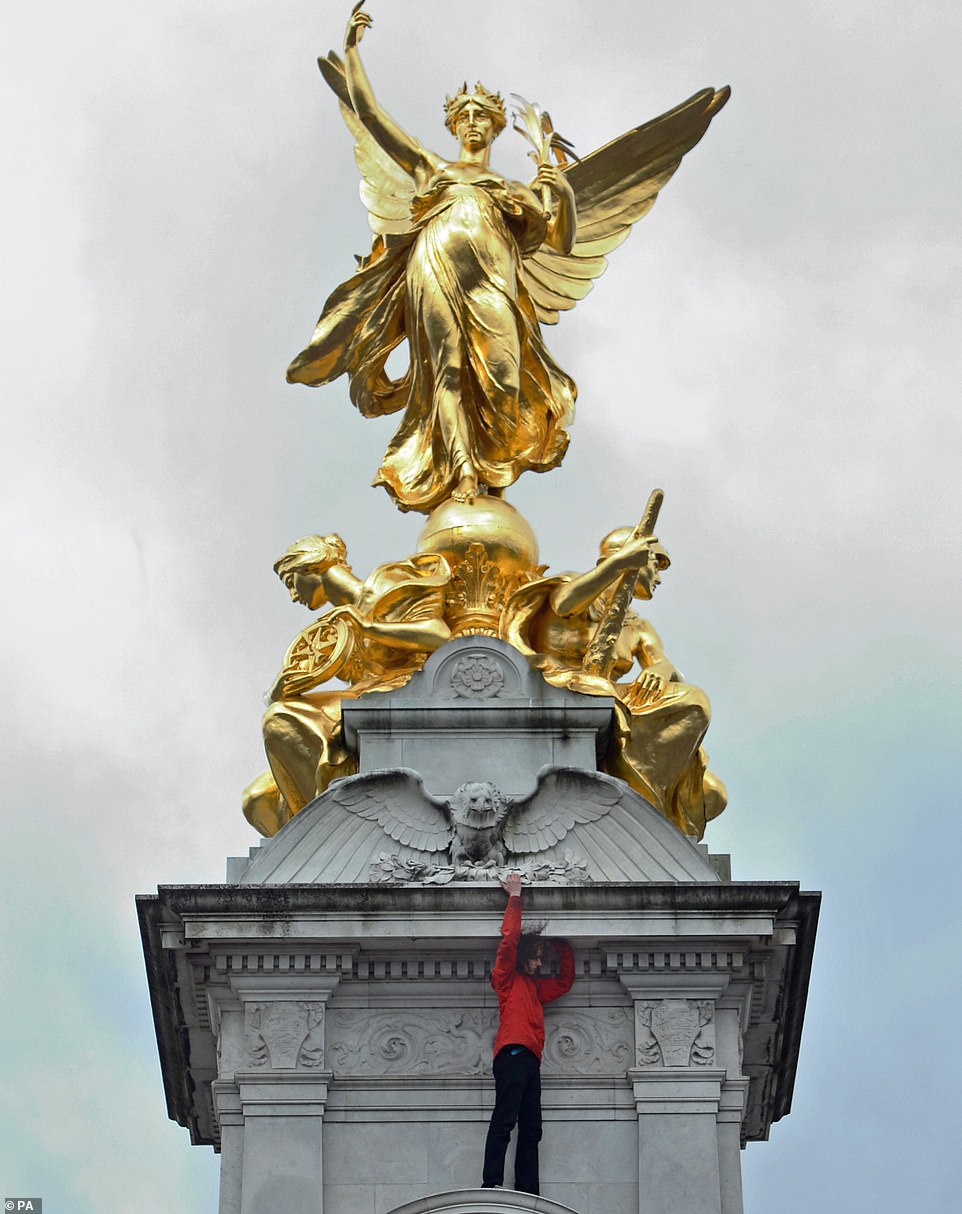 The demonstration outside the Houses of Parliament soon marched the short walk to the Mall where they descended outside the gates of Buckingham Palace. One protester climbed up the Queen Victoria Memorial outside the palace 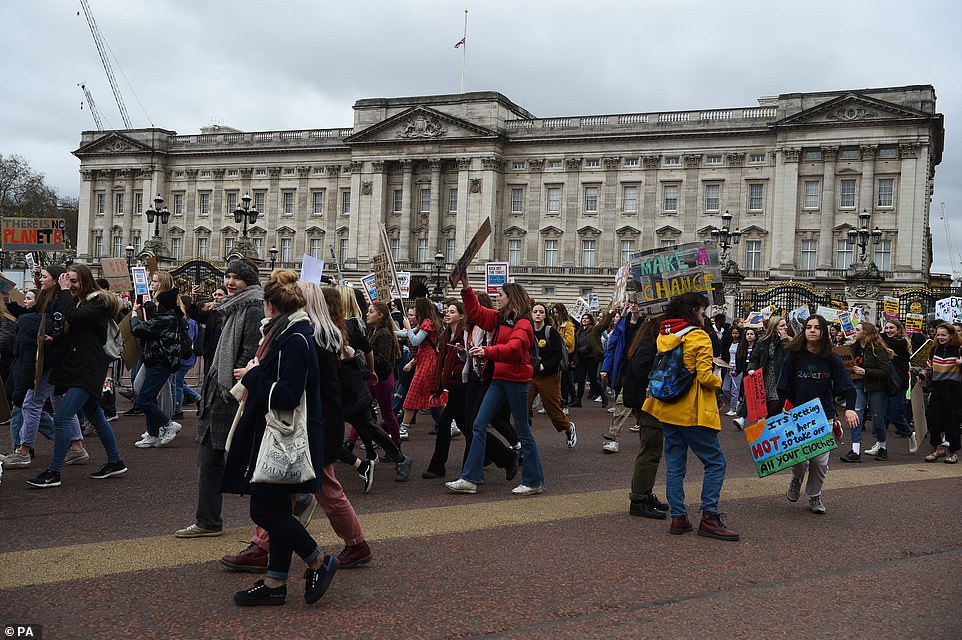 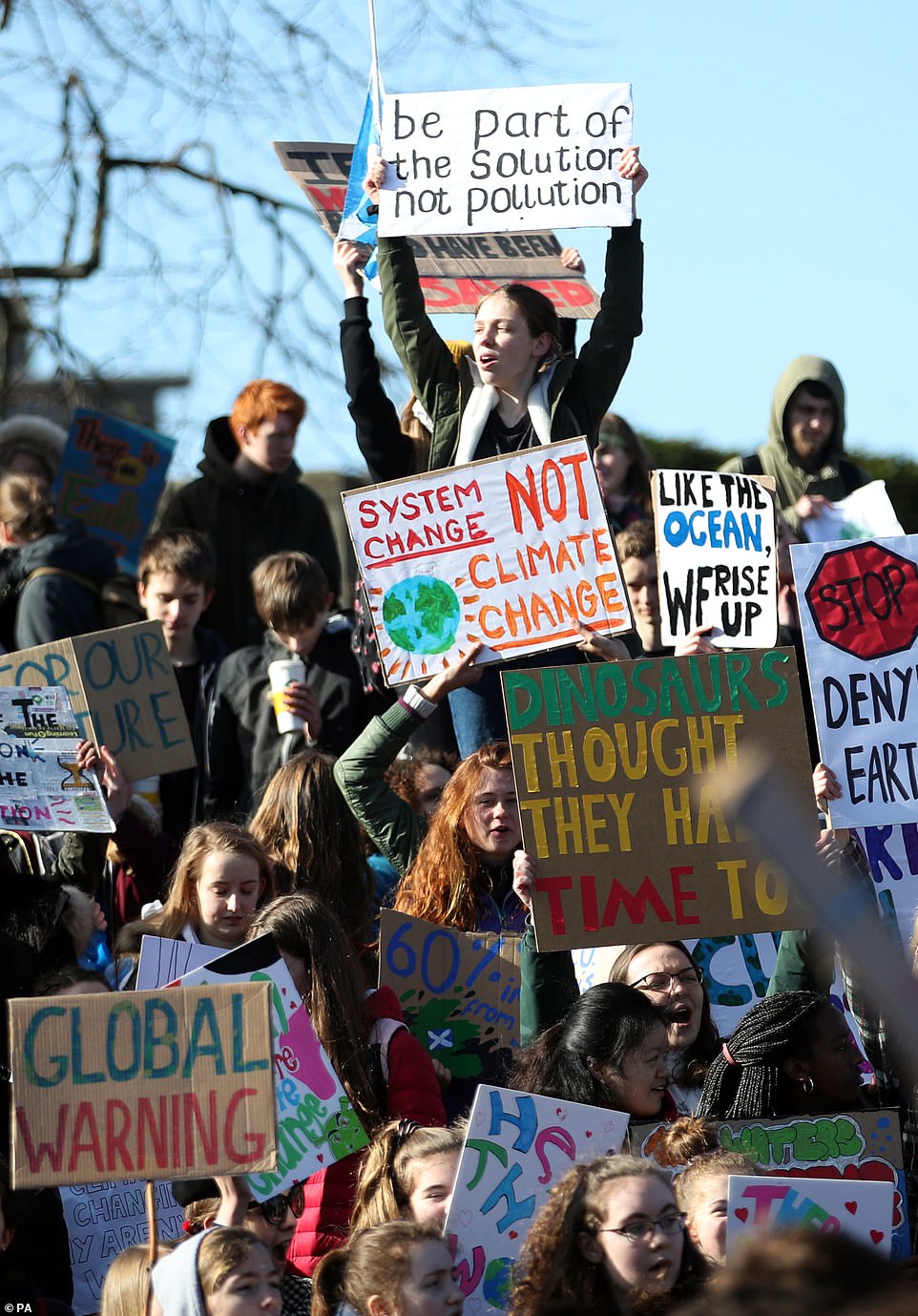 In Edinburgh, protesters demonstrate outside the Holyrood Scottish Parliament where temperatures sat at a biting 5C

Cat Smith, shadow minister for youth affairs, said Labour stands ‘in solidarity’ with young people across the UK taking action over the Government’s lack of leadership on climate change.

She said: ‘Today’s strike demonstrates that young people care deeply about environmental issues and will use their collective power to bring about meaningful change.

‘This should serve as a wake-up call to the political establishment that young people’s views can no longer be ignored, and urgent action is needed to tackle the escalating ecological crisis.’

Anna Taylor, 17, from north London, co-founder of the UK Student Climate Network and one of the organisers of the Youth Strike 4 Climate movement, said the Government was failing to recognise the severity of the crisis.

‘We’re here because we feel betrayed and we don’t feel we can trust them to protect our future, which is why we’re having to go on strike to make our voices heard, and let them know that unless they change something we will keep striking until they consider our demands. 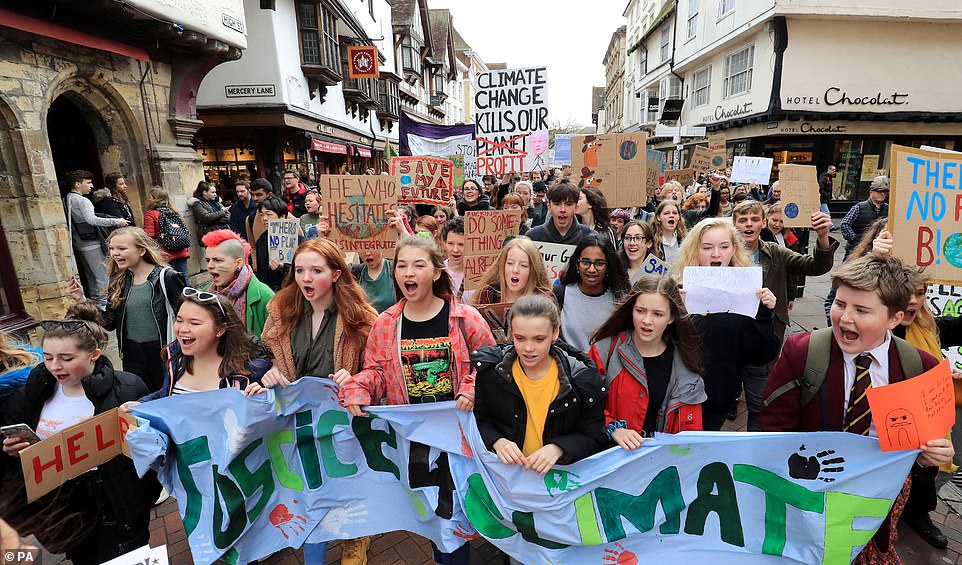 Students take part in a global school strike for climate change in Canterbury, Kent. One boy in school uniform appears to have walked straight out of school

‘Young people feel empowered by other young people, this is very much a student-led movement.

‘It’s something we all feel very passionate about, because it’s personal to us, it’s about our future. This is a broad movement and we are all striking in solidarity.

And United Nations climate change chief Patricia Espinosa said: ‘What we’re seeing is a clear message from youth throughout the world that nations must significantly increase their efforts to address climate change.

‘Given the urgency the world faces, it’s vital nations come up with more ambitious plans both this year and in 2020 as stated in the Paris Agreement.

‘This is how we will not only reach our collective climate goals, but how we will build a cleaner, greener and more prosperous future for all people.’ 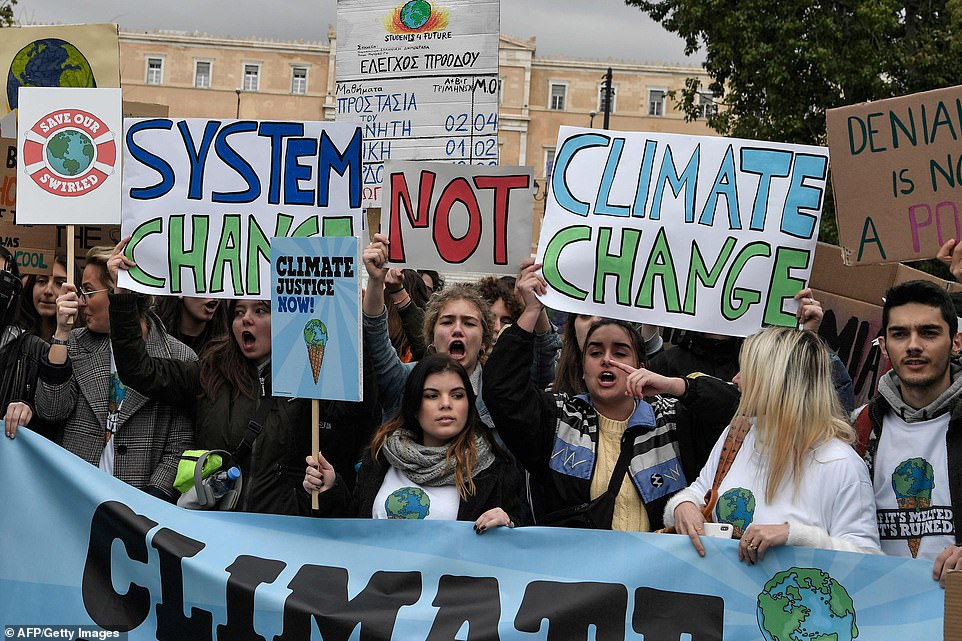 Young demonstrators hold placards and shout slogans as they participate in a protest against climate change in Athens, regarded as the birthplace of democracy 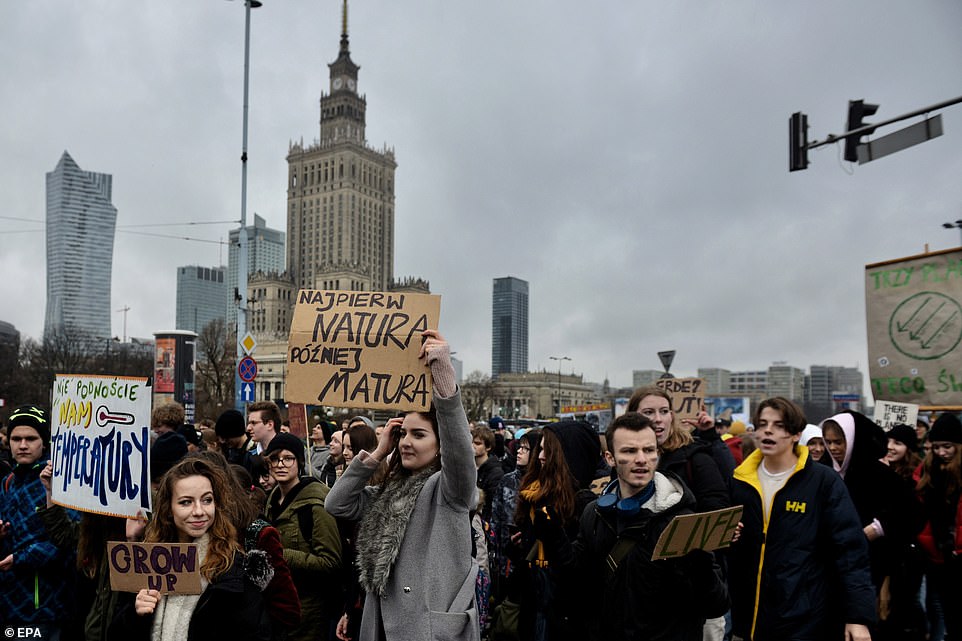 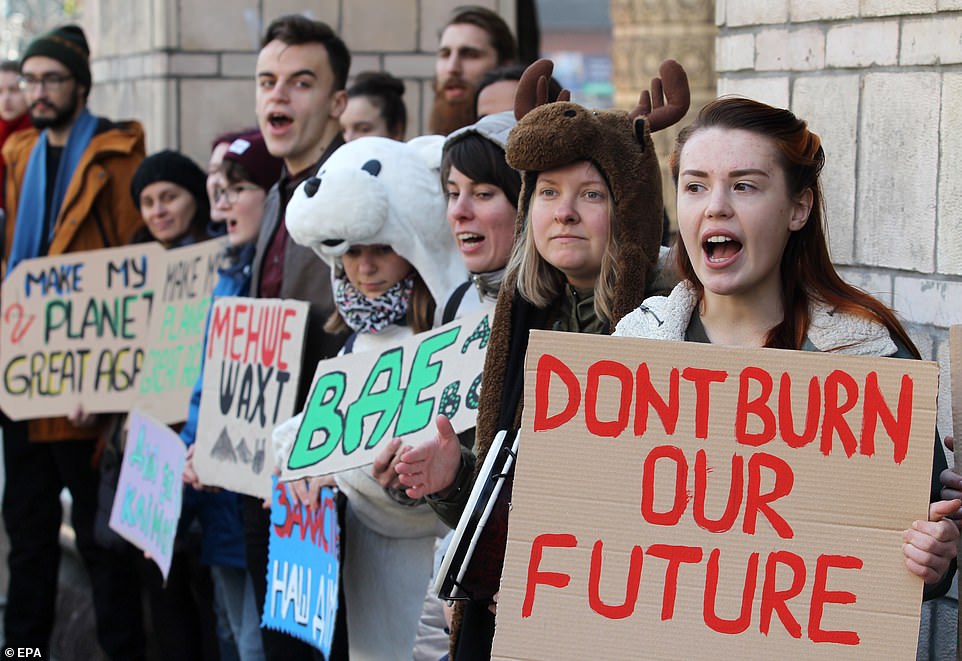 And in Kiev, Ukraine, students shout slogans during the ‘Global Climate Strike for future’ protest, in front the Ministry of Energy and Coal Industry