Hundreds trapped and thousands flee an area of northern California as blaze swells to 5,000 acres

Tens of thousands of people were ordered to evacuate a fast-moving wildfire that exploded in size Thursday, threatening several Northern California communities and forcing panicked residents to race to help neighbors and drive through walls of flames to escape.

The blaze destroyed an unknown number of structures and injured some civilians, but the extent of their injuries was not immediately known, said California Department of Forestry and Fire Protection Capt. John Gaddie.

As people fled in cars, some abandoned their vehicles, running from encroaching flames as they held babies and pets in their arms, said Gina Oviedo, who described a devastating scene as she evacuated the town of Paradise.

A home burns as the Camp Fire rages through Paradise, California 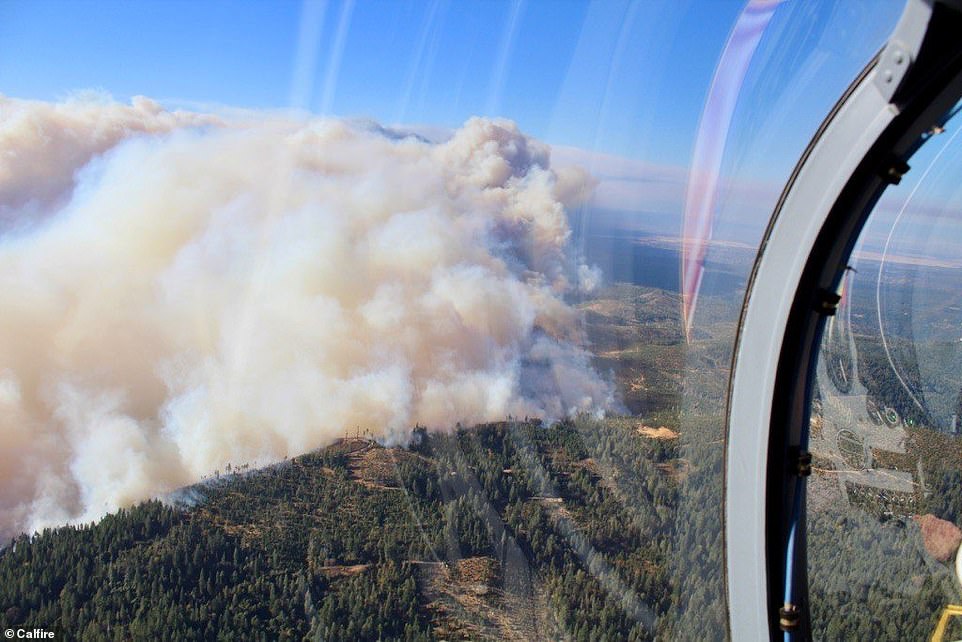 In the town of Paradise, about 180 miles northeast of San Francisco at least 27,000 people in the town were ordered to flee 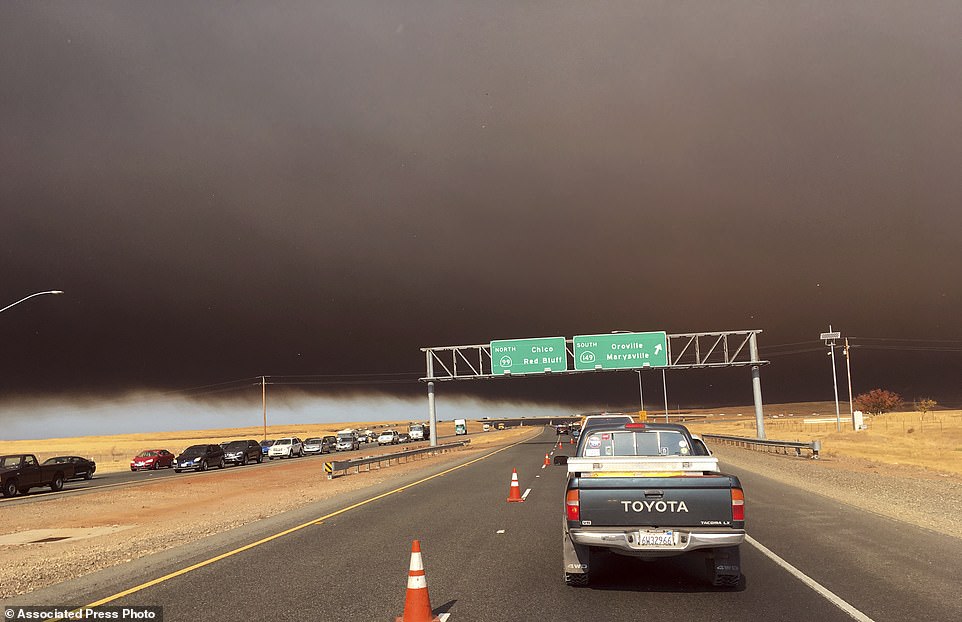 Smoke from the Camp Fire, burning in the Feather River Canyon near Paradise, Calif., darkens the sky as seen from Highway 99 near Marysville, California 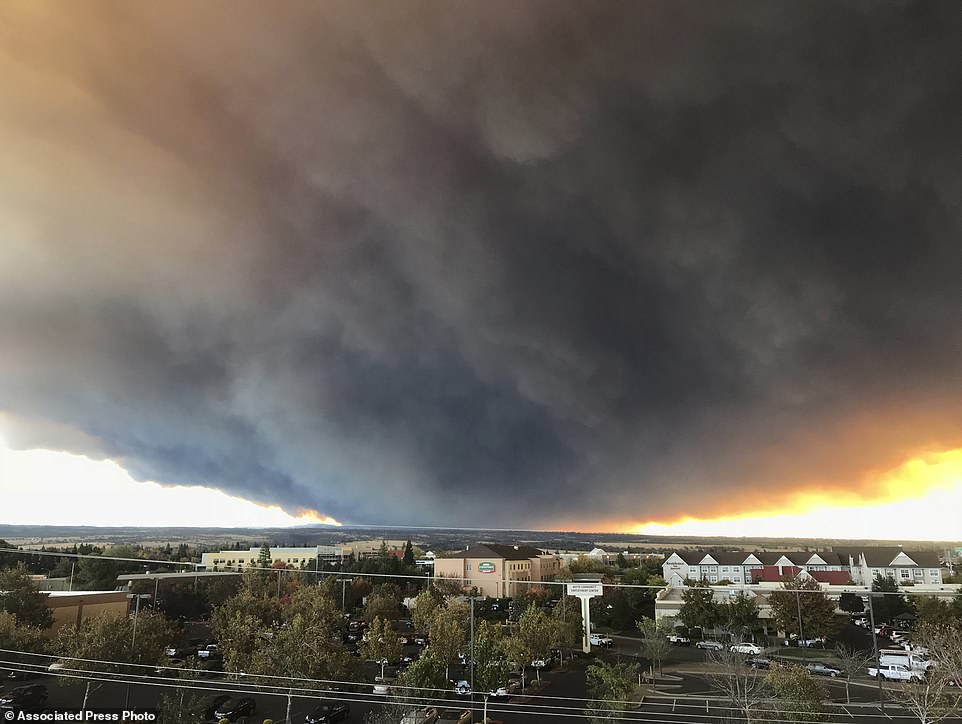 Authorities in Northern California have ordered mandatory evacuations in a rural area where the wildfire has grown to 1,000 acres amid hot and windy weather 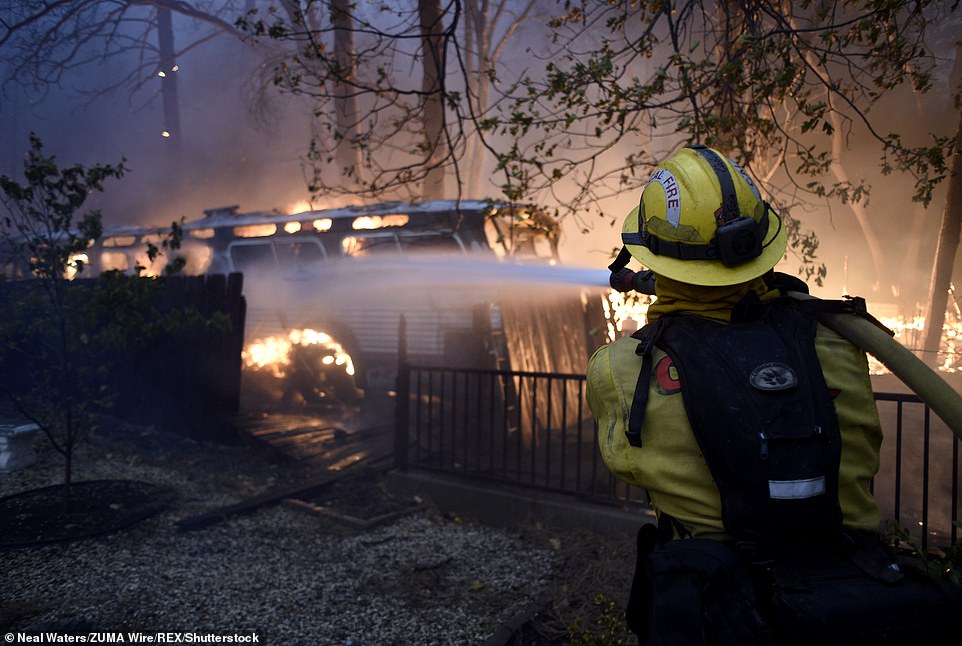 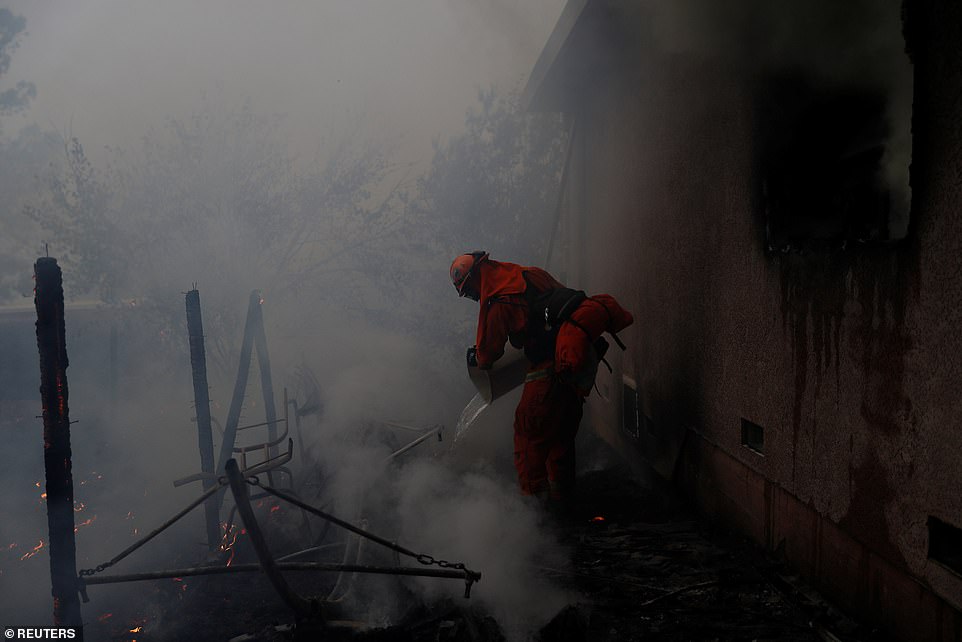 Flames were engulfing homes, utility poles were crashing down and things were exploding, she said.

Fire officials were working on a plan to rescue patients from a hospital after officials tried to evacuate them but had to turn back because of gridlocked traffic.

‘It’s a very dangerous and very serious situation,’ Butte County Sheriff Kory Honea told The Associated Press. ‘I’m driving through fire as we speak. We’re doing everything we can to get people out of the affected areas.’

He confirmed reports that evacuees had to abandon their vehicles as they fled the scene.

‘We’re getting them on other vehicles with room. We’re working very hard to get people out. The message I want to get out is if you can evacuate, you need to evacuate,’ Honea said. 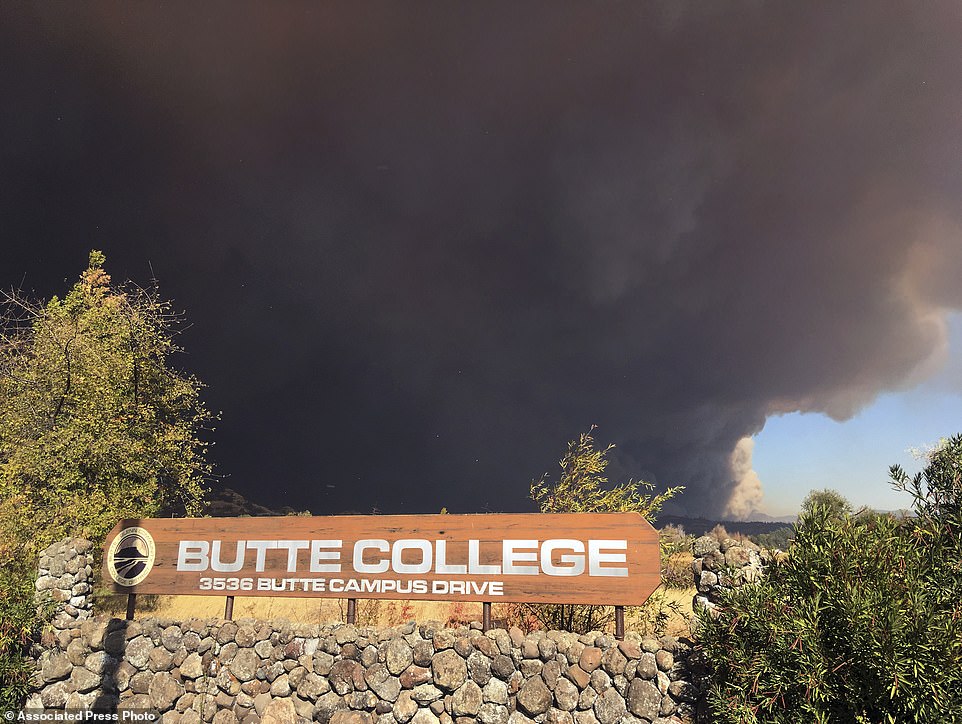 At least 27,000 people in the town of Paradise about 180 miles (290 kilometers) northeast of San Francisco were ordered to flee. 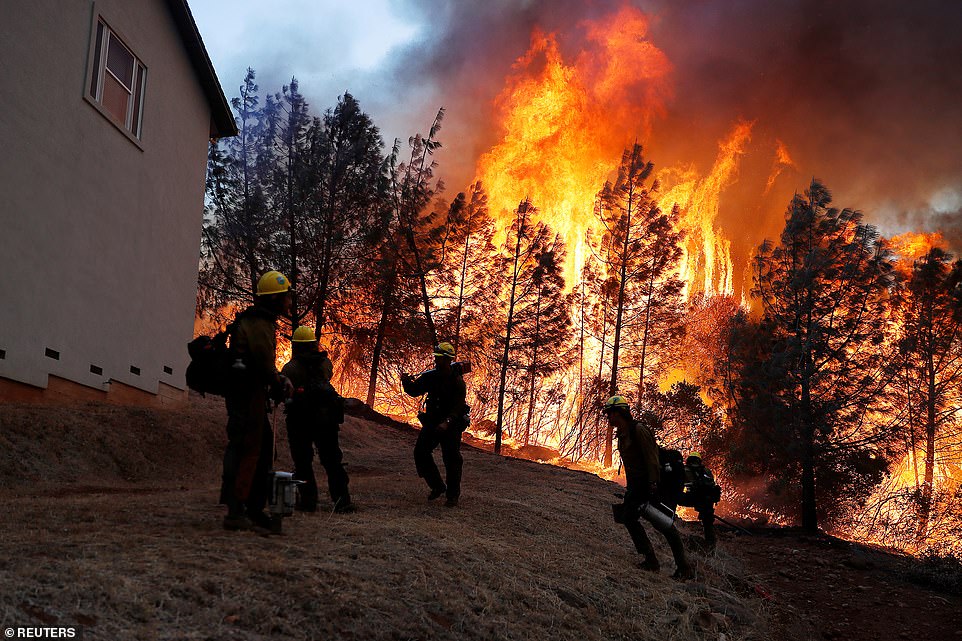 A group of U.S. Forest Service firefighters monitor a back fire while battling to save homes at the Camp Fire in Paradise 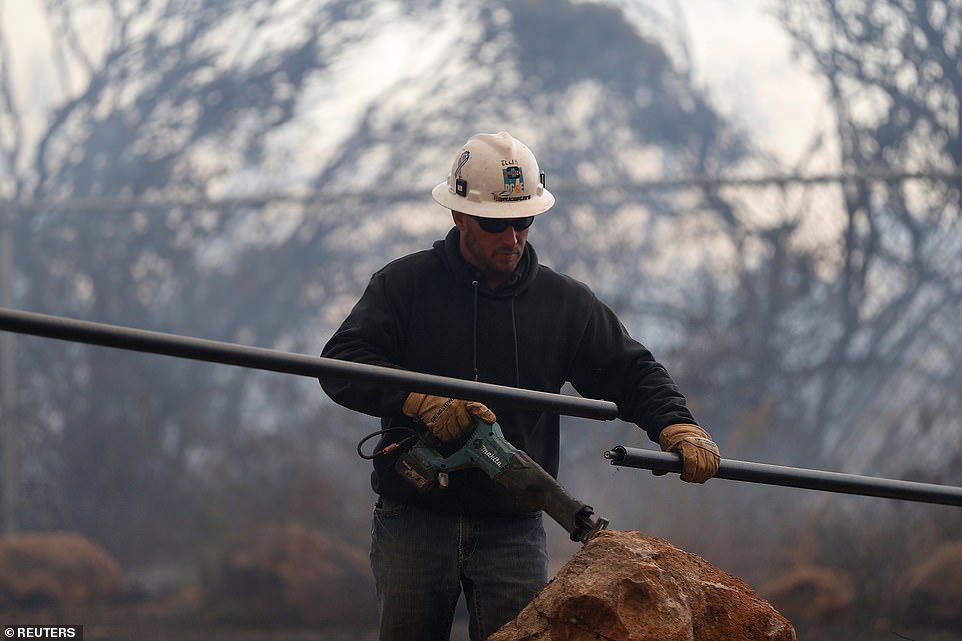 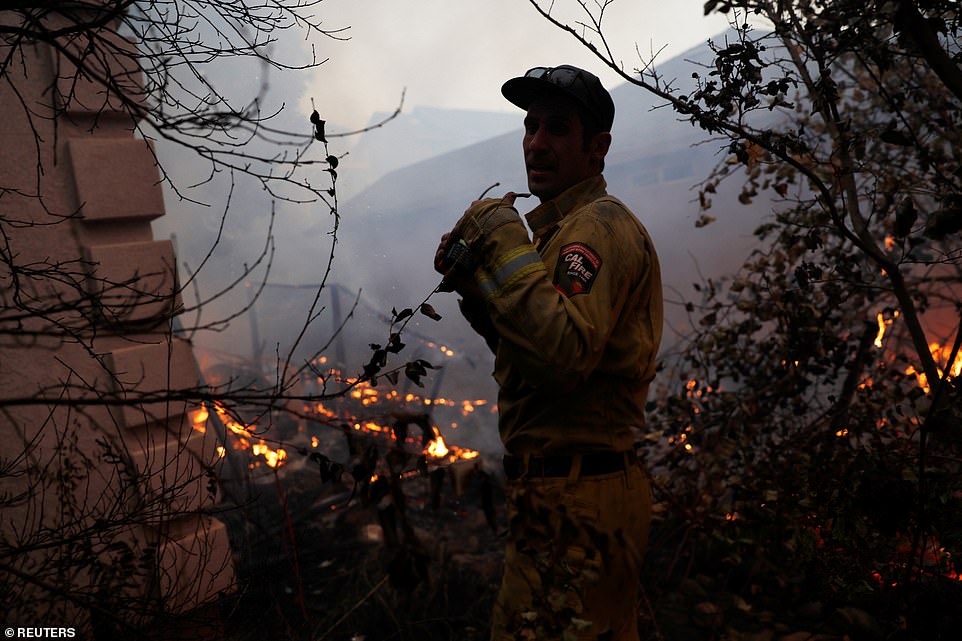 A Cal Fire firefighter monitors a burning home while battling the Camp Fire in Paradise, California 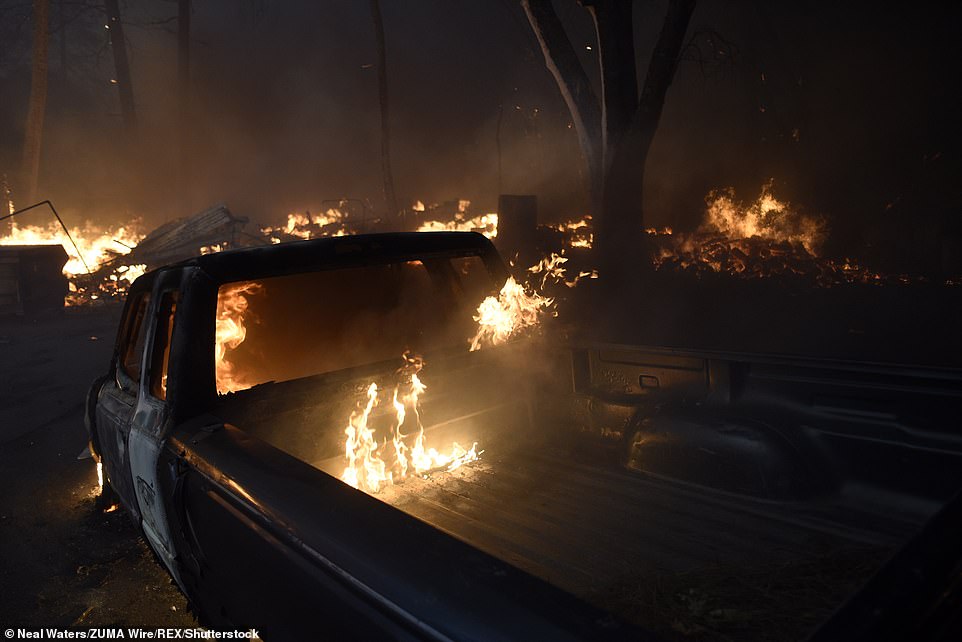 All of Paradise, a town of about 27,000 people 180 miles (290 kilometers) northeast of San Francisco, was ordered to evacuate, said Butte County Sheriff’s spokeswoman Miranda Bowersox.

The wildfire was reported at 6:30 a.m., Rick Carhart, a Cal Fire spokesman, said. Within roughly six hours, the fire had grown to more than 26 square miles (69 square kilometers), said Gaddie.

‘The blaze is being driven by fairly strong winds,’ Carhart said. ‘It’s really dry and we have low humidity – and unfortunately those are great conditions for a fire to spread.’

A hospital and several schools were evacuated as thick grey smoke and ash filled the sky above Paradise and could be seen from miles away.

The Adventist Health Feather River Hospital in Paradise evacuated staff and 41 patients to other hospitals, given its close proximity to the fire, said Jill Kinney, an Adventist Health spokeswoman. She said a group of 20 other patients were initially evacuated but then returned to the facility because of gridlocked traffic.

Gaddie, the fire official, said authorities were ‘working on a plan’ to rescue the patients. 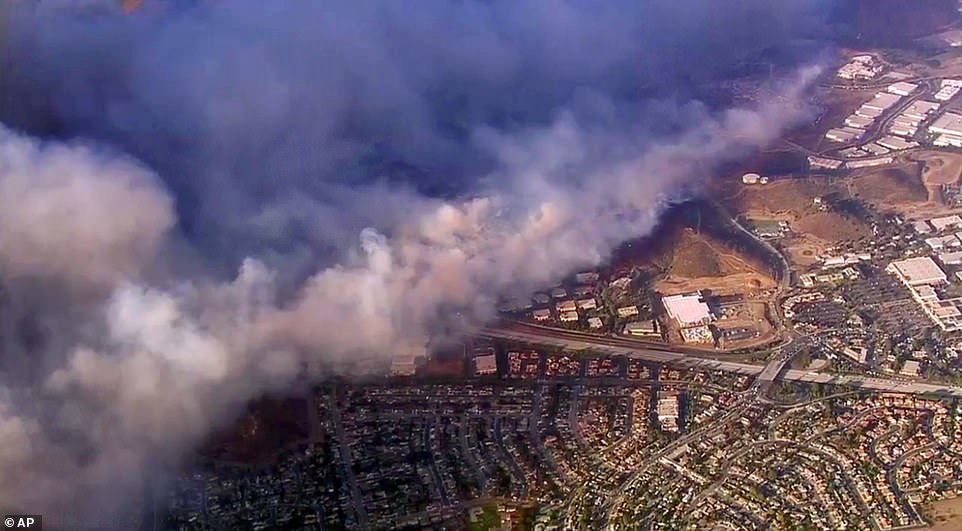 This photo taken from video provided by CBS2/KCAL9 shows a wildfire burning in Camarillo. Known as the Hill fire, it here has crossed U.S. Highway 101, at center right, potentially threatening hundreds of homes 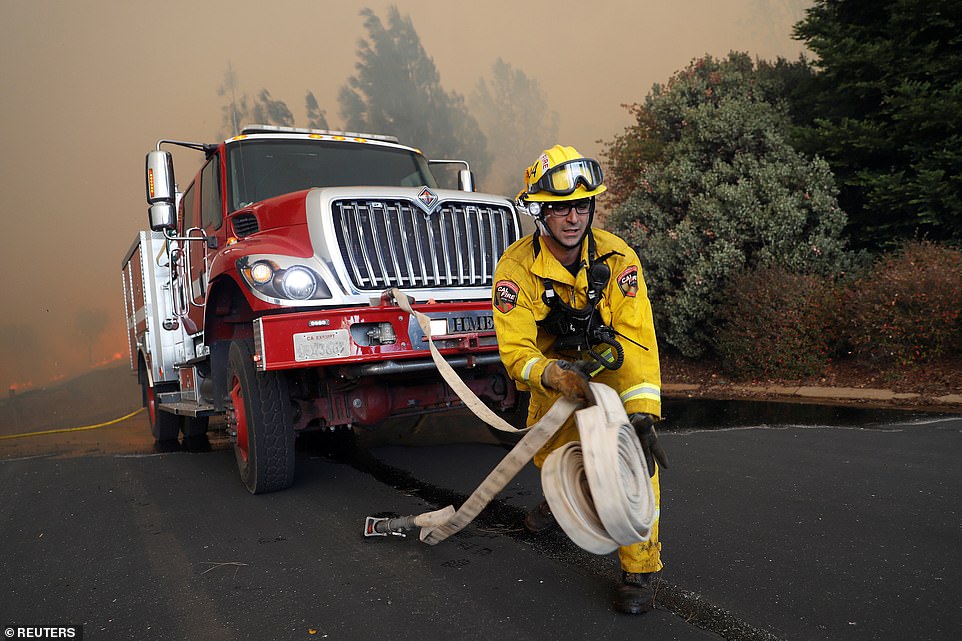 A Cal Fire firefighter unrolls a hose while battling the Camp Fire in Paradise, California 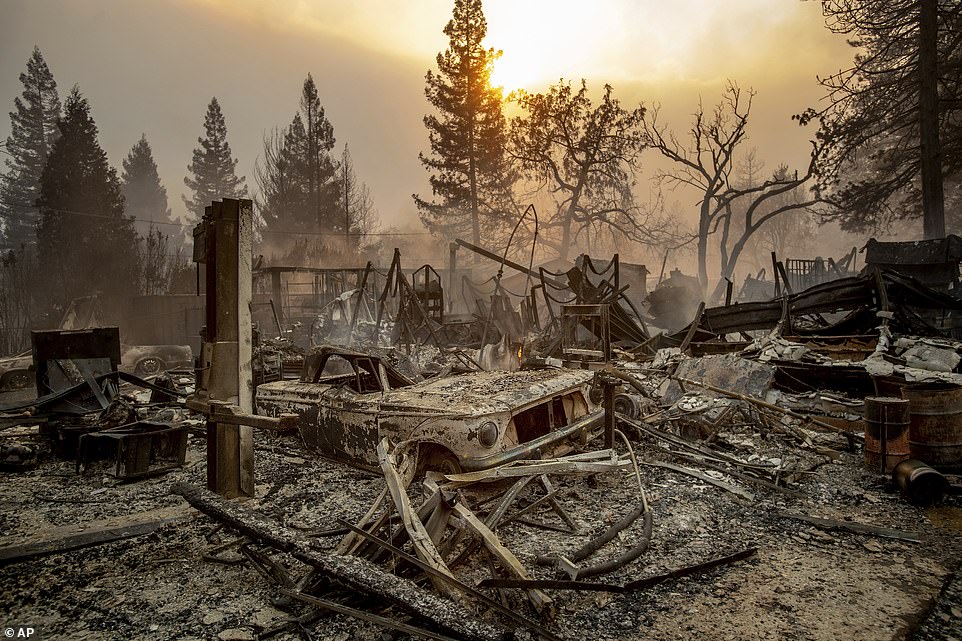 A vintage car rests among debris as the Camp Fire tears through Paradise. Tens of thousands of people fled a fast-moving wildfire Thursday in Northern California, some clutching babies and pets as they abandoned vehicles and struck out on foot 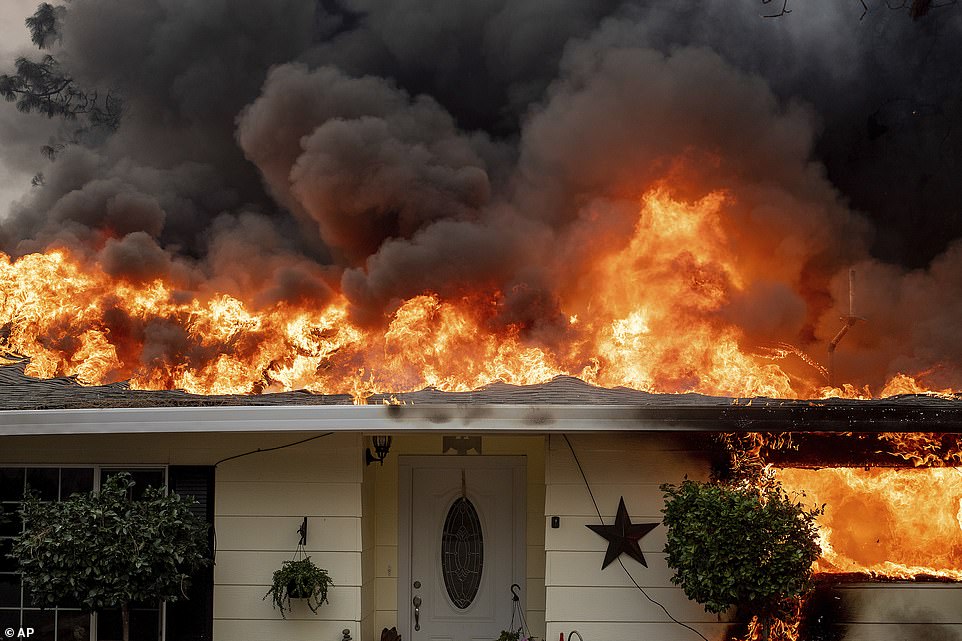 Flames consume a home as the Camp Fire tears through Paradise. A California fire official says a fast-moving wildfire in Northern California has destroyed structures and injured civilians 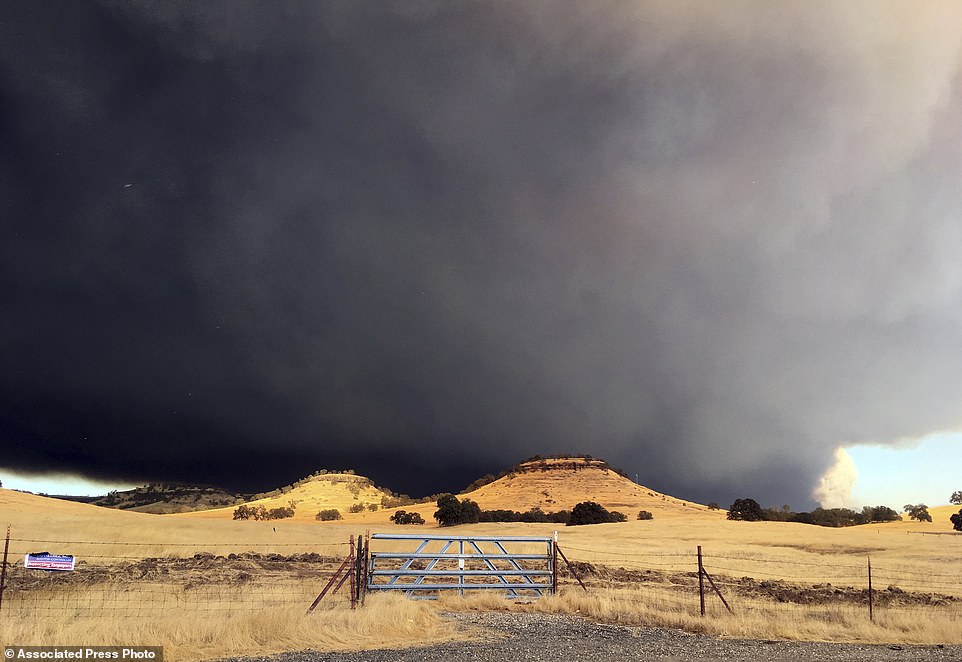 Some of the hospital’s ‘outbuildings,’ such as out-patient clinics caught fire and were damaged but the main hospital was not, said Kinney.

Four of the hospital’s employees were briefly trapped in the basement and rescued by California Highway Patrol officers, Kinney said.

Shari Bernacett said she and her husband tried to get people to leave the mobile home park they manage in Paradise and had minutes to evacuate.

She and her husband ‘knocked on doors, yelled and screamed’ to alert as many of the residents of 53 mobile homes and recreational vehicles as possible, Bernacett said.

‘My husband tried his best to get everybody out. The whole hill’s on fire. God help us!’ Bernacett said before breaking down crying. She and her husband grabbed their dog, jumped in their pickup truck and drove through flames before getting to safety, she said.

Officials were sending as many crews as they could gather, Carhart said.

‘Every engine that we could put on the fire is on the fire right now, and more are coming,’ he said. ‘There are dozens of strike teams that we’re bringing in from all parts of the state.’

The National Weather Service issued red flag warnings for fire dangers in many areas of the state, saying low humidity and strong winds were expected to continue through Friday evening.