Hungary’s right-wing parliament has voted to ban transgender people from changing their gender on identity documents on Tuesday.

LGBT+ advocates have said the move is creating panic among trans people who feared an increase in discrimination and attacks.

The legislature voted 133 to 57 to replace the Hungarian word ‘nem’, meaning sex or gender, with ‘sex at birth’ on birth, marriage and death certificates, which could expose trans people to harassment if their documents do not match their appearance.

Hungary’s right-wing Prime Minister Viktor Orban, in power since 2010, was re-elected in 2018 and promised to ‘build a new era’ with major cultural changes in the ex-communist country. Parliament’s speaker has equated gay adoption with paedophilia.

‘The state’s decision … to register children’s biological sex in their birth certificates does not affect men’s and women’s right to freely experience and exercise their identities as they wish,’ the government’s communications office said.

‘In no way does the relevant section of the bill that some people criticise prevent any person from exercising their fundamental rights arising from their human dignity or from living according their identity,’ it said in emailed comments.

His government has increasingly used anti-LGBT rhetoric as part of a perceived culture war, according to The Guardian, and has placed so called ‘traditional family values’ at the centre of many of his policies.

‘This decision pushes Hungary back towards the dark ages and tramples the rights of transgender and intersex people,’ said Krisztina Tamás-Sáróy of Amnesty International.

‘It will not only expose them to further discrimination but will also deepen an already intolerant and hostile environment faced by the LGBTI community.’

Daily life in Hungary requires people to show their ID frequently, leading to fears that this move will lead to increased discrimination against the already marginalised group.

‘It basically means coming out as trans to complete strangers, all the time,’ said Ivett Ördög, a 39-year-old trans woman living in Budapest, to the Guardian last month.

It is possible to legally change gender in all European Union countries bar Cyprus, advocacy group Transgender Europe says, despite growing criticism of trans rights as an attack on traditional gender roles by far-right and religious groups.

Trans people in Hungary have been effectively unable to change the sex on their identity documents since 2018, according to LGBT+ rights advocates, who said there were already multiple court cases underway challenging that.

‘We have no words to describe what we feel,’ Tina Korlos Orban, vice president of advocacy group Transvanilla Transgender Association, told the Thomson Reuters Foundation.

‘People who haven’t had suicidal thoughts for decades now are having them. People are in panic, people want to escape from Hungary to somewhere else where they can get their gender recognised.’ 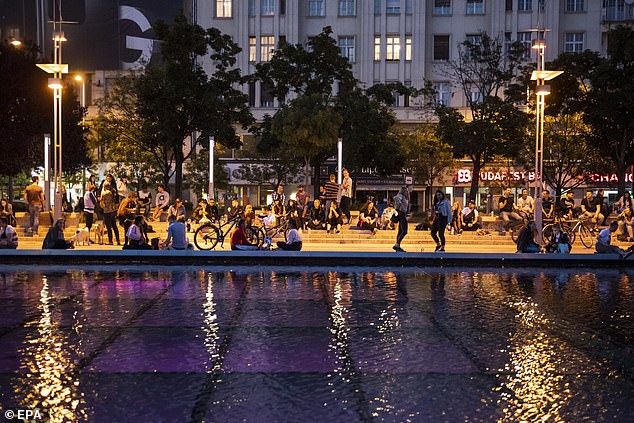 People sit on the grass on the Elizabeth Square in downtown Budapest, Hungary as the city eases curfew restrictions imposed to slow the spread of the coronavirus in the country

The government said the amendment resolved uncertainties being faced by courts and authorities in interpreting the word sex, which was not defined in the previous registry law.

Tamas Dombos, a board member of the Hungarian LGBT Alliance, said activists would lobby the president, an ally of Orban’s, not to sign the bill into law.

‘(The government) just doesn’t care about how it impacts the life of trans people … they could never provide any rational argument for why this bill is needed,’ said Dombos.

Advocates said they would challenge the law, which would also affect intersex people born neither clearly male nor female, in court in Hungary and at the European Court of Human Rights if necessary.

On March 30, the Hungarian parliament voted in favour of granting the government’s request for power to rule by decree during the coronavirus crisis, but contained no time limit.

While Orban promised to use the powers he had been given ‘proportionately and rationally’, it sparked fears that he would refuse to relinquish the powers once the coronavirus subsides.

Despite over 100,000 people signing a petition against the move, Parliament voted by 137 to 53 to grant the extra powers.

However, on May 15, Orban promised to give up the powers by the end of the month.

‘We successfully defended our homeland and our performance is comparable to any country’s,’ Orban said after a meeting with Serbian President Aleksandar Vucic.

He added: ‘We did this within a democratic framework and we will return to the usual parliamentary order.’

Hungary has reported 3,556 cases of the coronavirus, with 467 related deaths.