Nine passengers have died in a horrific minibus crash after their driver collided with a lorry while livestreaming himself on Facebook.

The crash, which occurred about 40 miles (60 kilometres) from Budapest, Hungary, on Tuesday, claimed the lives of nine Romanian foreign workers, and their driver – also a Romanian – who was taking them home.

He failed to see a lorry, which was transporting sand, while overtaking on a Hungarian road and crashed head-on. 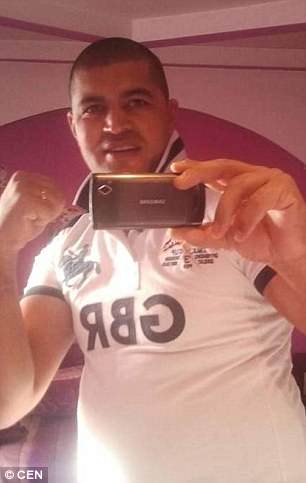 Nine passengers have died in a horrific minibus crash after their driver, Petru Kalau, collided with a lorry while livestreaming himself (above left, final moments) on Facebook 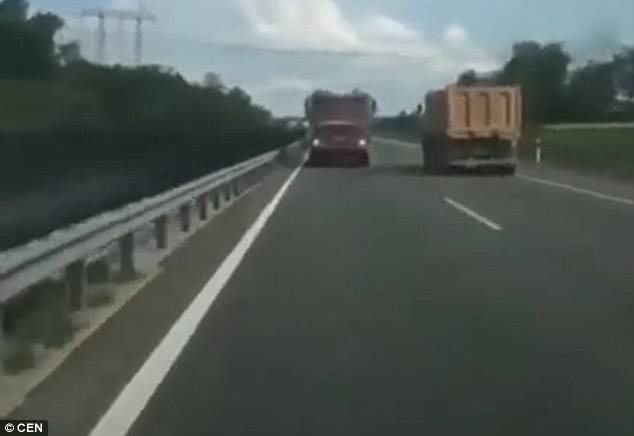 This picture shows a truck in front of the minibus, shortly before it collided, killing nine Romanian workers, and their driver. The final moments were captured during livestreaming on Facebook by the driver, who was also a Romanian

Harrowing video footage shows the passengers in the minibus listening to loud Romanian music, before it is cut off about one second before the moment of the impact, as the driver throws the phone to one side in a desperate bid to avoid a head-on collision.

Shocking footage was also published showing the aftermath, with mangled wreckage and bodies strewn across the road.

Romanian media has reported that 16 children lost their parents in the crash.

The mother of two brothers who lost their lives in the accident, Angelica Dumitru, told Romanian TV station digi24: ‘I had two boys in the car and one daughter-in-law. Now they are dead and their children can’t stop crying.

‘They went abroad to earn some money, to provide a better life for the family. They also started building a home and were gathering money for the construction. Now they will never finish it.’

Digi24 said that photographs of the aftermath, which showed the minibus destroyed by the impact, were like something from a ‘horror film’.

Police investigating the crash say that the driver, identified as 38-year-old Petru Kalau, did not have a licence for driving a multi-person vehicle.

All the passengers, along with the driver, were from the same county, Mures in Central Romania. 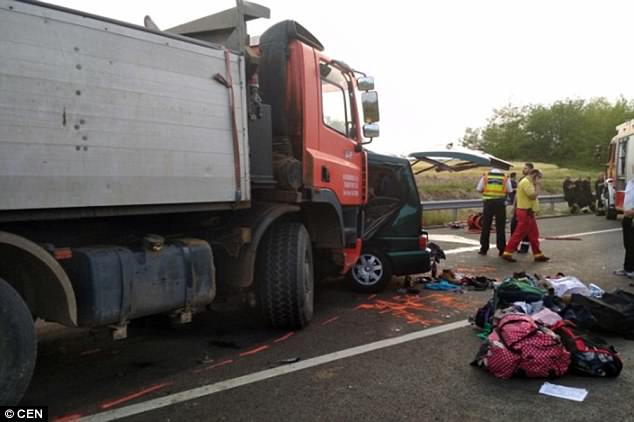 Above: emergency services at the scene of the collision. Romanian Ministry of Foreign Affairs spokesman, Paul Ciocoiu, said that all those killed in the crash will be repatriated to Romania

Szekely Ladislau, mayor of the commune of Mica in Mures County, said that the driver had valid insurance both for the vehicle and the passengers.

‘I spoke with the insurance company representatives in the morning after the accident and they said that the insurer will pay damages to the families of all nine deceased victims as specified in the contract,’ he said.

The Romanian Ministry of Foreign Affairs confirmed that all the victims are Romanians and Romanian authorities will carry all the procedures and costs for the repatriation of the bodies.

Romanian Ministry of Foreign Affairs spokesman, Paul Ciocoiu, said: ‘All the nine victims were confirmed to have Romanian citizenship. The bodies were taken to the morgue in Hungary for autopsies.

‘We are working with the Hungarian authorities in getting the bodies back to their homes in Romania as soon as possible. The Romanian Ministry of Foreign Affairs will cover all the costs.’

The driver of the lorry survived and is currently receiving treatment in hospital.

Local media said that the man regularly made trips to the rest of the EU where he would deliver Romanians to work and then drive them home again afterwards. It is believed most of those in the car had been picked up in Slovenia.