Hungry birds are using their brains to beat climate change

Some have learnt to drop bread or insects on the water as bait to tempt fish to the surface.

Others have changed their diet, with carrion eaters finding new prey or even going vegetarian.

There are also instances of birds using the turbulence caused by trains or ships’ propellers to aid their hunt for food, according to evolutionary biologist Dr Simon Ducatez of McGill University in Montreal, Canada.

A Peregrine Falcon coming into land on a tree, they have learned new ways of hunting

Species that learn fresh ways to cope with climate change and deforestation are less vulnerable to extinction, he said.

‘A peregrine falcon used a train to attack birds as they were flushed by its passage through the forest.

Another was observed using fishing vessels as platforms for hunting petrels at sea.

‘Great cormorants have been watched timing their fishing strategy with the movement of ferries at a wharf.

They use the strong currents generated by the propellers to catch confused fish.’

Dr Ducatez, one of the authors of the study, published in Nature Ecology and Evolution, added: ‘We long suspected this relationship between innovation and survival must exist, but now we have been able to verify it quantitatively.

His team analysed global data on more than 8,600 bird species over six decades. 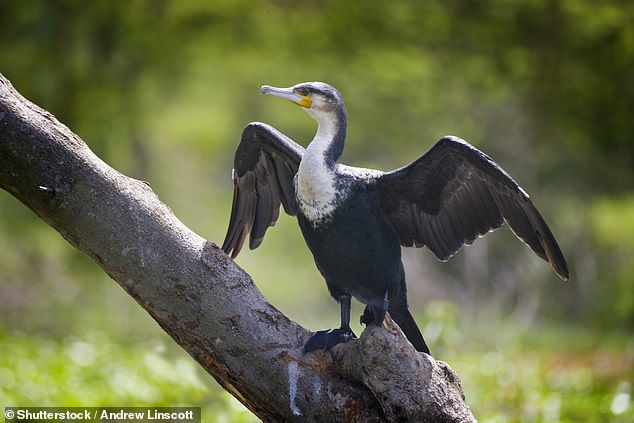 They recorded 3,800 new feeding techniques, including birds opening sugar packets on terrace cafe tables and gulls dropping mussels on to rocks to break the shells.

A Himalayan griffon vulture that would usually eat carrion was spotted feeding on pine needles in India.

Dr Ducatez said: ‘Some of these remarkable observations were made in the UK. For instance, great egrets have been seen using a piece of bread or insects as fishing bait.

‘This is a fascinating behaviour also occasionally observed in other herons and some gulls.

‘Opportunistic carrion crows have been observed using cars as nut or seashell-crackers.

‘Corvids, raptors and gulls are among the most innovative birds.

‘A kelp gull has been seen dropping a mussel to break it on hard rocks in New Zealand.

‘Ravens and red kites do the same.

‘Some birds exhibit problem-­solving abilities that rival those of a primate.’

Using a computer model, the researchers found the new techniques in food gathering helped combat the effects of change to their habitats – the main threat they face – but did not protect birds against invasive species, or hunting and trapping by humans.