Donald Trump was spotted sipping his trademark Diet Coke at a cheeseburger-laden table while watching the Saudi-backed LIV golf tournament at his New Jersey golf club. The former president could be seen sipping the drink through a straw while wearing a MAGA hat in Bedminster Friday. He was snapped close to his son-in-law Jared Kushner, and athlete-turned-socialite Caitlyn Jenner. 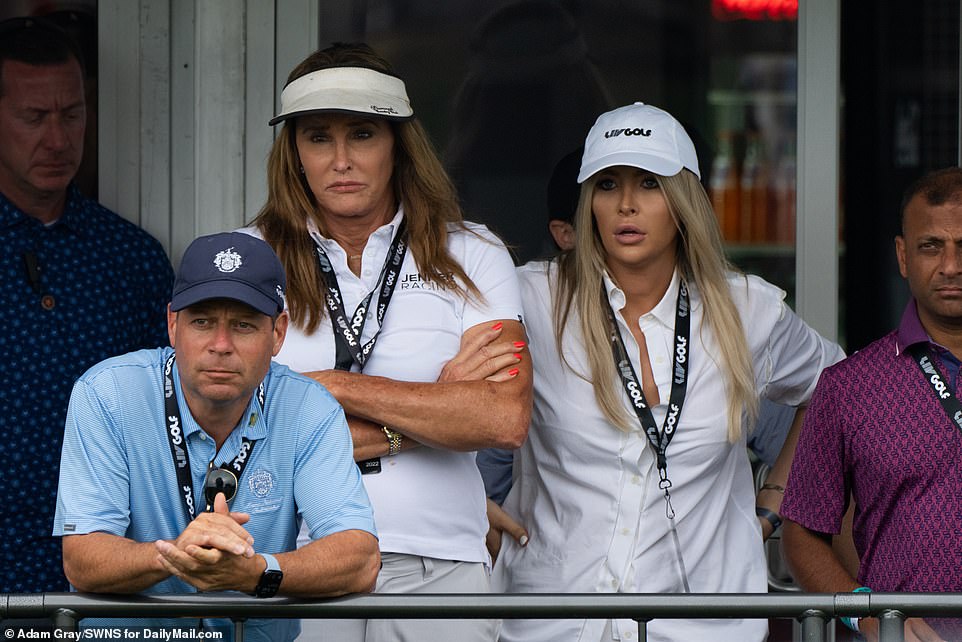 Jenner, an outspoken Republican and longtime friend of Trump’s, was spotted with her long-rumored girlfriend Sophia Hutchins (right). Jenner competed in the tournament with British golfer Paul Casey, who reportedly said ‘she has a pretty good swing.’ 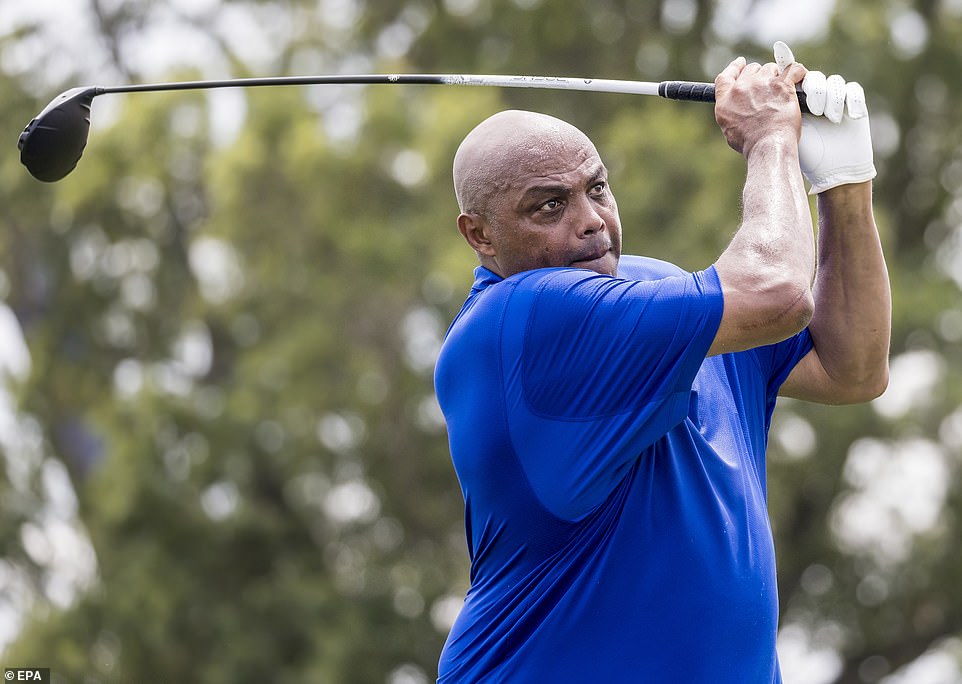 Former NBA star Charles Barkley (pictured) also competed at the event with Sergio Garcia and Louis Oosthuizen. LIV reportedly offered Barkley a deal to join their broadcast team, but no deal has been reached. LIV have not yet signed a TV deal. 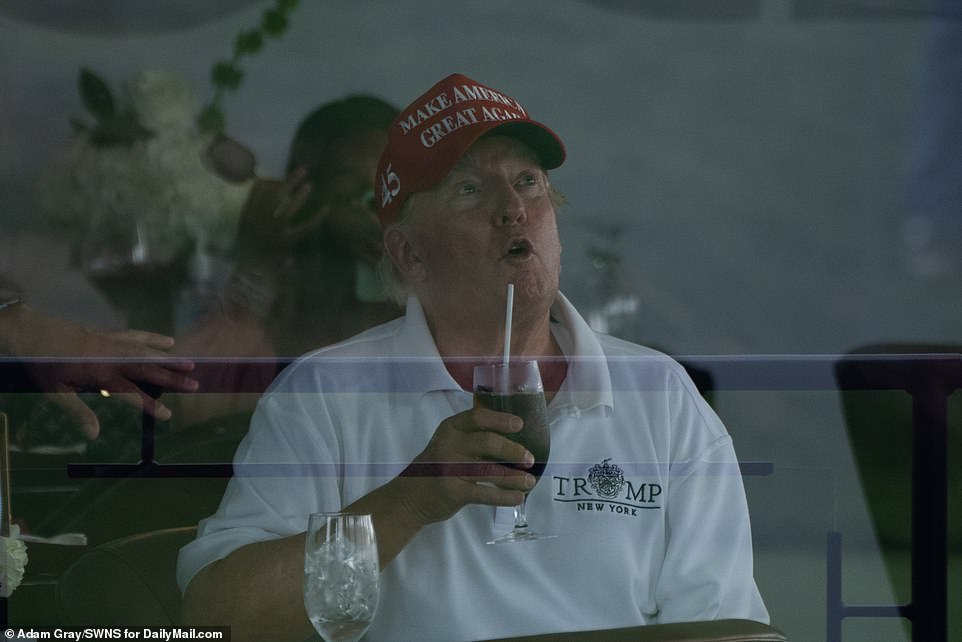 The tournament, which bears the slogan ‘Golf but louder,’ has divided the world of sport. 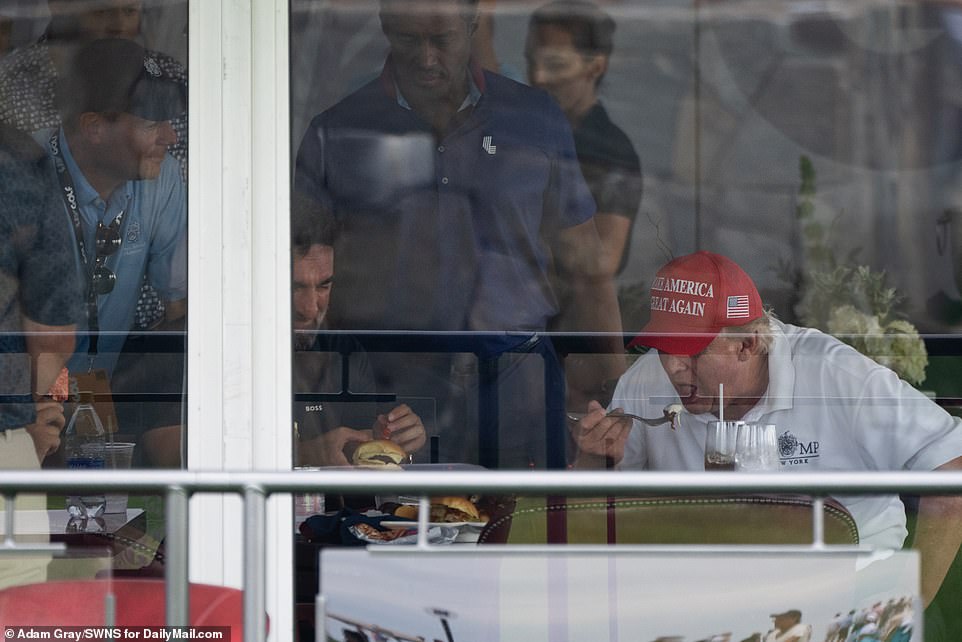 Some athletes refuse to take part in protest against Saudi Arabia’s track record of human rights abuses, and the event has been eviscerated by the families of 9/11 victims, in light of a recently declassified government report which suggests there were links between the terrorists involved in the attack and the Saudi Arabian government. 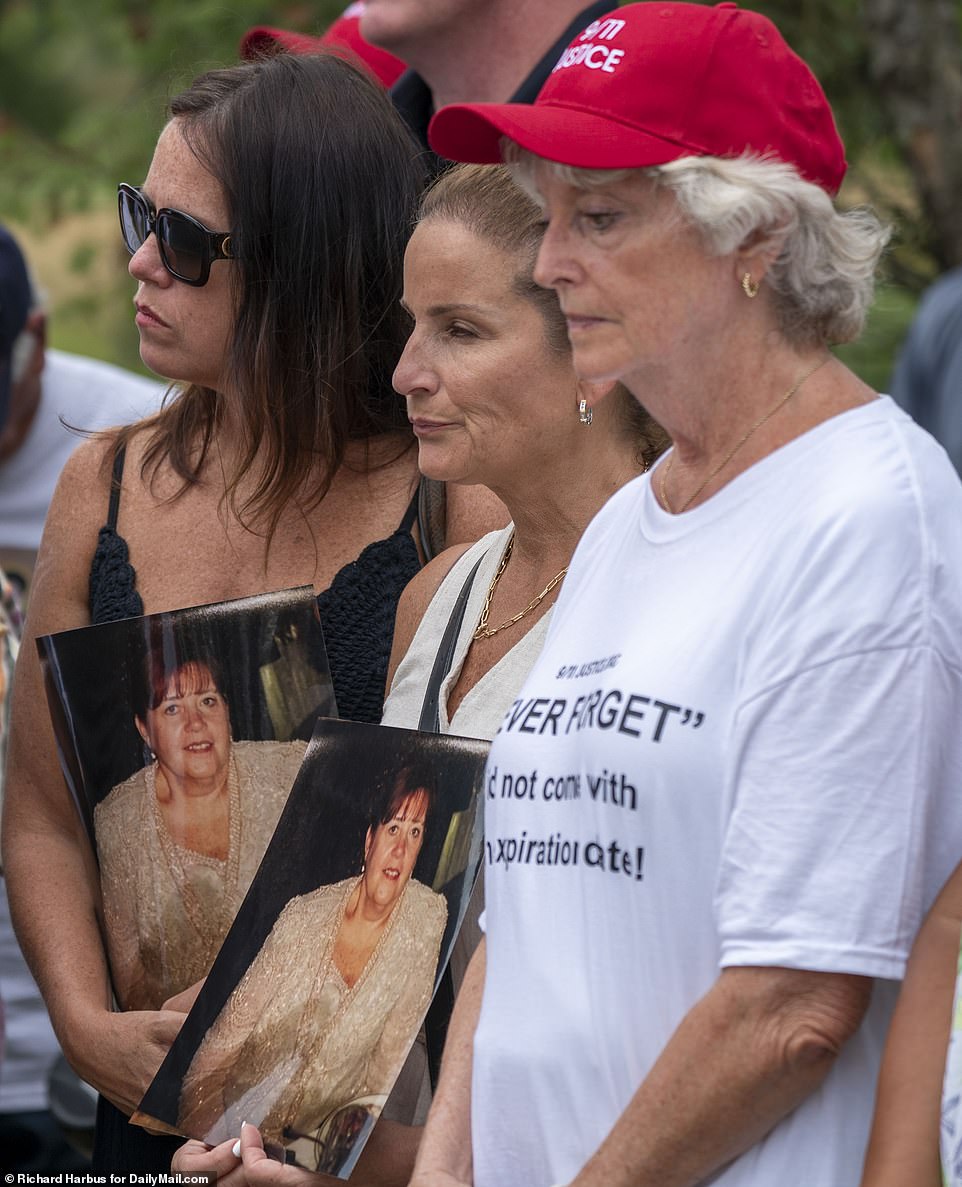 On Saturday, many of those families gathered at the local library near Trump’s club in order to protest. They couldn’t get near the actual event – which was swarming with Secret Service. 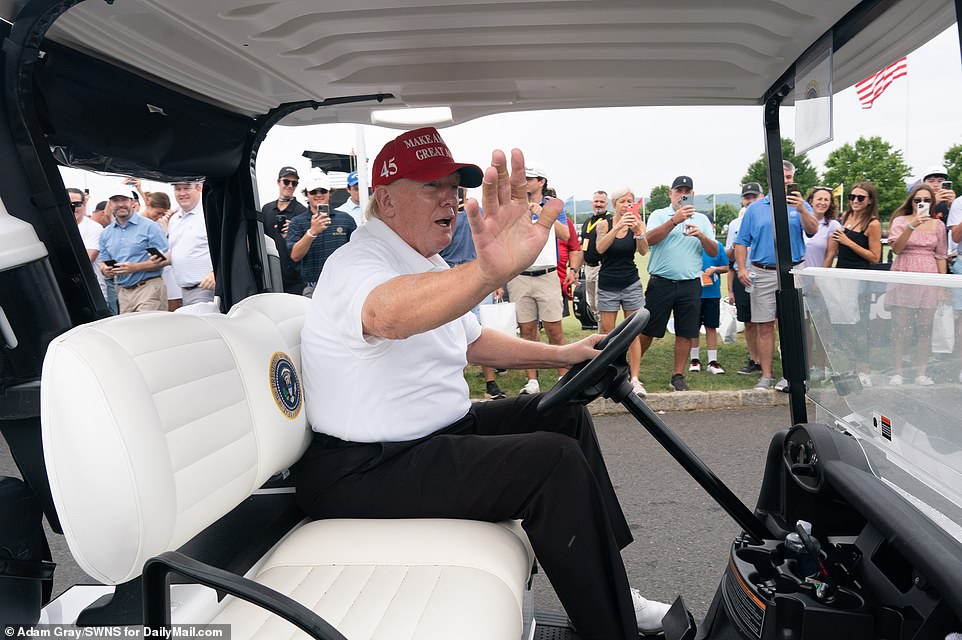 Despite their tears, the atmosphere at Bedminster was jovial. Trump was spotted driving around on a golf buggy, waving to his fans and cracking jokes with the pros taking part. 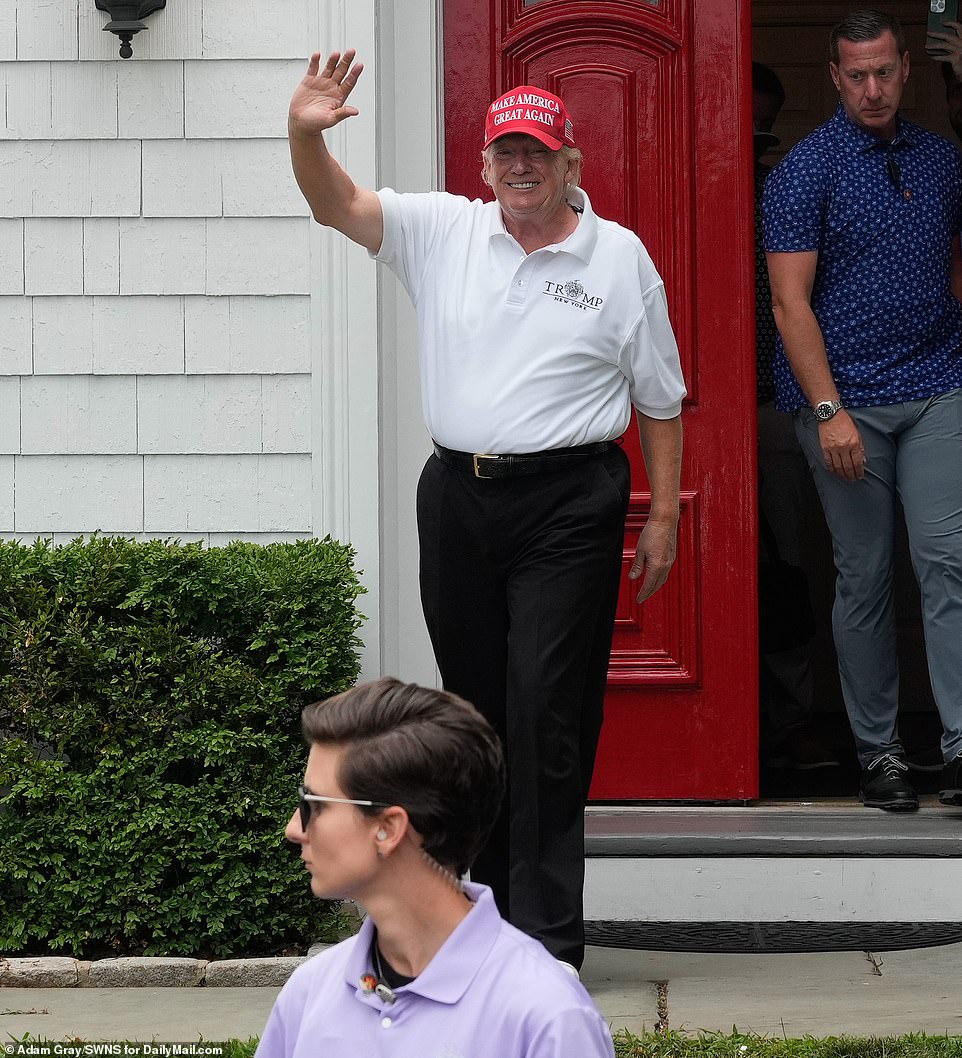 He played Saturday in the pro-am event but was playing host Sunday and for the rest of the weekend. 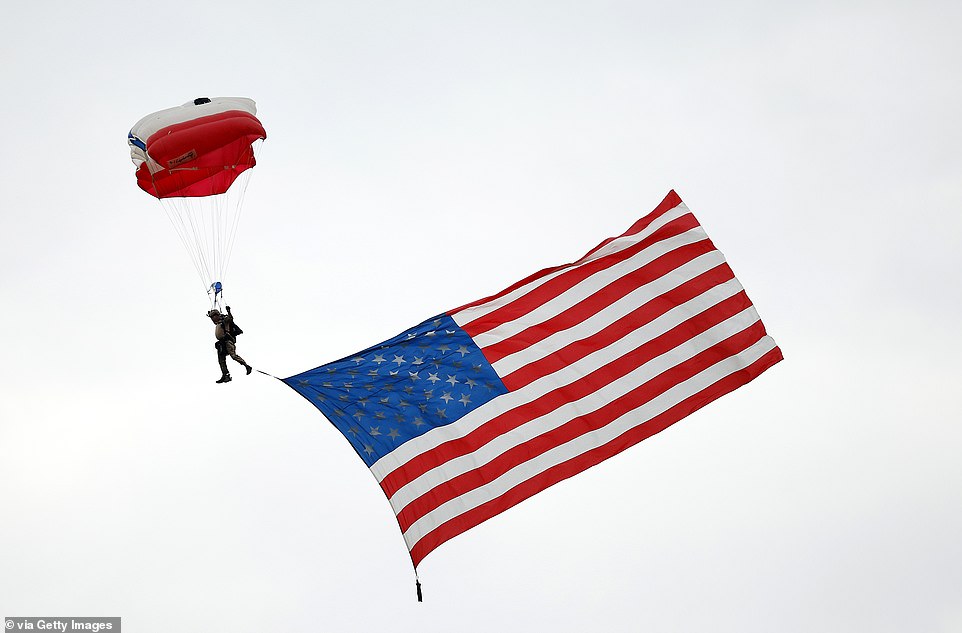 To delight his guests, Trump had arranged for a parachutist to descend from a small plane over the course at lunchtime. 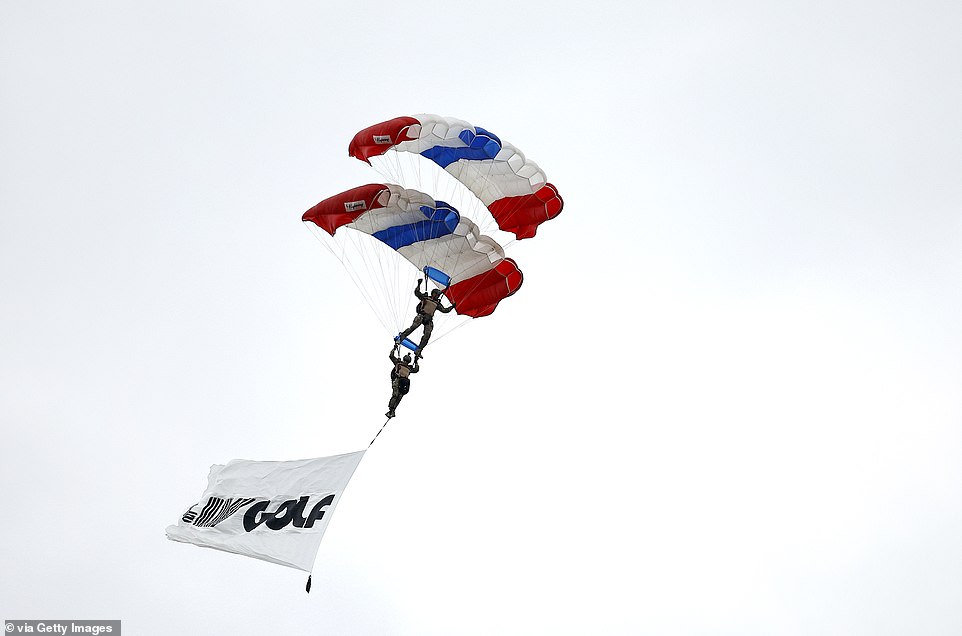 Trailing behind him were two flags – the American flag and another bearing the name LIV Golf. 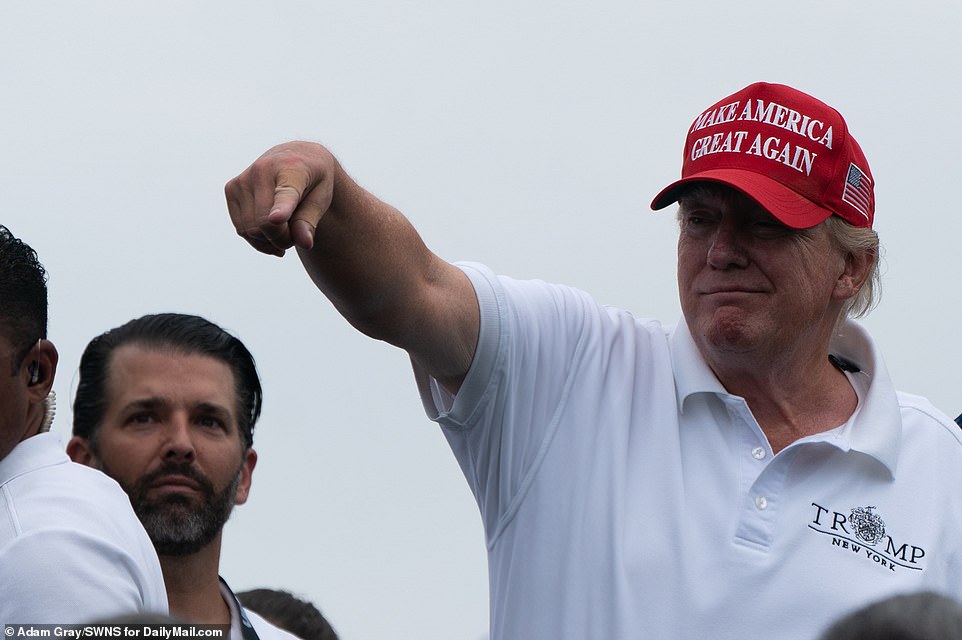 ‘The real attraction!’ one supporter shouted before Trump and his son, Donald Jr, made their way on to the first tee to cries of ‘Four more years!’ 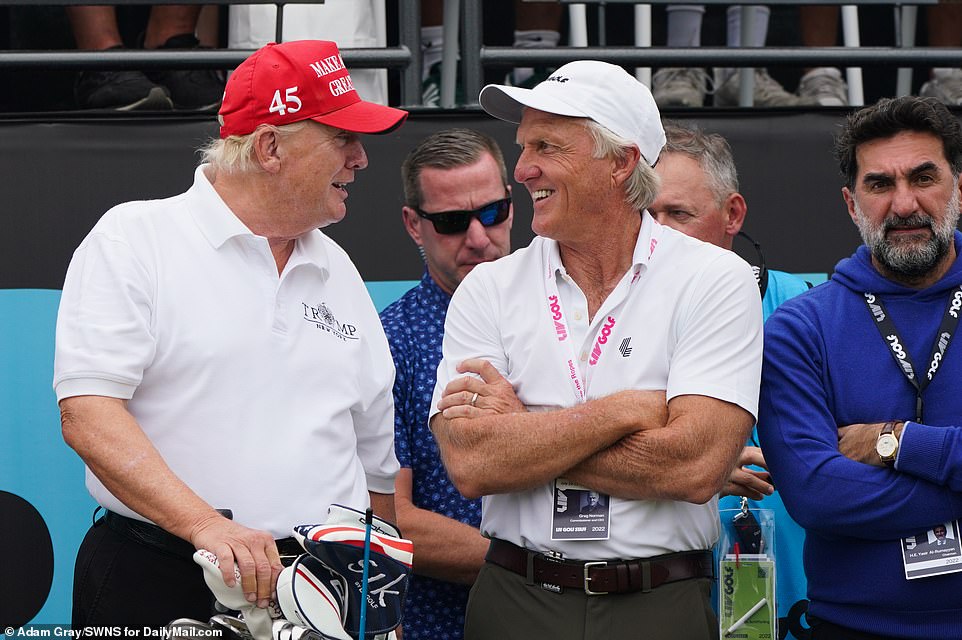 There, they stood in line, alongside LIV chief Greg Norman (pictured) and Yasir Al-Rumayyan, the governor of the Saudi Public Investment Fund behind this circus. It was a jarring, provocative image of golf’s new rebel alliance. 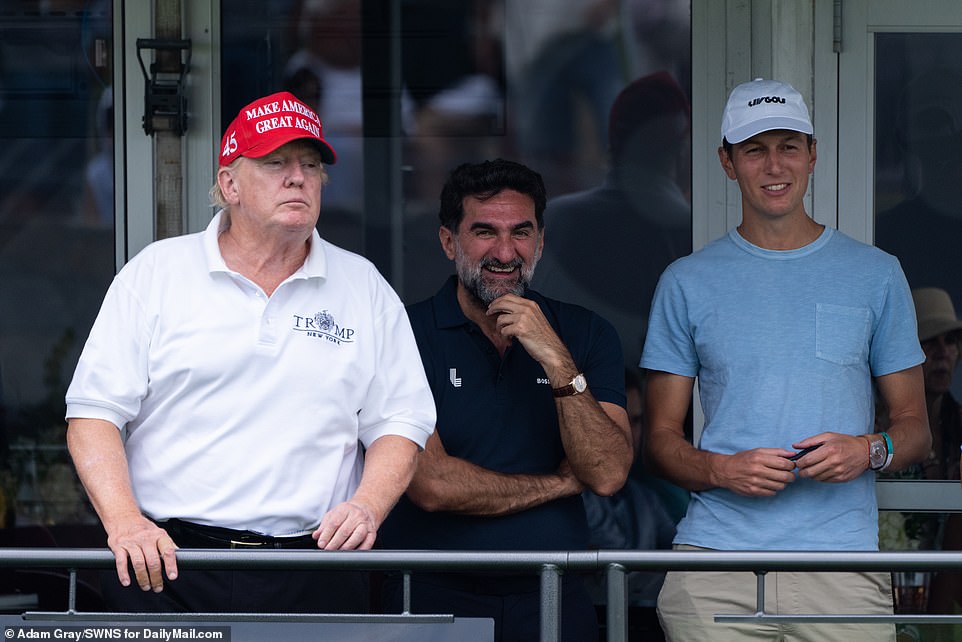 Trump was also seen with his son-in-law Jared Kushner, pictured in light blue, who is married to his daughter Ivanka. 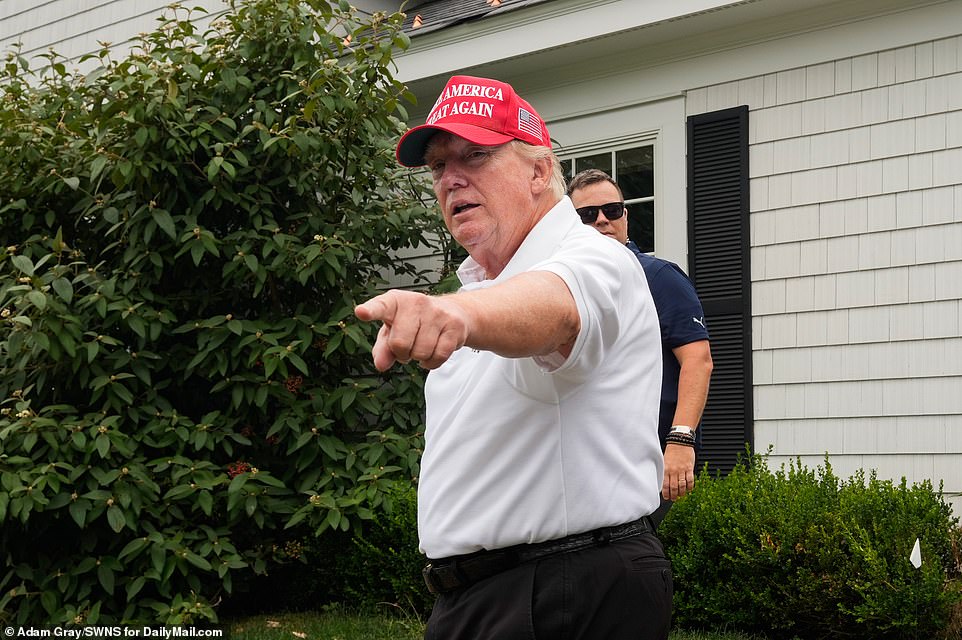 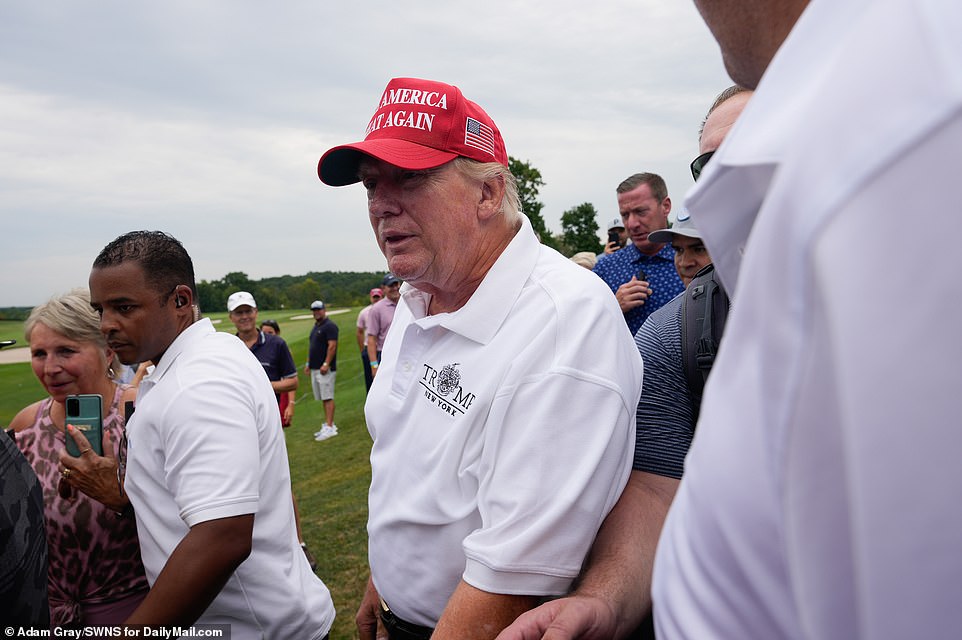 He continued: ‘The PGA was not loved by a lot of the players, for a long time. Now they have an alternative and nobody ever would have known it was going to be a gold rush, like this.’ 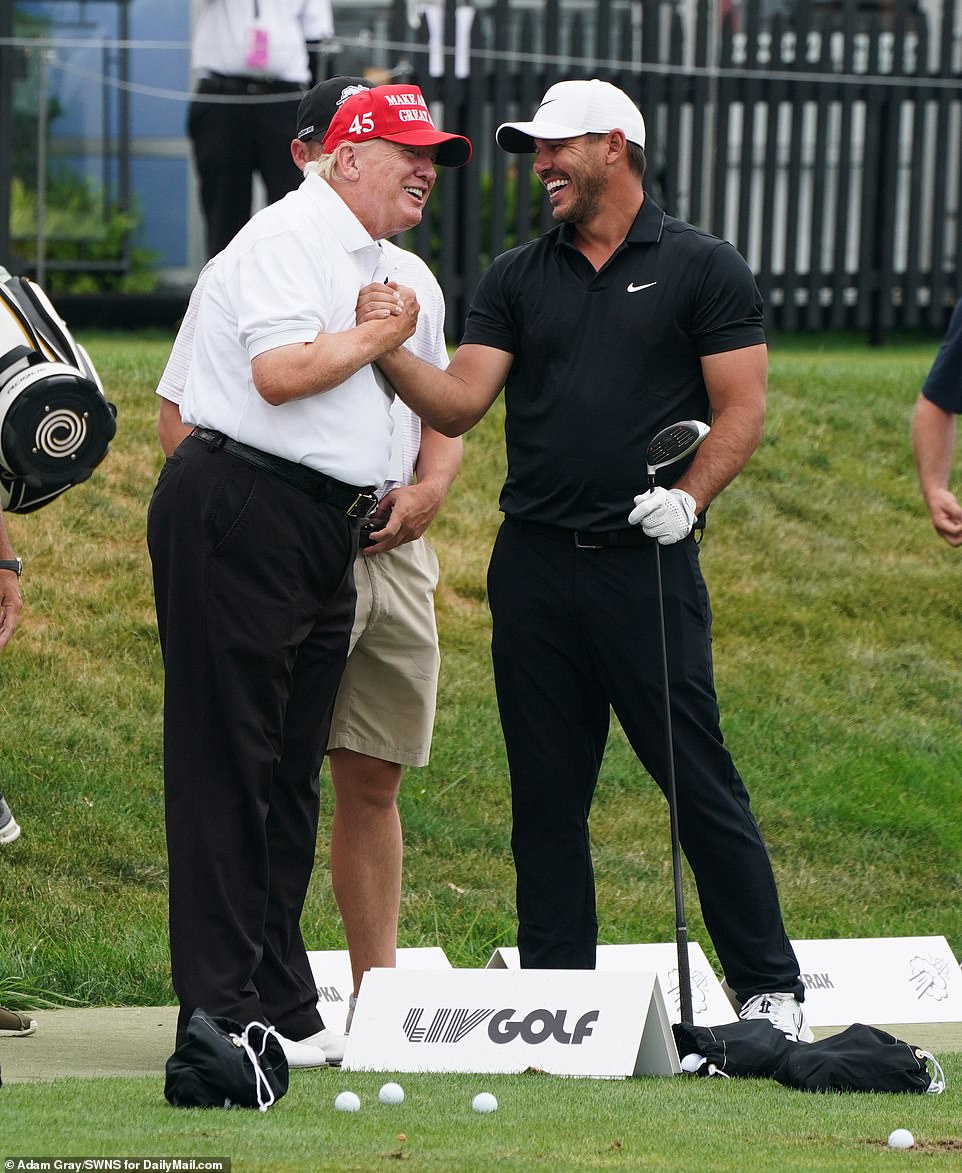 As for 9/11, he said: ‘Nobody’s gotten to the bottom of 9/11, unfortunately. And they should have. As to the maniacs that did that horrible thing to our city, to our country, to the world, so nobody’s really been there.’ 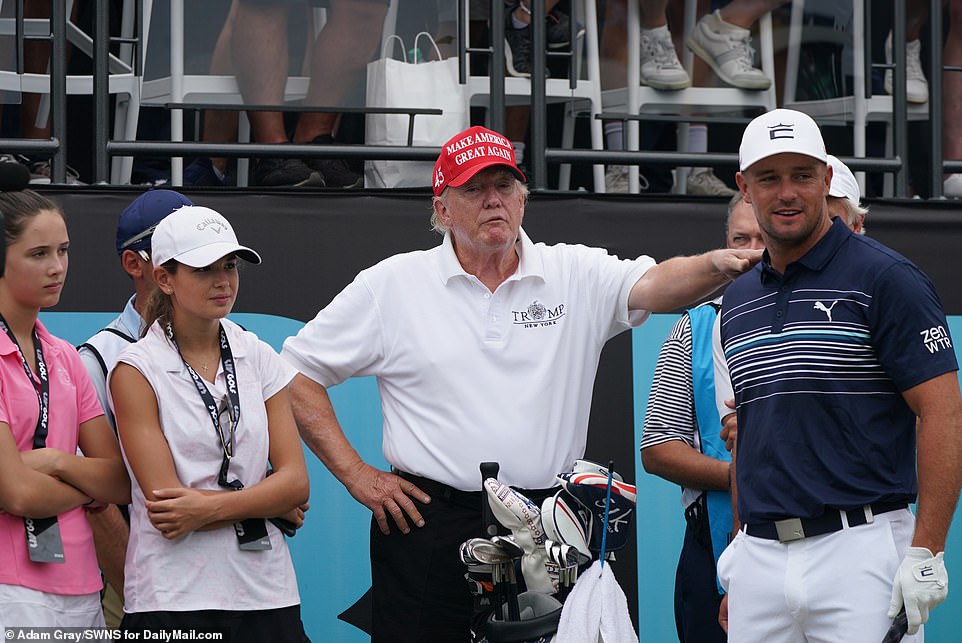 ‘You’re going to be so happy. We’ll let you know pretty soon,’ he said before asking where the reporter was from. ‘They just did a story on me, beautiful,’ he said. ‘The first one in five years. Front page, tell them I appreciate it.’