Public health bosses are desperately trying to track down 300 workers after 166 colleagues tested positive for Covid-19 at a food processing site that supplies Sainsbury’s and Asda.

More than 1,000 people work at Rowan Foods in Wrexham, which has seen an outbreak of coronavirus among staff, more than three months after a walkout over concerns there was a lack of protection for workers.

In a statement today, Public Health Wales said: ‘We are working with Betsi Cadwaladr University Health Board to urgently contact just over 300 workers that have not yet presented for testing.

Workers at Rowan Foods in Wrexham protested over a lack of proper protection amid the coronavirus lockdown in April. Now an outbreak has seen 166 workers diagnosed with Covid-19 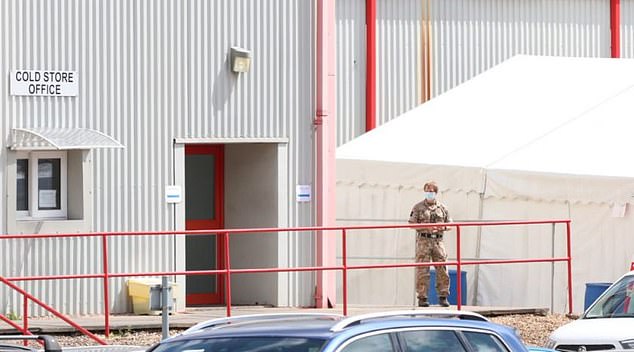 Military personnel have been sent out to the outbreak at Rowan Foods in Wrexham, North Wales 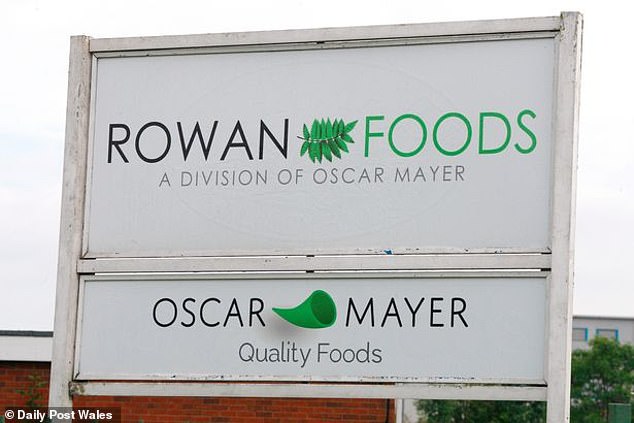 Nearly a third of Rowan Foods 1,000 staff have not been tested for Covid-19 after an outbreak

‘As we would expect with any focused track and trace process, we will identify additional asymptomatic cases. Finding these cases does not mean that the rate of infection in the Wrexham area is increasing as a whole.

‘There is no evidence that Rowan Foods is the source of the outbreak.

The multi-agency team managing the outbreak with Public Health Wales will continue to review the situation and work with the employer, their workforce and wider community to bring this outbreak to a swift conclusion.’

The Wrexham site first hit the headlines in relation to coronavirus earlier this year, when workers walked out in April in an apparent protest over what they felt was a lack of protection from the virus. 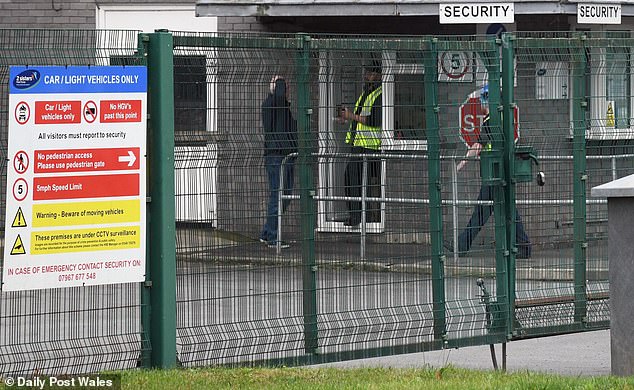 The 2 Sisters chicken factory in Anglesey, above, that supplies meat to KFC and M&S, has shut down for two weeks after 58 staff tested positive for coronavirus in a major outbreak 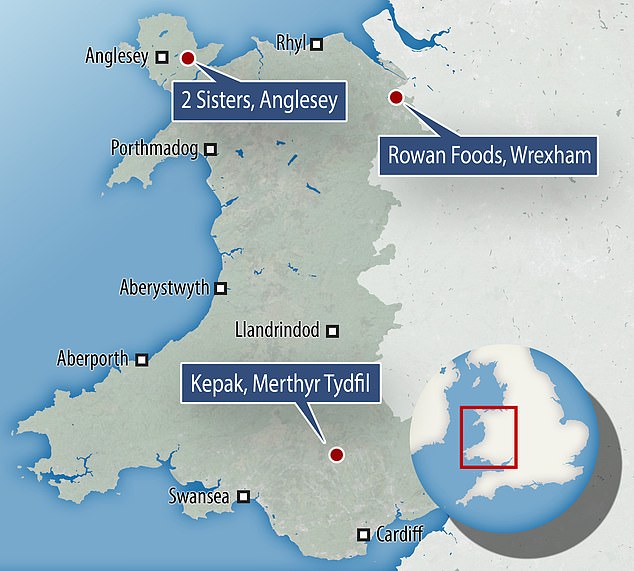 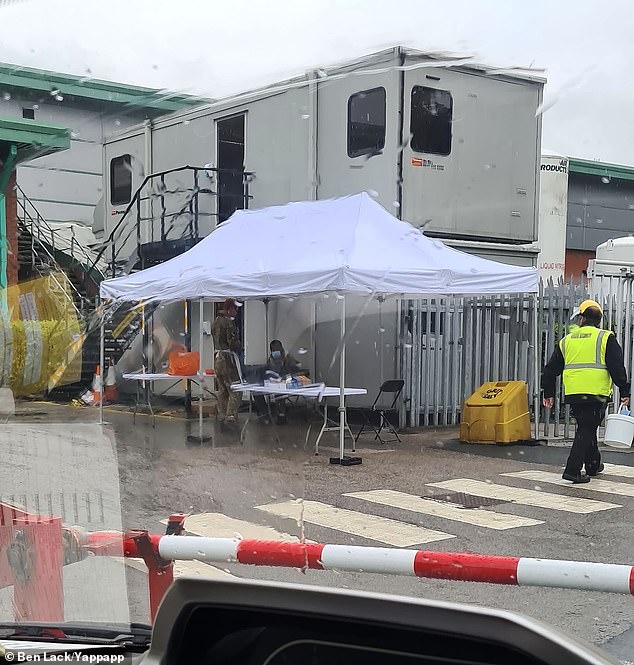 Covid-19 clusters at meat factories have been investigated

Number 10’s chief scientist Sir Patrick Vallance said last week: ‘The Food Standards Agency has looked carefully at whether meat is a vector for transmitting and the risk there is thought to be very low.

‘So the meat itself is not the issue but the environmental in which this takes place is. There are several features, perhaps, about meat-processing factories.

‘They’re cold and we know the virus prefers it in the cold, often difficult in keeping people separated so there’s that whole problem of proximity.’

He added: ‘They’re often loud so people are speaking quite loudly and there are places people huddles to go and have their coffees, and so on, so they infect each other.’

Unite claimed the company did not deal with health and safety concerns urgently, after negotiations over sick pay broke down.

Rowan Foods told the BBC:  ‘We have been proactively introducing new operational changes at the site for some months now, since the issuing of government guidance for the food industry in March 2020, to ensure that we maintain social distancing wherever practically possible, and have also included new mitigations such as screens and visors.’

The firm supplies major supermarkets including Sainsbury’s and Asda.

The Rowan Foods outbreak and the cluster of cases around the Anglesey 2 Sisters abattoir have so far accounted for more than 300 infections.

There have been claims that the island of Anglesey, home to 70,000 people, could be placed under lockdown to contain the outbreak at the 2 Sisters chicken factory.

Another 34 cases were reported at Kepak in Merthyr Tydfil.

Last Wednesday tinned food giant Princes was forced to close its Cambridgeshire factory for 24 hours following an outbreak of coronavirus among staff.

Staff from the Wisbech plant began displaying coronavirus symptoms and were instructed to self-isolate and contact health authorities to get tested.

Fourteen of the factory’s 407 employees tested positive, forcing the plant to close on Tuesday while deep cleaning was carried out. 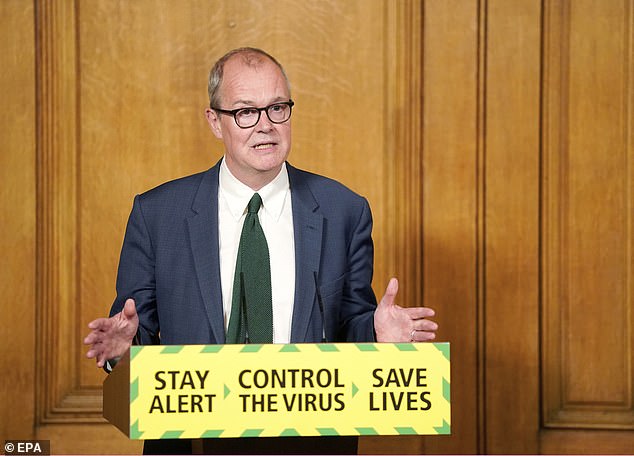 Cold air in slaughterhouses and meat-packing factories could be behind coronavirus outbreaks, suggesting winter could bring a second wave of Covid-19.

Scientists say cramped and poorly-ventilated working conditions in the factories — the centre of fresh outbreaks in the UK and Germany — could be to blame because they make social distancing difficult.

But experts also suggest the cold and sunless refrigerated buildings could allow the virus to spread and infect people faster than it would outside.

More than 1,000 workers at a meat-packing factory in north-western Germany were confirmed to have caught Covid-19 last week, and slaughterhouses and similar meat-processing facilities around the world have suffered major outbreaks of the virus.

One scientist said: ‘The perfect place to keep a virus alive for a long time is a cold place without sunlight.’

A company spokesperson said the 14 infected employees would be ‘logged as part of track and trace efforts’.

A spokesman for Asda, who own Kober Ltd, said today there shouldn’t be any food wastage as the goods ‘cannot be contaminated with the virus’.

Dismissing fears of contaminated meat in Thursday’s Downing Street press conference, he said: ‘The meat itself is not the issue but the environment in which this takes place is.’

Sir Patrick added that the virus ‘prefers’ cold places such as meat-processing plants, which are often chilled to preserve them.

He added it can be ‘difficult’ to keep workers separated in cramped factories and communal areas, and warned staff may have to speak loudly — which studies have suggested can spread the virus.

England’s chief medical officer Professor Chris Whitty said: ‘Meat-packing factories, abattoirs and food-processing and packing areas have led to several outbreaks around the world and, therefore, are an area where we’ll have to take the mitigation efforts particularly seriously.’

ARE MEAT AND FOOD FACTORIES HOTSPOTS FOR THE CORONAVIRUS?

As news has emerged of food factories around the world experiencing outbreaks of Covid-19, experts have suggested conditions inside the plants may be conducive to the spread of the virus.

Dr Simon Clarke, a cellular microbiologist at the University of Reading, told MailOnline that it was notable that food factories seemed to have been the centre of outbreaks more than other factories where people might be close together.

He said: ‘There are problems in this country, in Germany, in the United States. There is something common between them – it’s not happening in engineering or clothing factories where you also might expect people to be in close proximity to one another.

‘One assumes – but it’s just an idea – that the cold environment makes people more susceptible to the virus.

Dr Chris Smith, a virologist at the University of Cambridge, said on LBC ‘temperature is going to play a part’.

He explained: ‘When I’m breathing I’m blowing out droplets of moisture from my respiratory tract and the virus which is growing in there would be packaged up in the droplets.

‘Now the droplets will hover for a period of time in the air and then sink to the ground… and if it’s very dry, cold air – and cold air carries less moisture, remember – the droplets will stay smaller and stay airborne for longer.

‘If it’s very humid, moisture joins them, makes them bigger and heavier, and they fall and they drop out of circulation faster – so temperature could be a factor.’

Sunlight is also known to degrade viruses and make them less able to survive on surfaces that are exposed to UV light.

Rays of sunlight are thought to damage the genetic material inside the virus, making it less able to reproduce and killing it faster.

Professor Calum Semple, a disease outbreak expert at the University of Liverpool, told The Telegraph that cold, sunless food factories are ideal conditions.

He said: ‘If I wanted to preserve a virus I would put it in a cold, dark environment or a cool environment that doesn’t have any ultraviolet light – essentially a fridge or a meat processing facility…

‘The perfect place to keep a virus alive for a long time is a cold place without sunlight.’

But the temperature alone does not appear to be a controlling factor in coronavirus outbreaks.

Dr Michael Head, a global health researcher at the University of Southampton, said he thought close proximity was most likely to be behind the factory outbreaks.

He said: ‘Whilst refrigeration may be a contributory factor to the spread of the virus, the key factors are likely to be the number of people close together in indoor conditions.

‘Some of these factories have onsite or nearby accommodation where there are several people in each dormitory, they may be transported on a bus to the site of work, and they will be indoors together all day.

‘Levels of adherence to measures such as washing hands is uncertain and there is unlikely to be widespread use of PPE.’