The hunt for a missing woman has become a murder probe after three men were arrested over the disappearance of a 32-year-old.

The men, aged 22, 30 and 33, were arrested on suspicion of murder following a large police investigation in Exeter, Devon, yesterday.

Lorraine Cox was reported missing from the area last Thursday after being seen in the city centre in the early hours of August 31.

Friends and family put up missing posters throughout the city.

Lorraine Cox (pictured front), 32, was reported missing from the Exeter area last Thursday after being seen in the city centre in the early hours of August 31 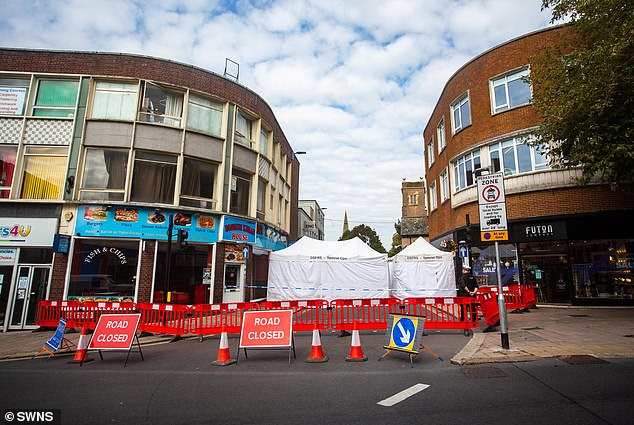 The three men, aged 22, 30 and 33, were arrested on suspicion of murder. Pictured: A number of Special Operations tents erected on Mary Arches Street in Exeter, Devon

The three men, all of whom live locally, remain in police custody following a huge operation which closed the city centre around Mary Arches Street.

Police have been carrying out extensive searches for Lorraine and warn that the public will see continuing activity in the next few days.

An appeal has been repeated for anybody with information or who saw Lorraine after August 31.

Lorraine, a Type 1 diabetic, disappeared suddenly, with her medical kit left at home.

Her family said: ‘Just want to know she is safe and well’.

Friend James Leo said: ‘Lorraine, this is totally out of character.

‘Insulin is the one most important drug to keep you alive. Just let someone know you are safe privately and confidentially.’

Detective Chief Inspector Lee Nattrass from the Major Crime Investigation Team said on Thursday: ‘Lorraine Cox had initially been treated as a missing person following concerns for her welfare from her friends and relatives. 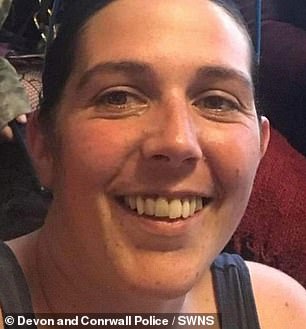 Lorraine (above), a Type 1 diabetic, disappeared with her medical kit left at home

‘However, following a significant development in the case, we are now treating this as a murder investigation.

‘Three men, aged 22, 30 and 33, all of whom live locally, have been arrested on suspicion of murder and remain in police custody.

‘Extensive searches by specialist officers are currently taking place in and around Mary Arches Street in Exeter City Centre.

‘A cordon remains in place and the public are likely to see police activity ongoing in the area for the next few days.

‘We would like to hear from anyone who believes they had seen or heard from Lorraine since 1 September as a matter of urgency.’

He added: ‘If you have any information that can assist us with our investigation, please contact the police on 999 quoting log 285 for 9 September.

‘The family of Ms Cox have been informed of this development and are being supported by trained liaison officers at this difficult time.

It comes as detectives investigating the murder believe Lorraine’s phone may have been used to cover the tracks of the suspects.

Friends and family also believe her phone may have been used by someone else after she disappeared, saying the text messages that were sent were ‘not like her’.

The social media of Lorraine Cox may also have been altered as Facebook stated she had moved to Plymouth, Devon, from her home 45 miles away in Exeter on September 2 – two days after she was last seen.