Hunt is on for Oakland’s serial cat shooter as $10,000 reward is offered for information

Hunt is on for Oakland’s serial cat shooter who has claimed four feline victims as $10,000 reward is offered for information

Someone has been picking off cats with a pellet gun in Oakland, California, and now local animal lovers are offering a $10,000 reward for information leading to the arrest of the serial feline shooter.

Oakland Animal Services announced the five-figure reward in a Facebook post on Monday, writing that the spate of attacks on cats over the past five weeks has left four felines seriously injured.

One of them – a brown tabby – had to be euthanized because of the extent of his injuries. 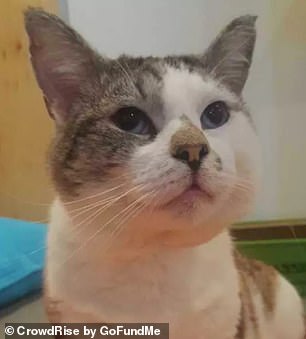 Targeted: These are two of the four cats that have been shot with a pellet gun in Oakland, California, over the past five weeks

‘No animal deserves to die as the victim of such a cowardly act of cruelty,’ stated the description of a Crowdrise fundraiser launched by the organization Friends of Oakland Animal Shelter, which is offering the $10,000 reward.

All the animals were shot with a pellet gun in a 2-mile radius of Oakland’s Lower Dimond neighborhood.

Oakland Animal Services was able to care for a seal point Siamese named Percy and a Siamese mix named Frankie.

A third cat, which was brought in over the weekend, is still recovering from a pellet wound in his elbow.

‘This horrific abuse is not only a threat to the cats of the Lower Dimond area. Serial animal abuse is a known precursor to violence against humans as well,’ the Friends of Oakland Animal Services’ post read.

The organization is appealing to the public for donations that would go towards the reward money. As of Tuesday afternoon, just under $600 has been raised.

If the reward is not paid out, the donations will pay for medical care and other services the shelter provides to stray animals.

‘Thank you for helping us seek justice for these cats, and making sure this serial shooter no longer terrorizes Oakland’s animals,’ the post concluded.

Anyone with information about the incidents is being asked to call Oakland Animal Services at 510-535-4895.