This distressing footage shows hunt saboteurs confronting two men who appear to have trapped a dog underground after sending it into a badger sett after a fox.

The video, filmed during the Eggesford Hunt in Devon last weekend, begins with members of the Devon County Hunt Saboteurs spotting huntsmen, hounds and ‘terrier men’ milling around the area.

They find one pair of ‘terrier men’ next to a badger sett entrance which has been blocked off.

The video, filmed during the Eggesford Hunt in Devon last weekend, begins with members of the Devon County Hunt Saboteurs spotting huntsmen, hounds and ‘terrier men’ milling around the area.  Two of the terrier men (above) were seen standing by a blocked-off badger sett 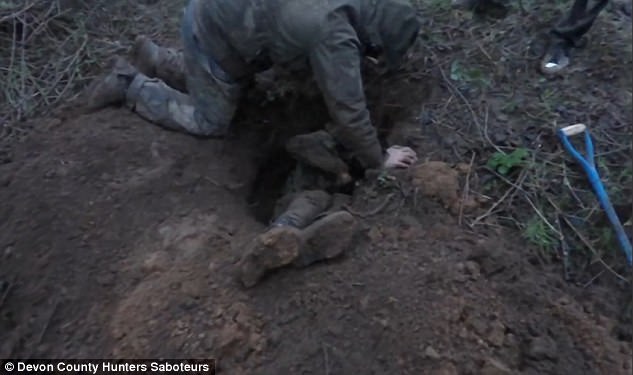 It is clear from a terrier tracking device that there is a dog inside the hole. After talking to the saboteurs, the terrier men eventually decide to unblock the hole to ‘rescue’ their dog – but struggle as the terrier has latched itself onto a fox

However, the men insist they have done nothing illegal, do not intend to kill the fox and just want to ‘rescue their dog’, according to Devon Live.

Traditionally, terrier men are employed by huntsmen to block up badger setts and fox earths before the start of a hunt to prevent foxes from going to ground.

Any foxes which have gone to ground are located using the dogs and are then dug out and shot. Alternatively, the fox would be released to be hunted again by the hounds.

In the clip, the saboteurs approach the two men – dressed in army fatigues as they stand by the entrance to the sett with shovels – and tell them: ‘This is a badger sett and you’re breaking the law. You’ve got a terrier down there.’ 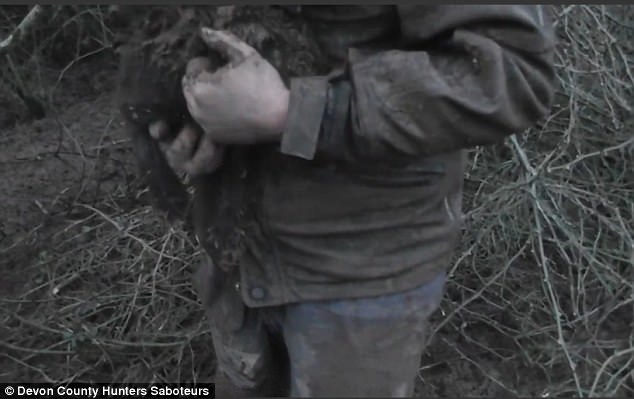 The dog is retrieved but has injuries to its face and shoulders, according to the saboteurs. The fox is believed to have escaped later that evening

What are ‘terrier men’ – and what role do they play in fox-hunting?

Traditionally, terrier men would be employed by huntsmen to block up badger setts and fox earths before the start of a hunt to prevent foxes from going to ground.

Any foxes which have indeed gone to ground are located using terriers and are then dug out and shot.

Alternatively, the fox would be ‘bagged’ – or kept in the hole – to be released and hunted at a later date by the hounds.

Nowadays, hunts like to refer to terrier men as ‘countrymen’, who are supposedly employed to open and close gates, repair fences and lay trails.

Terrier men would have at least one terrier with them as well as equipment such as spades, nets and terrier-locating devices.

They normally follow the hunt on quad bikes but also in 4x4s or on foot depending on the terrain.

At this point, the beeps of a tracking device can be heard, which tells the men where their terrier is – namely, underground.

A female saboteur then makes radio contact with a colleague, saying: ‘Terrier is in the badger sett. They’ve blocked holes. We need police here now. Loads of holes have been filled in.’

The terrier men start unblocking the sett – but have difficulty removing the dog as it has latched itself onto a fox.

Eventually, the men pull out the distressed terrier, which the saboteurs said had injuries to its face and shoulders.

The fox escaped later that evening, once the terrier men had gone.

According to the Devon County Hunt Saboteurs Facebook page, the two terrier men had travelled down from Yorkshire.

Explaining their actions to the saboteurs, one of the men said: ‘Cos we’re born into it.’

They also claimed that they were ‘trail hunting’ – a legal form of hunting which sees dogs follow a pre-laid scent trail and doesn’t involve the chasing or killing of foxes or any other live quarry.

The saboteurs have shared their footage with Devon & Cornwall Police.

A police spokesman told MailOnline: ‘We have been made aware of an incident that took place near Eggesford on Saturday, January 20. We are working with those who were in attendance to gather video and still images as evidence.’ 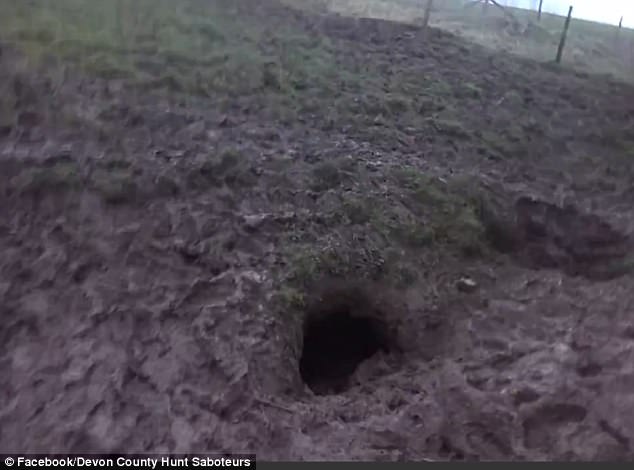 Traditionally, terrier men are employed by huntsmen to block up badger setts and fox earths before the start of a hunt to prevent foxes from going to ground

According to the website of the Masters of Foxhounds Association, Eggesford Hunt operates in around 400 square miles of Mid Devon, where records date back to 1858 when the land was hunted by Lord Portsmouth.

Using dogs to hunt foxes was banned by the Government in 2004 under the Hunting Act.

But there are dozens of hunt saboteur groups nationwide who claim hunters regularly flout the law and kill foxes.

What are the rules for hunting with dogs in the UK? How fox hunters try to avoid run-ins with the law

Hunting with dogs was banned in England & Wales in 2004 (Scotland in 2002) because of the profound suffering it causes to foxes and other hunted animals, such as stags and hare.

The law was not intended to stop foxes being killed, but to stop them being cruelly killed.

Stalking and flushing to guns: Two dogs may be used to flush a fox from cover so it can be shot for the purpose of protecting livestock, game birds or biodiversity. The dogs must be kept under close control and the fox must be shot as soon as it breaks from cover – no further chasing is allowed.

Rescue of an injured mammal: Two dogs may be used to capture a fox if the hunt believes it is injured and the hunting is undertaken to relieve its suffering.

Research and observation: Two dogs are allowed to be used for the purpose of or in connection with the observation or study of a wild mammal.

Recapture of escaped wild mammal: An unlimited number of dogs can be used to capture a fox that has escaped from captivity.

Use of a dog below ground (known as terrier work): One terrier may be used below ground to flush out a fox to be shot for the purpose of protecting game birds being reared for shooting. The terrier men must carry written permission from the landowner.

Fox hunters have long tried to find ways to avoid the law. When the Hunting Act was introduced many hunts quickly took raptors out with them so they could claim to be using the bird of prey exemption.

However, few hunts claim to be using this exemption today. Equally, some hunts went out with just two hounds and claimed to be flushing to guns, but this too quickly stopped.

Today, most fox hunts say they have switched to ‘trail hunting’, where the dogs follow a pre-laid scent trail made using fox urine and does not involve a fox being chased or killed.