Hurricane Fiona is expected to batter Canada’s eastern coast early Saturday, and has been upgraded to a Category 4 storm as Canadians stock up on food and barricade their homes in preparation.

The hurricane is expected to touch down in Canada’s Nova Scotia, and also effect Prince Edward Island as well as Newfoundland.

It will bring wind speeds of up to 130 mph, relentless rain and a strong likelihood of flooding.

The Canadian Hurricane Center has estimated the storm surges could be as deep as 6-8 feet and coastal waves as high as 40 feet in some areas, as Canadians brace for a storm stronger than any they’ve seen in 50 years.

Canada’s government warns rain could exceed seven inches in areas of Fiona’s track and warned that ‘road washouts are possible’. They say residents should have enough supplies at home for 72 hours.

Empty shelves are seen in a grocery store as shoppers stock up on food in advance of Hurricane Fiona in Halifax, Canada 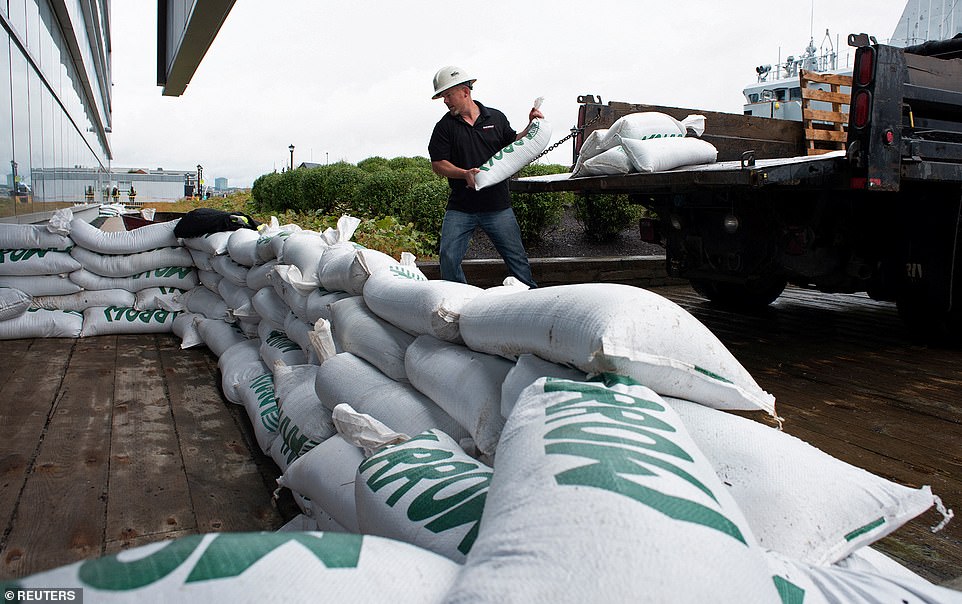 A worker places sandbags around the doors of the Nova Scotia Power building before the arrival of the hurricane, which is expected to cause coastal waves as high as 40 feet 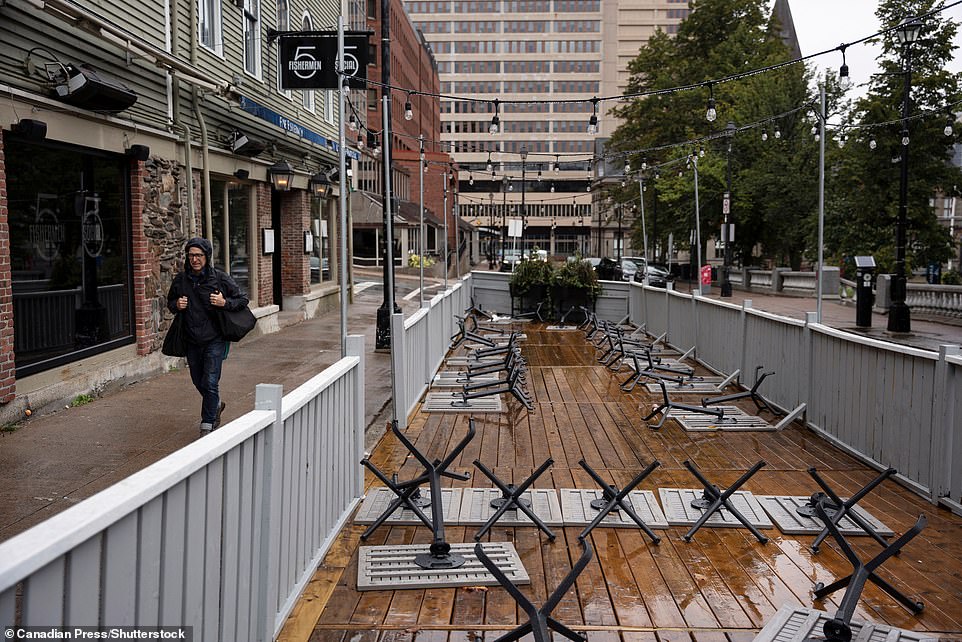 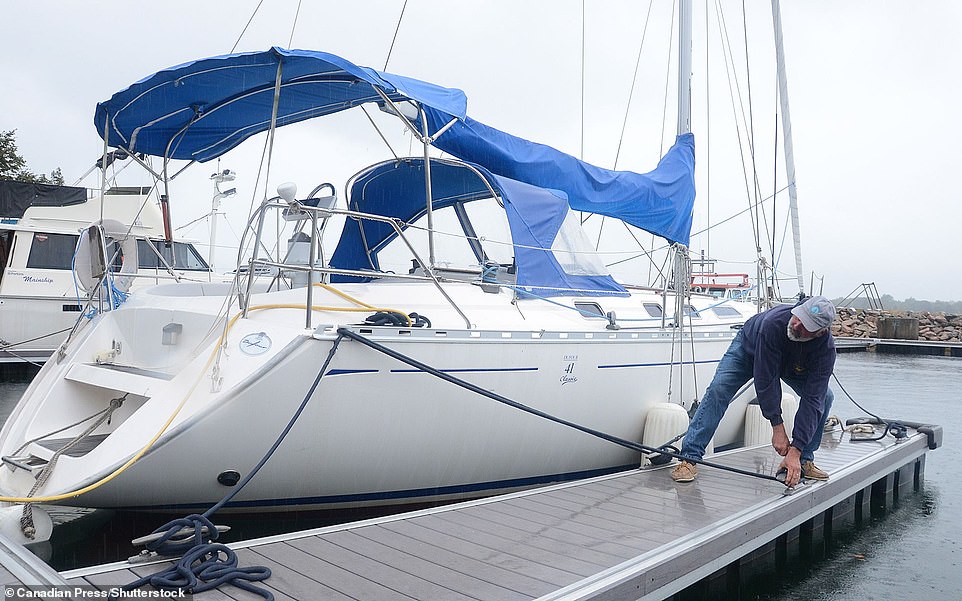 A Canadian double checks the lines of his sailboat moored in Nova Scotia as officials warn there may be storm surges as deep as eight feet, threatening to cause widespread power outages 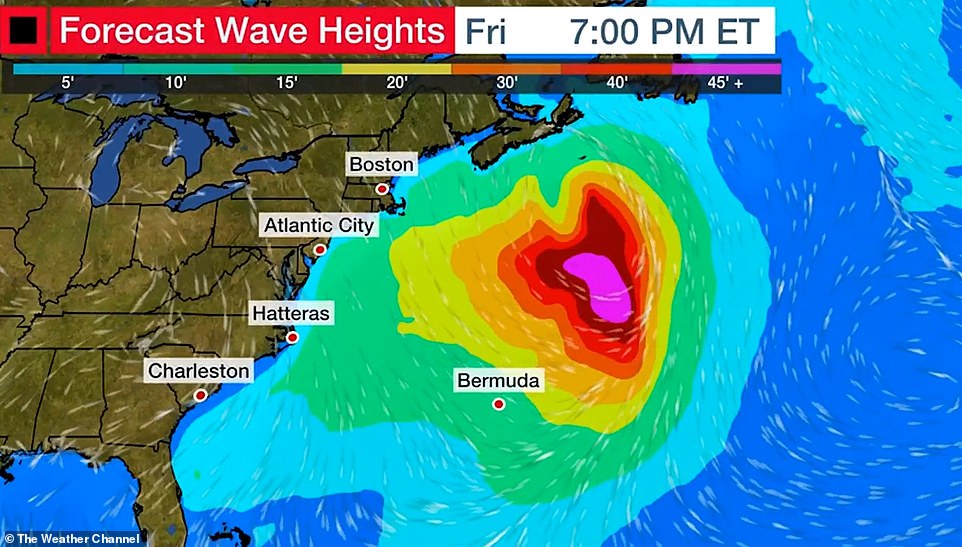 A map of Hurricane Fiona at 3:30 p.m. on Friday shows the historic storm closing in on Canadian mainland

‘All the ingredients are really there for some high water levels, flooding and potential damage,’ said meteorologist Rob Carroll, who added the storm surges will likely be the most damaging part of the storm.

According to the most recent update from the Canadian Hurricane Center at 1 p.m. EST, the storm’s center was about 475 miles south of Halifax, Nova Scotia’s most populous city, and was moving northeast.

Chris Fogarty, manager of the Canadian Hurricane Center, told CNN Fiona has the potential to be ‘a landmark event for Canada in terms of intensity of a tropical cyclone.’

Extensive power outages may occur in Nova Scotia from the storm as they already have in Puerto Rico, and John Lohr of the Emergency Management Office of Nova Scotia said.

‘Impacts are projected to be felt across the province. Every Nova Scotian should be preparing today,’ he added.

Utility company Nova Scotia Power created an Emergency Operations Center, which will act as a base of operations for the company to work on restoring power as quickly as possible.

Canadians have been sharing ways to prepare for the effects of the storm including keeping ice in the house to keep food cold in case of a power outage and having extra batteries on hand. 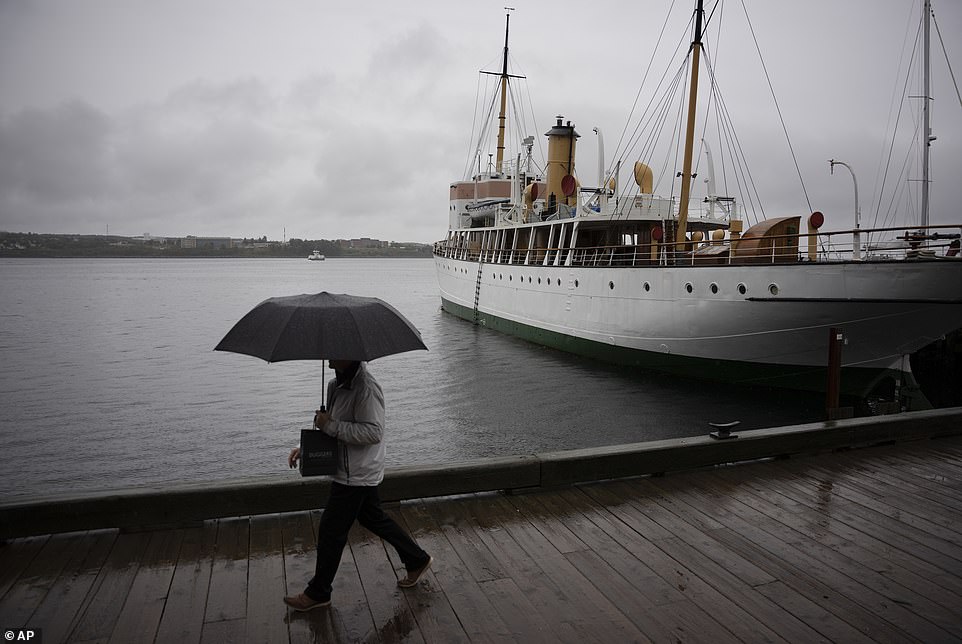 ‘Every Nova Scotian should be preparing today,’ John Lohr of the Emergency Management Office of Nova Scotia said 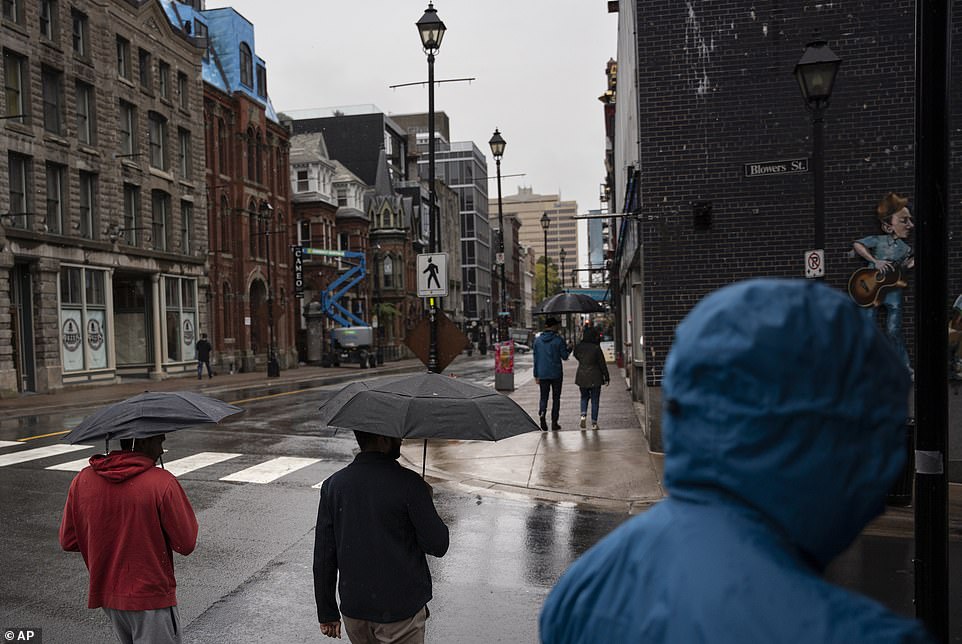 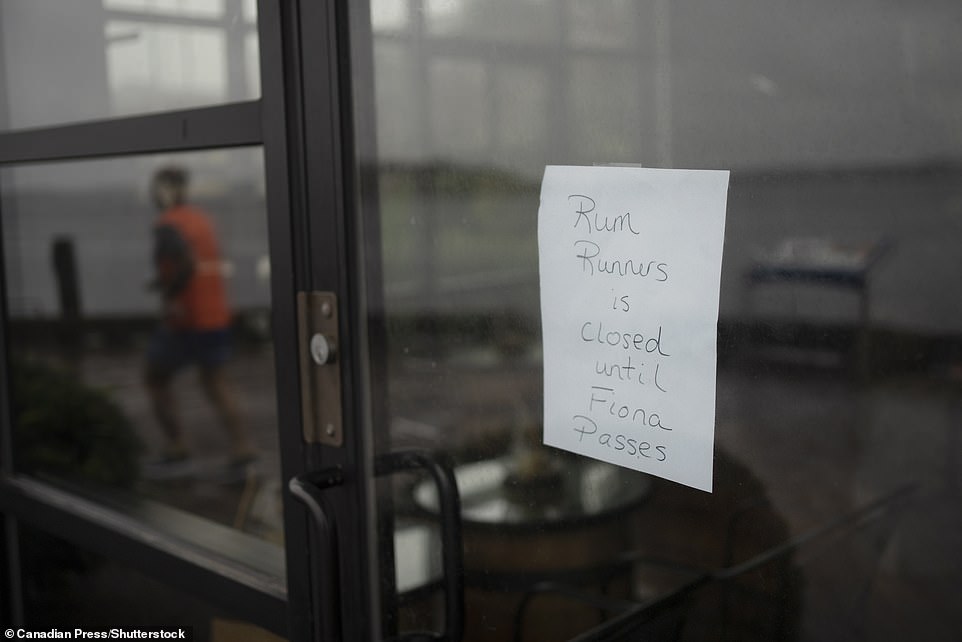 Immediate efforts should be taken to protect belongings. Avoid shorelines, waves are extremely dangerous. Residents in those regions should be prepared to move out if needed,’ read an emergency alert sent by officials in Prince Edward Island.

While Fiona is expected to weaken slightly before hitting mainland Canada, meteorologists warn it won’t be a significant slow and to keep treating the storm seriously.

‘All that momentum is trapped within the storm, so it’s very difficult for something like that to actually wind down,’ Canadian Hurricane Centre meteorologist Bob Robichaud said.

‘It’s a major hurricane, and it’s only 900 kilometers away from us, and it’s getting bigger,’ he added.

‘We have been through these types of events before, but my fear is, not to this extent,’ Amanda McDougall, mayor of Cape Breton Regional Municipality said.

Hurricanes in Canada are somewhat rare, in part because once the storms reach colder waters, they lose their main source of energy.

The storm has so far killed five people – two in Puerto Rico, two in the Dominican Republic and one in the French island of Guadeloupe.

Fiona then made its way to Bermuda where residents were seen boarding up windows and taking shelter before the hurricane’s arrival.

Fiona hit the island on Thursday as a Category 4 storm, but despite being downgraded, the hurricane continues to threaten the Caribbean islands as it heads to Canada. 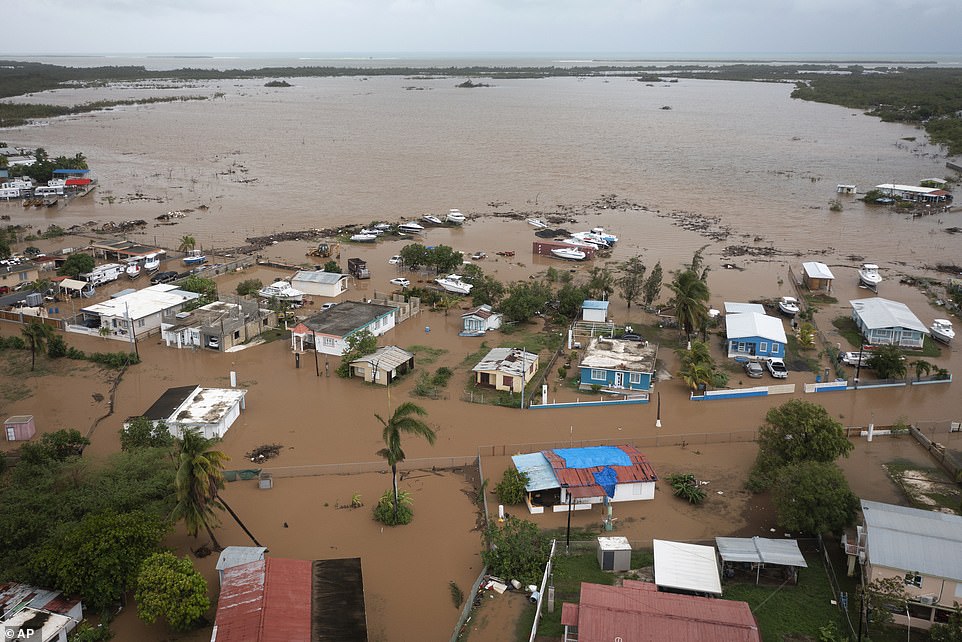 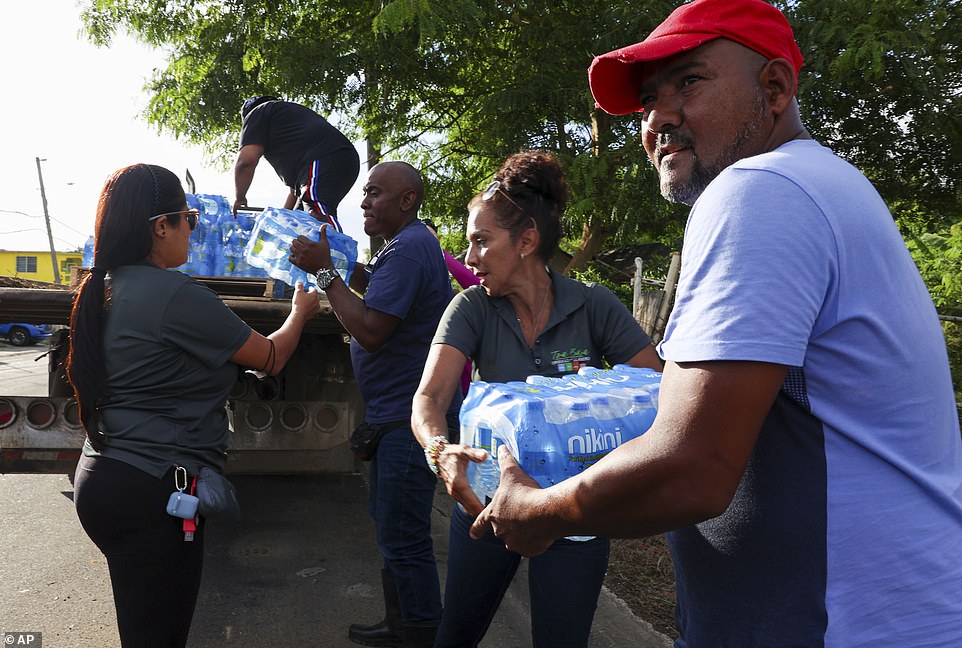 Before reaching Bermuda, Fiona caused severe flooding and devastation in Puerto Rico, leading President Joe Biden to say Thursday that the full force of the federal government is ready to help the United States territory recover.

Speaking at a briefing with Federal Emergency Management Agency officials in New York, Biden said, ‘We’re all in this together.’

The president noted that hundreds of FEMA and other federal officials are already on the ground in Puerto Rico, where Fiona caused an island-wide blackout.

As of Thursday, more than one million homes and businesses were still without power, and more than 450,000 people remained without water service.

Fortunately, the pace to restore power to homes is faster than efforts performed after Hurricane Maria hit in 2017 when all 1.5 million homes were without power for a week. 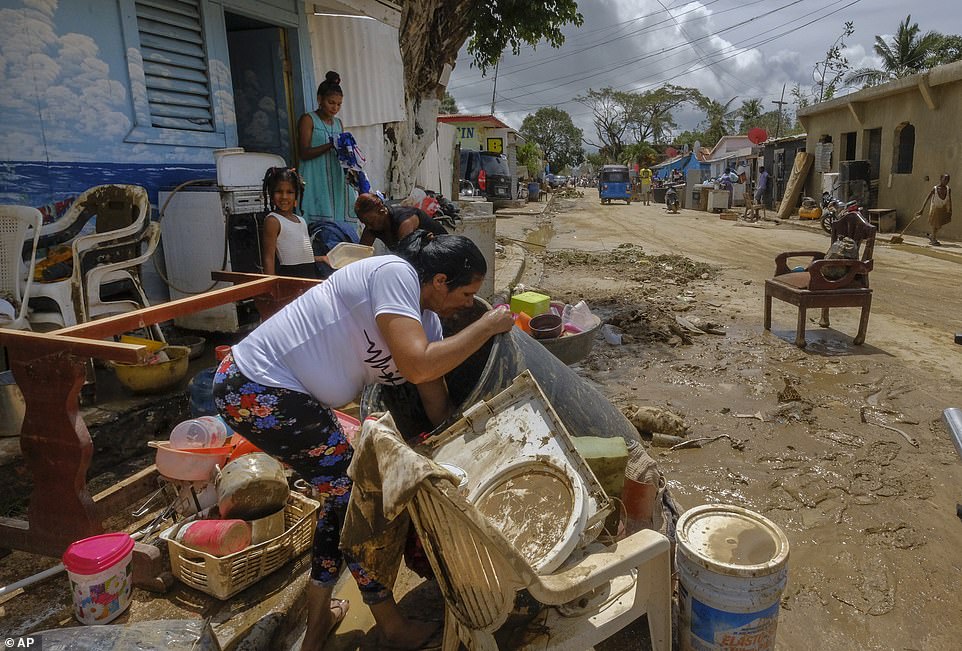 Residents are seen here working to recover belongings from flooding caused by Hurricane Fiona in the Los Sotos neighborhood of Higuey, Dominican Republic on Tuesday 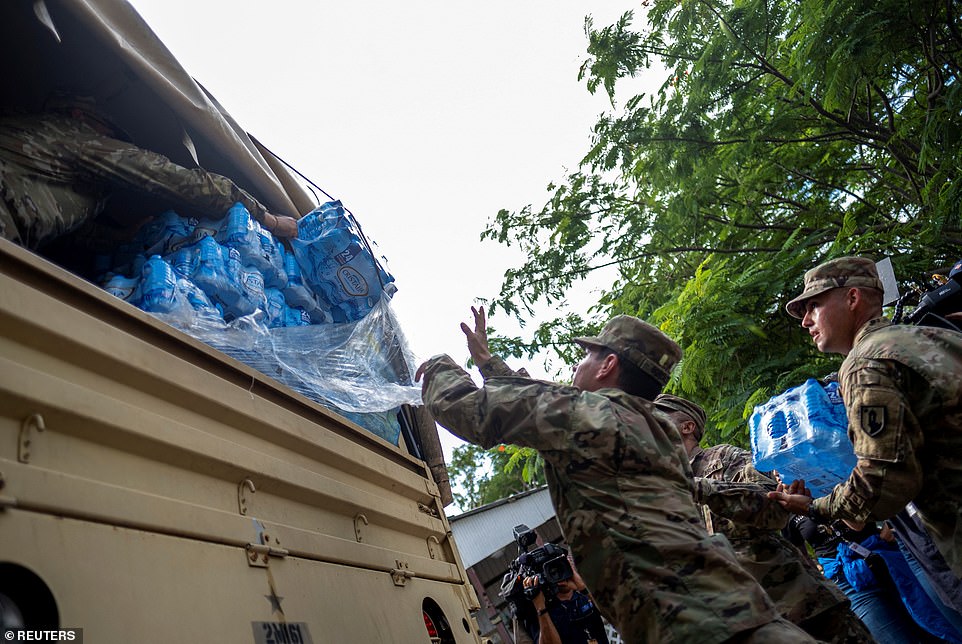 Members of the Puerto Rico National Guard distribute water in an affected community in the aftermath of Hurricane Fiona in Ponce, Puerto Rico 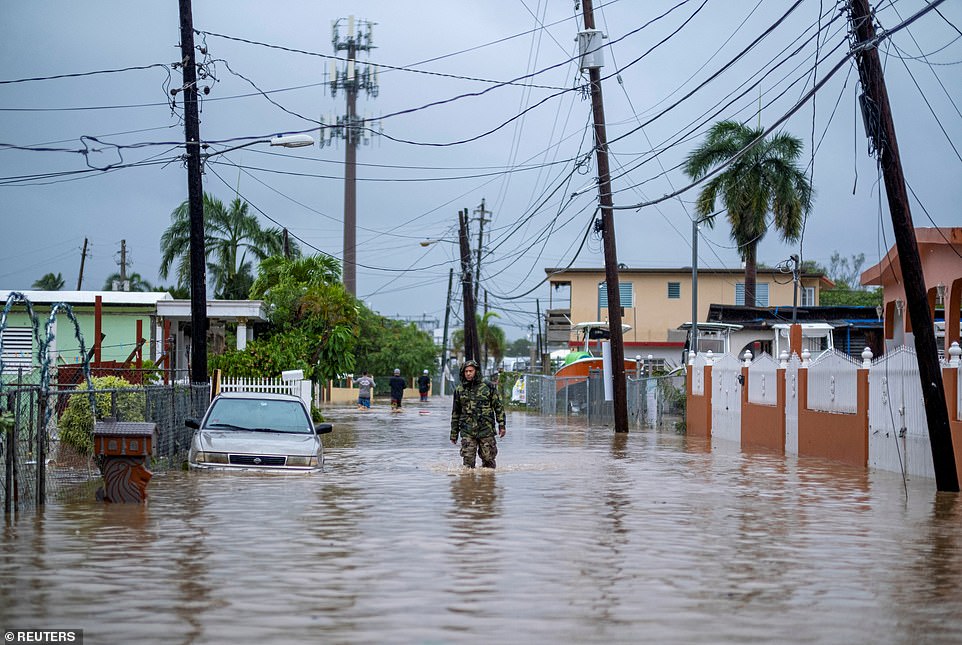 Meteorologists expect a tropical wave, which began to form Wednesday, ‘is the most significant threat for the US mainland we’ve had this hurricane season.’ A member of the Puerto Rico National Guard is seen wading through the flooded streets

In the Dominican Republic, meanwhile, more than a million people are without running water while just under 350,000 homes and businesses were without power as of Wednesday.

Maj. Gen. Juan Méndez García, director of the DR’s emergency operations center, told CNN that more than 600 homes had been destroyed while some communities are without access to aid.

President Biden announced Wednesday the approval of a major disaster declaration for the territory which will allow Puerto Ricans access to grants for temporary housing and home repairs in addition to low-interest loans to cover property losses.

‘This ensures that our people will have access to additional help from FEMA to recover from the damage caused by this event,’ Puerto Rico Gov. Pedro Pierluisi tweeted.