A healthcare clinic in Texas is offering free abortion services to women impacted by Hurricane Harvey.

More than 74 women have already taken up the offer, according to Whole Woman’s Health, which promised to offer transportation and accommodation, as well as the procedure, to women affected by the hurricane that flooded southeastern Texas.

Pro-life organizations such as Texas Right for Life hit back at the offer saying it was ‘heinous’ and would take an emotional toll on the women.

On average, a surgical abortion in the first trimester costs $550 in Texas, according to Whole Woman’s Health.

Texas remains a battleground in the United States for the abortion debate on where the line should be drawn for the controversial procedure.

In response to Hurricane Harvey, Whole Woman’s Health, which owns health clinics in Texas, offered women affected by the natural disaster free abortions for the month of September. They have given the procedure to more than 74 women (file photo)

Whole Woman’s Health is a reproductive clinic organization that offers services including abortions for women across Texas.

The organization posted on Facebook on September 1st that it would be offering free abortions for women in areas that were affected by Hurricane Harvey.

The organization sued Texas for its new law on second trimester abortions.

Senate Bill 8 stated that on September 1 physicians would no longer be able to perform second trimester abortions.

Whole Woman’s health sued the state after it signed off of Senate Bill 8 in July.

The organization will head to court on November 2 to argue why second trimester abortions should be allowed.

This is the third lawsuit the state is facing this year about woman’s health.

In January, a judge ruled that healthcare providers didn’t have to cremate or bury the remains of a fetus after an abortion.

And in February, the same judge ruled that the state couldn’t prevent Planned Parenthood from being covered on Medicaid.

They said natural disasters prevent women from being able to get these procedures and afford them.

Abortions on average cost between $400 to $1,500 for the surgical procedure depending on the state.

It is cheaper for a woman to do it by taking an abortion pill up to 10 weeks into the pregnancy. The pill costs between $400 to $800 depending on the state.

‘The promotion of this heinous no-cost service is riddled with fallacies because abortion is never free,’ said Melissa Conway, director of external relations for Texas Right to Life, to Baptist Press.

‘There is always a cost to abortion. Women are not free from the emotional toll that ensues after abortion and the child is certainly not free to live another day.’

Whole Woman’s Health has given the procedure for free to more than 74 women in Texas with the help of The Lilith Fund.

If a woman doesn’t qualify for the fund, the organization will help them regardless to get the abortion.

It has also been collecting money from its Stigma Relief Fund to pay for the abortions.

Already, more than $15,000 has been raised to go towards travel and coverage of the procedure.

‘Texas doesn’t have a safety net, so we have to help people raise money for services,’ said Amy Hagstrom Miller, CEO of Whole Woman’s Health, to The Dallas Morning News. 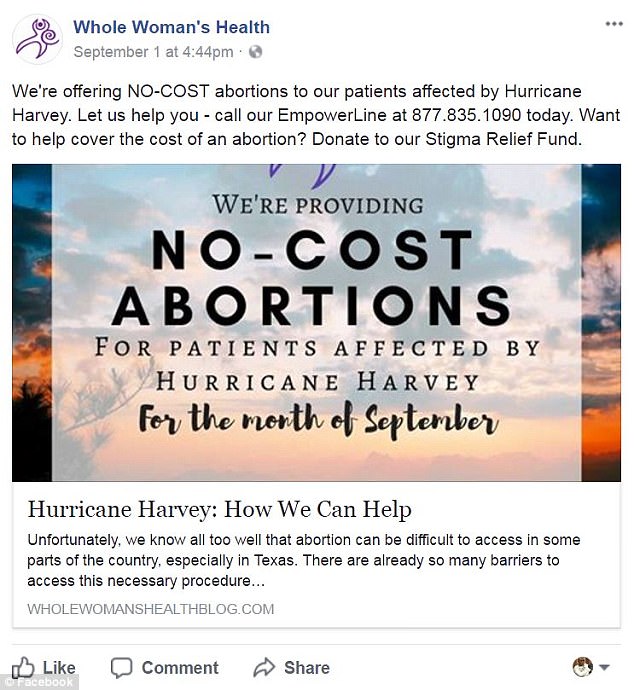 Whole Women’s Health let people know through Facebook that they would be offering free abortions for women. The organization has raised more than $15,000 to fund the procedures 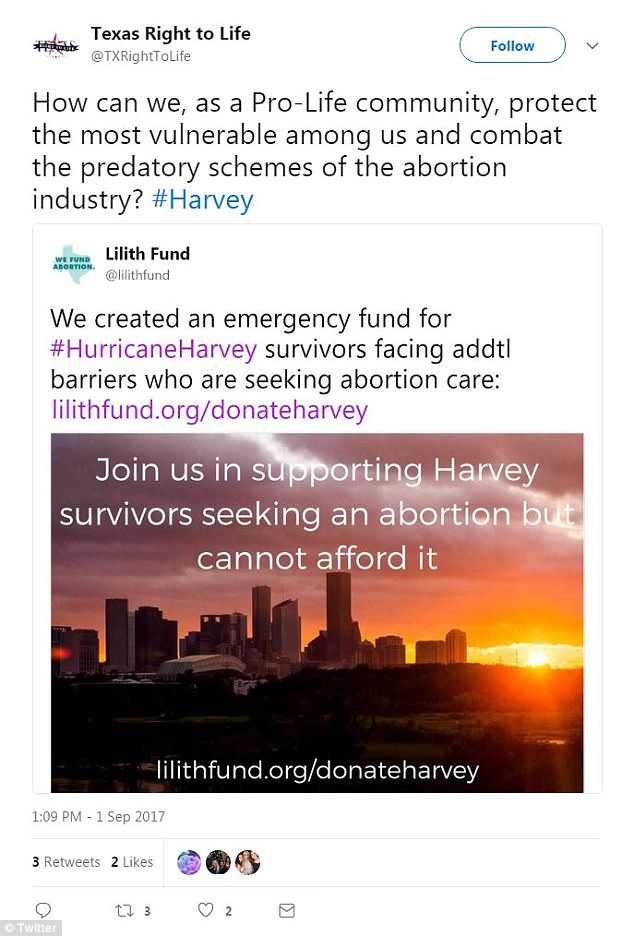 Texas Right to Life, a pro-life organization, instantly responded to the funds to help women receive these free procedures. The organization said the offer was ‘heinous’

‘Many of these women are traveling for two days and need support for travel and child care.’

In 2013, Texas House Bill 2 put stricter regulations on abortion clinics that forced closure of more than 75 percent across the state.

Currently, only 19 clinics remain that provide abortion services for women.

Now the state is battling with clinics on whether it will allow physicians to perform second trimester abortions.