The confirmed death toll of Hurricane Ian has risen to 52, with the majority concentrated in a Florida county that is facing criticism for delaying its evacuation warning.

In Lee County, home to Fort Myers and epicenter of the hurricane’s devastation on Florida’s Gulf Coast, there were 35 deaths after county officials waited a day longer than other nearby areas to issue evacuation orders.

Lee County did not issue a mandatory evacuation until Tuesday morning, just over 24 hours before the storm made landfall, with officials there telling the New York Times that they postponed the order due to earlier forecasts that showed the storm heading further north.

Lee County Sheriff Carmine Marceno confirmed the latest casualty report on Saturday, saying that search and rescue operations are still taking place throughout the county and the rest of the Sunshine state following Ian’s devastation.

‘Today, we’ve had over 600 to 700 rescues of people that are in need,’ Marceno said. ‘During this difficult time, we’re at about 35 deaths, unfortunately. It’s with a heavy heart that I say that number.’

The sheriff added: ‘Last night I just sat there by myself thinking about the devastation, looking through pictures, and I’ll tell you it brought tears to my eyes. We are going to work harder and we are going to be stronger than ever.’

As the death toll from Hurricane Ian jumped to 52, at least 35 of the deaths took place in Lee County, home to Fort Myers and epicenter of the hurricane’s devastation on Florida’s Gulf Coast 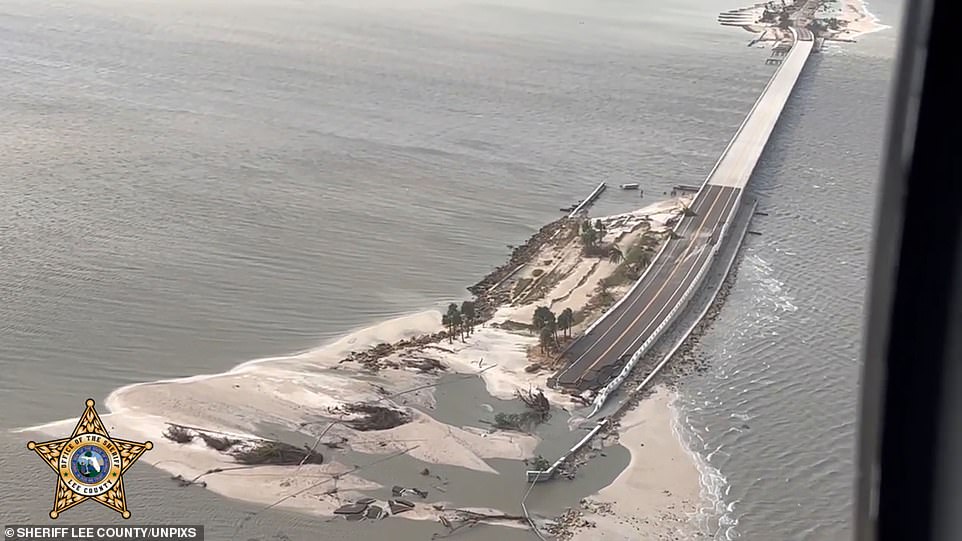 The county faces intense scrutiny over its failure to send out evacuation orders in time, as the call was delayed by 24 hours 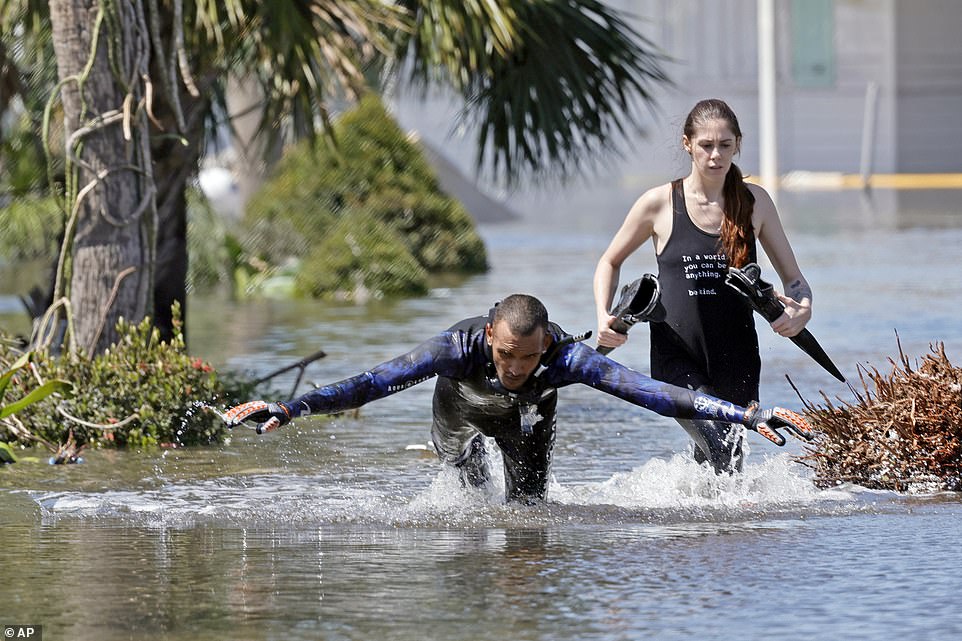 Pictured: Lee County resident Jonathan Strong dives into flood waters with his girlfriend to help check on residents in a flooded mobile home community on Thursday during the storm’s rampage 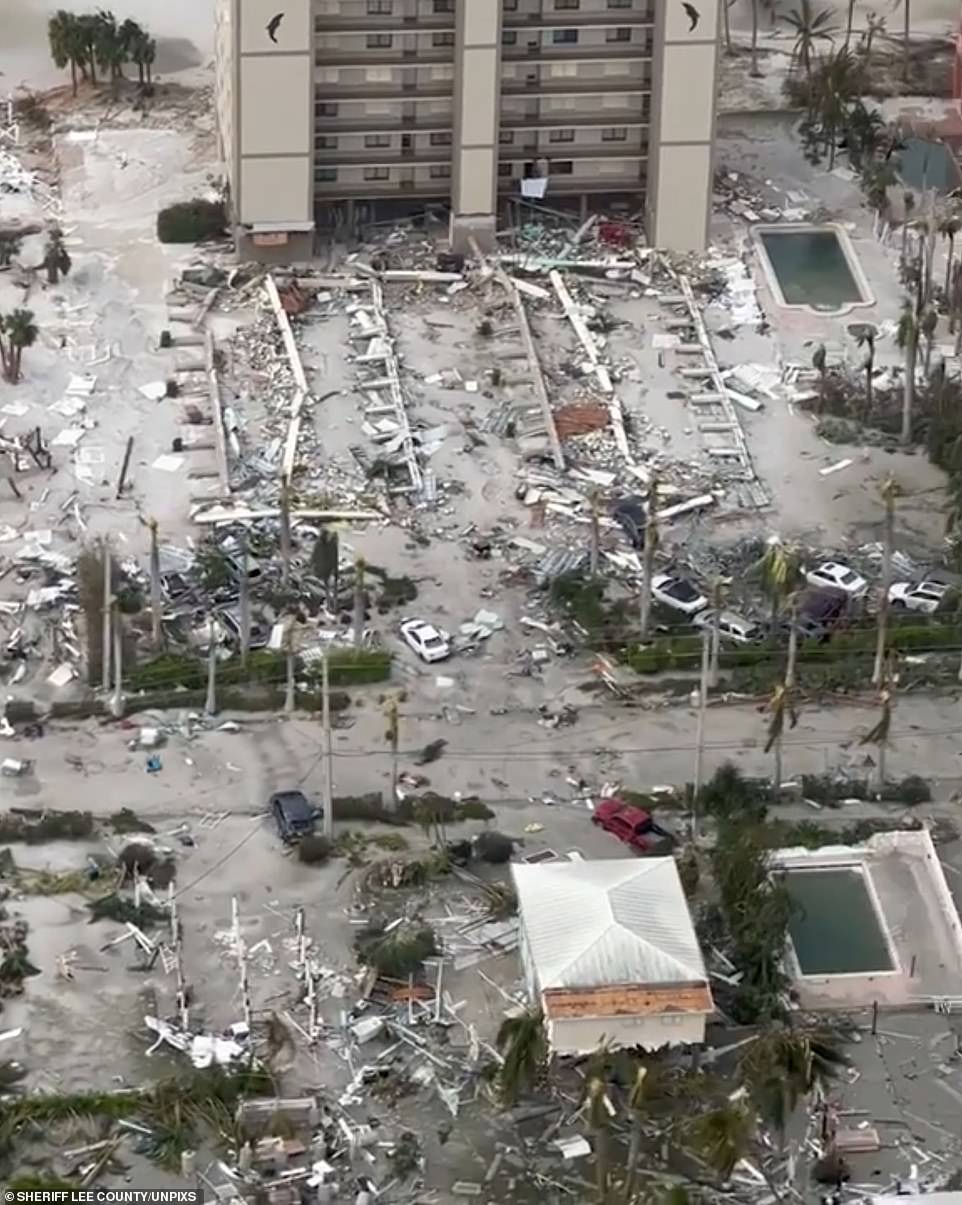 Officials said that on Saturday alone, the county had seen between 600 to 700 rescue operations 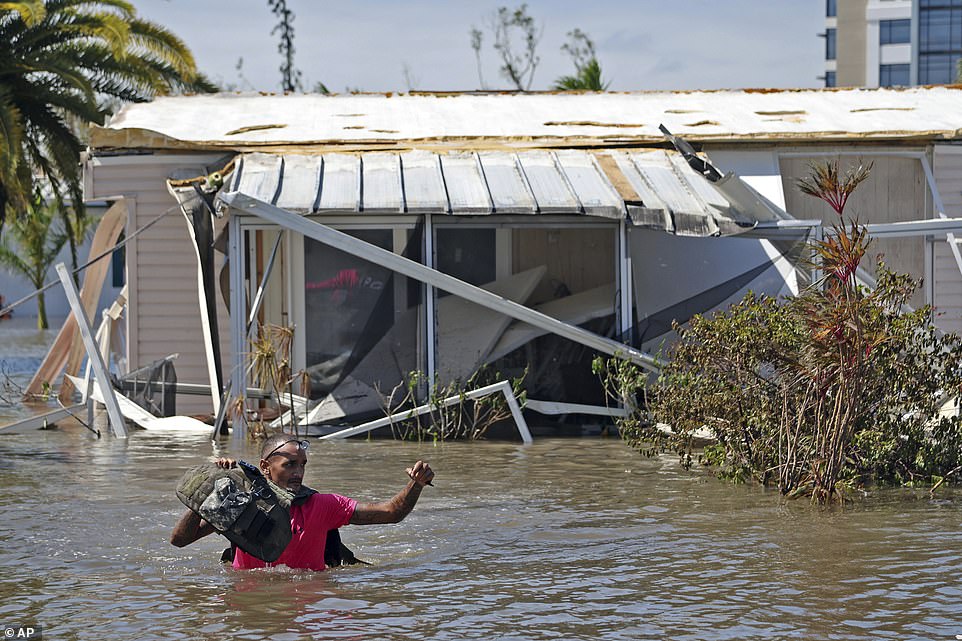 The hurricane decimated the area, destroying homes and flooding entire communities in the county 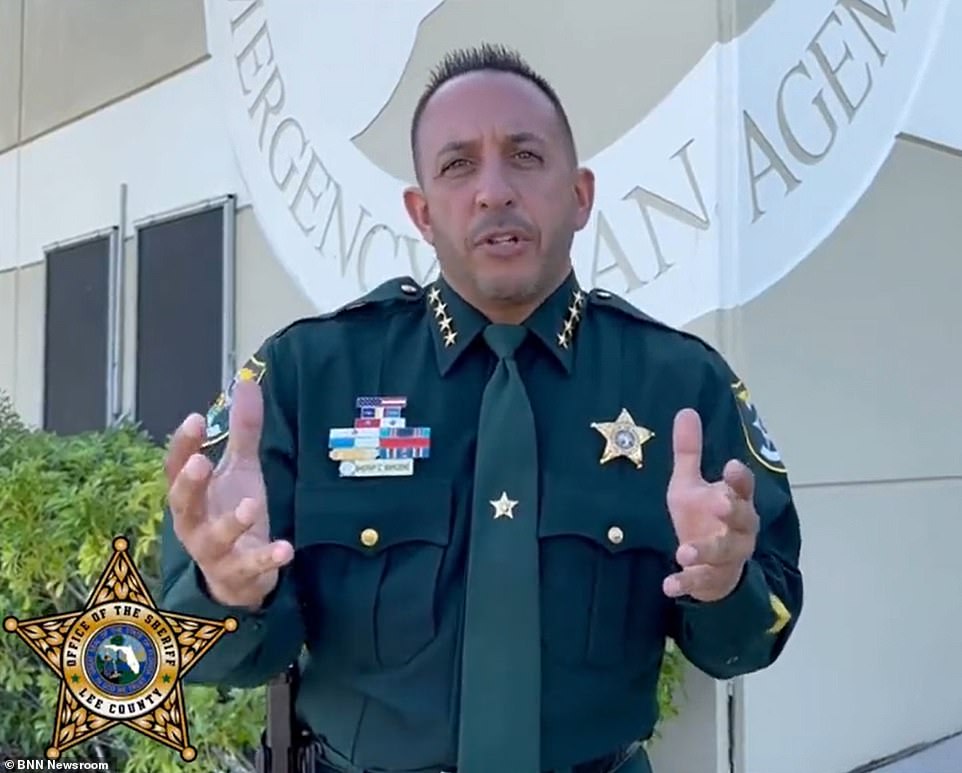 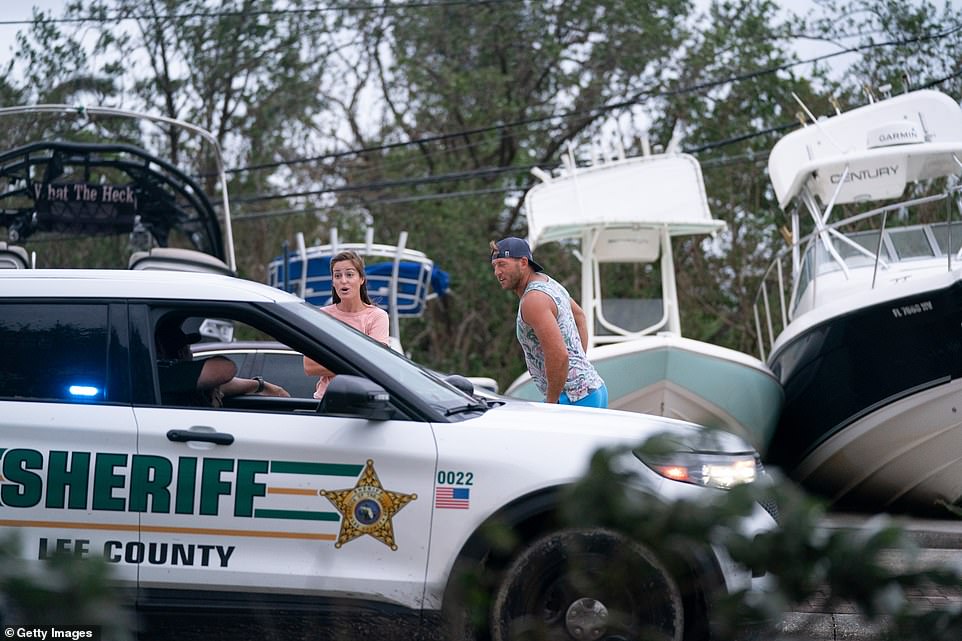 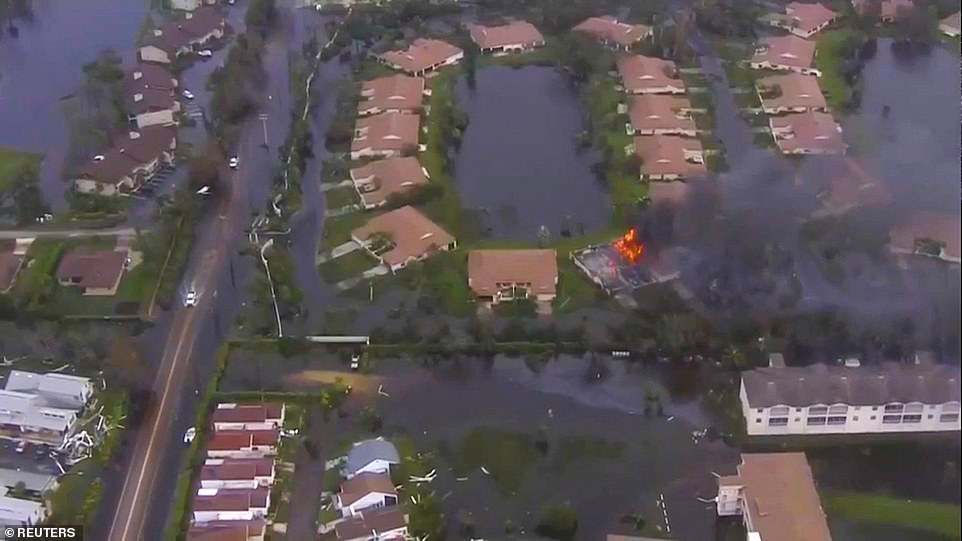 Pictured: Neighborhoods in Lee County completely submerged by storm surges as a fire breaks out in one of them 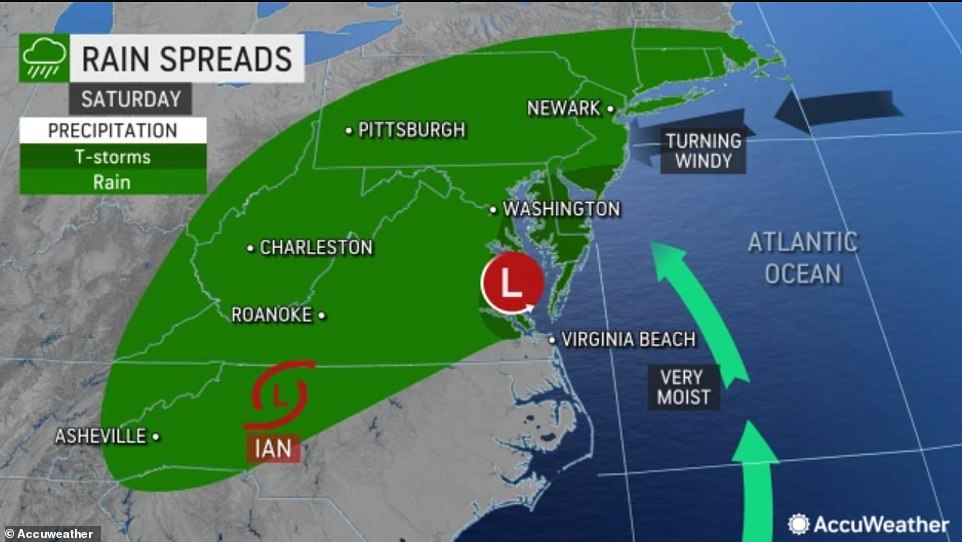 On Saturday the remnants of Ian were pushing north toward Virginia and are expected to bring widespread rain, with isolated risks of flash flooding in parts of the Appalachians and the Mid-Atlantic coast

Other deaths were reported in Charlotte, Volusia, Sarasota, Lake, Collier and Manatee counties.

The fatalities reported in Florida were mostly from drowning, but others suffered different fates from the storm’s tragic aftereffects.

An elderly couple died after their oxygen machines shut off when they lost power, authorities said.

The dead also included a 68-year-old woman swept into the ocean by a wave and a 67-year-old man who fell into rising water inside his home while awaiting rescue.

Authorities also said a 22-year-old woman died after an ATV rollover from a road washout and a 71-year-old man suffered a fatal fall from a rooftop while putting up rain shutters. Another three people died in Cuba earlier in the week.

Still, there were scenes of hope in the midst of devastation in Florida, as more than 1,000 people joined search-and-rescue operations across the state. Video from Fort Myers Beach showed a man being pulled alive from the splintered fragments of a destroyed home.

Early on Saturday, rescuers continued to search for survivors among the ruins of Florida’s flooded homes, while authorities in South Carolina assessed the damage from the hurricane’s second strike there. 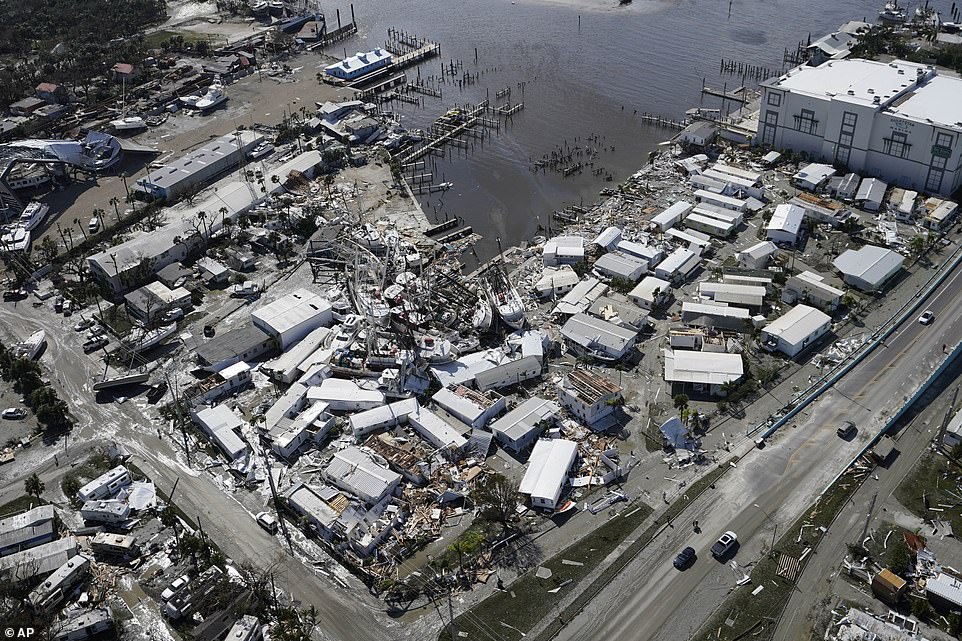 Of the 52 casualties reported so far from Hurricane Ian in the US, 35 of them were in Lee County, Florida (above) 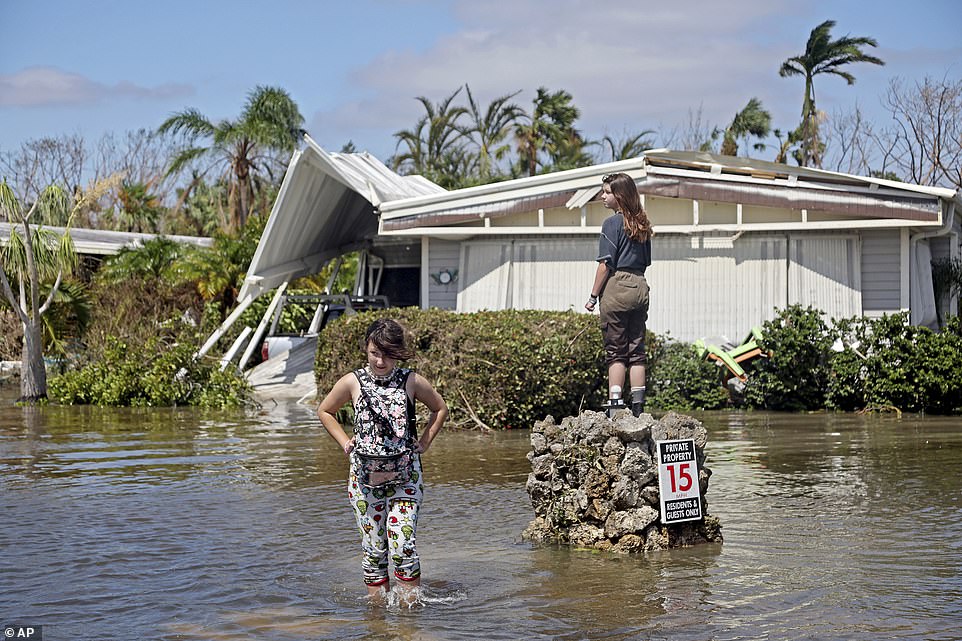 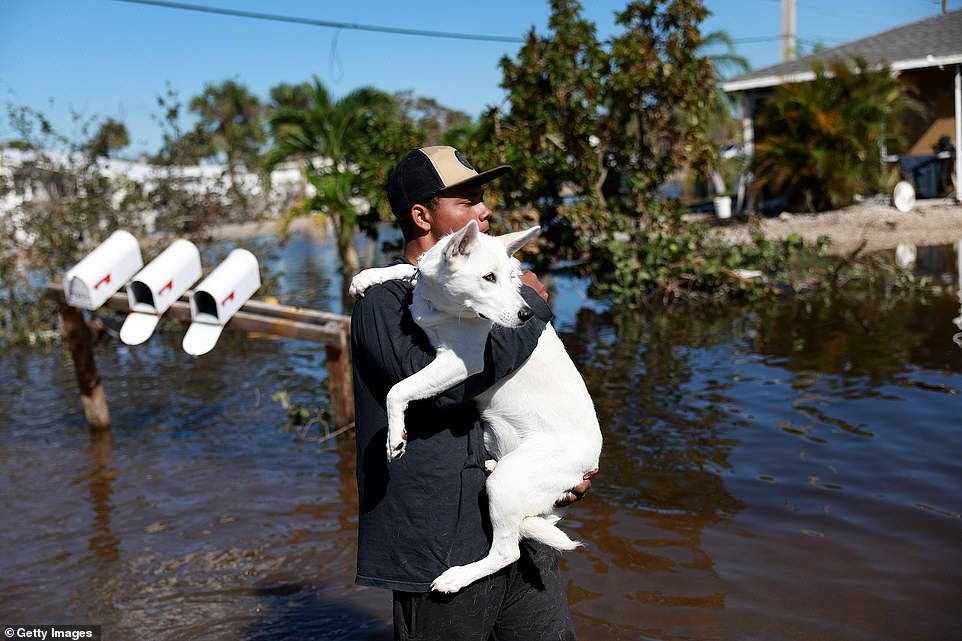 FORT MYERS, FLORIDA: Jordan Reidy carries his dog, Ivory, back to their second-floor apartment on Friday in Fort Myers, Florida. Reidy and his mother plan to stay at the home because they feel like they have no where else to go 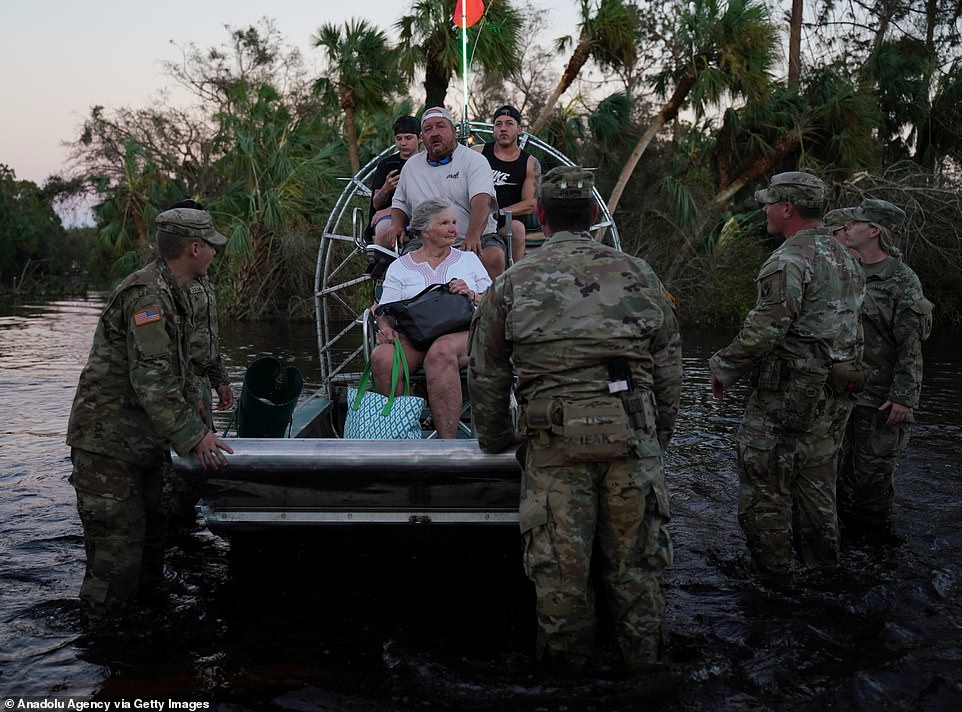 NORTH PORT, FLORIDA: People trapped in hurricane-hit areas in North Port are evacuated by rescue teams on Friday. The storm has caused widespread power outages and flash flooding in Central Florida as it crossed through the state 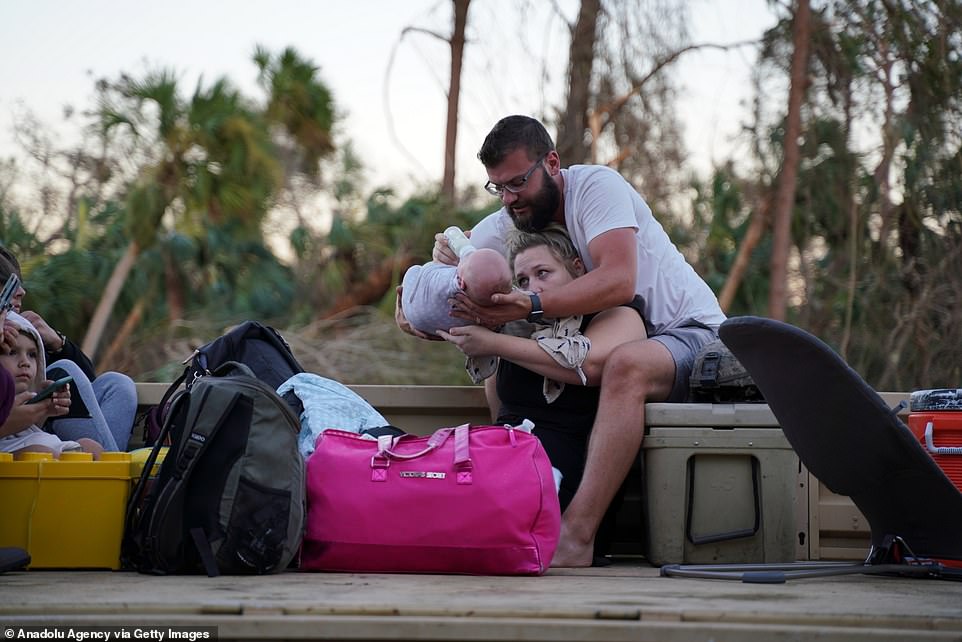 NORTH PORT, FLORIDA: People waiting for rescue teams in North Port feed an infant on Friday after Ian passed through 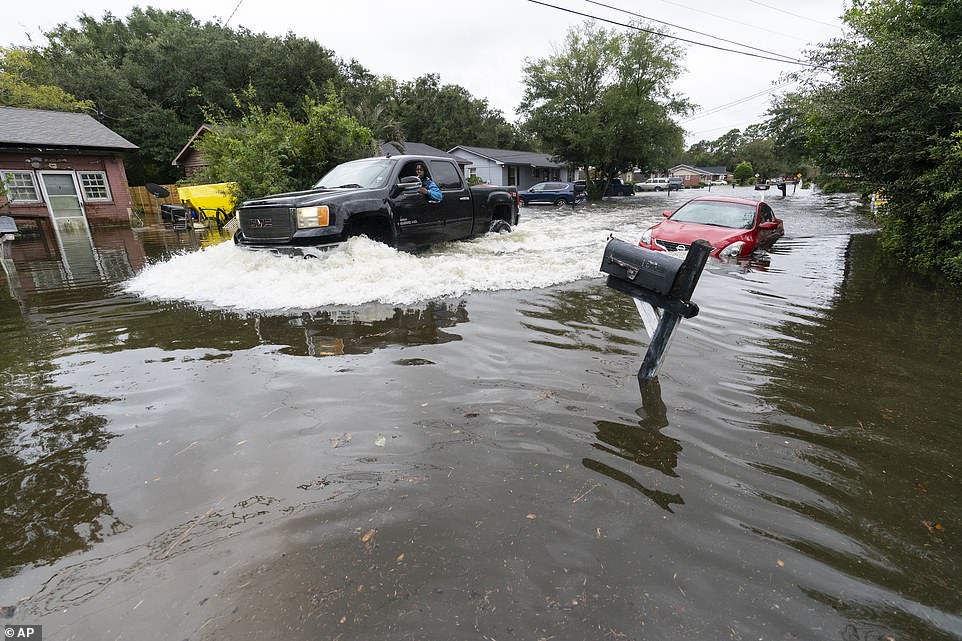 CHARLESTON, SOUTH CAROLINA: A car drives through high water from the effects from Hurricane Ian in South Carolina

Meanwhile, the remnants of one of the strongest and costliest hurricanes to ever hit the US continued to push north toward Virginia, bringing heavy rains and leaving thousands without power in the Carolinas.

On Friday, it pummeled waterfront Georgetown, north of the historic city of Charleston in South Carolina, with wind speeds of 85 mph.

The powerful storm terrorized millions of people for most of the week, battering western Cuba before raking across Florida from the warm waters of the Gulf of Mexico to the Atlantic Ocean, where it mustered enough strength for its final assault on South Carolina.

Now weakened to a post-tropical cyclone, Ian was expected to move across central North Carolina on Saturday morning and reach south-central Virginia by the afternoon.

‘Widespread showers and some thunderstorms are forecast to continue through the weekend from the central Appalachians into the Mid-Atlantic and southern New England,’ the National Weather Service said in a flash bulletin.

Rain totals are generally forecast in the range of one to two inches, though there was a risk of flash flooding in parts of West Virginia and the Mid-Atlantic coastline. 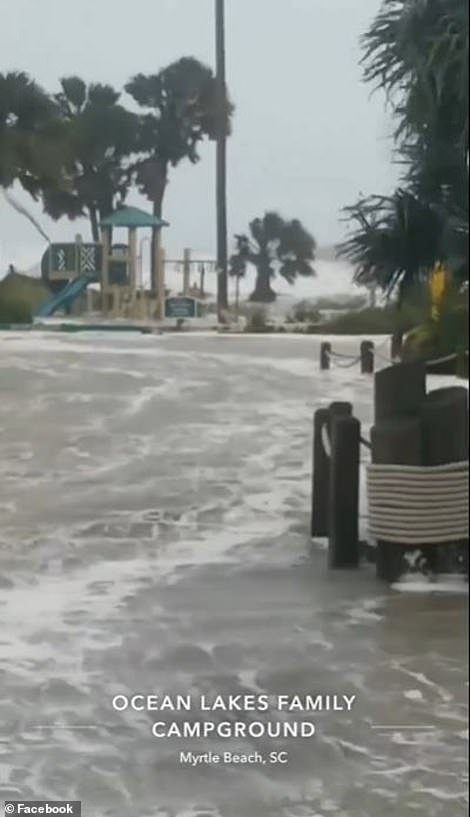 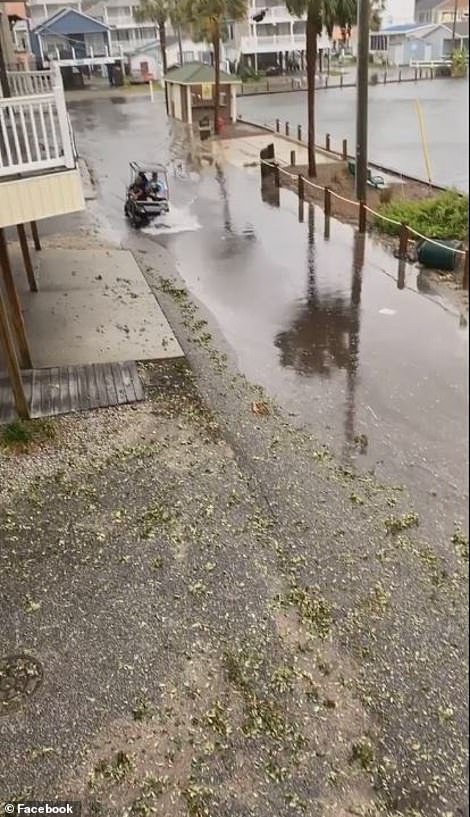 MYRTLE BEACH: Images from South Carolina show the flooding there on Friday as Ian made its second strike on the US 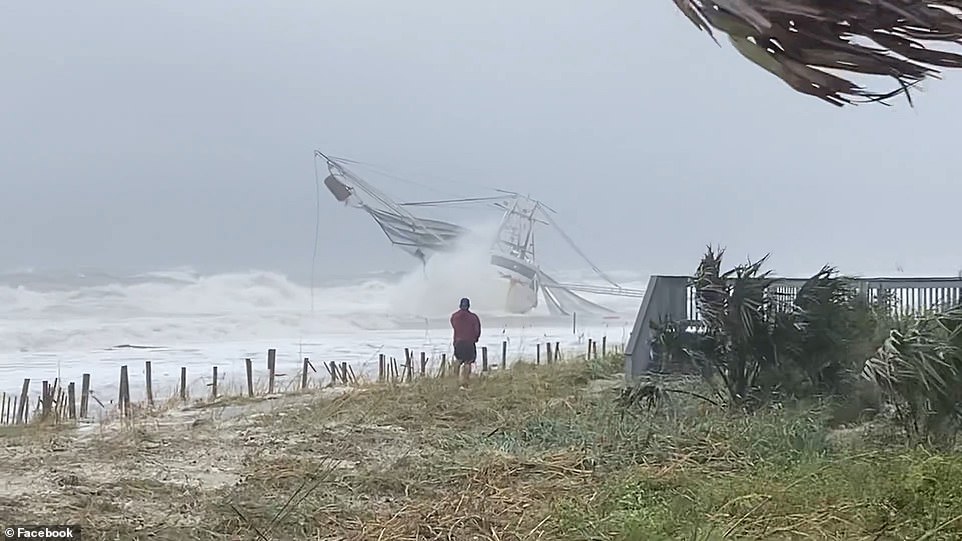 MYRTLE BEACH: A shrimping vessel is damaged by Hurricane Ian in South Carolina on Friday 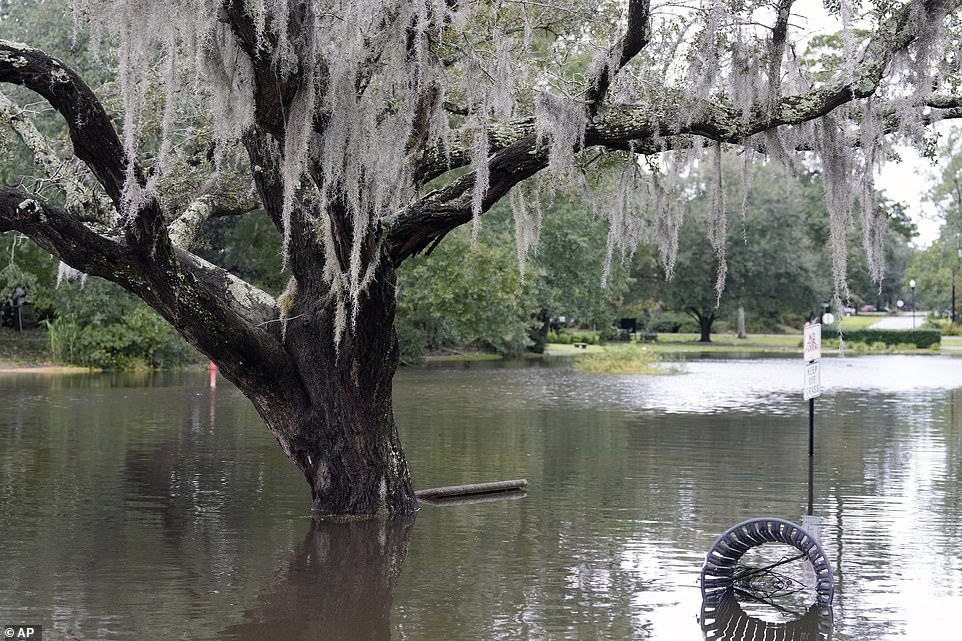 NORTH CHARLESTON: Waters from a rain-swollen pond cover grass and a foot path around Quarterman Park in North Charleston, South Carolina, after Hurricane Ian brought sheets of rain to the area

The National Hurricane Center warned that the effects of the storm will continue to be felt for days to come.

‘Major to record river flooding will continue across central Florida through next week. Limited flash, urban and small stream flooding is possible across the central Appalachians and the southern Mid-Atlantic this weekend, with minor river flooding expected over the coastal Carolinas,’ it said.

Meanwhile, distraught Florida residents waded through knee-high water Friday, salvaging what possessions they could from their flooded homes and loading them onto rafts and canoes.

‘I want to sit in the corner and cry. I don’t know what else to do,’ Stevie Scuderi said after shuffling through her mostly destroyed Fort Myers apartment, the mud in her kitchen clinging to her purple sandals.

In South Carolina, Ian’s center came ashore near Georgetown, a small community along the Winyah Bay about 60 miles north of historic Charleston.

The storm washed away parts of four piers along the coast, including two connected to the popular tourist town of Myrtle Beach.

The storm’s winds were much weaker Friday than during Ian’s landfall on Florida’s Gulf Coast earlier in the week. Authorities and volunteers there were still assessing the damage as shocked residents tried to make sense of what they just lived through. 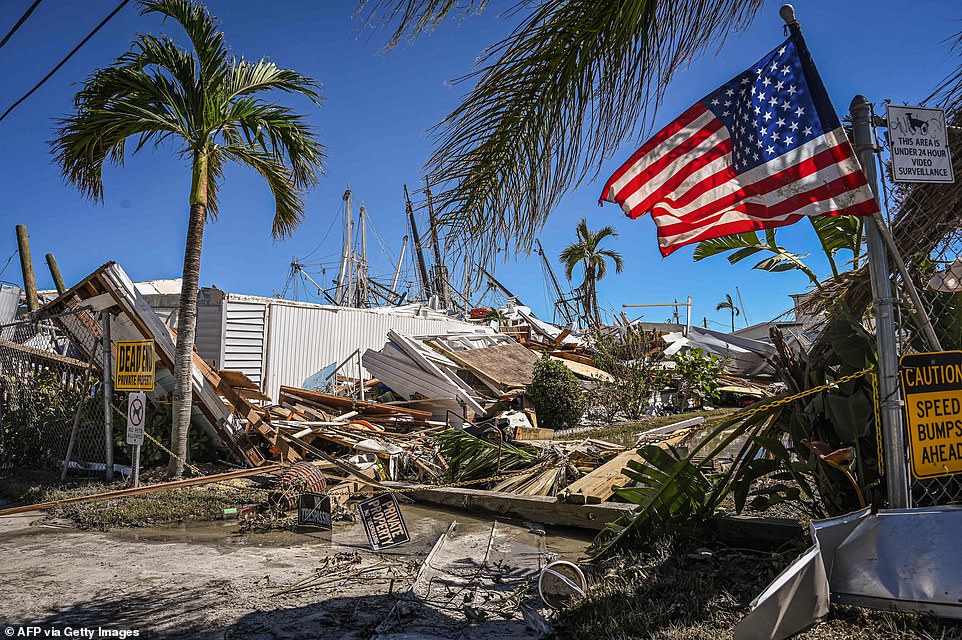 FORT MYERS BEACH: Part of a destroyed mobile home park is pictured in the aftermath of Hurricane Ian in Fort Myers Beach, Florida on Friday 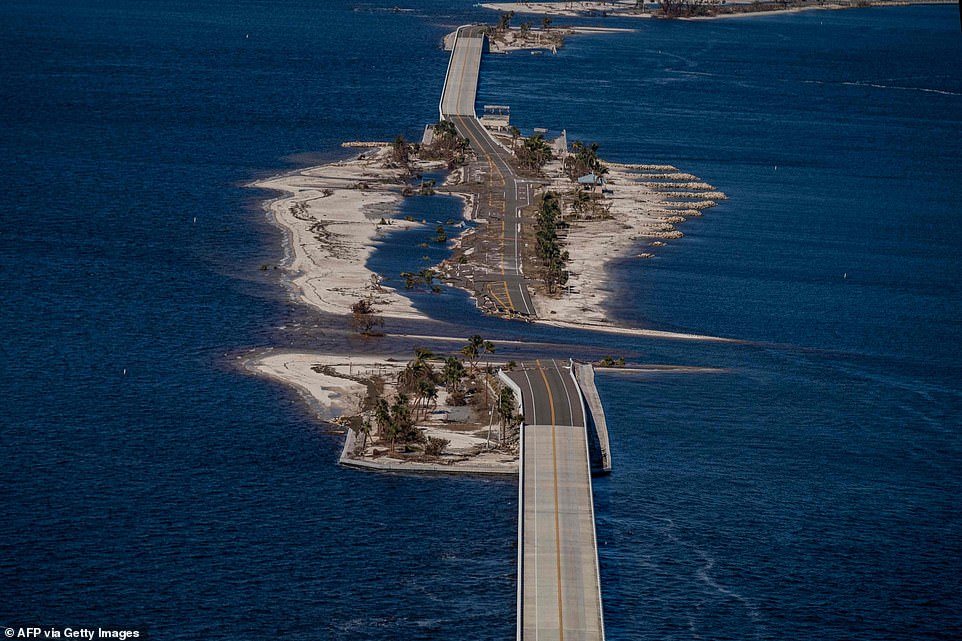 SANIBEL ISLAND: The collapsed Sanibel Causeway is seen Friday in the aftermath of Hurricane Ian in Sanibel, Florida 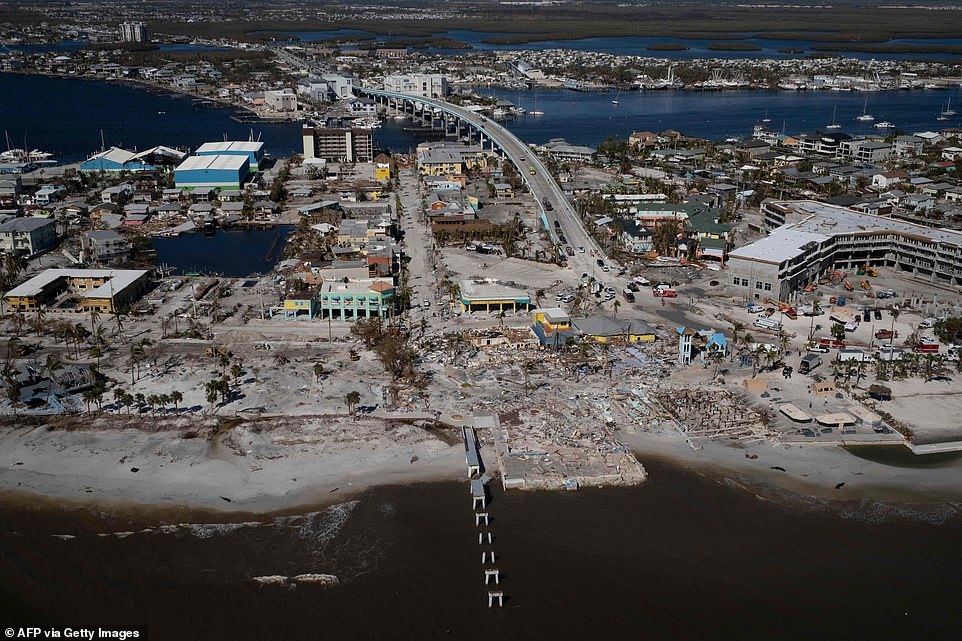 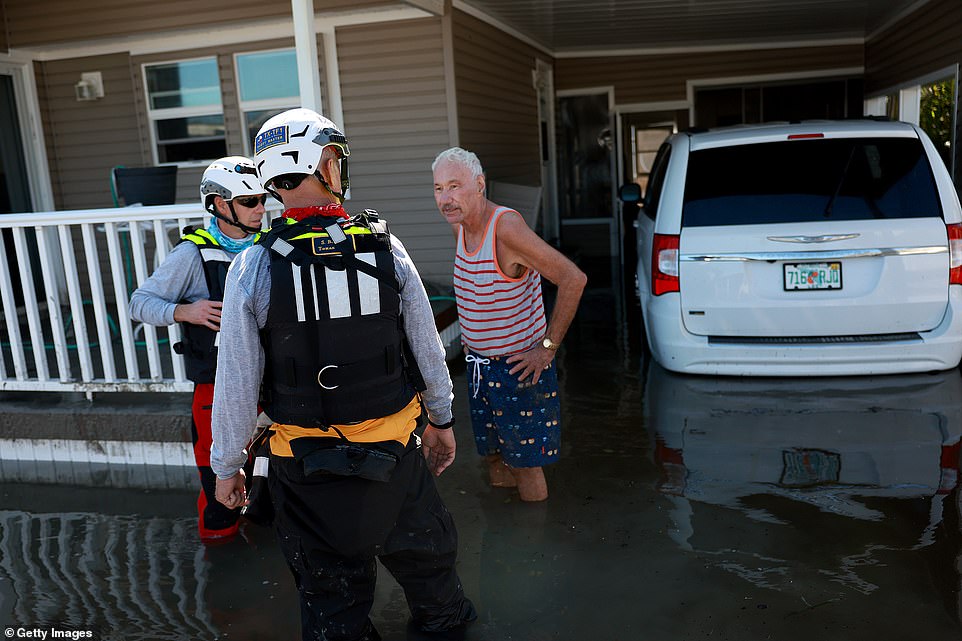 FORT MYERS: Frank Bruno speaks with members of the Texas A&M Task Force 1 Search and Rescue team as they look for anyone needing help after Hurricane Ian passed through the area on Friday in Fort Myers, Florida. Bruno said he rode the storm out in his home and told the search team members that he was okay

Anthony Rivera, 25, said he had to climb through the window of his first floor apartment during the storm to carry his grandmother and girlfriend to the second floor. As they hurried to escape the rising water, the storm surge had washed a boat right up next to his apartment.

‘That’s the scariest thing in the world because I can’t stop no boat,’ he said. ‘I’m not Superman.’

Even though Ian has long passed over Florida, new problems continued to arise. A 14-mile stretch of Interstate 75 was closed late Friday in both directions in the Port Charlotte area because of the massive mount of water swelling the Myakka River.

Ross Giarratana, a meteorologist at the National Weather Service in Tampa, said the Myakka was cresting at a record 12.73 feet Saturday morning.

Further southeast, the Peace River was also at a major flood stage early Saturday in Polk, Hardee and DeSoto counties. The majority of those points have not yet crested, Giarratana said.

‘It was crazy to look at just how quickly the rivers were rising,’ he said. ‘We knew that we were in for some record stuff.’ 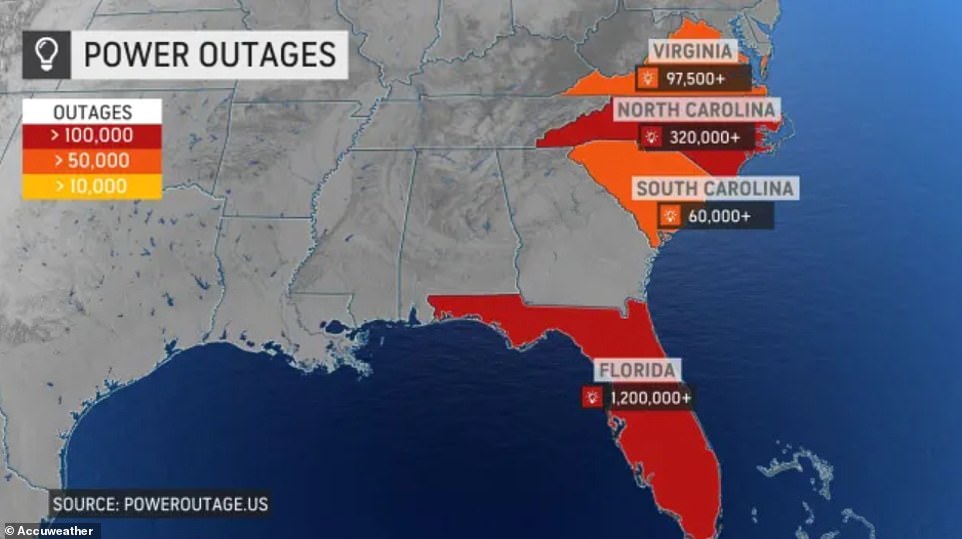 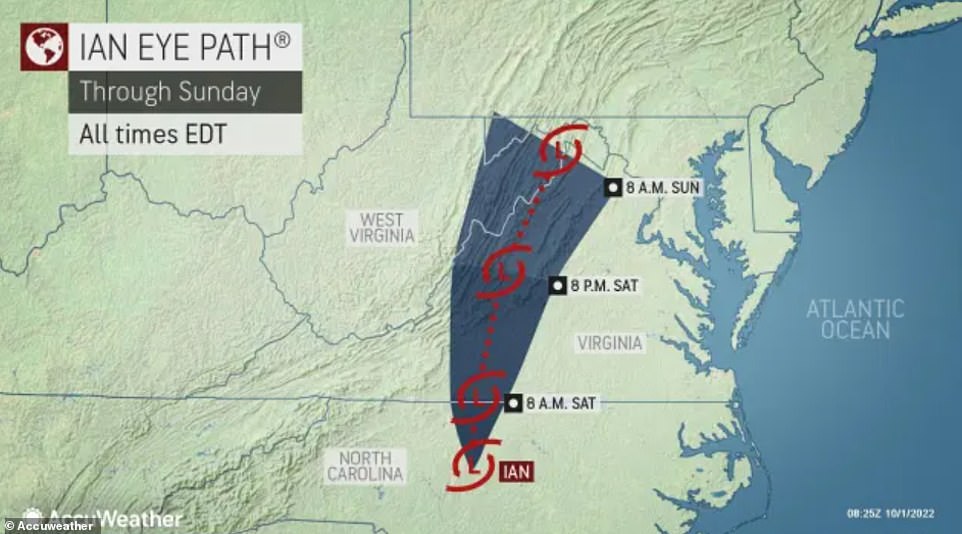 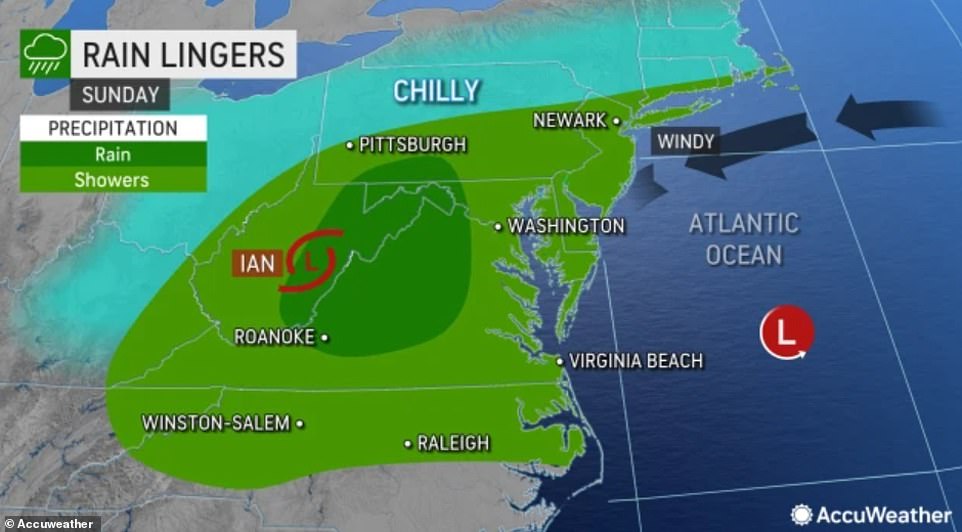 The official death toll climbed throughout the day Friday, with authorities warning it would likely rise much higher once crews made a more comprehensive sweep of the damage.

Searches were aimed at emergency rescues and initial assessments, Florida Division of Emergency Management Director Kevin Guthrie said. He described one submerged home as an example.

‘The water was up over the rooftop, right, but we had a Coast Guard rescue swimmer swim down into it and he could identify that it appeared to be human remains. We do not know exactly how many,’ Guthrie said.

Some 10,000 people were unaccounted for, he said, but many of them were likely in shelters or without power.

‘Those older homes that just aren’t as strong built, they got washed into the sea,’ said Governor Ron DeSantis.

‘If you are hunkering down in that, that is something that I think would be very difficult to be survivable.’

If those numbers are borne out, that would make Ian at least the fourth costliest hurricane in U.S. history.

In the Sarasota suburb of North Point, Florida, residents of the Country Club Ridge subdivision waded through waterlogged streets Friday. John Chihil solemnly towed a canoe and another small boat through the ankle-deep water.

‘There’s really not much to feel. It’s an act of God, you know?’ he said. ‘I mean, that´s all you can do is pray and hope for a better day tomorrow.’