The scale of destruction in southwest Florida continues to become apparent in the wake of Hurricane Ian, with new photos showing how the monster storm devastated coastal communities.

Fort Myers Beach, a town of about 5,500 on one of the barrier islands off Fort Myers, was ’90 percent’ destroyed in the storm, one official said.

‘I made it about two-thirds down the island and I’d say 90 percent of the island is pretty much gone,’ Fort Myers Beach Town Councilman Dan Allers told CNN.

‘Unless you have a high-rise condo or a newer concrete home that is built to the same standards today, your house is pretty much gone,’ he added.

Walking amid the wreckage of destroyed marinas on Friday morning, the mayor of Fort Myers, the larger mainland city, marveled at the Category 4 storm’s destructive power. 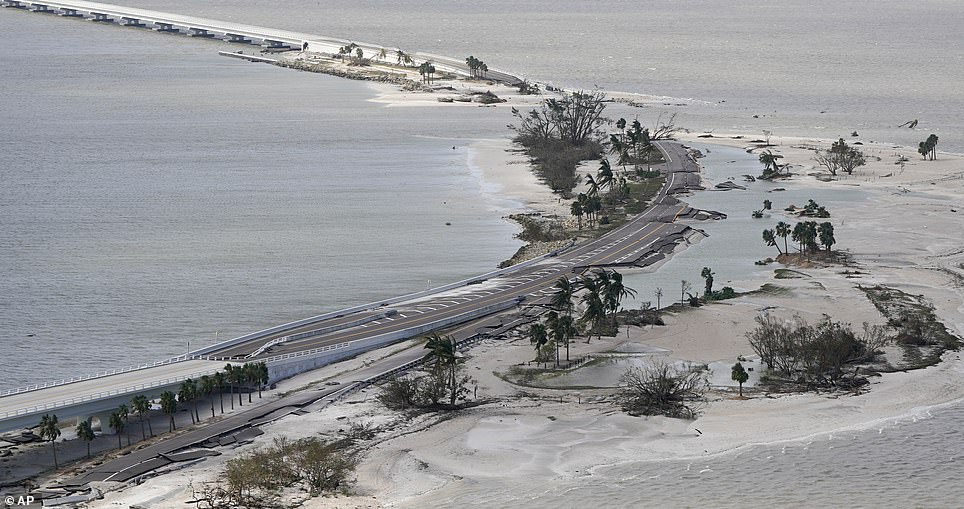 The Sanibel Causeway is seen before and after Hurricane Ian, which destroyed the bridge span in at least five places. The causeway is the only link between the Fort Myers mainland and Sanibel and Captiva Islands 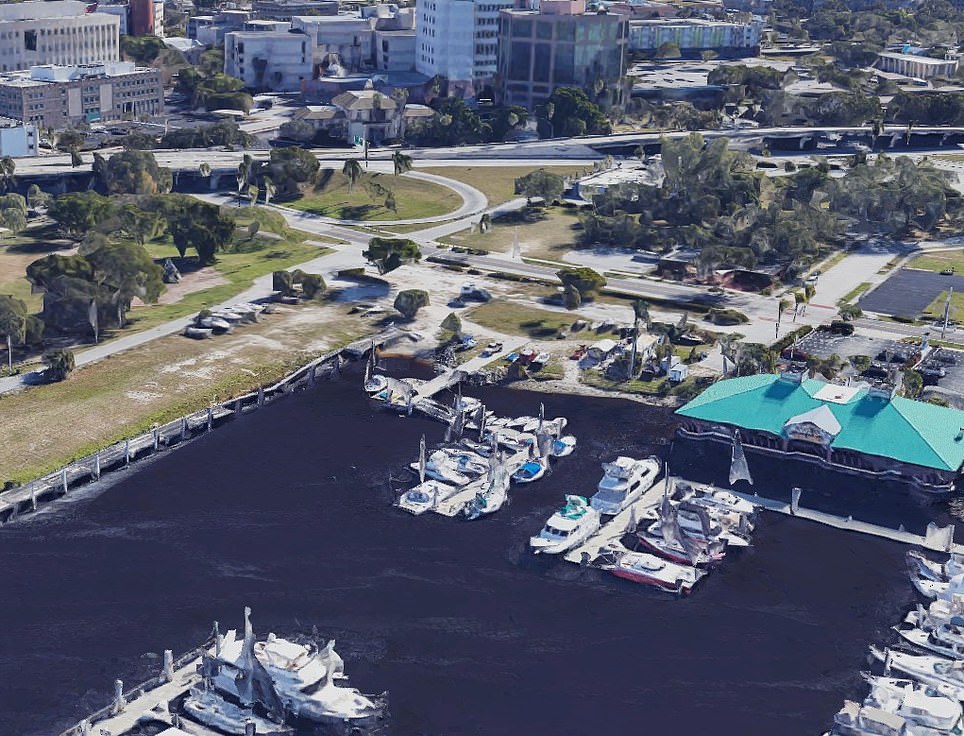 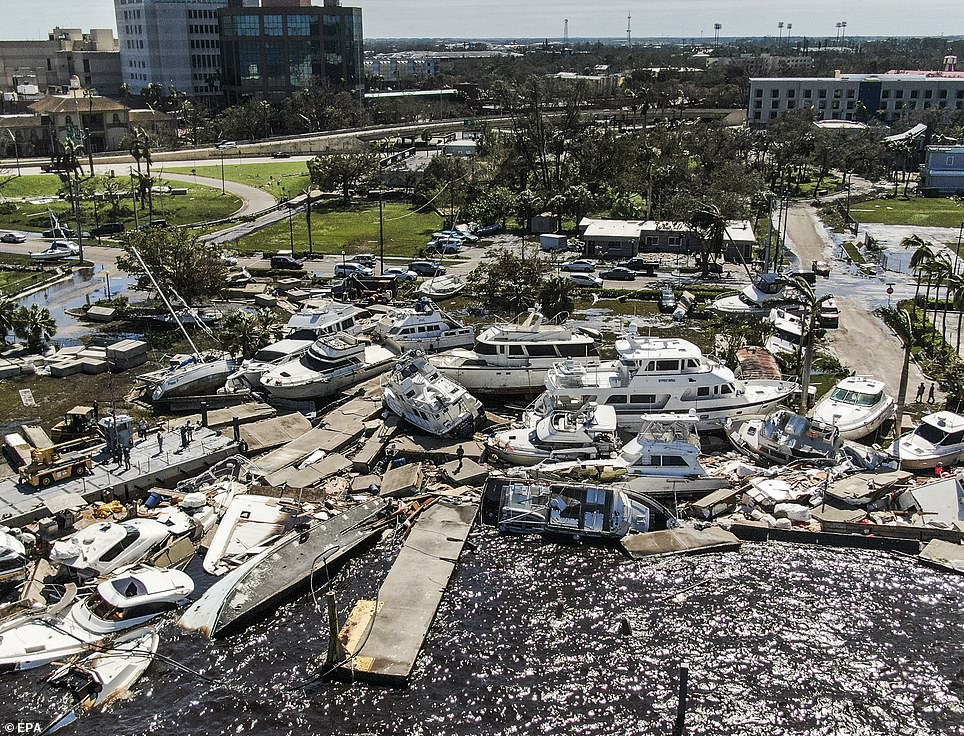 A marina in Fort Myers is seen before and after the storm. Fort Myers Mayor Kevin Anderson says that boats and sections of docks were ‘thrown around like toys’ 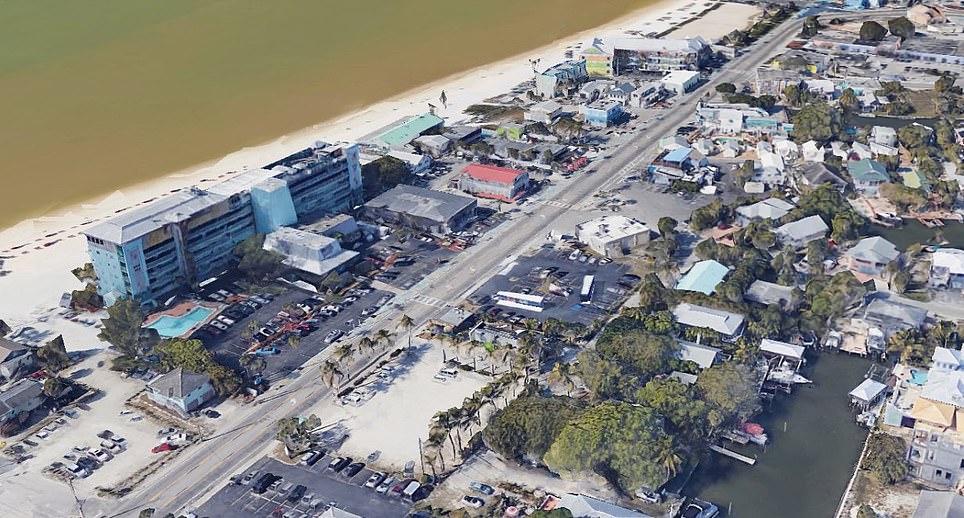 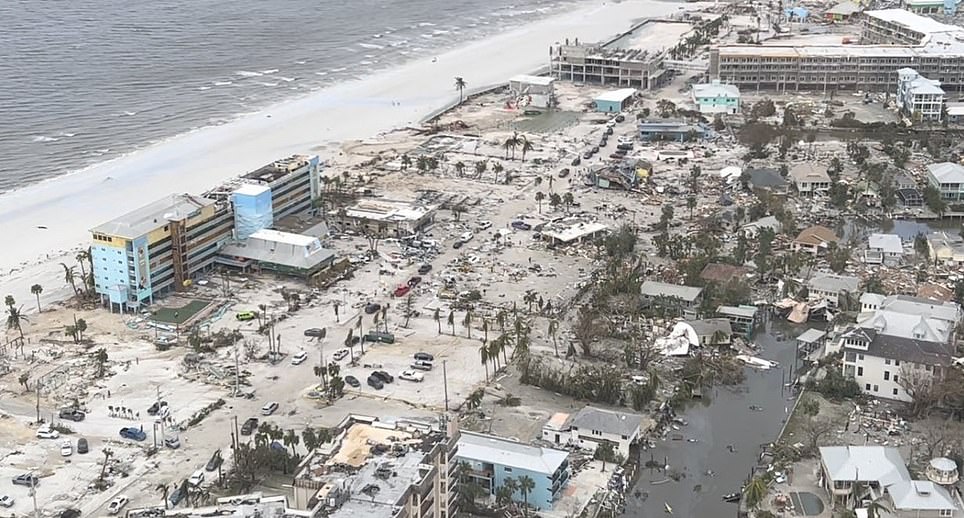 Fort Meyers Beach is seen before and after the storm hit. The barrier island town was devastated in the hurricane 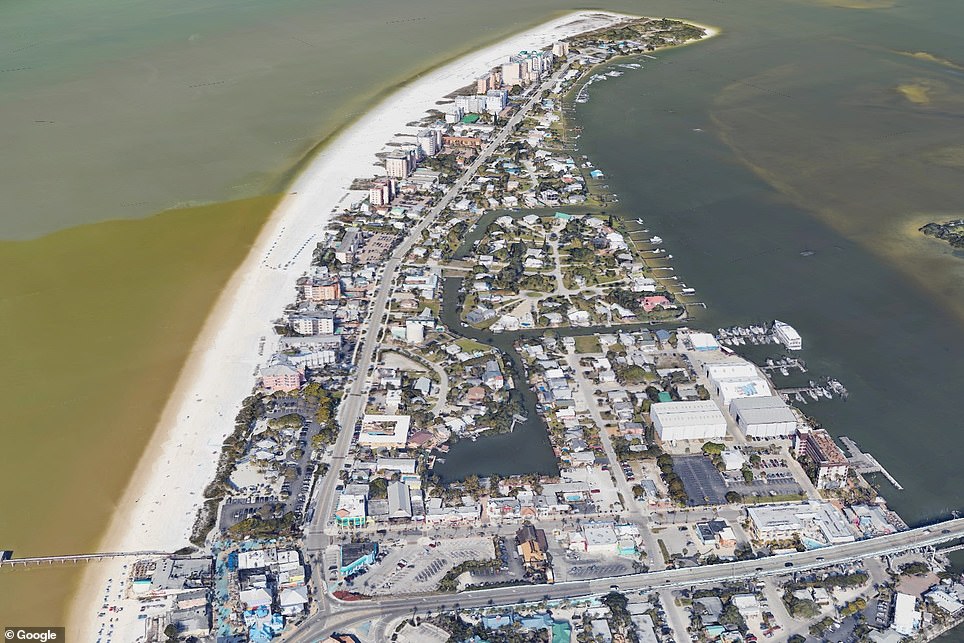 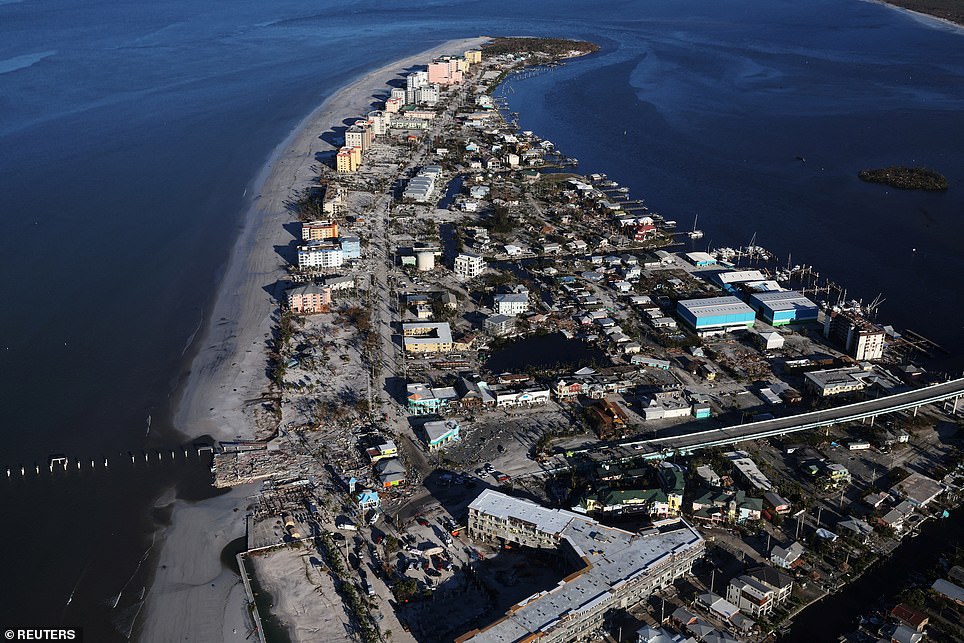 Fort Myers Beach, a town of about 5,500 on one of the barrier islands off Fort Myers, was ’90 percent’ destroyed in the storm, one official said 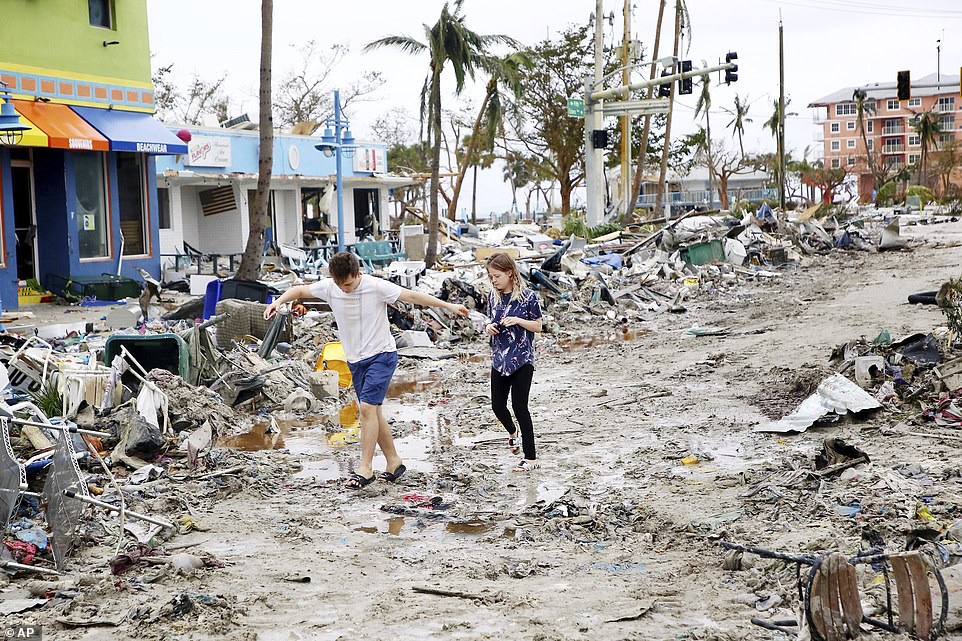 Anderson said that some 200 residents had been rescued from their homes after the storm barreled through on Wednesday.

Amazingly, he said that there were no confirmed fatalities in Fort Myers itself, which was the epicenter of destruction as the storm made landfall.

A handful of deaths in the storm have been confirmed, but 48 hours after the hurricane first hit Florida, the hundreds of fatalities predicted by the sheriff of Lee County, which includes Fort Myers, have so far not materialized.

Florida’s First Lady Casey DeSantis said on Friday the National Guard is distributing food and water, and 100,000 tarps are being handed out to temporarily protect homes with roof damage.

‘A lot of these spots, other than a slab of concrete there’s nothing left for these people, they’re not sure what to return to,’ she said in an interview with Fox News.

As well, Ian is not finished wreaking havoc, with the storm set to make another landfall in the Carolinas on Friday as a Category 1 hurricane, putting the entire South Carolina coast under hurricane watch.

Meanwhile in Florida, stunning before and after shots captured the devastation to the area around Fort Myers, with homes leveled, ships swept on to land and fires breaking out through ghost town neighborhoods.

It will take months to clean up all the damage, and perhaps longer. Some of the destruction will be irreparable.

From trees getting ripped out of the ground to signs being ripped apart, traffic lights crashing onto roadways and some buildings simply being destroyed, the impact was everywhere and almost nothing was spared. 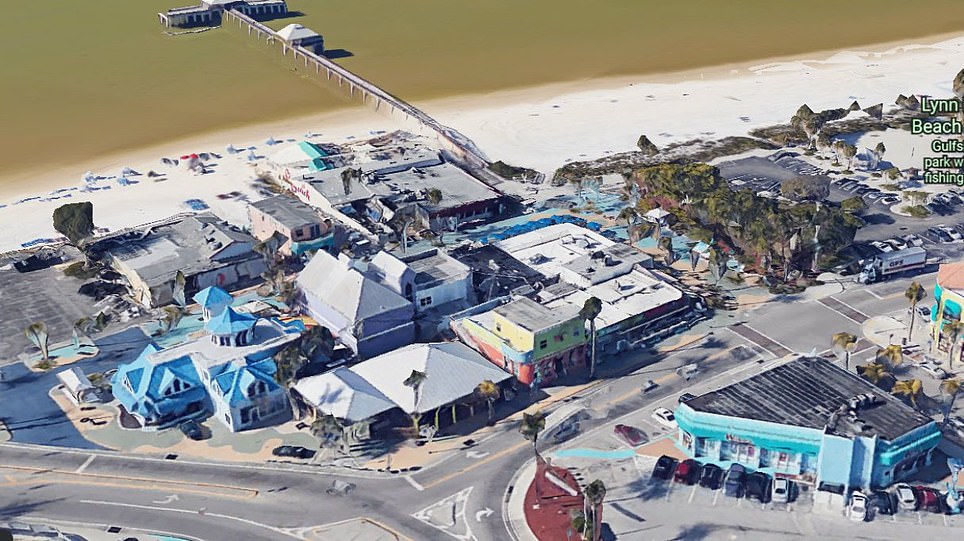 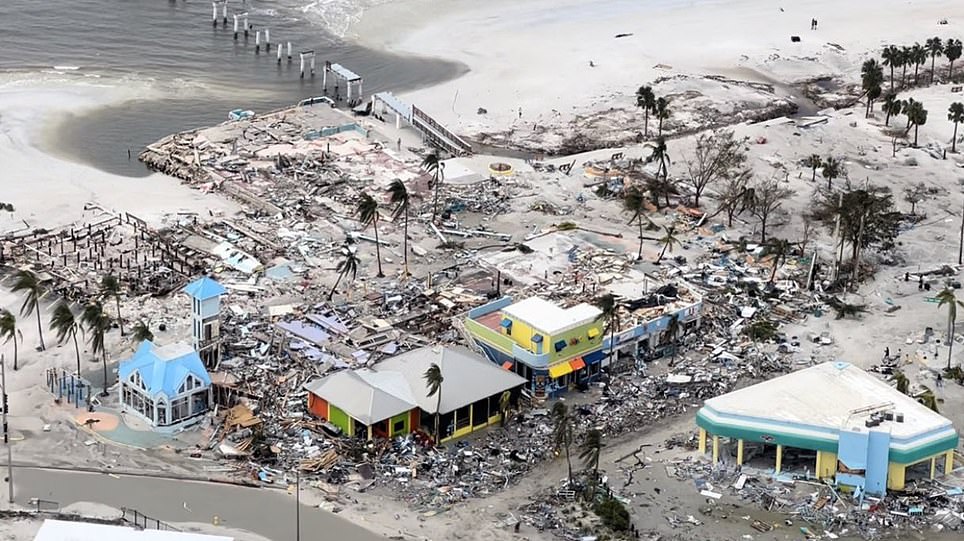 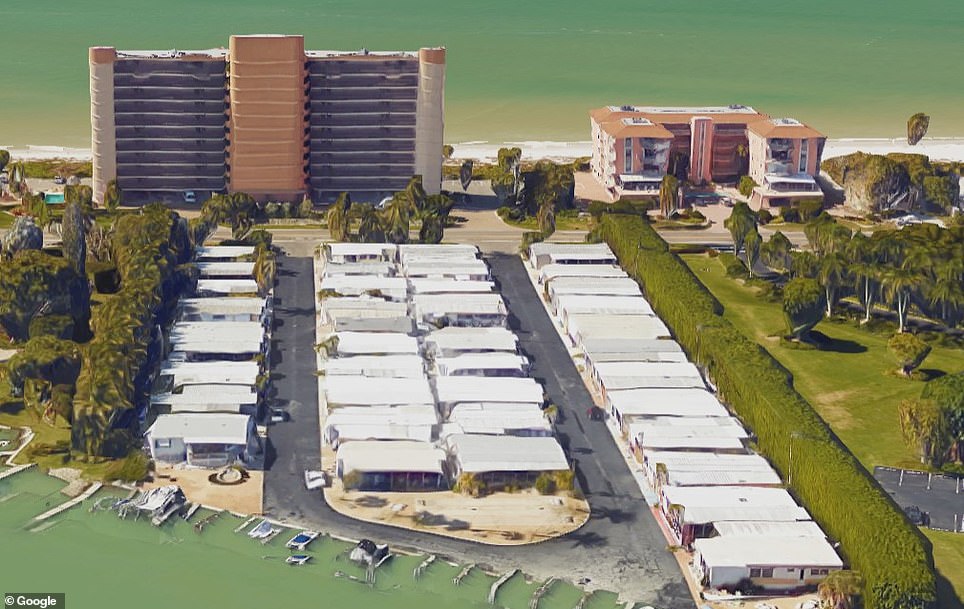 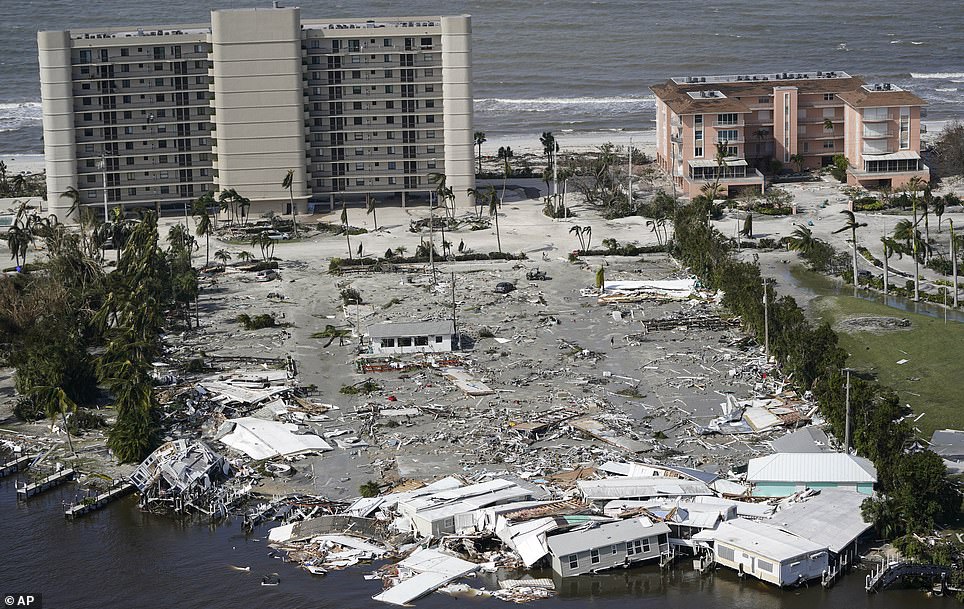 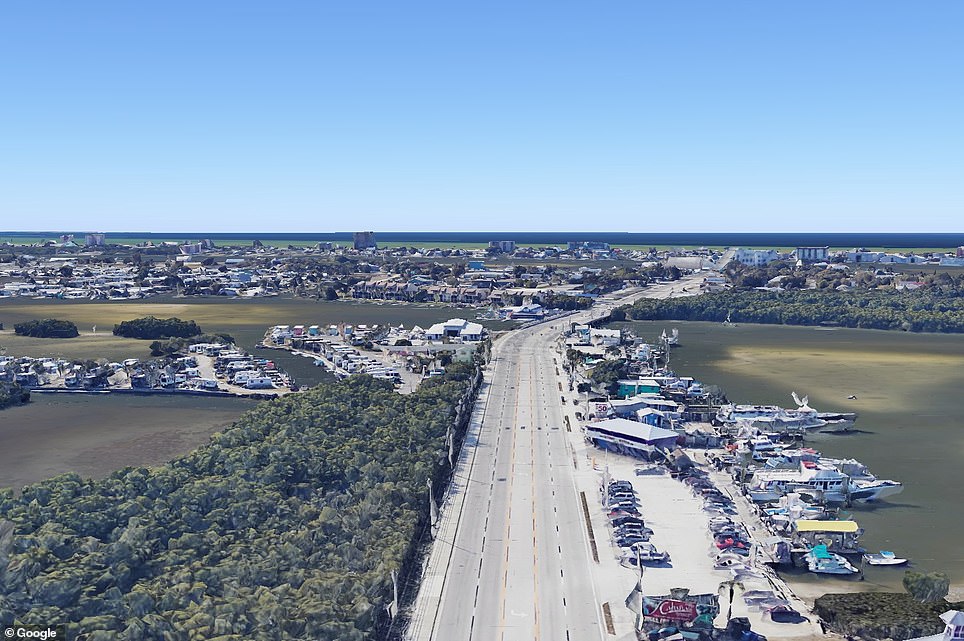 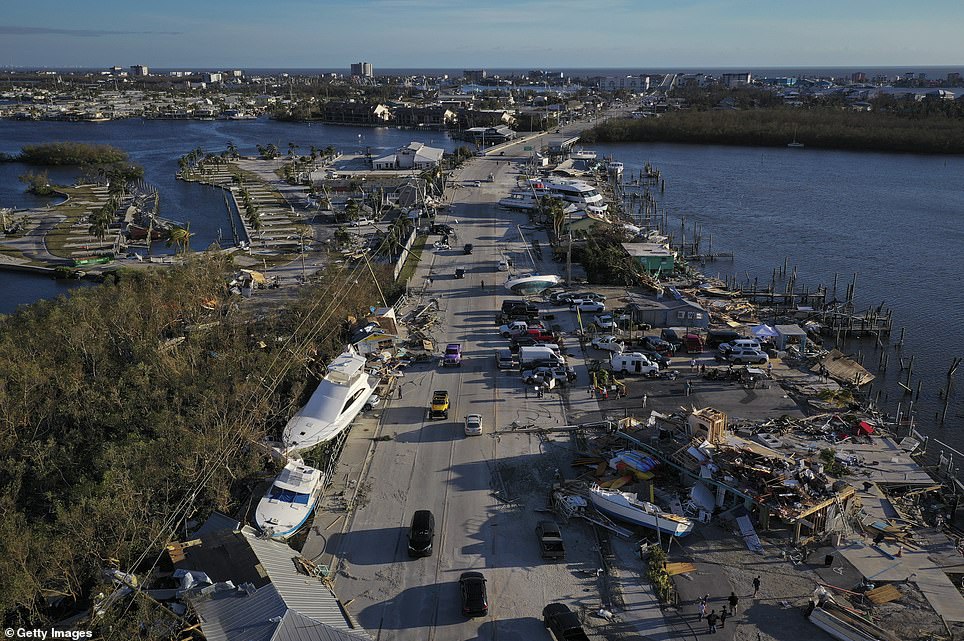 The approach to San Carlos island is seen before the storm, and afterwards as boats sit grounded in a woodland area and along the side of the road after being pushed by rising water from Hurricane Ian near Fort Myers Beach 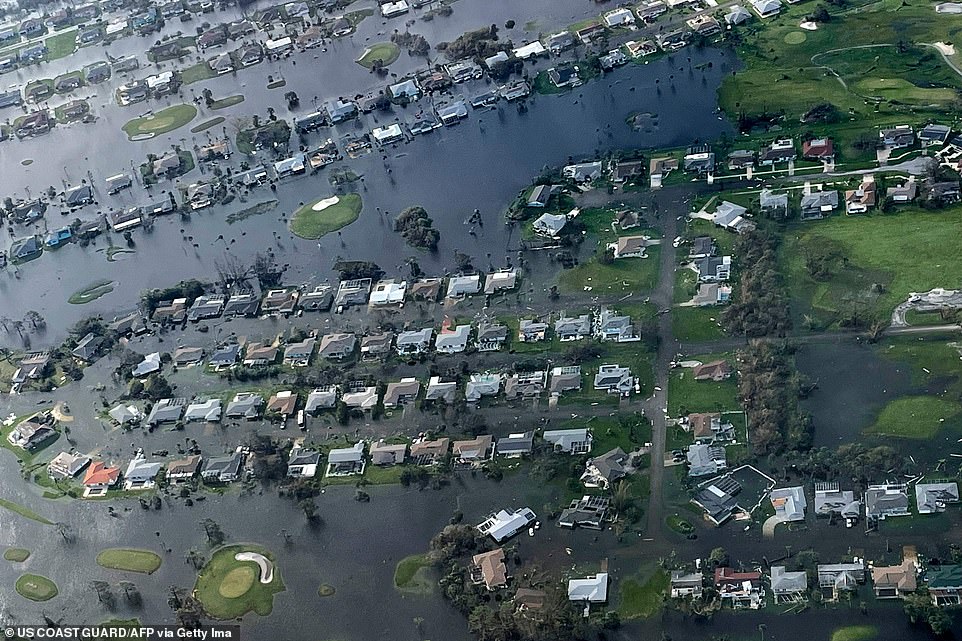 The only difference between one place and the next was the severity of the problems.

‘We will get through this,’ said Vice Mayor Richard Johnson of Sanibel, Florida. ‘And we’ll come out on the other side better than we were going in.’

Perhaps, but it will be a massive undertaking, ranging from the cosmetic to the crucial and everything in between.

Fort Myers Beach is, quite simply, destroyed. Businesses are gone. Jobs are obviously lost, at least temporarily. The cleanup will take weeks and that will almost certainly have to precede any rebuilding efforts.

‘Our entire staff is safe and although the restaurant sustained incredible damage the structure of the building is intact,’ the ownership of Nervous Nellie’s, a seafood restaurant on the beach, said in a statement. ‘We are hoping to work our way through this and be back stronger than ever.’

Around the region – Naples, Fort Myers, Sanibel – the magnitude of the damage is impossible to ignore.

Along U.S. 41, the main road in the region, countless signs outside businesses are damaged, torn or just gone.

The steel posts holding street signs in the ground are bent backward, no match for Ian’s wind and force.

The doors to storage-unit garages were twisted, sending the belongings inside some of the spaces flying into the air. The majority of traffic lights are out, wires dangling to the road below in some cases. 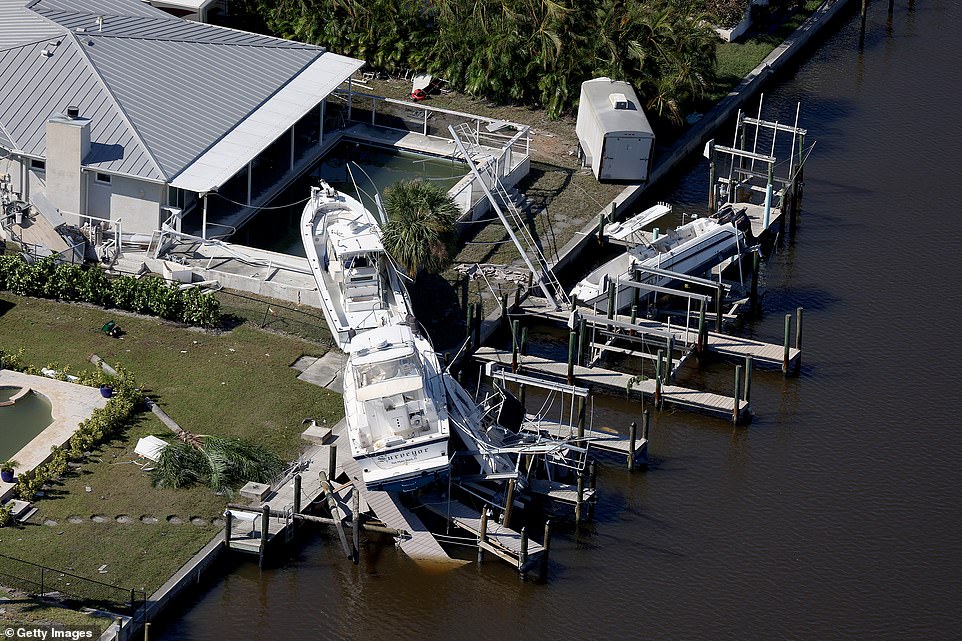 FORT MYERS BEACH: In an aerial view, boats are seen along side a home after Hurricane Ian passed through the area 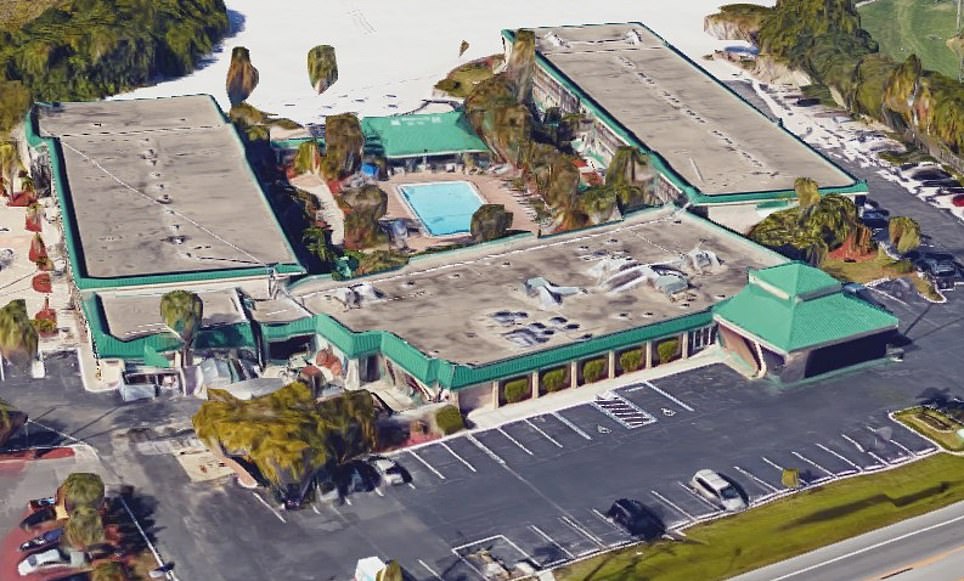 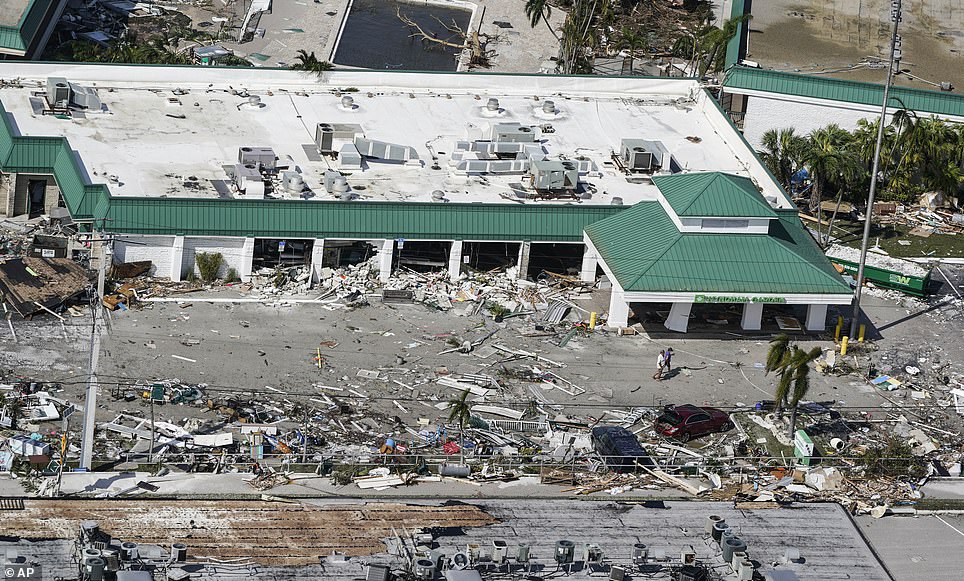 ‘I´ve seen some things,’ said Clark Manchin, a construction project manager, as he assessed the mess. ‘I’ve never seen that.’

Patience was quickly wearing thin. A 7-Eleven worker pleaded with people who filled her store: No $20s, please. Small bills only. ‘If I run out of change, we have to close,’ she pleaded. There was no gas, no hot food and – because there was no running water – no coffee or bathrooms, either.

Some of the damage, thankfully, was just cosmetic. The 150-foot-high, 250-yard deep nets ringing a Top Golf facility in Fort Myers were shredded, swaying in the afternoon breeze, not far from where a shredded American flag remained atop a pole at an office complex. 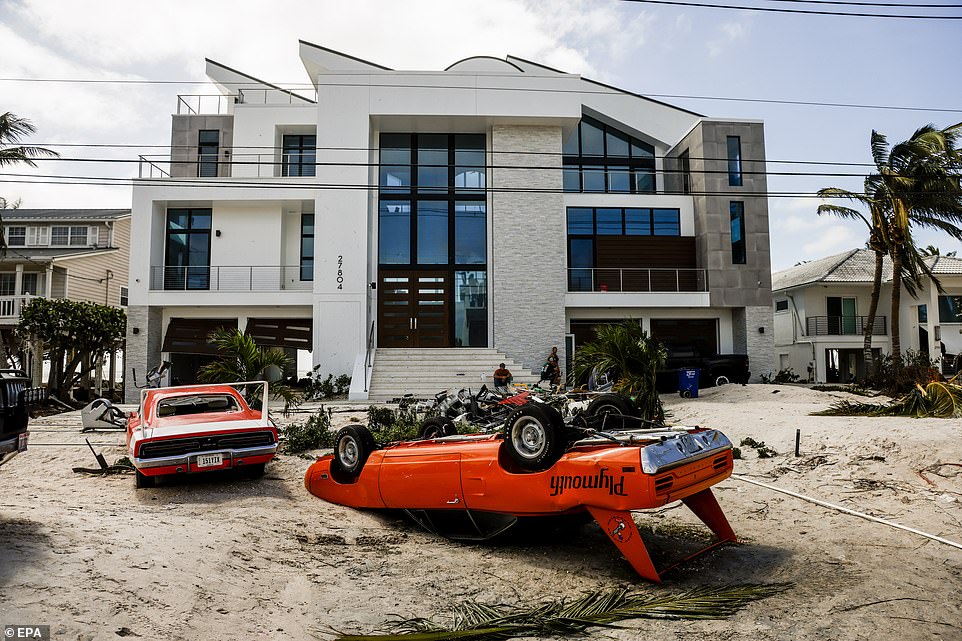 BONITA SPRINGS: A Plymouth vehicle was turned upside down outside of a luxury beachside property which was badly affected by the storm 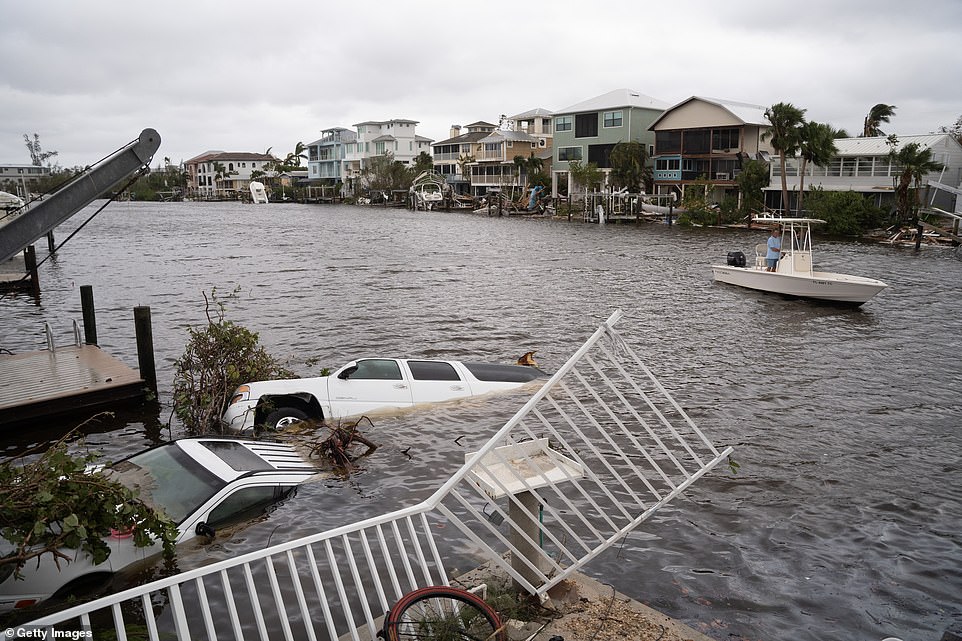 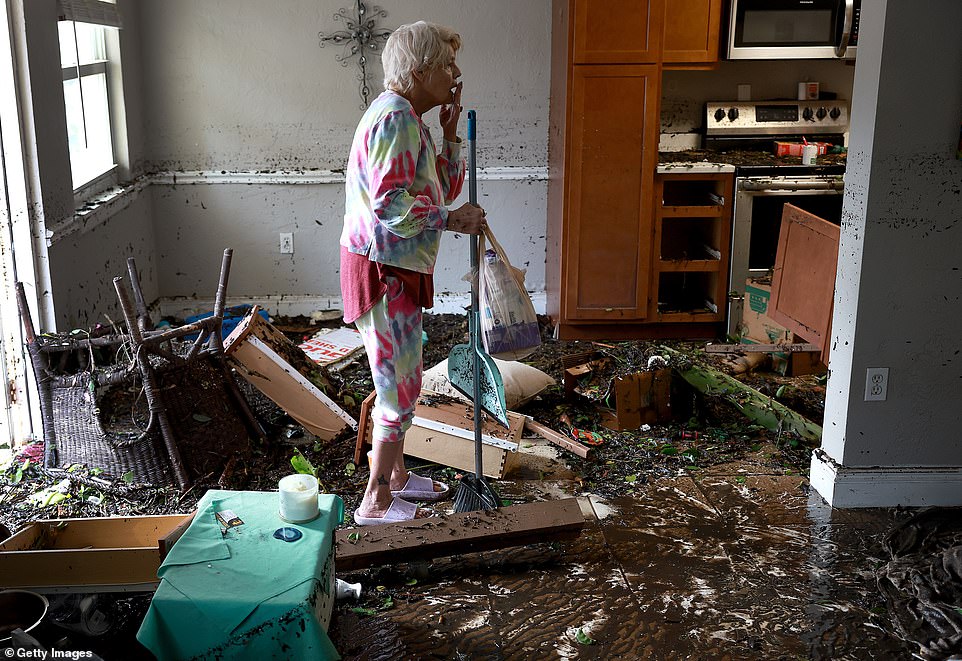 FORT MYERS: Stedi Scuderi looks over her apartment after flood water inundated it when Hurricane Ian passed through the area in Fort Myers, Florida

At Florida Gulf Coast University, a set of bleachers – once on the sideline of the soccer field – blew halfway across the pitch and wound up crushing one of the goals.

In other areas, the damage was far worse. At an RV park in Fort Myers, debris from a destroyed golf cart floated in deep standing water Thursday, long after the storm cleared.

Downed power lines and the destroyed poles they were attached to blocked the entrance. And down the street was a barn-style building that had been under construction. Its walls collapsed, the roof pinning the shredded lumber on the ground.

The damage assessments, and the cleanup, are just beginning.

‘We have to be patient,’ Sanibel Councilmember John Henshaw said. ‘We have to start looking at where are we going to stay and live for a significant period of time. Don’t know exactly what that is. We’ll learn more as we go through this process.’