Hurricane Irma has turned Southern Florida into a ghost town, with residents heading out for safer and dryer ground this past week after days of warnings and a mandatory evacuation order.

These villages were not without their idiots however, who on Sunday announced themselves to the world when camera crews managed to capture their bizarre behaviors as 100mph winds tore up the state.

Some decided to head out and enjoy a spot of fitness as they biked into exhausting headwinds or surfed over churning waves.

Others went more outside the box, like the man who declared he had decided to tie his shirt to a post and ride out the hurricane in the middle of a major Miami street.

And then there were some whose actions seemed to defy all thought and logic, most notably two sailors who headed out to sea as the storm struck – despite the fact that they cannot swim.

They want to ride their bicycles: On Sunday morning, a number of those who ignored mandatory evacuation orders in their area made their way outside

A BICYCLE BUILT FOR TWO

CNN got video or two men who have seen fire and seen rain on Sunday, capturing the duo of dudes who decided to greet Irma by hopping on their bikes and going for a ride.

They very much risked also seeing lonely times when they could not find their friend as well, with wind gusts reaching 100mph at that time while the rain limited visibility in the city to just a few feet in areas.

The sight of the two men riding along in their spandex suits and helmets was just too much for the network anchor, who lashed out at the men for their foolish and potentially fatal decision to launch this little Tour de Irma.

‘Oh my goodness, so this is incredibly, and I’m just going to call it – this is stupid,’ said the anchor, who initially seemed to be preparing  viewers for some far harsher language.

‘These two guys going out in the rain and in these storms.’

She then offered viewers, who at that point had no doubt sat through hours upon hours of the network’s nonstop hurricane coverage, some warnings while also wondering outloud how this feat was even happening given the conditions in the city.

‘First of all, I don’t know how they’re staying up on two wheels. Do not do that,’ she said, while bundled up under a raincoat and hood that hid most of her face.

‘They may be joy seekers, but that is absolutely unsafe. The Miami Beach police and fire have said if those two guys get injured, they will absolutely not be able to help them out.’

No sooner had she finished out her statement then the men were off again, quickly becoming invisible as they pedaled off into the Category 4 storm’s darkening skies. 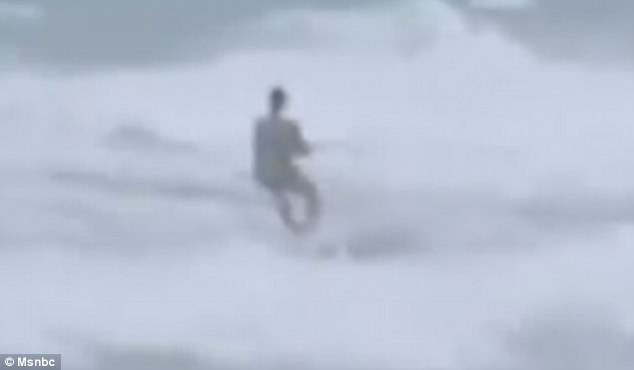 Shred-head: The village idiots of Miami Beach easily proved themselves the most unimpressive of the bunch, with one man seen kite-surfing Saturday (above)

It was rival MSNBC who kicked off this latest cable news war when they managed to catch a rare glimpse at Florida’s first entry in the state’s unsanctioned idiot pageant.

It all unfolded during a live report from Miami Beach, with reporter Mariana Atencio having her update interrupted by the anchor back in the New York City studio.

She was then asked by a very puzzled Alex Witt: ‘Wait, Mariana, before you get reporting. Is that somebody kite surfing behind you?’

And it was, with the man suddenly riding a gale force wind and massive crest closer to the camera.

Atencio confirmed it was a kite surfer, adding that this was not something officials wanted to be seeing at that time.

The man then, as if on cue, tumbled off his board and into the water.

Viewers who eagerly thought he might have learned his lesson quickly got a rude awakening however, as he turned his contraption back out to sea in search of more waves.

This despite the very real risk of finding himself in a watery grave. 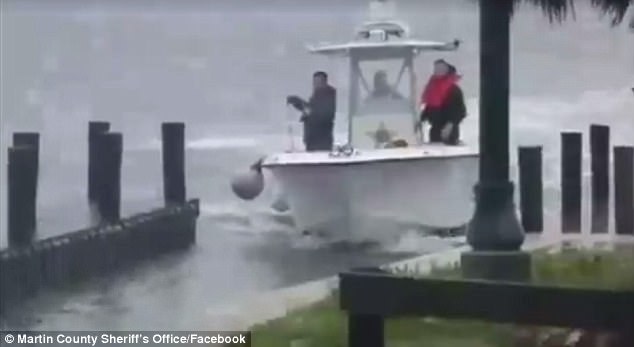 Land ahoy: In Martin County, two people who do not know how to swim went out on their sailboat as the storm struck 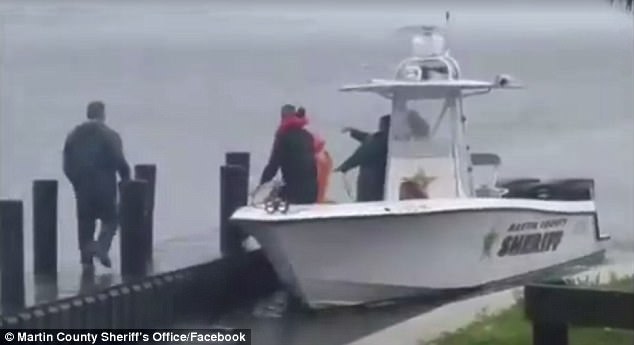 Overboard: The treacherous journey put the lives of the rescuers at risk at well, but all were able to safely make their way back onto dry land

GO WITH THE FLOW

Law enforcement also shared stories of some of the residents they were called upon to aid during the early hours of the storm.

And while anyone caught outside could be accused of stupidity given the countless warnings from the state’s governor and federal agencies, it was two men in Martin County who stood out from the pack.

The Sheriff’s Department posted to their Facebook account Sunday that there team was heading out to sea in order to save two men.

‘MCSO Marine Rescue and Strike Teams are launching into treacherous waters to begin a marine rescue of two people who remained on their boat near the causeway, read the post.

‘The mariners say they are unable to swim. We will keep you posted on this. Please pray for the safety of our brave first responders.’

The treacherous journey put the lives of the rescuers at risk at well, but all were able to safely make their way back onto dry land. 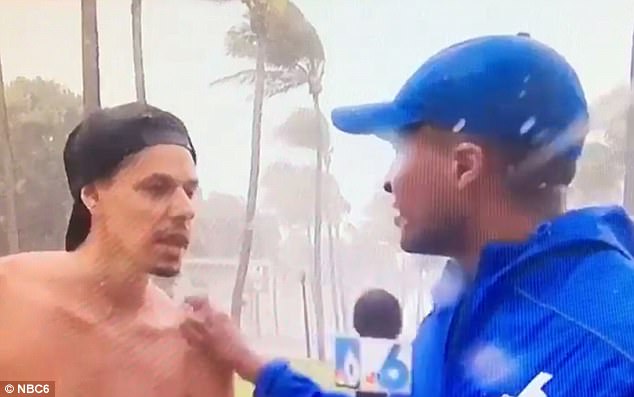 Blown away: Miami Beach also produced a man (above) who announced he would be tying himself to a post in the street while the Category 3 storm hit the city 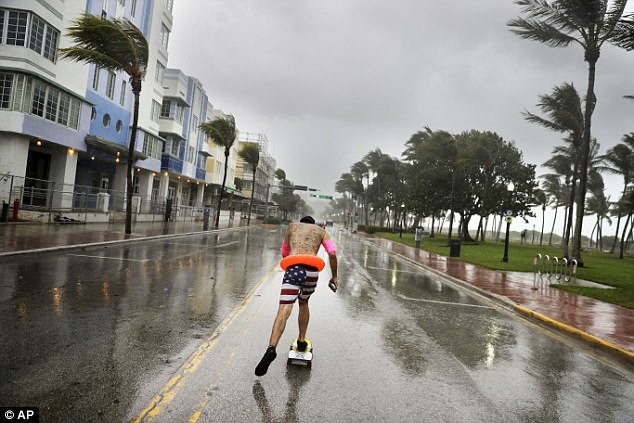 Skate date: The plan was not ready just yet though, as the man had to still built his post

SURVIVAL OF THE THICKEST

The final contestant to enter on Sunday popped up during an update from NBC 6, the network’s Miami affiliate.

Michael Spears was informing viewers of the latest developments when a shirtless man in American flag shorts crept into his frame.

He then announced that he was going to secure himself to an object in the middle of the road for the next day or so, much to the disdain on Spears, who was quick to cut short the self-promoting diatribe.

‘I’m testing this out. I’m actually doing a stunt. It sounds crazy, but there’s a meaning behind it,’ said the Miami Beach nincompoop.

‘I’m tying myself to a post down on Meridian for the duration of the hurricane. It’s all planned out with safety precautions and everything.’

Shortly after he was dismissed from the interview he hopped on his skateboard and made his way down the empty street, perhaps to find his pole.