With Hurricane Irma expected to touch down in Florida this weekend, people traveling into and out of Florida are seeing sky high airfares.

People were shocked to see climbing prices on Delta and American Airlines as they tried to book tickets for themselves and family members to get out of the potential path of the storm, while Spirit outright canceled a flight leaving St. Thomas before the storm hit there.

Airline customers took to social media to vent their frustrations, after trying to handle their own evacuations as effectively as possible. 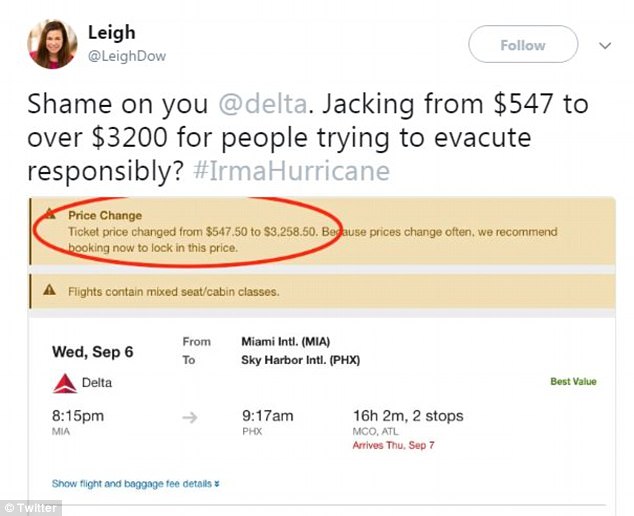 Leigh Dow says she saw this dramatic jump, but later said Delta assisted her after she vented about the price jump on Twitter 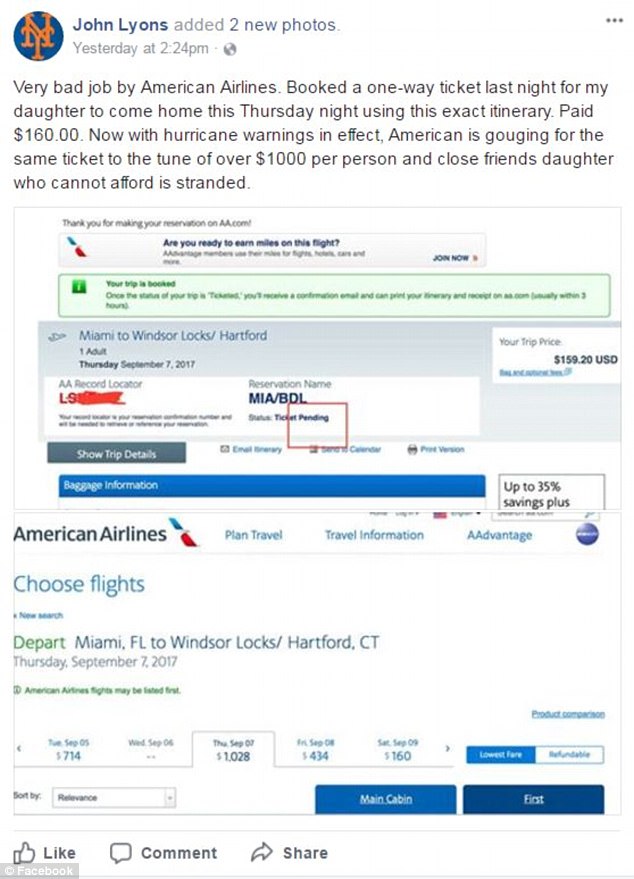 Two hours later she tweeted she had spoke to Delta and they were able to assist her.

She took to the social media network to say:  ‘Delta reached out & helped tremendously. Note to travelers, always call airline directly if something doesn’t look right.’

John Lyons, whose daughter goes to school at the University of Miami bought his daughter a ticket home to Boston at a reasonable rate on Monday evening at around $160.00, according to Yahoo.

He went to see about a ticket for his daughter’s roommate Tuesday was shocked to see how much it had jumped.

Not all people trying to fly were lucky enough to get flights at any cost. 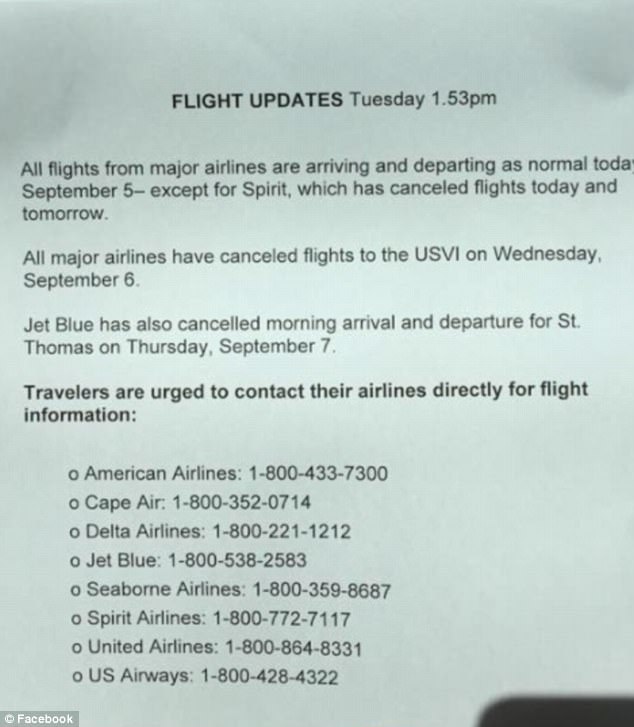 Klaudia Harris she tried to book a flight but ended up having to stay at The Westin Resort with her family as Irma came toward the island chain.

Her mom found a flight that went through Puerto Rico costing aorund $5,000 but by the time she went to book, the itinerary was gone

‘We went to the marketplace yesterday and bought necessities like water, sandwich meat, bread, milk, cereal. We cooked meat for meals yesterday because they turned off the gas this morning.’

‘If you think the world is not nice anymore, you should come to the US Virgin Islands during a hurricane,’ Harris said. She added ‘you’ll change your mind.’

Vincent Magenti told Yahoo he is stranded in St. Thomas with his girlfriend and eight family members after Spirit Airlines cancelled their flight out on Tuesday from Cyril E. King Airport heading back to Fort Lauderdale.

According to the notice at his hotel, Spirit was the only major airline to cancel flights in and out of St. Thomas on Tuesday.

On Wednesday many of the airlines decided it best to change their fee schedule for people trying to get out of the Hurricane’s path.

JetBlue told Yahoo they will charge a maximum of $99 up to the last available seat for direct flights and a maximum of $159 for connecting flights.

American Airlines said they too would cap fares for those flying out of the storm.

‘While there are limited seats remaining before the storm hits, we will cap our pre-tax fares at $99 for MainCabin seats on direct, single leg flights out of Florida for tickets sold through Sunday Sept. 10 for travel until Sept. 13,’ a spokeswoman said in a statement to Yahoo.

Delta followed similar suit and said they would be reducing flight costs for last minute travels, and would also be adding flights.

‘We also are adding flights and increasing the size of the aircraft we’re using on flights to and from San Juan and south Florida, providing more opportunities for customers to leave. New flights are being added to and from San Juan, Miami, Palm Beach, Fort Lauderdale and Key West, all to Atlanta (where people can connect to destinations across the US)’ a spokesman told Yahoo.