The military commander who orchestrated rescue and recovery efforts in Hurricane Katrina gave a damning assessment of the government’s response to Harvey.

In a blistering interview, Russell L. Honore described the military’s treatment of the catastrophe as ‘amateur hour’ and said those at the top needed to take control of recovery missions rather than leave them in the hands of overstretched local authorities.

There are only 73 helicopters in Texas carrying out search and rescue missions over huge portions of the state.

100 high water vehicles are out searching for survivors, 8 para-rescue teams have been mobilized along with three C130 propeller planes and hundreds of boats.  On Wednesday, Texas Governor Greg Abbott asked for another 10,000 Texas National Guard troops to be deployed, bringing the total to 24,000.

It is an increase the original contributions. Since Harvey made landfall on Friday, it has set the pace for military deployment.

Gradually over the weekend and at the beginning of the week, more resources were deployed by the military and civil agencies. One official at the Department of Defense told DailyMail.com that the same growth was mirrored by other agencies including FEMA and Border Patrol.

‘The level of support has been evolving and increasing across the board,’ the unnamed official said.

But Honore, who is credited with saving thousands of lives in New Orleans, said this was a fundamental flaw and that more help should have been sent when the first warning signs came.

‘The American people have put too much confidence in us. We have been too successful overseas to come out in amateur hour and incrementally deploy the force.

‘Something is seriously wrong with our control and command. There comes a point in time with the mission that it is too big for the state national guard and they need to get the hell over it and bring in the big dogs when you’ve got a big mission.

Honore is in Texas helping with rescue efforts. He has been warning the government to ‘scale up’ its response to the disaster – which has so far wiped out 48,000 homes – for days.

As Hurricane Katrina approached Louisiana in 2005, 10,000 troops were mobilized and on the ground before it made landfall. On Thursday, the military said another 30,000 troops were ‘standing by’ to join the 24,000 called up to deal with Harvey. 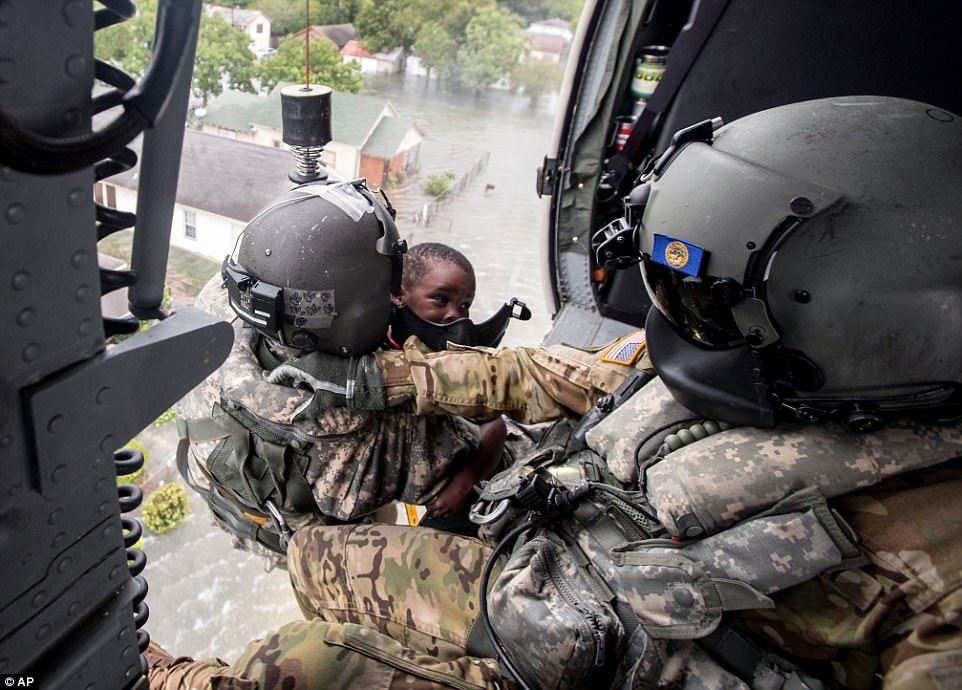 Only 73 helicopters are operating in Texas to help rescue evacuees from the flood water. It is four times the number deployed to Katrina by this stage in the catastrophe. Above, Staff Sgt. Lawrence Lind and Sgt. Ray Smith save a boy from Port Arthur on Wednesday 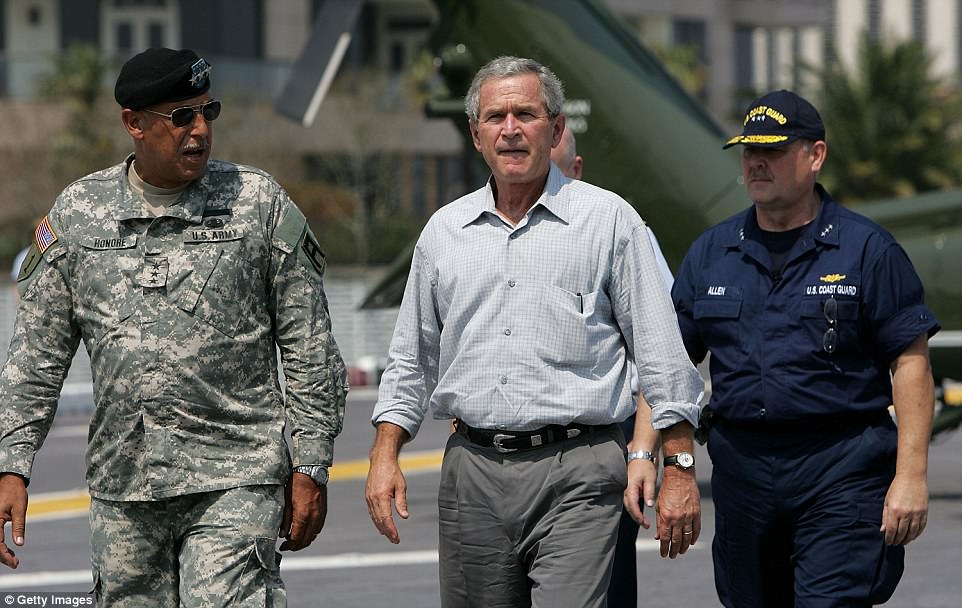 Honore is pictured above with George W. Bush in new Orleans in September 2005. He said the response to Harvey has been comparatively poor and that proper strategies are not being enforced 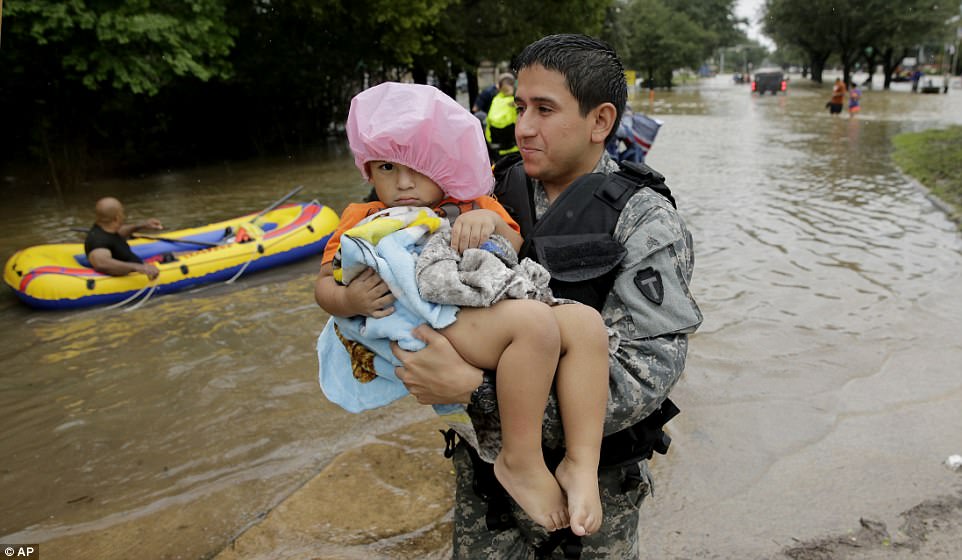 There are 14,000 National Guard troops deployed in Texas with another 10,000 called up on Wednesday by the Governor but Honore says it is still not enough 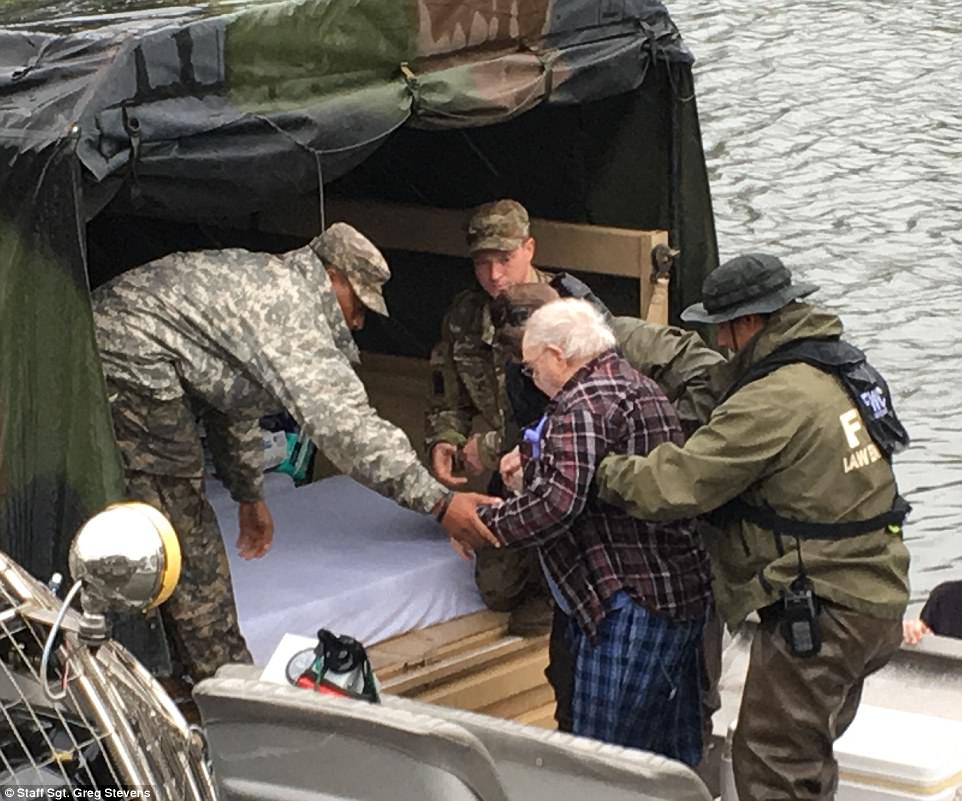 Louisiana National Guard help an evacuee on to a boat. There are 3,000 additional federal soldiers on the way to Texas

President Trump visited Texas on Tuesday after spending the first few days of the hurricane praising looking efforts and marveling over the size of the beastly storm.

He was generous in his praise of Governor Greg Abbott and commended Texans for their ‘spirit’ during his time in Corpus Christi – one of the first areas to be hit. After waving a Texan flag for crowds of fans who had gathered to see him, he moved on to Missouri a day later.

Honore said those in charge were hasty in their self-congratulations.

‘They need to stop patting each other on the back while these poor people are out here waiting to be rescued,’ he said, adding that he hoped other governors or mayors did not look to the response to Harvey as an example.

Honore slammed officials who are ‘patting themselves on the back’, saying the mission in Texas is anything but a success so far

‘I hope the guy in Miami or Tampa is not listening and thinking this is a success because it is not.’

Texan firefighters and police officers are working 48 hour shifts and napping on cots in evacuation shelters while thousands of Good Samaritans continue to put their own lives at risk to rescue neighbors, friends and strangers.

There are thousands of Good Samaritans using their own boats and cars to rescue people who are stranded and help has also poured in from other states and cities.

After Katrina, the military produced a study describing how it would ‘do business differently’, Honore said. Its focus was on how officials at a federal level needed to support state authorities when disasters like Harvey struck.

It included a grid system devised by the air component of Northern Command which instructed how to search a vast area for survivors or victims. It ought to have been used in Harvey, Honore said, but there is still no sign of it.

‘After Katrina, the component of the northern command wrote and curated a significant grid system for search and rescue. I don’t know where that is. It don’t look like anybody in Texas read that plan. 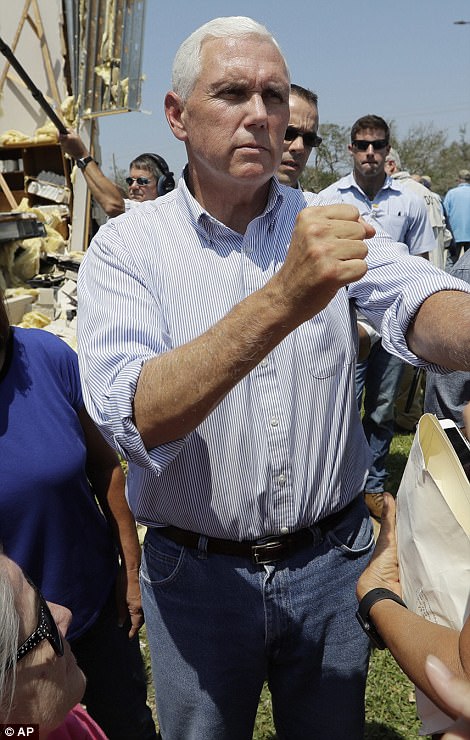 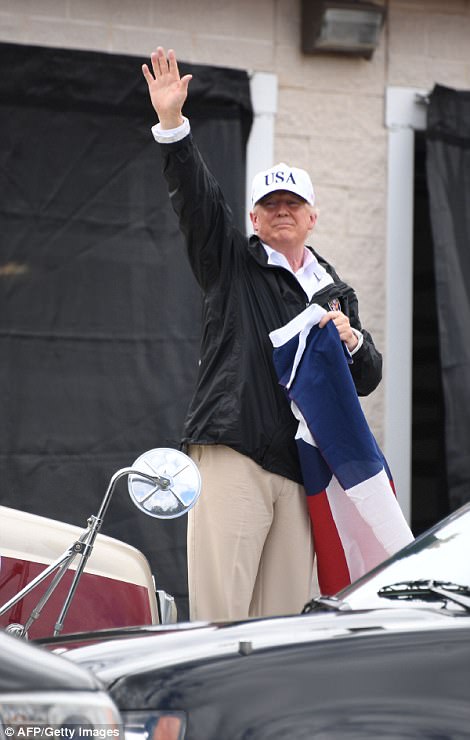 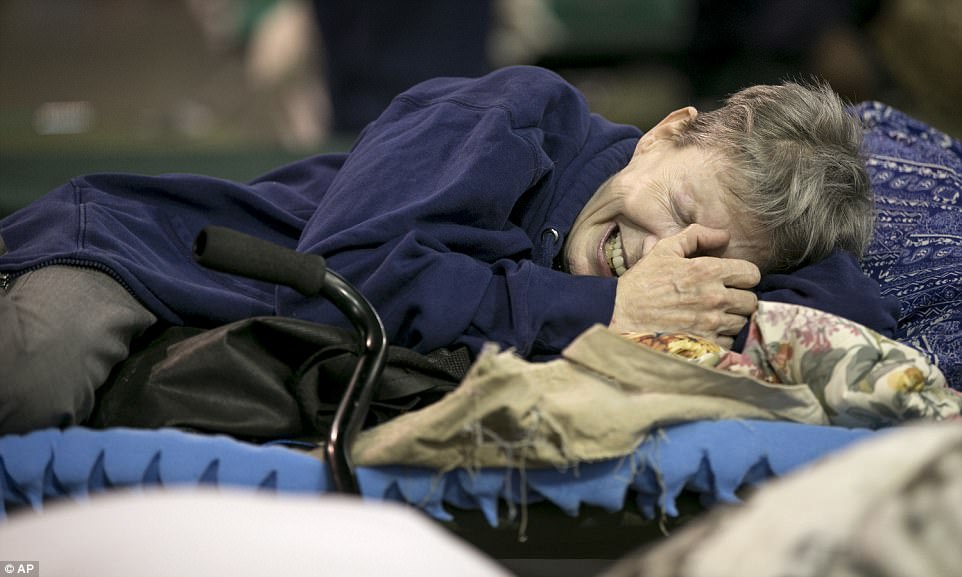 Honore said Texans were ‘hanging by the thread of their lives’. Above, evacuee Janice Forse cries at the emergency shelter in Beaumont, Texas. ‘Even Katrina wasn’t this bad,’ she said 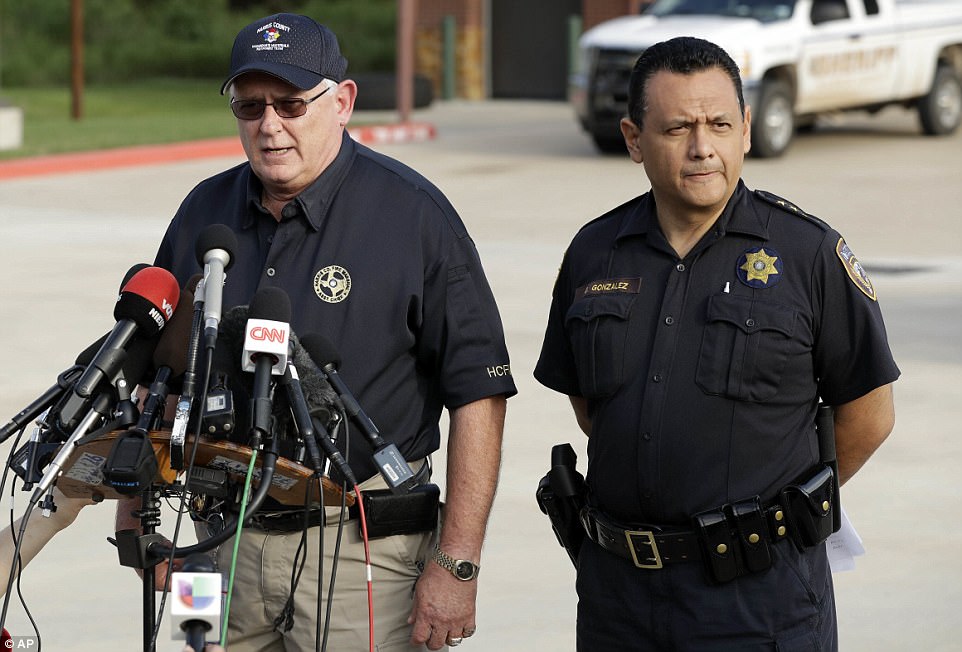 ‘We need to get back and get back to that doctrine that was supposed to be supervised by 5th army and North Com because now we’ve got 50 different state solutions as to how we mark a house as being cleared or whether we forward deploy assets or we wait until the storm is over with. We’ve got to fix that,’ he said.

The Army was inundated with complaints after Hurricane Katrina but most lay with Corps of Engineers, the division responsible for river levees which burst and led to some of the most catastrophic flooding.

There was an increase of the number of troops deployed to Louisiana after Katrina in 2005. By the end of the mission, some 70,000 had been sent to help.

Northern Command is headed by General Lori J. Robinson who has made no public statement on the disaster. FEMA acting administrator Brock Long has made several statements publicly.

At a press conference on Thursday, Homeland Security Adviser Tom Bossert ensured help would be given to Texas as it was requested by local officials.

Vice President Mike Pence arrived in Texas on Thursday to meet with evacuees and offer his support to Governor Abbott.

There were calls this week to implement Honore as the new head of FEMA. He was inundated with compliments from fans who demanded President Trump consider him for a position in the administration.