Charlotte Strecker stunned doctors by beating five bouts of an incredibly rare tumor – but it was the horrific treatment side effects, 100lb weight gain, depression, and battle to survive Hurricane Katrina that changed her life.

The 46-year-old, of Tyler, Texas, was first diagnosed with stage 3 adrenal carcinoma – a rare disease of the gland located on top of the kidney – in January 1999 after experiencing symptoms, such as high blood pressure, nausea and vomiting, and pain on the right side of her back.

The then-27-year-old thought she was out of the woods after undergoing surgery to remove the tumor, she had no idea she’d be dealing this disease for the next decade – as well as living through one of the worst hurricanes to ever hit US soil.

Despite adrenal cancer being rare with a very poor prognosis, Charlotte’s doctors were more concerned with the side effects of her cancer treatment – which caused her to gain 100 pounds.

Charlotte, who beat the cancer in May 2005, explains what it felt like to battle her weight gain and cancer at the same time.

Charlotte Strecker, who gained 100 pounds during her cancer treatment, dropped all of the weight by April 2011 after her cancer went into remission six years prior 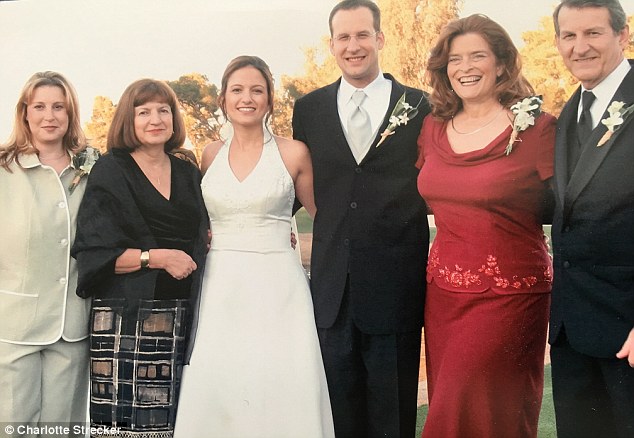 Adrenal cancer is rare impacting an estimated 200 people in the US each year, according to American Cancer Society. The five-year survival rate for someone  diagnosed with stage 3 cancer, meaning that the tumor has grown into nearby tissue or has spread to nearby lymph nodes, is 44 percent.

Signs and symptoms of the disease are usually caused by the hormones – estrogen, androgen, aldosterone or cortisol – made by the tumor. They include excess production of facial and body hair, muscle cramps, high blood pressure, fat deposits behind the neck and shoulders, and irregularities in menstruation.

Charlotte was in her last year of pharmacy school when she began experiencing symptoms like high blood pressure, nausea and pain that radiated to the right side of her back in August 1998.

‘It felt like I wasn’t getting enough oxygen or air to my kidneys,’ she said. ‘That’s the best way I can describe the pain.’

She went to urgent care three times to deal with the sharp pain, but doctors would only prescribe her pills to treat abdominal spasms.

However, she wasn’t too worried until she went to her obstetrician-gynecologist in December who expressed a lot of concern over her blood pressure reading which was 160/110.

Her doctor said her level was too high for someone her age, and indicated that she was at risk of a heart attack and stroke.

Charlotte got a second opinion from her step-grandfather, who was a physician. After confirming that her blood pressure was abnormally high, he referred her to one of his colleagues who was an oncologist.

‘I think it’s funny that he referred me to an oncologist,’ said Charlotte, adding that her step-grandfather’s colleague would eventually diagnose her with cancer. ‘Maybe he had an idea what it was, but just didn’t tell me.’

They set up an appointment with the oncologist in early January who ordered an ultrasound on Charlotte’s abdomen that revealed she had a tumor the size of a cabbage ball sitting on her kidney. They discovered that the tumor was malignant.

‘It was really weird,’ Charlotte said. ‘I was basically like “OK, let’s do what we have to do so I could get back on with my life.”‘

She didn’t realize this ordeal would span more than a decade in which she would gain 100 pounds due to cancer treatment, endure one of the most disastrous hurricanes of all time, and be left unable to have children.

Charlotte underwent surgery on January 17, 1999 to remove the tumor. She thought she was out of the woods and ‘everything was fine’ as subsequent scans showed no cancer cells over the the next 18 months.

However, in March 2000 she started experiencing nausea.

She wasn’t sure it was cancer though, because her routine CAT scans showed no recurrence.

But in July 2000, the scans revealed that the cancer came back and this time it was the shape and size of a hot dog.

‘That was a jaw dropping moment,’ she explained.’That made me realize that this wasn’t going to go away easily.’ 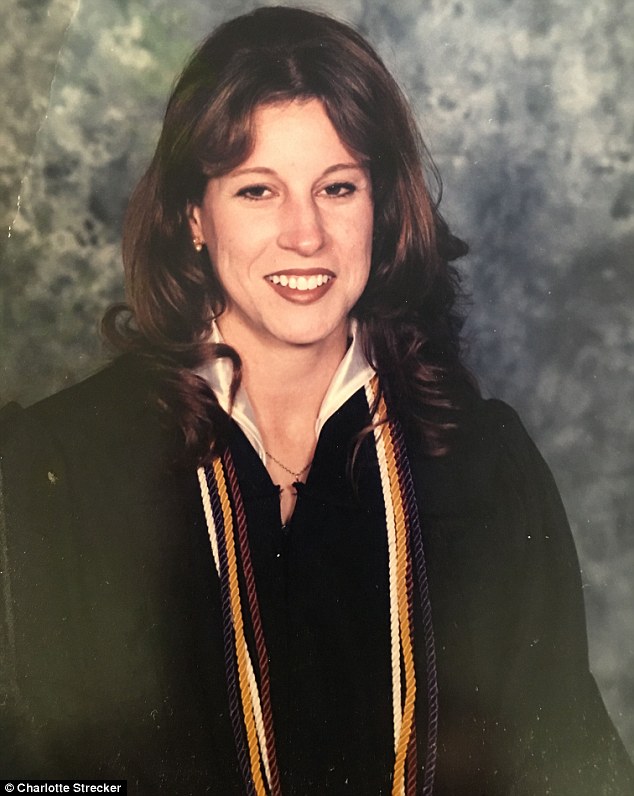 Charlotte, who lived in Louisiana at the time, opted to go to the world-class MD Anderson Cancer Center in Houston, Texas for treatment. She underwent a second surgery two-and-a-half weeks after her recurrence to remove the adrenal gland tumor.

Once again, Charlotte thought she was in the clear until a routine scan in October, three months later, revealed the cancer came back a third time.

She said that although surgery was the only way to cure this form of cancer, chemotherapy was the next option since surgery didn’t seem to be effective.

‘I was excited to start chemo because I thought “well, surgery didn’t work yet, maybe this will do the trick,”‘ Charlotte explained.

She tried to remain optimistic throughout the ordeal, but felt at some point that the cancer just ‘won’t go away.’

As to why the cancer kept recurring, doctors suggested that Charlotte, who’s a self-proclaimed ‘worry wart’, manage her stress better, since they believed that may be contributing to its recurrence since adrenal glands are involved in the production of cortisol – which helps the body respond to stress.

Charlotte was prescribed oral chemotherapy and steroids to treat the third recurrence of the adrenal carcinoma.

She took a medical leave from her pharmaceutical job in Walmart and moved back to New Orleans from Texas three months after starting chemotherapy treatment.

[When I was first diagnosed], I was basically like ‘let’s do what we have to do so I could get back on with my life’

Although she went into remission in May 2001, just months after starting treatment, she remained on the drugs.

The cancer was gone, but Charlotte was physically weak and constantly sick due to treatment.

‘I could only eat a little thing of mashed potatoes per day,’ she said. ‘The smell of certain things triggered nausea… even brushing my teeth.’

By the end of 2001, Charlotte, who weighed 150 pounds when she started treatment, was barely 100 pounds.

‘I was very frail, I couldn’t keep anything down… I spent all day vomiting,’ she explained.

After seeing how thin she was becoming, doctors decided to increase her steroid dosage in an effort to improve her appetite – these drugs are used in a number of ways in cancer treatment including destroy cancer cells, reduce an allergic reaction to certain drugs and to curb nausea and vomiting.

Charlotte was eating more due to the steroids. She frequently woke up in the middle of the night for sugary snacks. In addition to this, Charlotte was also drinking whey protein shakes. 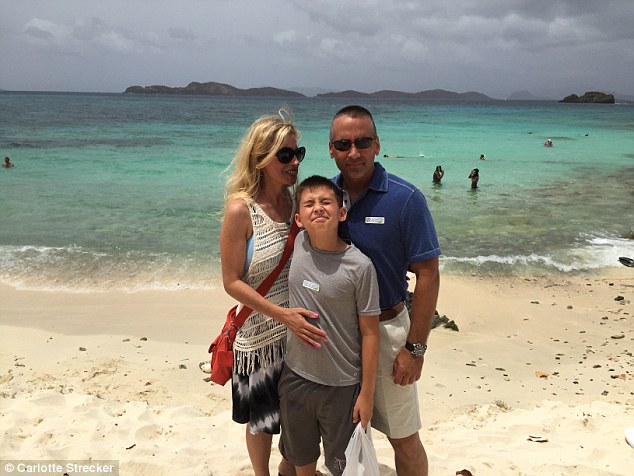 ‘I didn’t notice the weight gain,’ she said. ‘It wasn’t until December 2002 that my then-husband took a picture of me for a Christmas card. I looked at it and I was like “oh my God that can’t be me.” I was floored.’

The steroids definitely played a part in the weight gain, but so did her depression.

‘I was emotionally drained and exhausted from the recurrences,’ she says. ‘I felt like there was no end in sight.’

Charlotte, who got married in July 2003, spent the following months distressed about her weight gain, but she was even more heartbroken when the cancer came back a fourth time in August 2003 while she was still receiving chemotherapy treatments.

‘Emotionally and physically… I was just spent,’ said Charlotte. ‘I was trying to move on with my life and I had just gotten married… I didn’t expect to deal with this again.’

The cancer went away shortly after doctors increased her chemo dosage.

However, when it returned two years later in May 2005, the doctors opted to surgically remove the tumor.

Despite this being Charlotte’s fifth time being diagnosed with a rare tumor with a very poor prognosis, her doctors were more worried that she was still 200 pounds.

Although she wasn’t suffering from any weight-related health issues at the time, her doctors were worried it would become an problem later on.

At the time, her doctor was fairly confident that they would get rid of the cancer since it was the smaller than the tip of a pin – smallest it the tumor had ever been – and they could ‘see its blood source’ or what was feeding it. 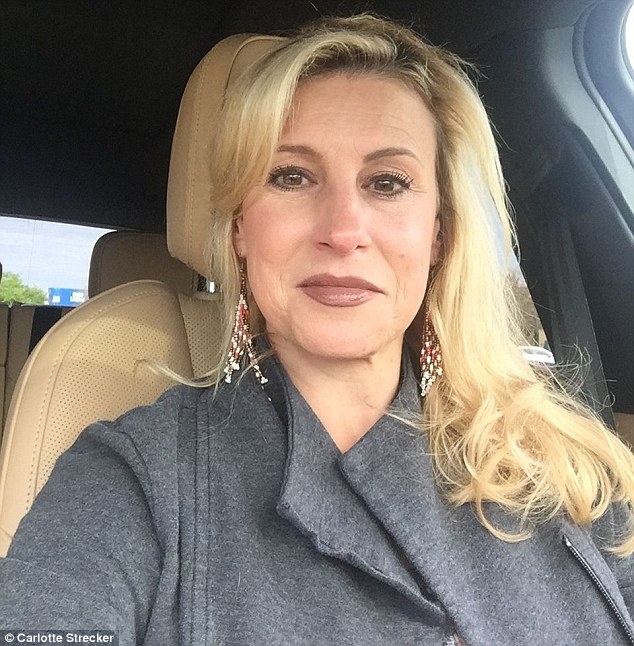 The 46-year-old, who has been cancer free for 13 years, said that she was emotionally drained and exhausted from the disease recurrences

‘They were sure that they would be able to sever it once and for all,’ she explained.

A week before her third surgery to remove the tumor in May 2005, she was taken off steroids. And after the procedure she stopped taking her oral chemotherapy medication.

Charlotte, whose husband at the time was on disability, was struggling financially, but she went to the doctor the following month for her routine scan which came up clear.

‘A negative CT scan is like winning the lottery for a period of time,’ she said.

As soon as she stopped taking steroids the weight began to fall off, and Charlotte started to regain her confidence.

However, she was worried the financial stress, as well as the anxiety she had while evacuation her home near the ocean to flee Hurricane Katrina would contribute to another recurrence.

But scans following the hurricane in August 2005 revealed she was clear.

Her monthly scans turned to yearly then bi-yearly scans. And those also revealed no signs of recurrence.

‘That was a big milestone for me,’ said Charlotte, who, at some point, didn’t think the disease will ever go away.

Charlotte, who moved back to Texas and is newly engaged after divorcing her first husband in July 2007, is sharing her story to inspire others.

‘It was not an easy journey, but it was actually a blessing in disguise,’ she added.