Hurricane Sandy is the second most powerful hurricane in modern history, with its might exceeding even that of Katrina, according to a measurement of the hurricane’s strength in relation to its size.

Researchers have found that Sandy’s Integrated Kinetic Energy index, or IKE, which quantifies the power of a hurricane based on how far out tropical-storm force winds extend from the center, ranked second only to Hurricane Isabel in 2003.

Hurricane Sandy’s IKE was 140 Terajoules, which was about 20 Terajoules higher than Katrina’s, according to Brian McNoldy, a senior researcher at the University of Miami’s Rosenstiel School of Marin and Atmospheric Science. Record-setting storm: Hurricane Sandy was more powerful than Katrina, but its might was more spread out, researchers say

‘Sandy’s IKE was over 140 Terajoules (TJ, 1 TJ = 1 trillion Joules = 277,778 kilowatt hours), meaning it generated more than twice the energy of the Hiroshima atomic bomb,’ McNoldy wrote on a blog published by the Washington Post.

‘At any given moment, many hurricanes contain more energy than an atomic bomb in their surface winds alone (even excluding winds at higher elevations and latent heat energy),’ he added.

The category levels that are more widely cited to quantify the power of hurricanes purely measure wind speed. Katrina was measured as a Category 3 hurricane at landfall and later rose to a Category 5. 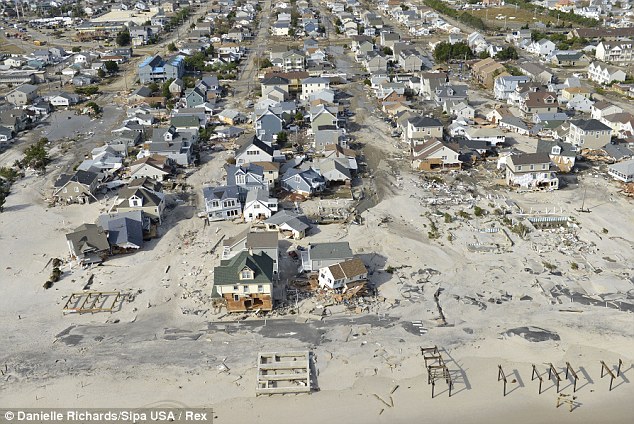 The estimated cost of Hurricane Sandy is $20 billion 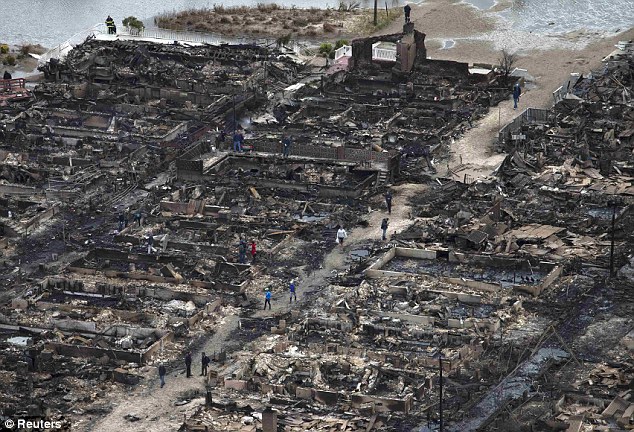 Residents walk past burned houses in Breezy Point, a neighborhood located in the New York City borough of Queens, after it was devastated by Hurricane Sandy

Sandy, meanwhile, was measured as a Category 1 hurricane at landfall.

But Sandy may end up being the second costliest hurricane in history after Katrina because of its high IKE, McNoldy noted.

‘Sandy had Category 1 winds at landfall yet was able to create very significant storm surge over hundreds of miles of highly populated coastline,’ he wrote. 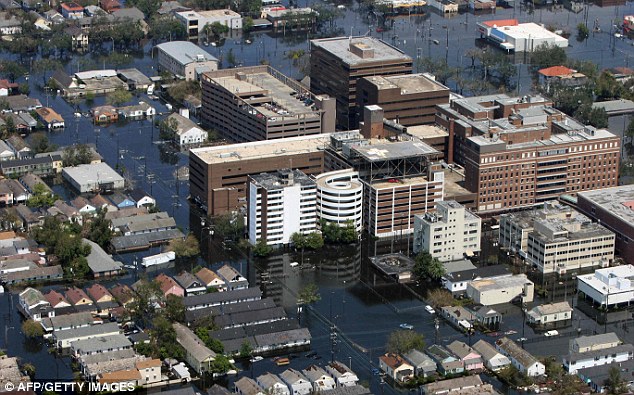 Sandy has been estimated to cost at least $20 billion in damage, whereas Katrina cost roughly $106 billion.