Bella Doolittle was simply not convinced when her doctor told her last February that, at age 59, she had early-onset Alzheimer’s disease and only eight years to live.

‘I asked him to check me to see if I had a tumor instead. He said “no, you absolutely have Alzheimer’s,”‘ Bella says.

A spirited wife, mother of four, college coordinator and human and animal rights activist, Bella had never been the type to let anything slow her down, but she was suddenly confronted with a diagnosis that would do just that.

Her husband, Will, is a newspaper columnist at the Glens Falls Post Star in New York, and suggested to Bella that they document the many subtle changes she was beginning to go through via a podcast called The Alzheimer’s Chronicles, which debuted in November.

The couple says that before Bella was diagnosed, she might not have been the type to allow her life to be seen – and heard – so publicly, but the disease has begun to change her personality and their entire relationship.

Will (left) and Bella Doolittle (right) during a family trip to Italy in the spring of 2015, a trip that coincided with their 25th wedding anniversary

As Bella’s symptoms worsen, she is being forced to take on a new identity, and she refuses to be ashamed of it.

This is a point she makes repeatedly, and it is hard to tell if she has forgotten what she has said, or if she is just reiterating this important, emotional statement. It may be some of both.

It’s also the reason that she was willing to undertake the podcast with Will.

‘I miss the parts of Bella that are vanishing, but on the other hand, there’s an essential-ness to our relationship now, which is nice. There’s not a lot of extraneous stuff, just this kind of connection that we have,’ Will says.

‘Isn’t that sweet? he’s so wonderful to me. It’s true, too, what he’s saying,’ Bella chimes in.

Since they started doing the podcast, Will says the couple has received an outpouring of support.

He recalls one particularly moving email, which included a quote he could not entirely remember, but that felt poignant to the new normal he and Bella are now living in.

The quote he was referencing was Mizuta Masahide’s haiku: ‘Barn’s burnt down – now I can see the moon.’

Will says coping with Bella’s disease is a bit like that: ‘It’s a big change, but it’s not necessarily all bad.’

I’m upset because I don’t want to die and leave my husband and my children and my animals, but I’m not embarrassed that i have Alzheimer’s

Bella Doolittle on refusing  to be ashamed of her diagnosis

Bella is accustomed to being busy. Just shy of 60, she is bubbly, vivacious and proud of her youthful looks.

‘I don’t have any wrinkles yet!’ she brags.

She and Will have raised her two biological children, Ginny and Travis, now in their 30s, as well as two adopted daughters, Zoe and Tam both 21, while both working full time, she as a campus student life coordinator at North Country Community College, and he at the Glens Falls Post Star.

When they were not working or with their children, the couple kept their hands full with their dog and rabbit. 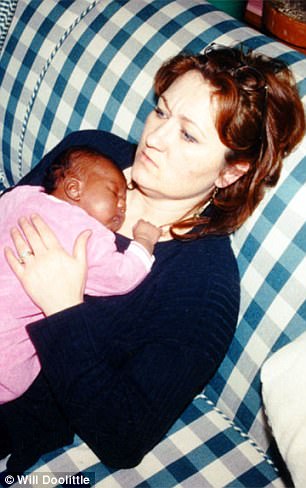 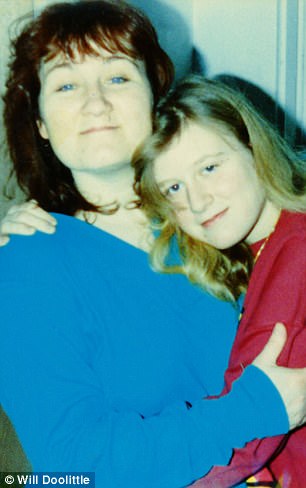 Bella and Will have four children together, including daughters Zoe (far left), now 21, whom they adopted in 1996, and Ginny (far right) now in her 30s

Bella is a self-proclaimed ‘type A.’ She has organized and marched in protests against domestic violence, to raise AIDS awareness and for women’s rights, and has historically been the one to pay the bills.

But about a month ago, Bella was forced into retirement.

‘I wouldn’t have done it if I’d had a choice,’ she says, ‘but they didn’t want a crazy person in the office.’

Bella is confident that she could have kept up her job, if not at the same pace, but she says her supervisor immediately began to press the subject of retirement once she disclosed her diagnosis last spring.

But, she admits that her perspective is not necessarily reliable any more.

‘I don’t feel the change. I know that I’m supposed to, and I am forgetful, no doubt about that, and I’m a little knuckle-headed, but people tell me I’m different.

‘I have to ask if I said something twice, it’s funny, it’s like your blinded to it,’ Bella says.

Will, she acknowledges, ‘has more insight on my behavior.’

‘Our relationship has changed, and I think that’s inevitable if a spouse is diagnosed with a disease that is, at some point or other, going to be fatal,’ he says.

He has watched Bella’s personality shift as well.

With Bella now retired, finances are tighter for the Doolittles, and Will has had to take on more responsibility.

‘We’ve always been a real partnership, and Bella’s been the leader of that partnership,’ Will says.

‘I was a good helper, but now I’ve got to take over and be the one to make sure things don’t fall apart,’ he adds.

As painful as it is for Will to watch his wife transform beyond either of their control, Will and Bella agree that some of the changes she has gone through are for the better, at least for now.

‘I used to be fairly bossy and demanding and I wanted everything to be the exact perfect way, and I just don’t have that desire any more,’ Bella explains. 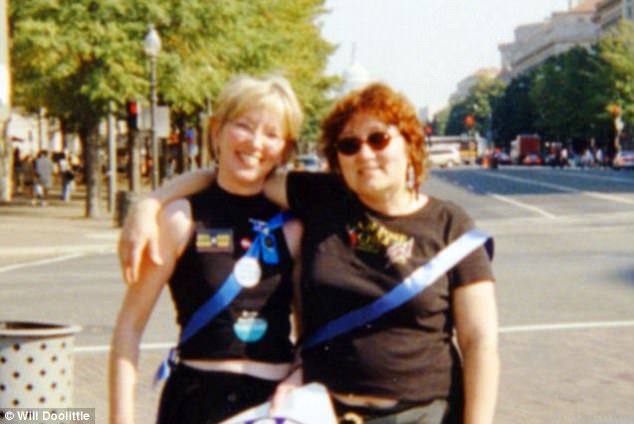 Bella (right) has always been engaged with social activism, including in this May 2006 photo of her during an AIDS march in New York City which she led for students at North Country Community College, where she worked

‘I didn’t decide it, I just stopped caring about having everything perfect, which is kind of a big deal because I was really an A type personality. But now, I’m friendly and nothing bothers me, it’s pretty odd.’

‘That change has become more pronounced over the last year,’ Will says.

Personality changes are among the most common symptoms of Alzheimer’s patients, but most literature warns families that they can expect irritability and aggression. For Bella, the disease has done the opposite.

‘I’ve come to kind of accept my diagnosis, since there is nothing else I can do,’ Bella says, ‘so I guess I’ll just embrace the person I’m becoming.’

Will, 57, has written a weekly column for the Glens Falls Post Star for decades, and over the years his family has made many appearances in his work, but not Bella.

‘I hadn’t mentioned her much [and when I did] it was “my wife,” because she didn’t want the publicity,’ Will says.

‘So I was surprised [by her reaction] when I asked her if she wanted to do a podcast. I expected she’d be against the idea. I think, perhaps, it’s part of a personality change, that she’s more open,’ he says.

I miss the parts of Bella that are vanishing, but on the other hand, there’s an essential-ness to our relationship now, which is nice. There’s not a lot of extraneous stuff, just this kind of connection that we have

Especially after feeling as though her employer’s attitude toward her was so changed by her diagnosis, Bella is newly motivated to step into the light.

‘I don’t think people should feel ashamed of things they have no control over,’ she says.

Bella neither looks nor sounds like what one would expect of a woman blighted by Alzheimer’s.

And yet, her doctor quoted her the same life expectancy of an average person diagnosed with early-onset Alzheimer’s: eight years.

‘I’m flabbergasted by the short amount of time they’ve given me,’ she says.

Though Bella remembers her conversation with the doctor on the day she found out why she was forgetting things, she struggles to place it in time.

Bella loses track of time, but Will keeps close count of the precious years they have together.

The couple decided over the holidays that they will take a trip to Scotland, probably sometime in the summer, so that Bella can ‘make a connection with the old country.’

The couple’s children, too, have changed the ways they interact with their mother.

Their oldest daughter, Ginny, keeps close tabs on Bella, talking with Will on the phone regularly.

‘Our two younger daughters have changed in more subtle ways, they are more attentive and sweeter,’ Will says.

‘And I can get away with things I didn’t used to,’ Bella says ‘I ate the whole pint of Ben and Jerry’s that was meant to be saved for my daughter, and she didn’t even get mad at me,’ Bella laughs.

Bella may be unable to work her old job, but she now plans to dedicate her time to fighting for animals rights, a cause near and dear to her heart, as well as continuing to offer a new view of her disease through the The Alzheimer Chronicles.