Husband and wife are arrested for brutal murder of Brazilian footballer

A Brazilian businessman and his wife have been formally charged with the brutal murder of football player Daniel Correa Freitas as a forensic report suggests the athlete might have been alive when his penis was cut off.

Investigators had already concluded that Edison Brittes should be indicted after he confessed on TV to killing the 24-year-old.

However, it was revealed on Sunday that detectives have now decided to seek a murder conviction against Cristiana, 35, along with procedural fraud and coercion of witnesses.

Prosecutor Joao Milton Salles said to Globo TV: ‘Following the analysis of the investigation, the conclusion I reached was that this homicide would never have happened the way it did without the decisive performance of Cristiana.

Cristiana, 35, allegedly led Daniel Correa Freitas to believe that the joke (of taking a picture next to her) would be harmless before he was brutally murdered by her husband

‘(She) allegedly led the player to believe that the joke (of taking a picture next to her) would be harmless (and viewed) in the circumstances in which they were taken.’

But the ‘hoax’ apparently backfired after Brittes, 38, ‘lost his temper’ when he saw Daniel lying in the same bed next to his wife.

He admitted to violently beating and killing the player after accusing him of raping his wife. Several other guests at the house party, there to celebrate Allana’s, 18th birthday, the couple’s daughter, were allegedly involved in the assault.

Salles continued: ‘(Cristiana) knew the character of her husband and his violent personality. When the murderous acts that culminated in Daniel’s death began, we believe she didn’t try to prevent (his) execution.’ 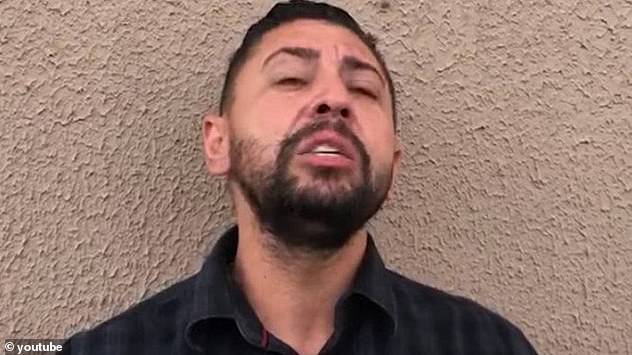 Cristiana’s husband, Edison (pictured), has confessed to murdering the 24-year-old. He says he caught the footballer raping his wife in their bedroom, while other guests partied in their house.

The family’s lawyer, Cláudio Dalledone, challenged the claims. He said: ‘Cristiana tried to prevent the player from being attacked. More than one witness heard her calling for help to stop (the crime).’

Investigators found traces of blood spatter on the walls and floor of the couple’s bedroom suggesting Daniel was beaten while still in the master bedroom. 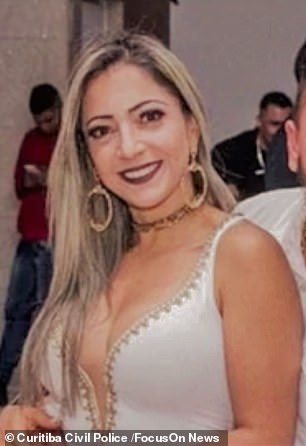 There were blood stains in the garage and in Brittes’s car and signs that attempts may have been made to clean up the evidence.

Experts confirmed the bedroom door had been broken but they could not determine when this happened.

Brittes initially said in his TV confession he had busted open the door with his shoulder. But during police questioning he changed his story, claiming he entered through the window.

A forensic report by Paraná Scientific Police and the Medical Legal Institute (IML) indicated the cause of the death was delivered with a ‘stab’ to the neck with an extremely sharp implement which ‘exposed the victim’s cervical spine … cutting deeply through the (upper) cervical muscle.’

The soccer player’s mutilated remains were discovered in a bush in São Jose dos Pinhais in Brazil’s southern state of Paraná on October 27. He had been partially beheaded with a sharp knife and his genitals dismembered with what was believed to be the same implement. 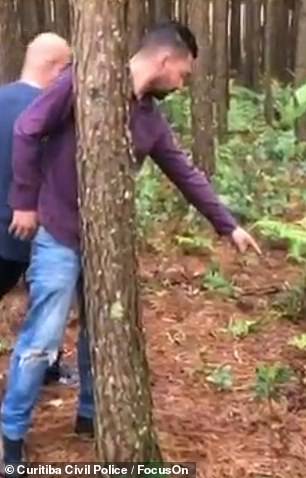 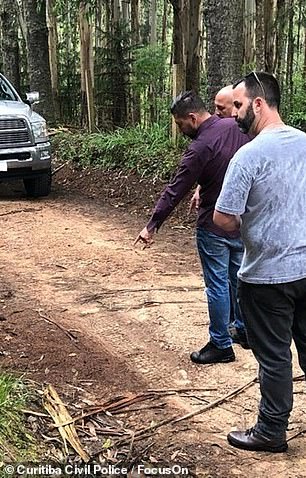 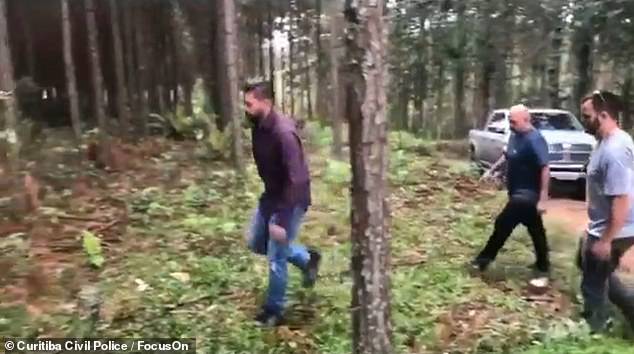 The victim’s genitals were recovered from a tree where it had allegedly been tossed.

Paulino Pastre, IML chief said to local media: ‘Our investigation reached the conclusion that emasculation most likely happened after the stabbing act, but it is not possible to specify the (exact) moment when this occurred. Whether it was before or after death.

‘The main characteristic is that the lesion (in the genital area) had little blood, little clotting. The blood was less significant in this region than in the neck.’ he revealed.

During his testimony, Brittes said he committed the murder alone and ‘dragged’ the body into the thicket by himself.

A video shows the suspect at the crime scene with detectives a few days after the body was found.

In the footage, Edison Brittes twice points to the wrong place where he dumped the body. On each occasion the detectives check with their colleague. In the final demonstration, a cop walks into shot and confirms with the suspect where the body was found.

The IML report indicated that: ‘Daniel’s body was carried by more than one person to the place where (it) was found.’ 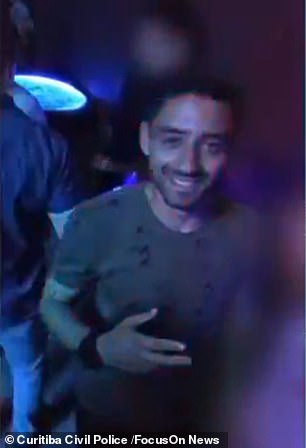 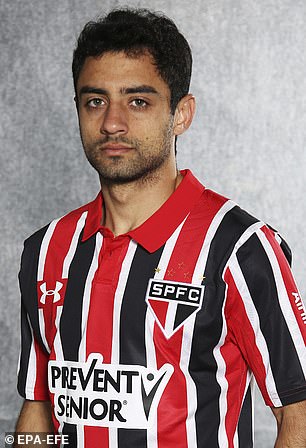 Cops said they do not believe Daniel raped or attempted to rape Mrs Brittes, whose younger daughter aged 12 is now being cared for by neighbours

Pastre said: ‘Dorsal, thoracic and thigh injuries from Daniel’s body point out that (at least) two people carried the player (to the area).’

Seven people have been arrested on suspicion of being involved in the murder. According to cops, Eduardo da Silva, 19, Ygor King, 19 and David Willian,18, participated in brutalising and torturing the player. They were allegedly in the car that took the athlete to his death in the forest.

Also imprisoned are teenage daughter Allana, indicted by police for coercion of witnesses and procedural fraud, and Eduardo Purkote,18, who is accused of serious bodily harm.

Cops said they do not believe Daniel raped or attempted to rape Mrs Brittes, whose younger daughter aged 12 is now being cared for by neighbours.

Detective Amadeu Trevisan, investigating the case, said the killing was disproportionate to the alleged crime and toxicology reports indicate the victim was too drunk to ‘carry out a sex attack’.

Before being killed, Daniel had partied with the family at a nightclub in Curitiba on October 26 at the birthday celebrations. He had then reportedly been invited to continue the festivities into the following day at the family’s house.

In the early hours of the morning Mrs Brittes, allegedly told cops she woke to find ‘the athlete rubbing his erect penis on (my) body’.

Dalledone said: ‘Cristiana confirms that she suffered sexual abuse without penetration by (Daniel) who rubbed his erect penis on her.

‘(At the time) she was drunk, asleep and thought it was a dream. She saw him on top of her and started screaming.’

After been severely battered, Daniel was bungled half naked into the boot of the family car and driven to a forest area some 20km (12miles) from the house.

On the way, forensic investigators believe he must have heard his own ‘death sentence’ as Brittes became increasingly angry after discovering messages on the São Paulo star’s phone in which he claimed he was going to ‘eat the mother’ of the birthday girl, and the father was also there.

The footballer was born in Juiz de Fora in the state of Minas Gerais and marked his debut playing for Cruzeiro. At the age of 19 he started playing for Botafogo and soon emerged as a skilled attacking midfielder scoring five goals in 2014.

But after he broke ligaments in his right knee a series of injuries hampered his chances of holding a place in the senior team.

He still had a great deal of potential and was transferred to São Paulo in 2015 but following an unremarkable stint with the team he was loaned to Coritiba in 2017.

From the beginning of this year he played for Ponte Preta and then São Bento, both teams are in Series B of the Brazilian Championship.

However, he was plagued with injuries and had been off the pitch for two months. He was released by his club to spend a weekend in Parana. It was during this time away that he went to the party and met his tragic end.