A jilted husband has been banned from flying for five years by a budget airline after he spilled secrets from the private diary of his air hostess wife telling of her sexual exploits with colleagues.

The 48-year-old mother-of-four had kept an intimate diary on her computer during her time working for Dutch low-cost airline Transavia, which is owned by KLM/Air France.

She revealed details she had sex with numerous colleagues, including details of romps on planes and during stopovers at rest places and hotels.

A jilted husband has been banned from flying for five years by a budget airline after he revealed details from his air hostess wife’s diary telling of her sexual exploits with colleagues. Stock photo

But two years ago, the diary was discovered by her husband, who was furious to learn of her infidelity.

He passed the document to members of the media and also confronted male crew members over the revelations in the diary on two occasions.

The man, who is now divorced from the air hostess, confirmed he had been banned from flying with the airlines after ‘a tussle with a Transavia pilot’ in 2015.

He said: ‘His name was in the diary. I also have audio tapes. The pilot filed a criminal complaint, but the case was closed by the judiciary with a settlement.’

After the man sent excerpts of the diary to the media in 2016, his wife went to court to try and have the full release of the diary blocked. 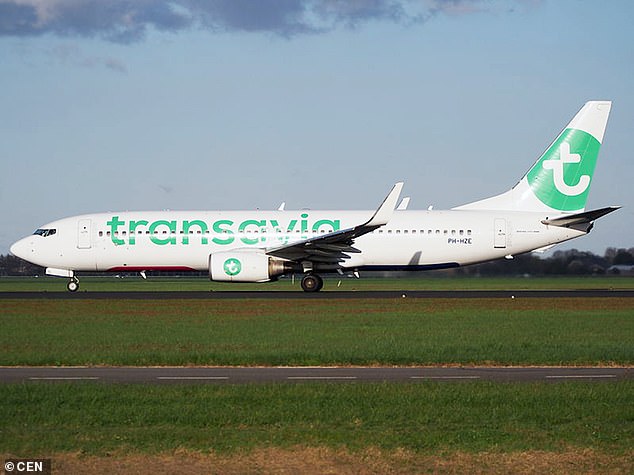 The 48-year-old mother-of-four had kept an intimate diary on her computer during her time working for Dutch low-cost airline Transavia. File photo

She was backed up by Transavia as it felt the reputation of its staff, including a number of married pilots, as well as that of airline itself, was at stake.

But the case never went before a judge as the man managed to reach an out-of-court settlement with his ex-wife not to publish.

A Transavia spokesman said: ‘Because of the defamation and abuse of our personnel he has been banned from flying for five years.’

The spokesman added: ‘We take everything very seriously. An internal research has shown that the safety of passengers was never in doubt.

‘Our colleagues consider those emails as unwanted and unacceptable as they harm our interests.’