A husband last night told how he ‘lost the will to live’ after his wife drowned their two-year-old twins in the bath.

Samantha Ford, 38, killed little Jake and Chloe on Boxing Day last year after her split from their father Steven a few months beforehand.

The distraught parent, 36, said he begged police to tell him it wasn’t true after learning about their murders.

‘I will never forget that day, I just lost the will to live. I pleaded with them to tell me, “This isn’t true, this hasn’t happened”. I was almost begging them to tell me this wasn’t real,’ he told The Sunday Times.

Doting father: Steven Ford (with little Jake and Chloe) said he ‘lost the will to live’ after his wife drowned their two-year-old twins 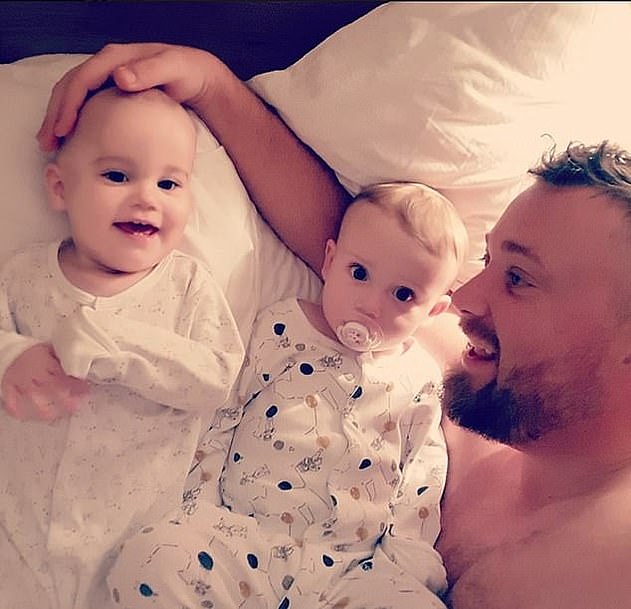 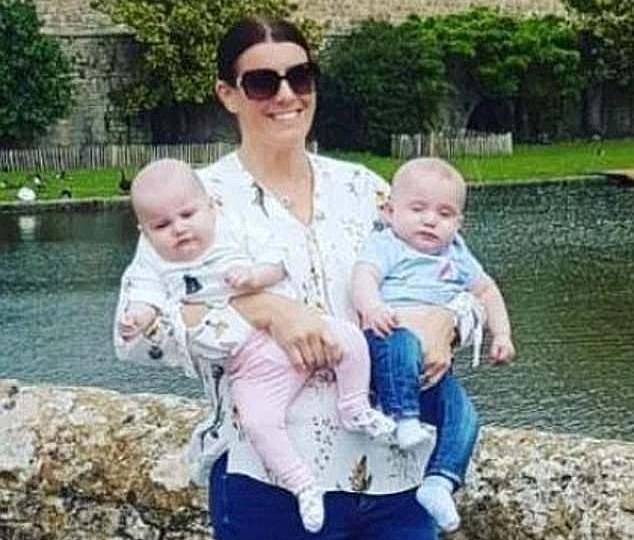 Samantha Ford, 38, killed their children last December before trying to take her own life, but was unsuccessful

‘To lose one child is horrific. To lose both your children is torture. But to lose your children because the other person that was supposed to protect them with their own life had taken theirs is incomprehensible and something I’ll never come to terms with.’

The distraught father, who had longed to be a parent, said the day the twins were born was the best of his life.

‘I was floating… It’s amazing. It’s your own flesh and blood, in front of you. And I had that twice.’

Mr Ford said the birth of the twins gave his life purpose and he was willing to drop everything and devote all of his time to them.

But his world was ripped away from him in the early hours of December 27 last year.

His wife drowned the 23-month-old children in the bath following the breakdown of their marriage before attempting to kill herself by driving her Ford Galaxy at 100mph into the rear of a lorry without a seatbelt. She was suffering from acute depression. 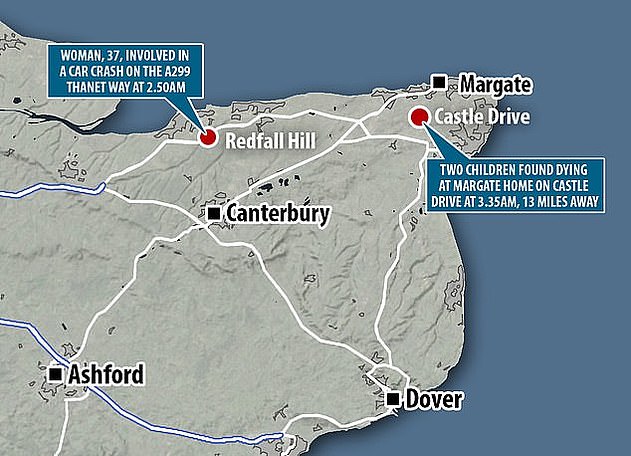 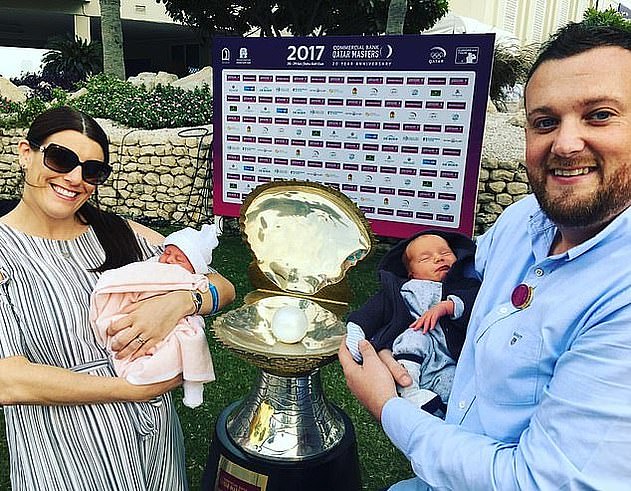 Mr Ford, (pictured right) her husband of five years, said the day the twins were born was the best day of his life

When police managed to open the doors of her vehicle, she told them: ‘I’ve killed my babies. Please let me die.

‘I put them in the bath. We were meant to be together. I was going to jump off a cliff but it’s too dark.’

While she was taken to hospital, police attended the address she was renting in Castle Drive, Margate, where they found the two toddlers in their bedroom in nappies and clean, dry baby grows.

Attempts were made to revive them, but rigor mortis had already set in.

While in hospital, Ford was described as hysterical, screaming: ‘I wouldn’t hurt them, they’re my babies. This is a dream.’ She reportedly asked staff to throw her off a cliff.

Ford denied murder but admitted two counts of manslaughter on the grounds of diminished responsibility at a hearing in May. 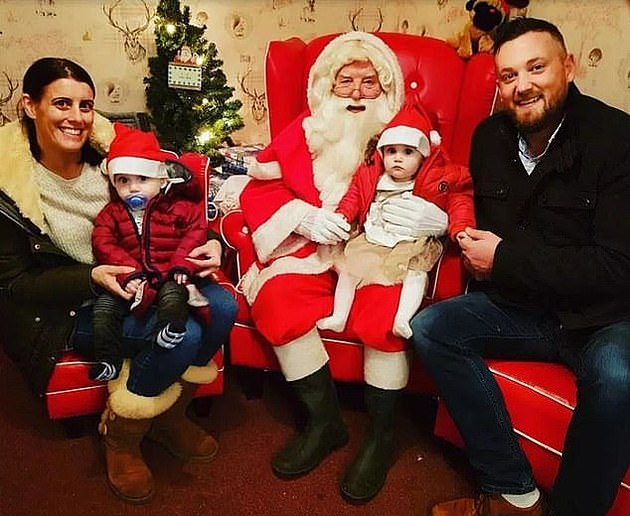 Ford (left), her husband Steven (right) and the twins posing with Santa

At her sentencing hearing on Friday, the Old Bailey heard that Ford and her husband had spent the first 10 years of their marriage living in Qatar and their children were born by IVF while living there.

But the relationship turned sour after they returned to the UK in early 2018 and moved to the village of Charing in Kent, the court heard.

Ford was angry at leaving her affluent lifestyle in the Middle East, the Old Bailey heard, and was said to be trying to pressure her husband into returning to Qatar – leading to their split in November 2018.

In one message to Mr Ford, she said: ‘You have ripped my world apart now we are nothing but a miserable, broken family growing up in a shit hole.’

Relatives said Ford’s mental health declined rapidly following the separation, and she sent multiple text messages to her estranged husband trying to persuade him to return to her, the court heard.

The court heard that her mental health declined rapidly following the separation and she made multiple internet searches of different methods of suicide.

She also googled terms such as ‘young mum kills herself’ and ‘mum drowns her two children and then commits suicide’.

Brenda Campbell QC, for Ford, said there had been 76 communications between Ford and mental health services in the weeks before the killings.

By Christmas, her family decided that her mental health was so poor that Mr Ford should take the twins and bring them back on Boxing Day, the court heard. 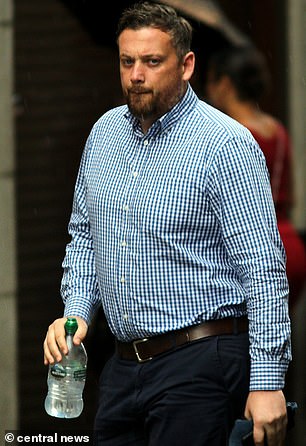 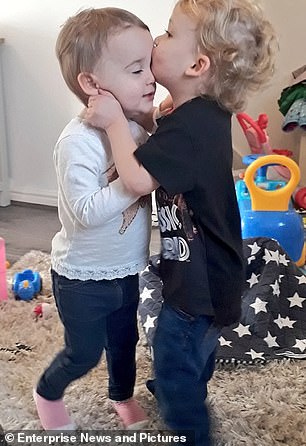 Ford drowned them later that evening after her parents had left the house.

In a victim impact statement, Mr Ford said he thought his children would have been ‘terrified, confused and that they suffered’ in death.

He said: ‘This was the most heinous, spiteful act on two innocent children. I have no doubt [Ford] did this with the intention of taking her own life and punishing me in the process.’

He added: ‘I know how she behaves when things don’t go her way and when she doesn’t get what she wants.’

‘It’s an extreme version of her character because she couldn’t get her own way – knowing how much I loved the children she knew it would be the ultimate punishment for me not going back to her.’

Dr Muzzaffar Hussain, a consultant forensic psychiatrist treating Ford at the Trevor Gibbens Hospital in Maidstone, Kent, said her actions could be attributed to a ‘narcissistic rage’ at her perceived humiliation at the hands of her husband.

‘There’s a sense of being mocked by him that played a role,’ he said.

He said Ford had been experiencing a ‘homicide/suicide fantasy’, saying: ‘That, I think, was in play as a way of retaliation and of punishment of Mr Ford for leaving her – a sense of ‘this is what you made me do’.’

The court heard that while in hospital, Ford had talked of voices telling her to kill the children – claims she had not made before she was hospitalised.

‘Unfortunately I think it’s a wish to appear more severely ill than she is,’ he said.

‘I don’t deny that she is ill but I think there’s a wish to come across more severely unwell than she is and there’s a part of that that’s coloured the narrative a little bit.’

Mr Justice Edis is due to pass sentence on August 16 after evidence from further psychiatric witnesses.