Husband of Luton woman murdered by her sister

Chilling footage reveals the moment a woman tries to convince police that she had tried to save the life of her dying sister – minutes after she had stabbed her to death.

Officers are shown arriving at the family home of Saima Khan to find her sibling Sabah outside, seemingly distraught after discovering her sister’s fate.

When a police officer asks why there is blood on her arm, she claims to have wounded herself on ‘glass’ which was shattered on the floor after a supposed break-in.

Sabah, 27, was jailed for life today after she launched a 23-minute knife attack on her sister at their Luton home in May 2016 after luring her home from work.

She had been having a four-year affair with Saima’s husband Hafeez Rehman, who revealed his ‘shame’ over the adulterous relationship and that ‘not a day goes by’ that he doesn’t ‘regret it’.

Sabah lured her older sister home under the ruse her children were crying, before slashing her throat with such ferocity that she almost decapitated her.

Hafeez Rehman had taken advantage of the opportunity to sleep with both siblings and gain ‘exclusive rights’ over his sister-in-law, the Old Bailey heard 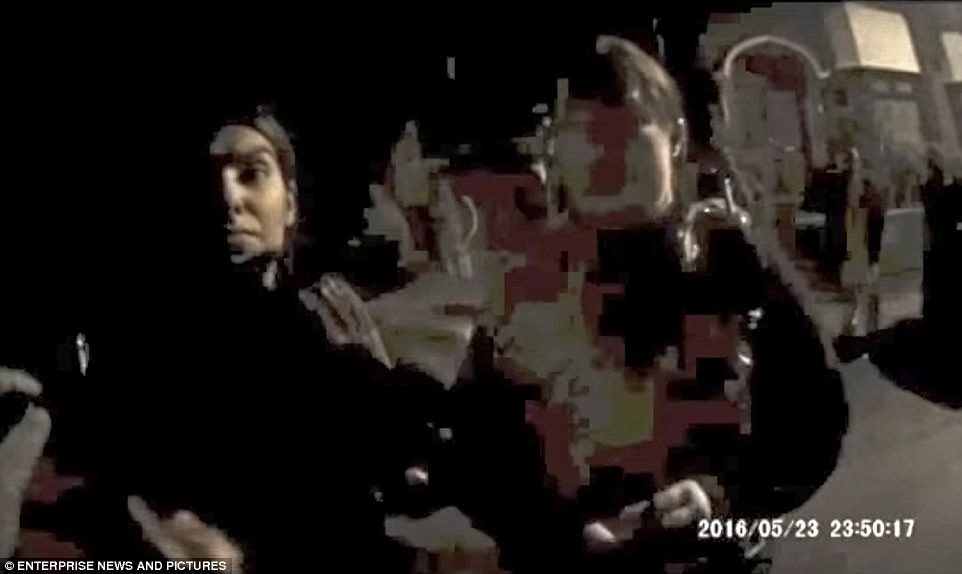 Officers are shown arriving at the family home of Saima Khan to find her sibling Sabah outside, apparently distraught

Over some eight minutes, Sabah chopped off her sister’s hand and pulled off her clothing to continue stabbing her as she lay dead, while her children were upstairs.

Some of the children woke up as the ‘scene of carnage unfolded’ and Saima’s seven-year-old daughter shouted down to her aunt: ‘Are you killing a mouse?’

Sabah Khan had been in a relationship with her sister’s husband for four years and they had been having sex in his taxi and their home when his wife had gone to work. He was 21 when he met Sabah, and she was just ten.

The court also heard how the younger sister had undergone an abortion after becoming pregnant by Hafeez.

Mr Rehman had taken advantage of the opportunity to sleep with both siblings and gain ‘exclusive rights’ over his sister-in-law, the Old Bailey heard.

The statement from Mr Rehman said: ‘I feel complete shame about having an affair with Sabah. I never imagined anything like this would ever happen. Sabah’s actions have left our four children without a mum.

‘I have four beautiful children but I have lost my world and I cry every day. Saima was there for all four children. She did everything. There is not a day goes by when I don’t regret my affair with Sabah.’ 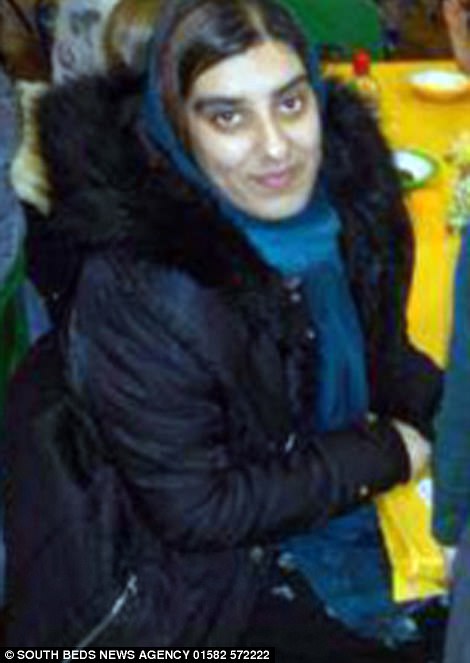 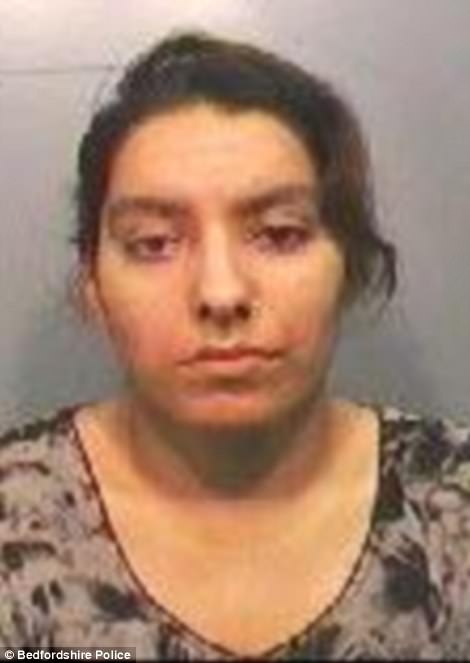 Saima Khan, 34, (pictured) was brutally murdered by her sister (right). Her hand was chopped off in the attack and her throat cut with such ferocity she was early decapitated 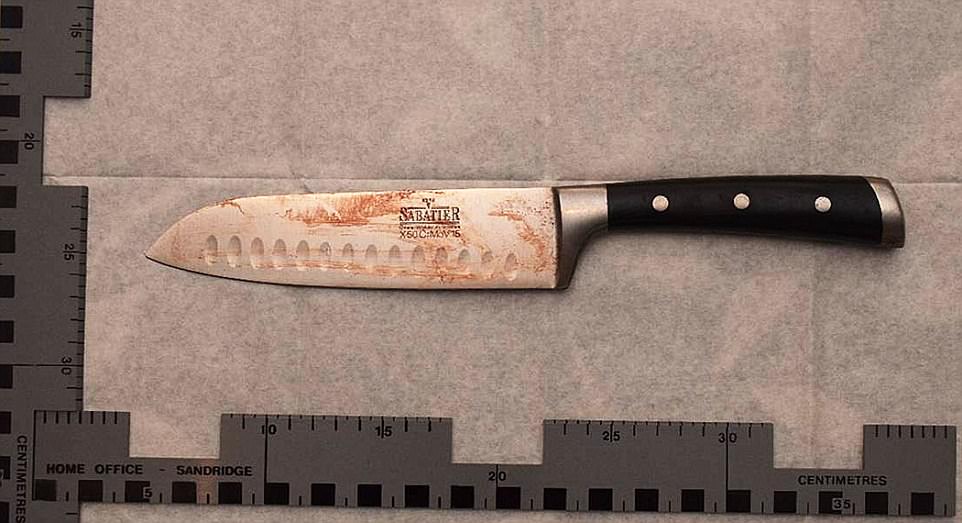 Khan butchered her older sister with this kitchen knife, and continued to stab her after she was dead 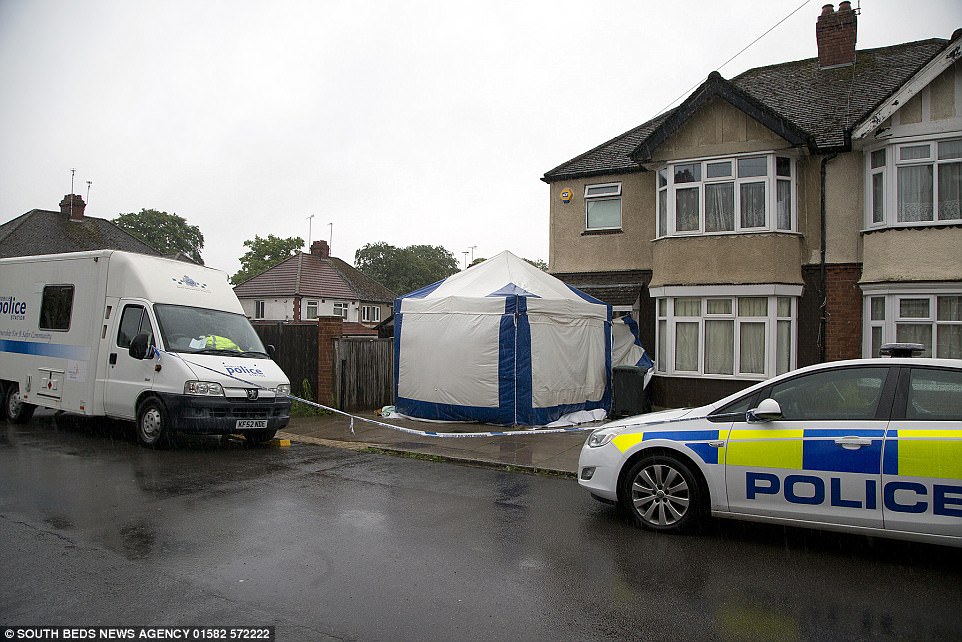 Detective Inspector Adam Gallop described the murder as a ‘horrific crime’. Pictured, police at the Khan’s house in Luton

As Sabah Khan was jailed for the ‘astonishingly brutal’ attack, it emerged that:

Sabah Khan conducted a number of chilling internet searches as she planned to murder her sister.

Internet search history on the family computer found Khan had searched ‘how long does a Muslim funeral take’ and had spent months searching online for ways to kill someone.

One search term read ‘Where to buy poisonous snakes.’

Another astonishing search term that officers found read ‘Sixteen steps to kill someone and not get caught.’

But it was also discovered that Sabah Khan had been in touch with a mysterious figure back in Pakistan, described in court as ‘a fixer’, who she paid for advice and guidance on how to kill her sister.

Saima’s four young children were upstairs as she was murdered by her sister, who had bought a knife from a Tesco store two days earlier.

She waited until their family were out of the house attending a funeral at a local mosque before texting her sister to say one of her children was crying and she should come home quickly.

Saima suffered 68 knife wounds in the frenzied attack, with severed arteries and a jugular vein and deep wounds to her arms, skull and face.

Other members of the family found the mother-of-four lying in a pool of blood when they returned late at night.

The court heard their screams ‘rang out’ across the neighbourhood.

Sabah attempted to stage a burglary at the scene, smashing a window and interfering with jewellery before calling police claiming there had been a burglary and her sister had been murdered by an intruder when she was in the shower.

Detectives initially investigated her claims before arresting her eight days later when they found the knife in a bin bag in her bedroom.

On the night of the murder, Sabah remained at home to look after her sister’s children – a seven-year-old daughter, two sons aged four and two and a baby girl, who had just had her first birthday.

Prosecutor Jane Bickerstaff QC said Saima left the house around 10.15pm to attend the home of an elderly woman in her role as a carer that night.

Half an hour later Sabah texted her sister to say one of the children was crying. 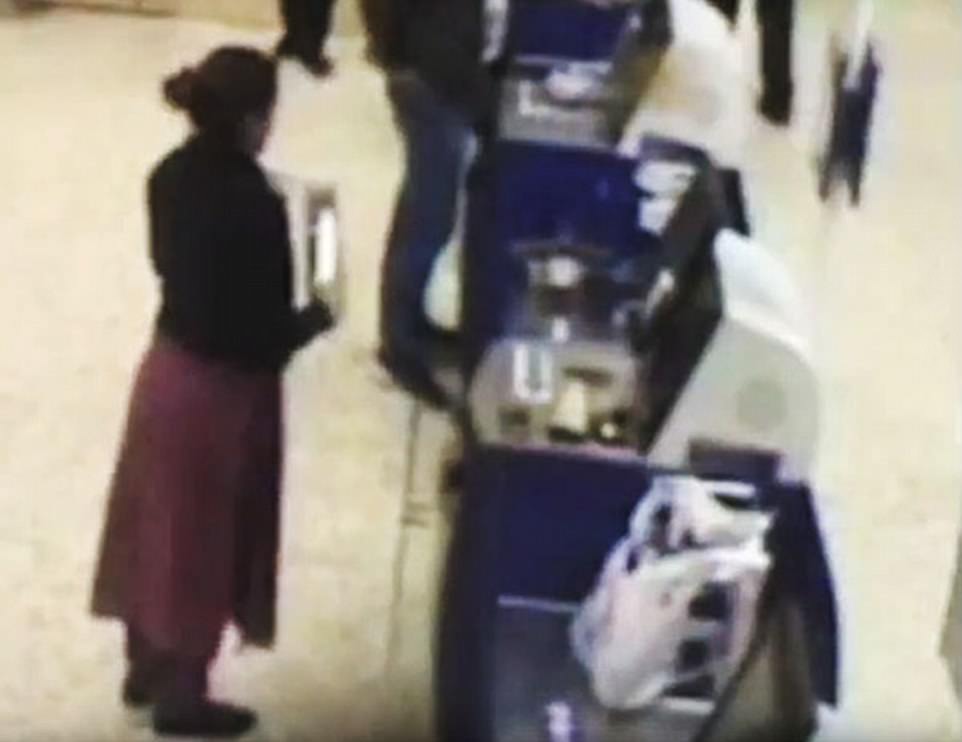 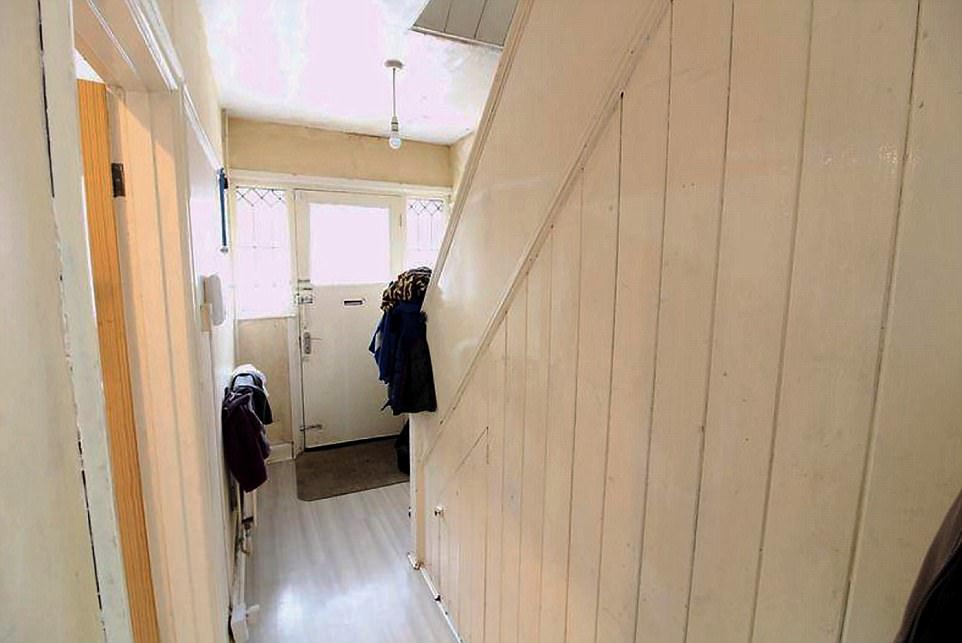 Mother-of-four Mrs Khan was found with her hand severed and throat cut in the hallway of the property on May 23, 2016 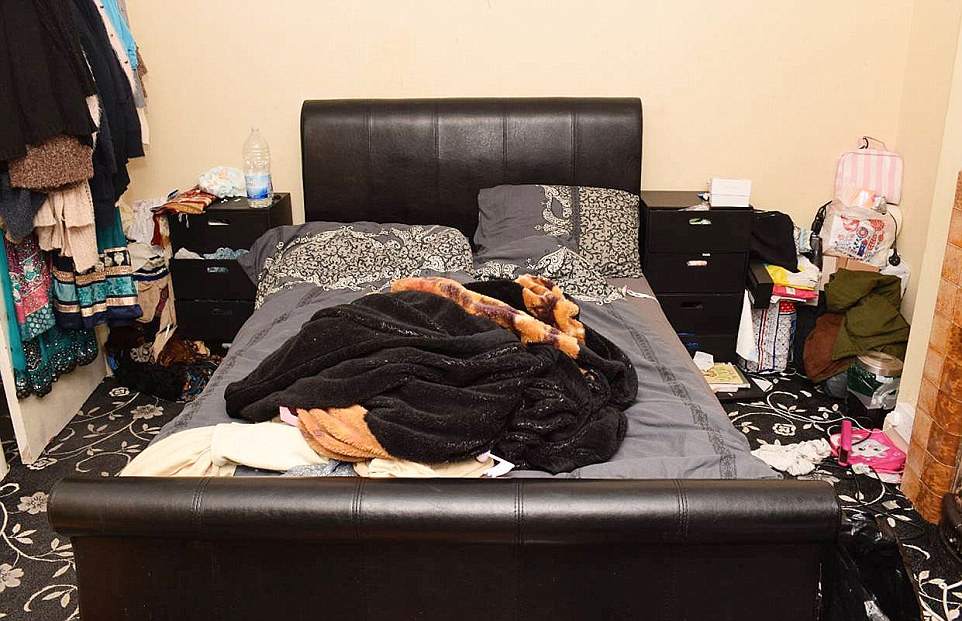 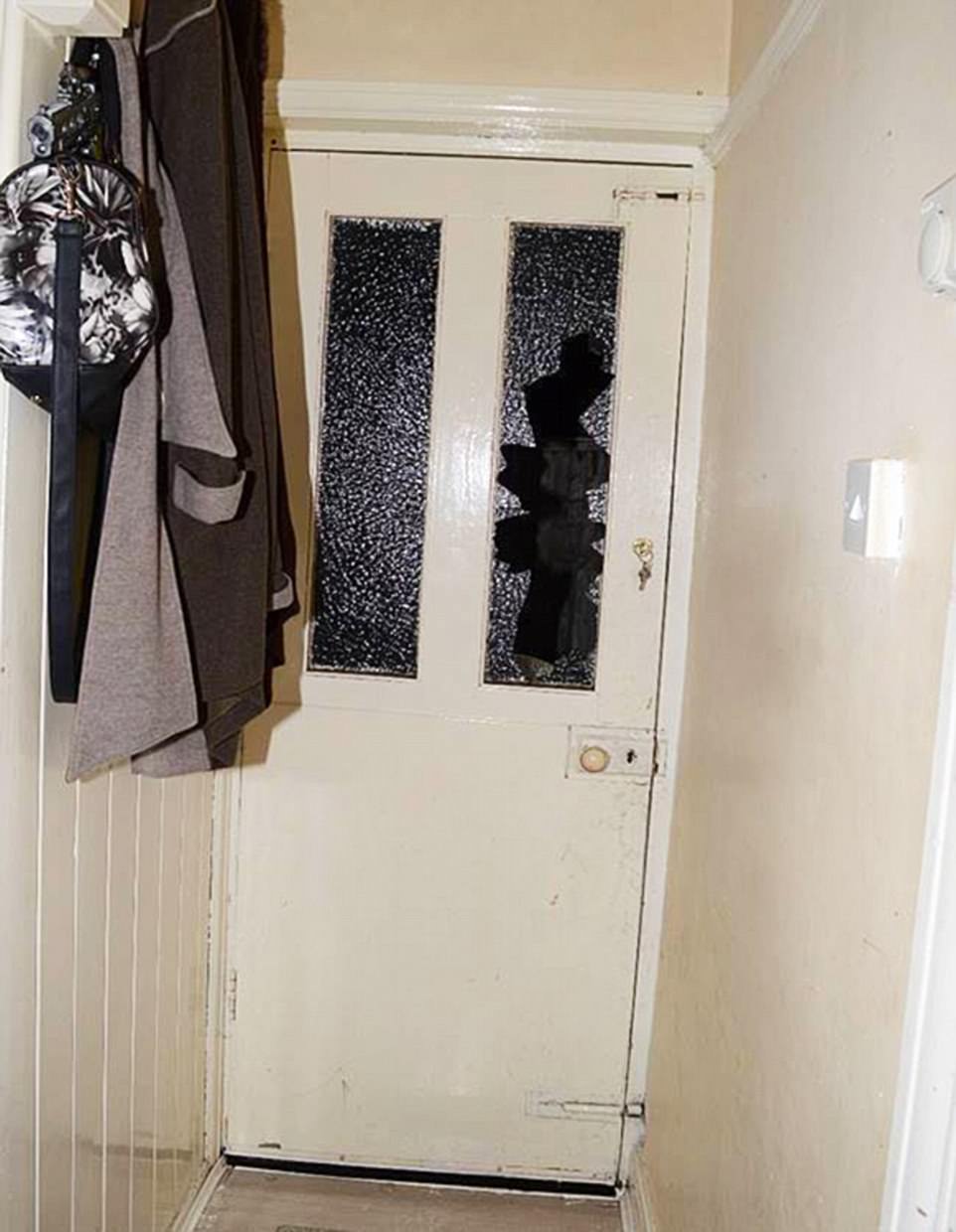 Sabah attempted to stage a burglary at the scene, which detectives initially investigated before arresting her eight days later

HUSBAND ‘REGRETS’ AFFAIR WITH HIS SISTER-IN-LAW

In a statement from Hafeez Rehman read to the court, he paid tribute to his wife and srevealed his regret over his affair with his sister-in law’

He said: ‘I feel complete shame about having an affair with Sabah.

‘I never imagined anything like this would ever happen. Sabah’s actions have left our four children without a mum.

‘I have four beautiful children but I have lost my world and I cry every day. Saima was there for all four children. She did everything.

‘There is not a day goes by when I don’t regret my affair with Sabah.’

He said his eldest daughter would never be able to understand why their auntie had killed her mother.

Paying tribute, the cab driver said: ‘My wife Saima was a lovely, caring, kind, wife and mother. She was quiet but loved laughing and joking within the family.’

He added: ‘There are so many questions which will be left unanswered.

‘The ones who are suffering the most are my children as they have lost the most important woman in their life, their mother.

‘They are too young to understand fully what has happened.’

The court was told a CCTV system on a neighbouring property captured the moment Saima arrived outside her home and showed her entering the property at 11.07pm.

Miss Bickerstaff said: ‘The lights were seen going on at the house.

The prosecutor said that had been the moment when Sabah Khan struck as she waited in the darkness.

Miss Bickerstaff said: ‘She lay in wait for her sister and 45 seconds after Saima got into the house, she was murdered in the hallway.

‘There is no evidence that she ever managed to leave that area by the front door.

‘It was a vicious and sustained attack.’

She referred to her sister as ‘that b***h’, and told Mr Rehman: ‘If I could I would take my heart out and show you what you are for me.

‘Nothing in the world can change my feelings for you. Not even you … Day by day my love for you gets stronger.’

Ms Bickerstaff said: ‘From February, all was not well with Hefeez Rehman and his affection appears to have been transferred back to his wife.’

Around this time Khan searched the internet for ‘poisonous snakes’, ‘how to hire a killer’ and ’16 steps to kill someone and not get caught’.

She was also in frequent communication with a ‘fixer’ in Pakistan and handed him over £5,000 to have her sister ‘finished off’ and ‘done in’.

She told the fixer: ‘Sorry to bother you again and again. My friend is really upset now Hefeez does not even look at her ….he says he realises his mistake … You finish off Saima as quick as possible so Sabah can get her Hefeez back.’

The prosecutor said there was an added time pressure as her sister and her family were due to move out later that month. 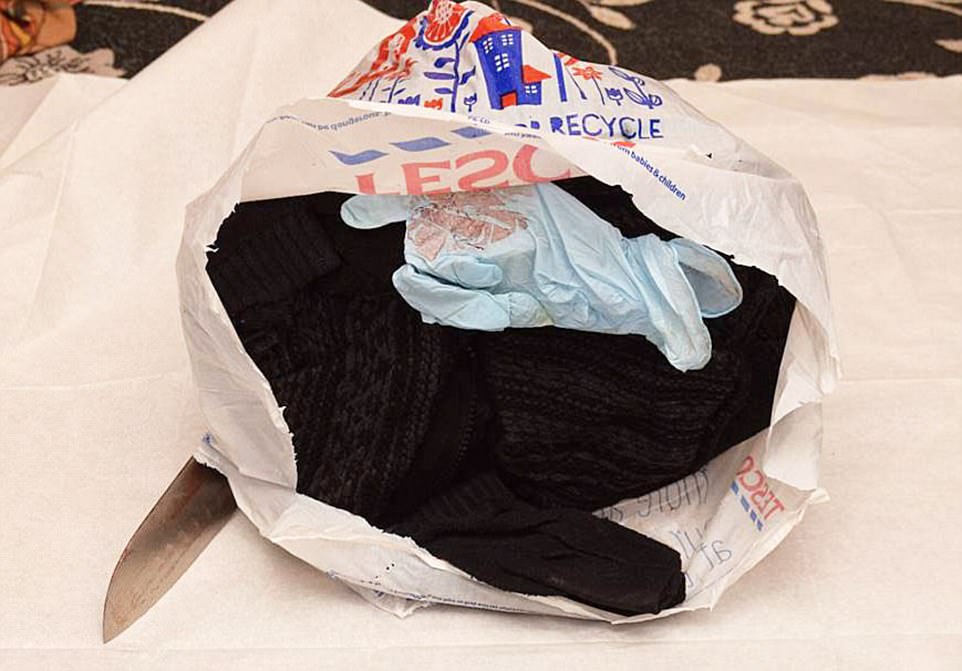 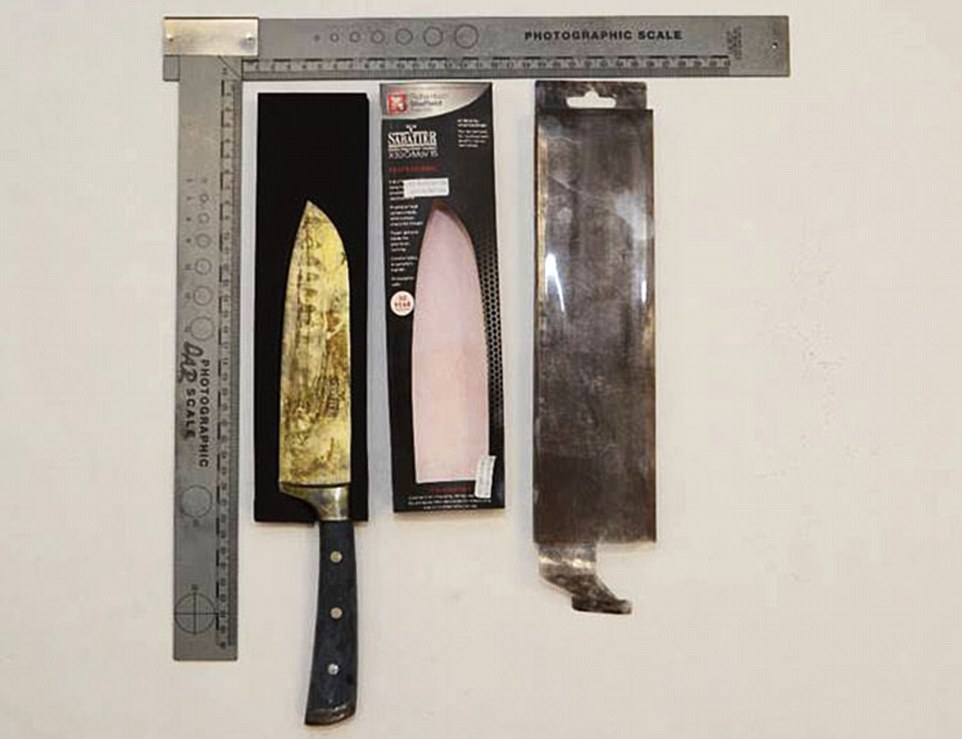 A post-mortem examination carried out on Saima showed the mother-of-four suffered numerous traumatic injuries that led to her death, including 68 stab wounds. The sheer number of her injuries meant all individual wounds could not be counted 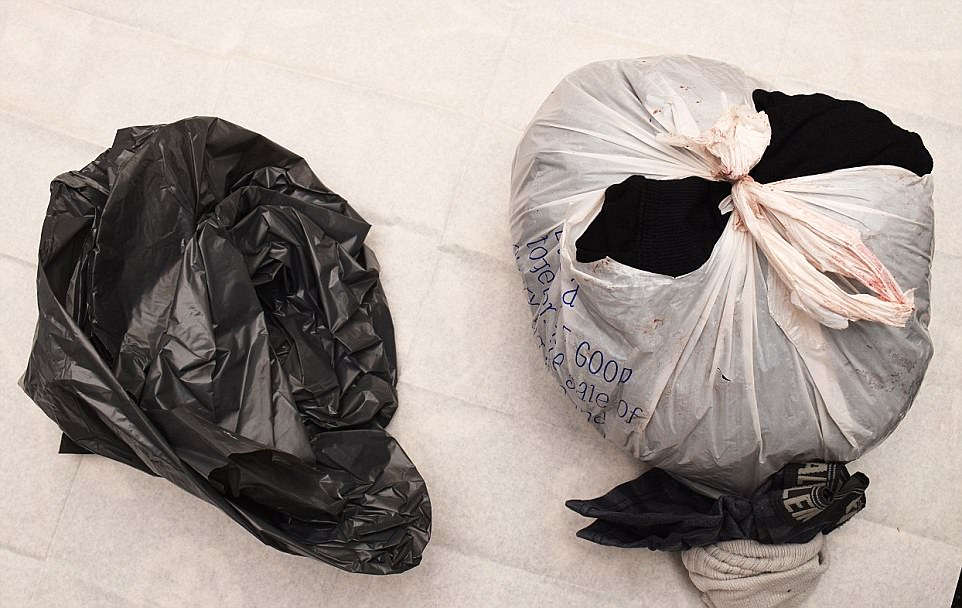 Detective Chief Inspector Adam Gallop said: ‘This was a brutal act of jealousy. Hearing the news that they were planning to leave the family home together was the final straw and Sabah took her sister’s life in a bitter envy’

Jo Sidhu, defending, said Sabah was a ‘lonely individual, had traits of mental health issues and had in the past cut and strangled herself.

Sabah showed no emotion as she was jailed for life with a minimum of 22 years for the ‘astonishingly brutal’ murder of her sister.

Judge Christopher Moss told her: ‘Not only did you intend your sister to die, but this was no spontaneous event.

‘You enticed her to come home from work so that the killing could be carried out.

‘You had decided that afternoon that murder weapon should be used which had been purchased by you days earlier. You have for some time planned your sister’s death.

‘The killing was astonishingly brutal and the knife attack continued on after the deceased must have lost her life.

‘You killed your sister in her own home with her children upstairs. Further, you suggested falsely that your sister had been engaged in an illicit affair with another man.’ 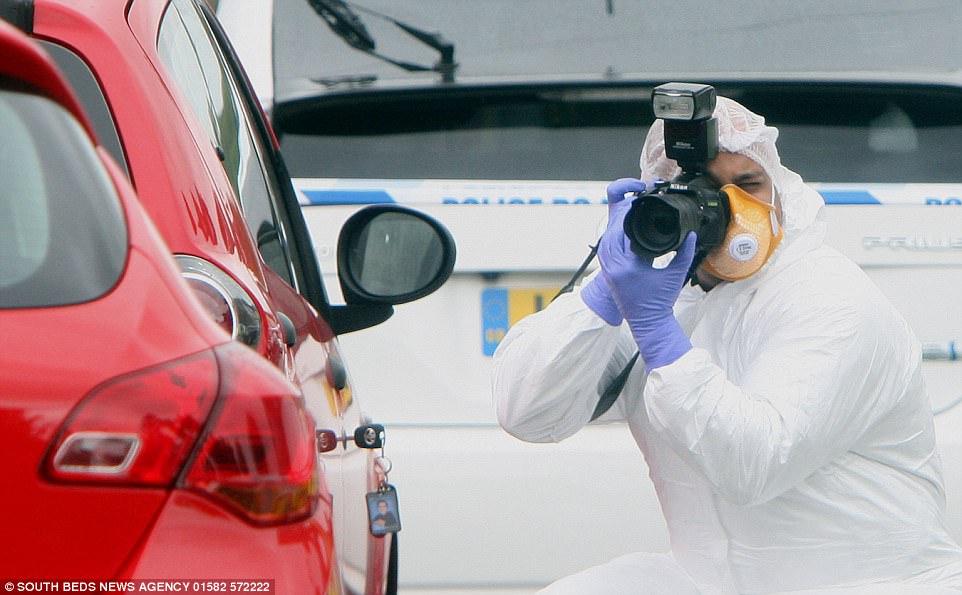 Saima, who was also a care worker, was found slumped in a pool of blood in the hallway of her semi-detached home in Luton at around 11.30pm on 23 May last year 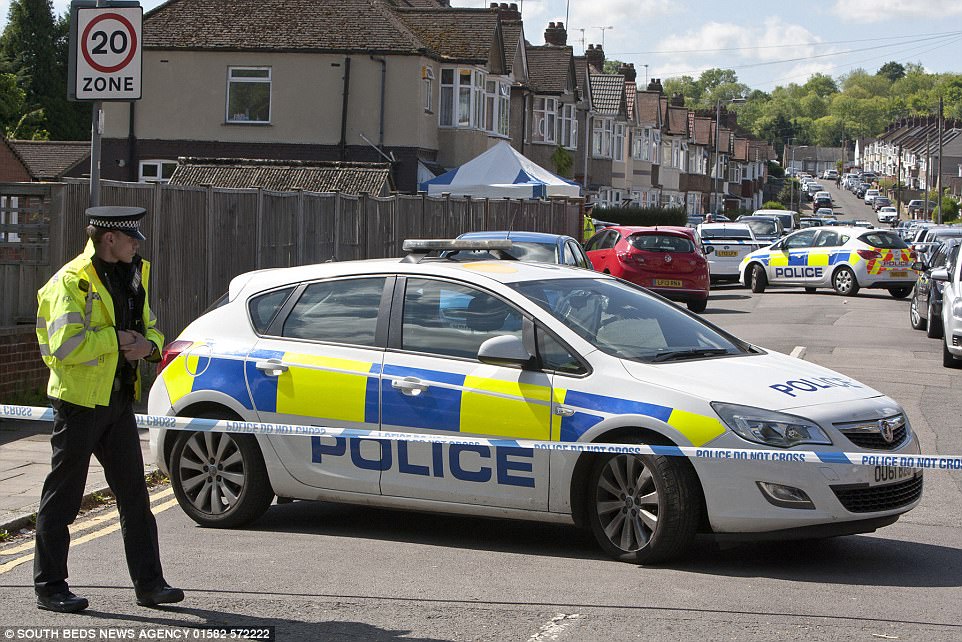 The community in Luton was left horrified by the savage murder, which detectives described as ‘any family’s worst nightmare’ 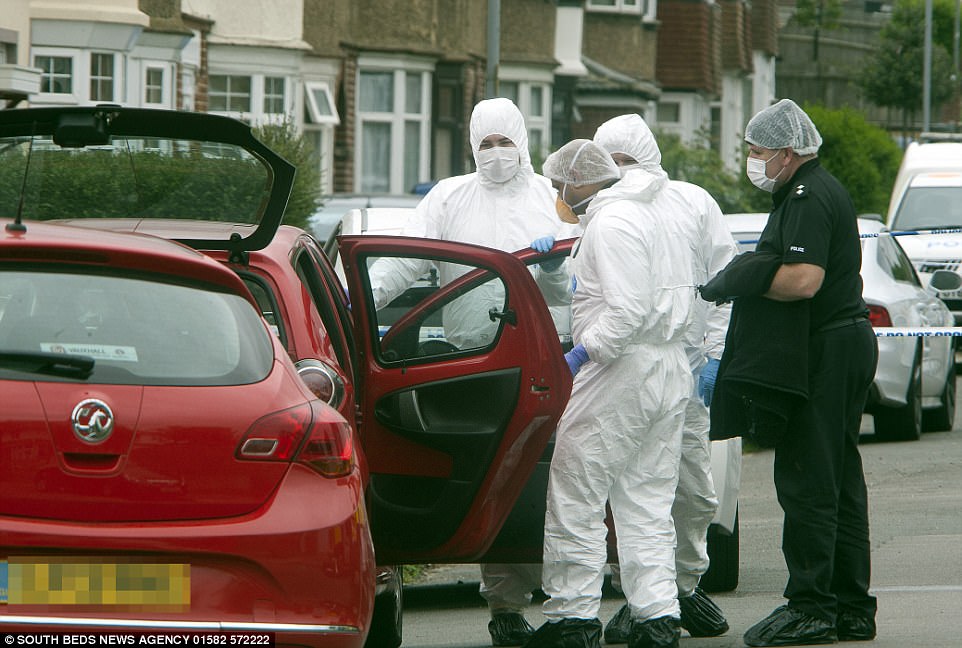 Detective Inspector Adam Gallop described the horrific murder as a ‘horrific crime’. Pictured, police at the Khan’s house in Luton

Judge Moss said Mr Rehman had been ‘somewhat manipulative’ during the relationship, which had caused Sabah ‘some difficulty in her personal life’.

Psychiatric reports revealed that Sabah was emotionally unstable and has a form of a depressive disorder.

An impact statement made by Hafeez Rehman was read out in court in which he said ‘My wife Saima was a lovely, caring and kind wife and mother.

‘I feel completely ashamed about my affair with Sabah. I know the affair should have stopped, but I never imagined anything like this would happen. Saima was such a good mum. I try my best with the children, but I can never replace their mum.’

Revealed: House of horrors where 27-year-old woman stabbed her sister to death goes up for sale

The house where Sabah Khan savagely hacked her older sister to death has gone on the market for £360,000.

The home, where the sisters lived with their parents and Saima’s husband Hafeez Rehman and their four young children, has now gone up for sale.

The semi-detached property is marketed as a ‘traditional’ home offering ‘spacious accommodation throughout and as the potential to be heavily extended’.

It is set in the Challney area of Luton, near the M1. 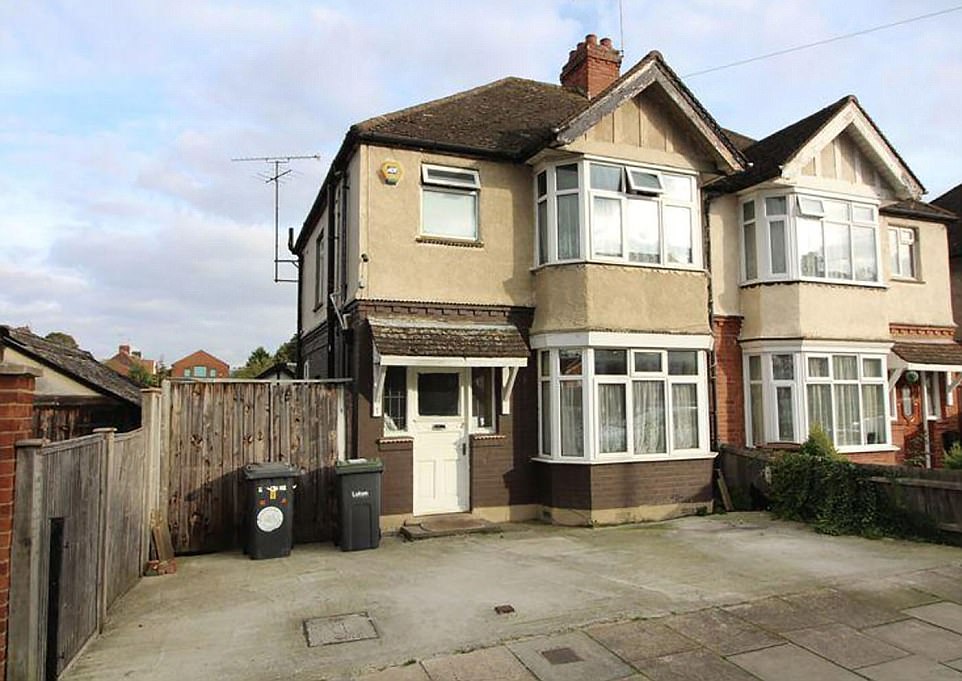 The home, where the sisters lived with their parents and Saima’s husband Hafeez Rehman and their four young children, has now gone up for sale