When Martin Parry received a call saying his wife Del had been hit by a car and needed life-saving surgery he was naturally distraught.

The caller said he was an NHS surgeon and that Mr Parry needed to hand over £300 before the operation could take place.

He sounded genuine and what made it more convincing was that it appeared that he was using Mrs Parry’s mobile phone.

Martin Parry with wife Del: ‘It was blind panic when I heard she was hurt and needed surgery’

But after her husband had transferred the money it quickly became clear that Mrs Parry had not been involved in an accident and that he had been conned.

The cruel fraudsters had used specialist technology to make it look like they were calling from her phone. The practice, known as ‘spoofing’, allows criminals to mask their identities and impersonate people.

Mr Parry, 47, said: ‘It was blind panic when I heard that my wife was hurt and I fell for it for two reasons: it was a call from her phone and the fraudster was so convincing about her injuries.

‘I have never been caught out on a scam before. I’m ex-military so I’m pretty clued up with things like this. But I fell it for hook, line and sinker because it involved my family. And if they can get me, they can get a lot of people, they can get anyone.’ 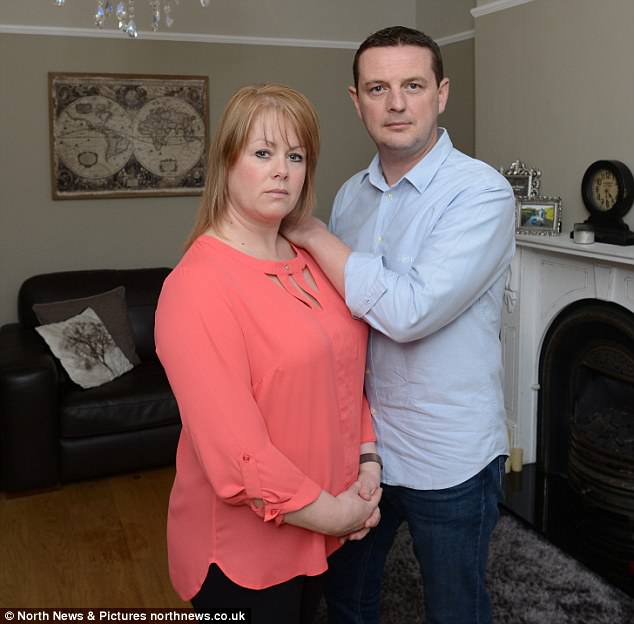 The scammer introduced himself as Dr Verma, a consultant at South Tyneside District Hospital in South Shields, which is ten miles from Mr Parry’s home in Whitley Bay.

He used medical terms and referred to 45-year-old Mrs Parry by her nickname, Del, an abbreviation of her middle name, Delyth.

Mr Parry, who served in the Royal Navy for 24 years before retiring in 2011 as a warrant officer weapons engineer, said: ‘I got a phone call from my wife’s phone – it came up with her name and number – at 4pm on Monday. 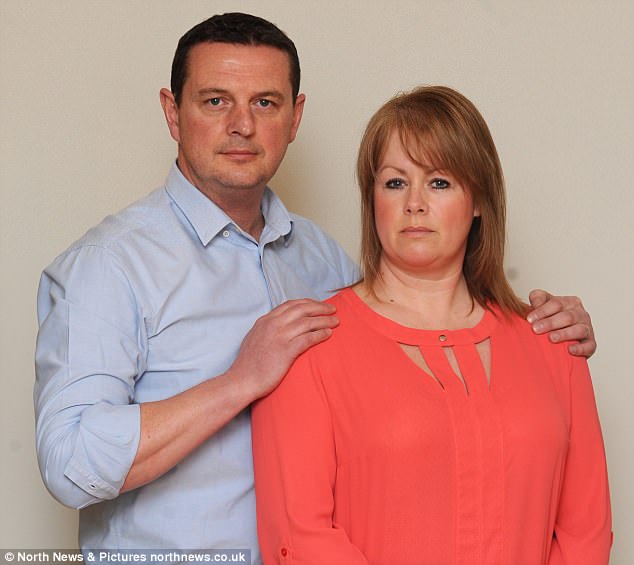 The scammer introduced himself as Dr Verma, a consultant at South Tyneside District Hospital in South Shields, which is ten miles from Mr Parry’s home in Whitley Bay

‘It was a man with an Indian accent and he asked, “Are you Martin Parry?” He also knew my date of birth and my address. He said, “Don’t panic but I have your wife Del here.” I fell for it is because she’s got a very Welsh name and Del is her nickname. I thought, “Bloody hell.” It was all fitting into place.

‘He said, “I’m a surgeon at South Tyneside Hospital and Del has been involved in an accident. She’s been hit by a car and we’ve stabilised her but she’s in intensive care.”

‘He said that she needs to go in for an operation as soon as possible because she’s got two compound fractures in her leg. After that she’d have to have skin grafts from the right leg to the left leg. 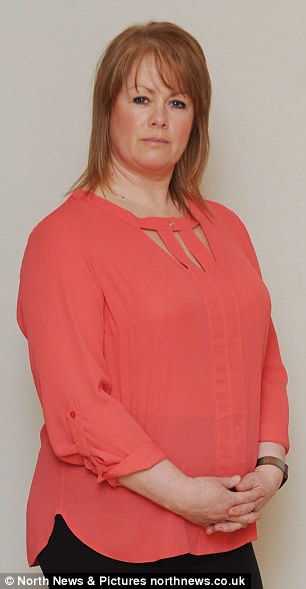 The bogus doctor used medical terms and referred to 45-year-old Mrs Parry (pictured) by her nickname, Del, an abbreviation of her middle name, Delyth

‘He was talking through all the procedures as if he was a doctor and it was bloody good. He said, “Don’t worry about the cost, the NHS will cover everything but you need to transfer £300 into the hospital bank account to cover the metal and rods that we will be putting in her leg.”’

The conman explained that it was ‘a paperwork exercise’ and that he would get the money back. Panicked, Mr Parry used online banking to transfer £300 to the fraudster’s account and then hurried to the hospital to be by his teaching assistant wife’s side.

He called relatives on the way to see if they could pick up the couple’s two children – Rachel, nine, and Jake, 11 – from school. He spoke to Rhiannon Williams, Mrs Parry’s sister, who said she was due to meet the couple’s daughter, Rachel, at a dance studio. Mrs Williams was in the dance studio and went outside to go and collect Rachel.

Mr Parry, a project manager in the safety industry, said: ‘Rhiannon ran out and lo and behold there was my wife, sat in the car on the phone to the same man. He had been saying the same thing about me. My phone had phoned my wife’s phone and the man said I’d been run over.

‘Rhiannon ran up to the car door saying, “What are you doing here? You should be in hospital,” and Del said, “No, Martin’s in hospital, he’s been run over.” And that’s when the guy put the phone down.’

Mr Parry reported the case to Northumbria Police, who told him it sounded like a data breach. The force passed the case on to Action Fraud, the UK’s national reporting centre for fraud and cybercrime.

A spokesman for Action Fraud said: ‘This type of scam, known as “number spoofing”, works by fraudsters cloning the telephone number of the organisation or person they want to impersonate and then making it appear on the victim’s caller ID display when they telephone them. The fraudsters will then gain the person’s trust by highlighting the number to them, claiming that this is proof of their identity, before trying to scam them in various ways.’

Mr Parry also called EE, his network provider, who said there was no evidence of a data breach from its end. A spokesman said: ‘Spoof calling is an industry wide issue and something all operators are working hard to address.

‘Caller ID spoofing happens when a fraudster acquires a wide range of personal details about the victim – often bought from criminal organisations or found online – and then uses specialist online tools and services to hide their identity or impersonate another person when calling. They then pose as someone else and ask for information or, as in this case, payment.’

Mr and Mrs Parry, who have been married for 22 years, have been left wondering how their personal information was leaked.

Mr Parry said: ‘I’ve never heard of a scam like this before and I don’t get shaken up very often but this one shook me up. I’m kicking myself now, how can I fall for this?’