A husband has been labelled ‘insecure’ and ‘controlling’ for scolding his wife after she undertook a ‘nude photoshoot’ to create a steamy photo album for him.

The man, believed to be from the US, explained in a Reddit post that his spouse had presented him with a booklet ‘of some fantastic photos of her’.

But despite first being happy with the unexpected gift, the husband’s excitement soon turned to annoyance when the wife admitted she was snapped in the provocative poses by a male photographer.

And when the husband suggested that she should’ve talked to him before booking the nude photoshoot, the wife stormed out of their home for a run.

Some social media users said the husband was being ‘insecure’ and should just be happy with the gift, while others suggested the wife had ‘crossed a boundary’ and he had every right to be upset by it.

A husband, believed to be from the US, explained in a Reddit post yesterday that his spouse had presented him with a booklet ‘of some fantastic photos of her’ (stock photo) 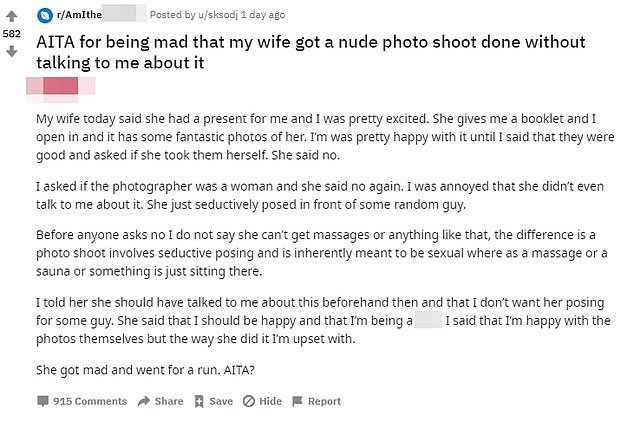 But despite first being happy with the unexpected gift, the husband’s excitement soon turned to annoyance when the wife admitted she was snapped in the provocative poses by a male photographer. Pictured: The husband’s post on Reddit

Taking to Reddit, the husband asked: Am I the a****** for being mad that my wife got a nude photo shoot done without talking to me about it?

‘My wife today said she had a present for me and I was pretty excited. She gives me a booklet and I open in and it has some fantastic photos of her.

‘I was pretty happy with it until I said that they were good and asked if she took them herself. She said no. I asked if the photographer was a woman and she said no again.

‘I was annoyed that she didn’t even talk to me about it. She just seductively posed in front of some random guy.’

He continued: ‘Before anyone asks, no I do not say she can’t get massages or anything like that, the difference is a photo shoot involves seductive posing and is inherently meant to be sexual where as a massage or a sauna is just sitting there.

‘I told her she should have talked to me about this beforehand and that I don’t want her posing for some guy. She said that I should be happy and that I’m being a d***.

‘I said that I’m happy with the photos themselves but the way she did it I’m upset with. She got mad and went for a run.’

One individual wrote: ‘Stop being so controlling. Your girlfriend surprised you with some sexy snaps, and all you can focus on is who took them? Get over yourself mate.’

‘Not even his girlfriend, his wife. Dude’s pretty damn insecure, to be sure,’ another person added.

A third said: ‘Stop worrying about professionals doing their job, your wife tried to do something nice for you. If she was posting the pictures and book to your friends and stuff, then you can worry. But right now, you are overreacting.’

However, one person said: ‘She crossed a standard boundary within most relationships. He’s allowed to be upset/insecure by it. If the roles were reversed, I guarantee you’d be singing a different tune.’

Another added: ‘While the wife was trying to do a nice thing, it’s also understandable why a husband would be peeved that he wasn’t even told that his wife was posing nude in front of another man.’